Recent news and updates related to the ocean and air freight market for the week of September 21, 2017. 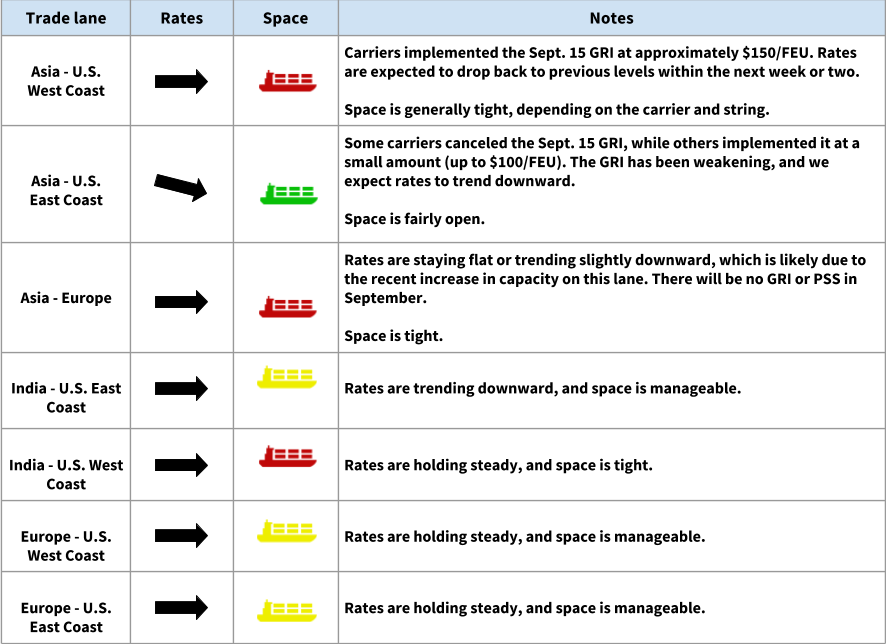 Rates are gradually returning to pre-peak levels, or, in the case of Asia - U.S. East Coast, dropping slightly below previous levels.

East Coast rates are likely to stay down

We expect that East Coast rates will remain weak. More capacity has been added to the East Coast, and with the completion of the Bayonne Bridge project, larger ships will now be calling the Ports of New York and New Jersey.

West Coast rates will return to previous levels, but they have held stronger throughout peak season. Unlike the East Coast, no new capacity was added on the West Coast, and space has stayed much tighter, which has kept rates up.

Book your shipments before Golden Week

China will celebrate Golden Week October 1-8. During Golden Week, factories will be closed. Carriers have announced many blank (i.e., canceled) sailings for the week after.

If you’re shipping via ocean and want your cargo to arrive in time for the winter holidays, be sure to book your shipments prior to Golden Week. Read more about how to prepare for Golden Week here.

International air cargo market demand growth continues to outpace supply, which is keeping rates up. “All year, we have had a peak season….”

Amidst a climate of strong global economic growth, e-commerce continues to expand. Many tech products are launching, which will take up a lot of valuable space -- especially the iPhone, which will further constrain capacity out of Shanghai.

We expect to see rates go up after Golden Week (October 1-8). Demand will be high leading up to the winter holidays, so we encourage you to share your air forecast with your Flexport team now.

Construction continues to cause lengthy rail delays at the Port of Prince Rupert. This is mostly impacting cargo traveling via Canada to the inland U.S.; dwell time is averaging about 10 days.

Congestion and chassis shortage in Houston

Port Houston is still working through its post-Harvey backlog, which is tying up container drayage capacity in the region. This shortage is compounded by peak-season volumes for large retailers.

In addition, distribution centers in and around Houston are holding on to chassis and containers for longer periods because of increased inbound shipments. This reduces the overall available chassis pool for drayage carriers.Be aware that, if you are routing cargo via Houston, you may experience continued delays, trucking wait fees, and/or chassis split fees.