Health, Happiness and Bottlenecks - The State of Trade in 2022

After another tumultuous year, global supply chains face one of three challenging scenarios in 2022. A continued economic boom and COVID challenges mean continued logistics disruptions. A reversal in consumer demand would help clear the ports but is unattractive economically. More-of-the-same looks unlikely given the conditions necessary.

This report looks in depth at the development of global trade in 2021—particularly with regards to logistics operations—before looking ahead to three potential scenarios for 2022. In each case we enumerate the key assumptions for the development of health, consumer spending plans and the state of global logistics networks.

The scenarios are based on Flexport’s State of Trade webinar held on Dec. 1. We also provide scenario-agnostic suggestions for firms looking to deal with uncertainty in their supply chains.

The defining characteristic of global trade in 2021 has been a long surge in demand for consumer goods. That’s been driven in part by accomodative monetary and fiscal policy as well as continued consumer preferences for goods, as discussed in Flexport’s research from Nov. 5. 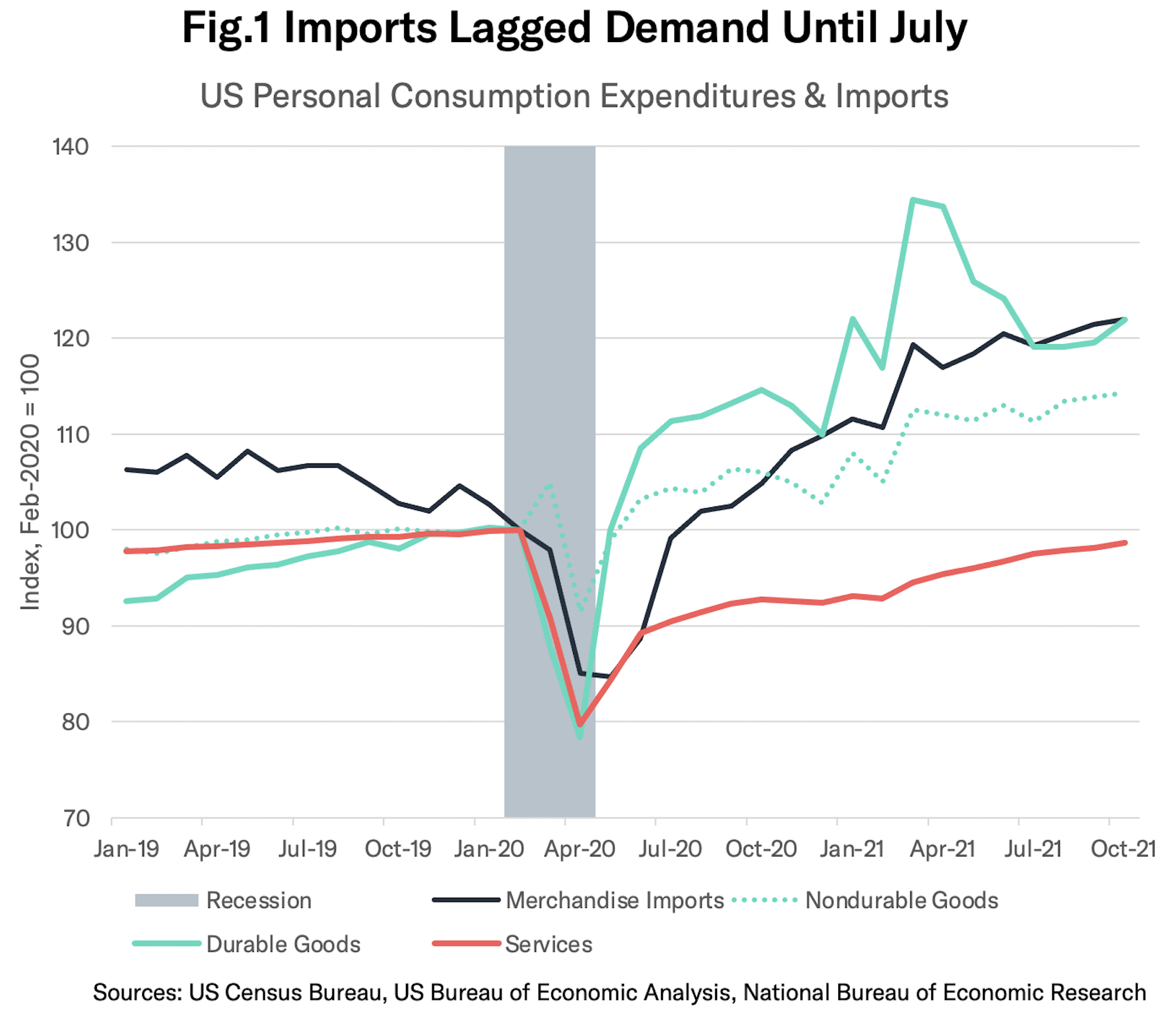 As shown in Figure 1 there was a marked shift in spending from services towards goods after the pandemic-inspired recession. Consumer durable goods grew fastest and as of October 2021 spending was 24% higher than the same period of 2019 while services spending is still 2% lower.

The surge in demand for goods has resulted in an elevated level of merchandise imports, which as of October 2021 were 19% higher than 2019 levels. That in turn has generated additional demand for logistics services and put a strain on both supply chains and logistics networks.

A variety of other circumstances have put stress on supply chains and logistics networks, which cannot readily add capacity within a 12-month period.

The continued presence of COVID-19 takes a toll on workforces while “zero-COVID” policies can lead to rapid and harsh port and factory closures. Exogenous factors such as the Suez Canal blockage, storms, floods, vessel fires and labor action are ever-present too.

It’s not a surprise that bottlenecks have emerged throughout supply chains. 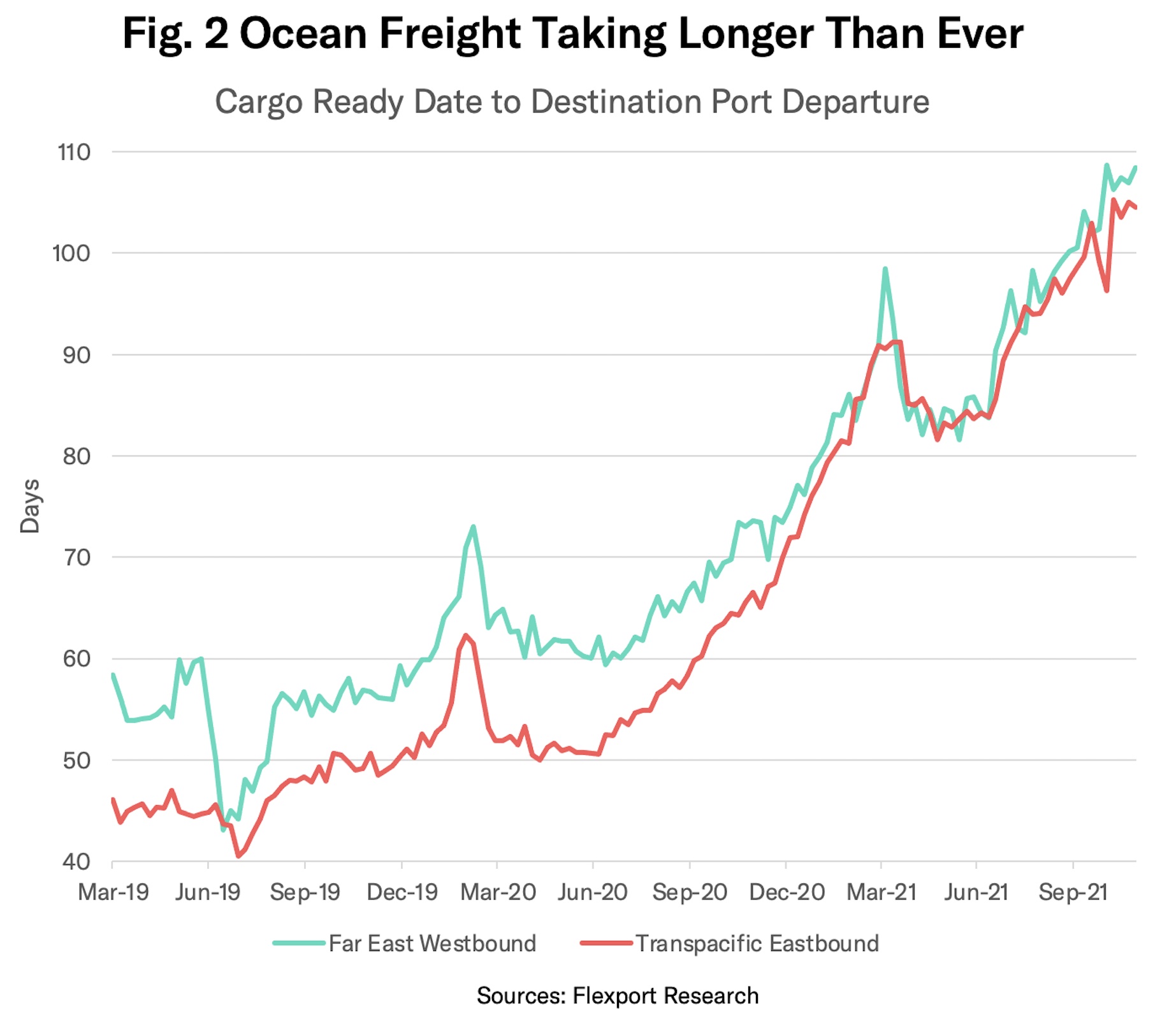 Despite attempts in October by the Biden administration to unclog U.S. West Coast ports there is still evidence that logistics networks remain congested. Figure 2 shows the Flexport Ocean Timeliness Indicator.

Looking ahead to 2022, three potential scenarios present themselves:

While “more of the same” is a common expectation for year-ahead predictions, supply chains are already in an equilibrium state of turbulent flow. That means demand needs to remain stable, if slightly below current levels, while no new shocks in terms of network operations, government policy or health conditions occur. 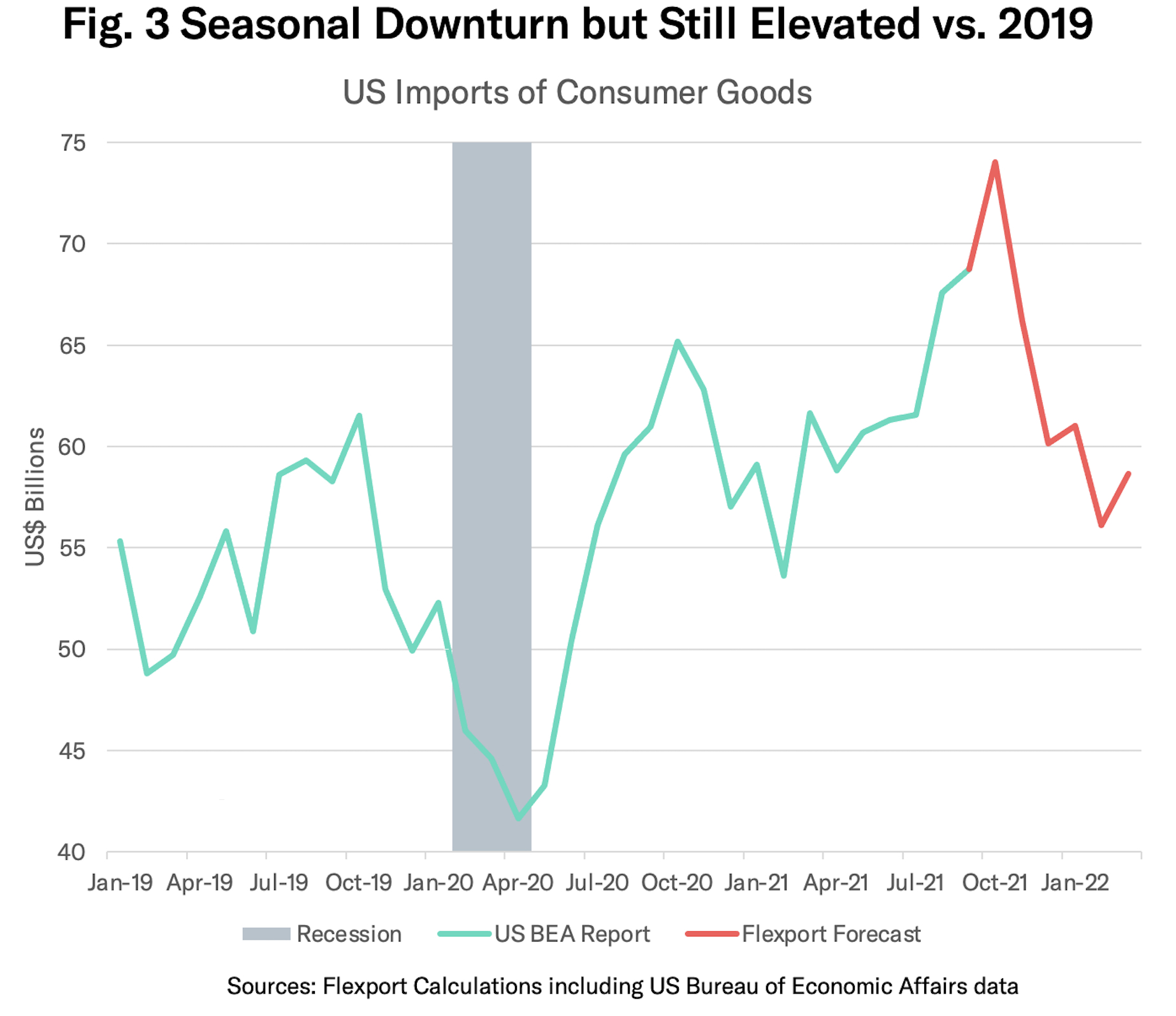 Flexport’s Post-Covid Indicator suggests that the balance of spending on goods versus services will remain tilted toward goods, at least through year end. That will likely support continued elevated levels of imports, although not at higher levels than they currently are.

The application of normal seasonality suggests U.S. imports in Q1’22 will decline by 12% versus Q4’21 while still being at similar levels to Q1’21, according to Flexport’s Trade Activity Forecast shown in Figure 3.

On the supply side, a wave of recently ordered shipping vessels and port expansion plans are unlikely to make a difference within a 12-month timeframe. Instead there’s a need for further adjustments to working practices—requiring higher market prices or public policy—to clear the existing backlog of vessels and containers at ports.

There is a risk that slower logistics operations become a new-equilibrium until either a marked reduction in demand, a significant boost in efficiency or the delivery of new assets occurs.

If demand remains elevated or climbs even further, then the logistics industry’s susceptibility to cascading problems caused by exogenous events increases. Indeed, if demand remains at elevated levels the level of congestion measured by the OTI may climb further.

Aside from the evergreen risks from geopolitical tensions which could have a global impact, there are union negotiations on the U.S. West Coast due later in the year. 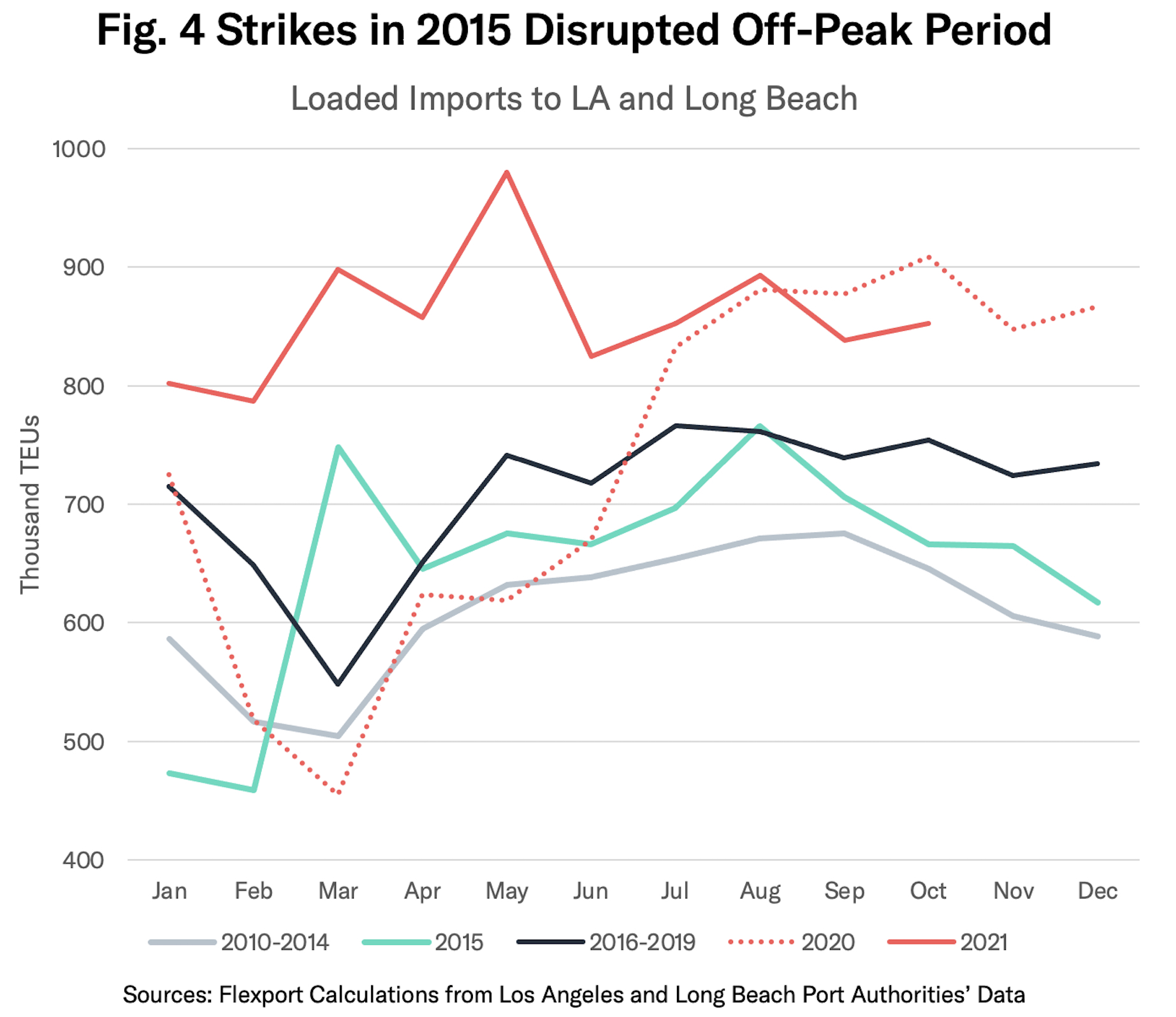 Figure 4 shows the impact on seasonal imports to the ports of Los Angeles and Long Beach during the strike of early 2015. Clearing the backlog created in January and February pushed imports in March up by 48% year over year, or around 240,000 TEUs.

Similar disruptions in 2022 may take longer to clear given the ports have been operating at around 850,000 to 900,000 TEUs per month, potentially close to capacity, on the back of existing demand.

Continued West Coast disruptions may lead companies to start to consider permanent strategies such as using the Panama Canal or shipping via Mexico, raising both costs and delivery times.

There are effectively two flavors of this scenario. On the one hand, if the economy remains healthy then a shift back to services spending cuts demand for goods, allowing networks to recover within a few months.

On the other, business failures and a recession slash spending on both. While logistics systems can recover, they may face greatly depressed demand heading into 2023.

What Can Companies Do?

The conditions for any of the three scenarios are difficult to determine currently. Around two-thirds of respondents to a recent poll said the difficulty and cost of moving goods is the main concern for their business. It’s therefore worth asking what scenario-agnostic actions firms can take.

The options range from the tactical to the strategic. A few congestion-related examples include:

Ensuring suppliers’ factories are ready to deliver their product on time. Around 30% of bookings pre-pandemic had been cancelled due to late availability of cargo. That in turn led carriers to overbook their vessels, leading more latterly to challenges with space availability.

Similarly, be prepared for new types of contracts that include mechanisms that reward customers that are reliable—in terms of not cancelling, fulfilling contract terms etc.—with better rates or improved access to expedited services.

Ensure that containers are fully loaded to capacity. Failing to do so is both a waste of money for the shipper and a waste of capacity for the industry at large.

Access and understand your data. Be attuned to where the bottlenecks are, whether that be at ports, on shipping vessels or other modes of transportation including ports or trucks.

Whether logistics network congestion clears in 2022 or later, these measures and others can help you make your supply chain as efficient as possible.__ As always, Flexport is here to help.__