Flexport’s Trade Activity Forecast augments traditional economic techniques for predicting U.S. merchandise imports and exports with Flexport’s proprietary data. In the latest update we expect imports to dip a bit more on a real (i.e. inflation adjusted), balance of payments, seasonally adjusted basis in December after a very sharp fall in November (6.9% in a month). That will lead to a slow, wavering recovery that still won’t get to the lowest monthly levels of the year through October. Exports also fell in November, but much less sharply (2.4%) and are forecast to resume steady growth with a 0.7% rise in December.

The Methodology: The Flexport Trade Activity Forecast combines traditional economic statistics alongside Flexport’s proprietary data and analysis to generate a forecast of US merchandise import and export trade growth. The use of additional data has been particularly important since the advent of the pandemic and resulting shift in trade patterns away from historic averages. See our primer report for more details.

Update January 18, 2023: The central version of Flexport’s Trade Activity Forecast presented here is a balance of payments version with seasonal adjustment (BOPSA) and correction for inflation. This best answers the question of whether this sector of the economy is performing better or worse than one would expect for a given time of year. The website also offers a Census, non-seasonally adjusted version better suited for users looking for a guide to activity within supply chains on a short-term basis. When adjusting for inflation, this captures the unadulterated forecast of how many goods are expected to cross U.S. borders compared to a year earlier. 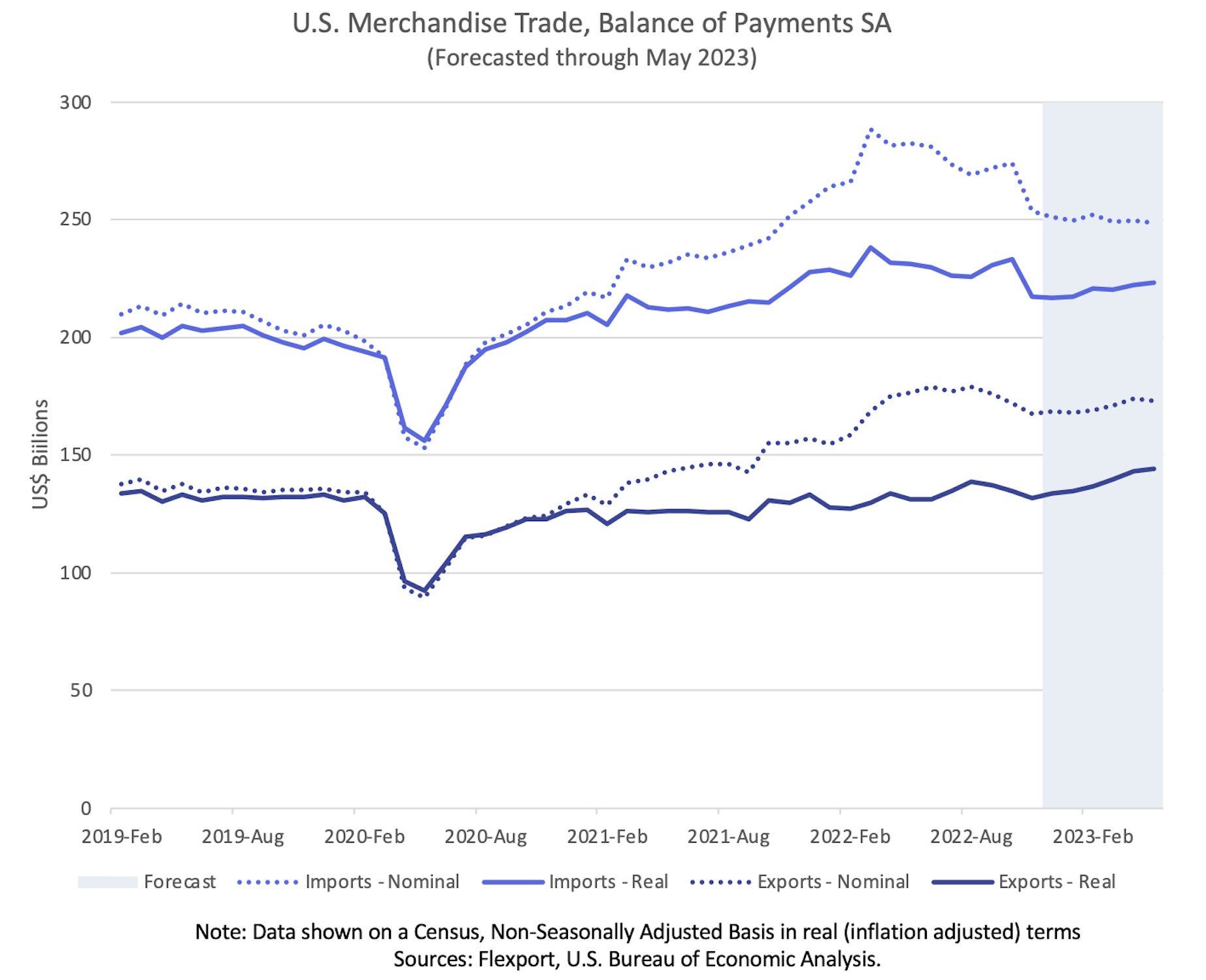 Figure 1 shows both real and nominal values for imports and exports, dating back to the start of 2019. The nominal (dotted) figures mostly serve to illustrate how misleading unadjusted numbers can be. We’ll focus here on the real (solid) values.

The implied negative net export balance (aka trade deficit) is expected to be $267 billion in Q4’22 and then fall further to $247 billion in Q1’23. That compares to $308bn in Q1’22, which should serve to augment GDP estimates. 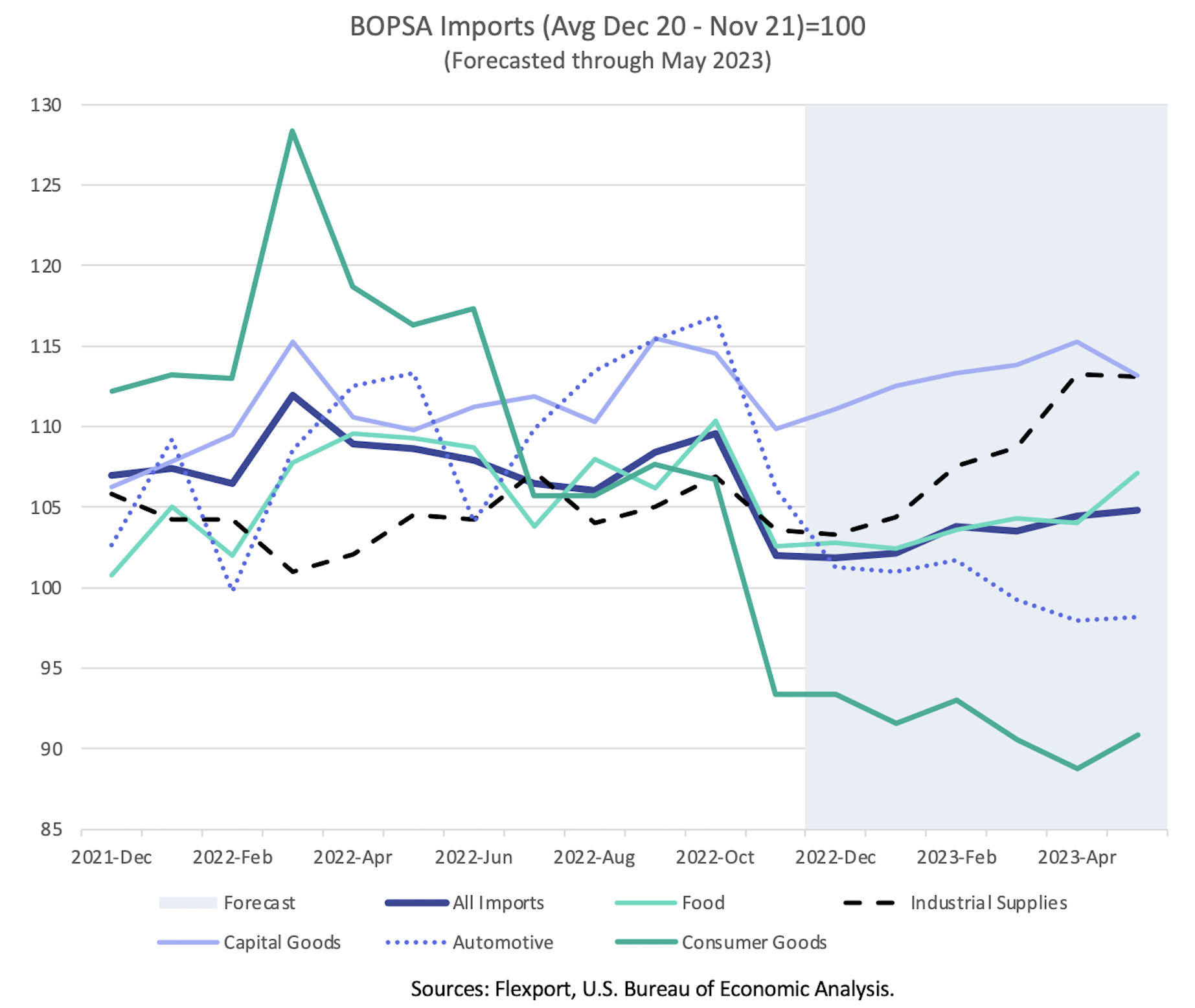 The relative calm of overall US imports (the dark, thick line in Fig. 2) conceals substantial turbulence within the major subcategories. Although the subcategories vary a great deal in terms of volume of trade, the figures are rebased so that the average value of the year before the first forecast date – November 2022, in this case – is set to 100. This is a different approach from past releases and is meant to prevent the graphs from showing sharp changes simply because of base month effects.

Food imports track overall imports fairly closely, ending the forecast period in May up 4.4% from its depressed November level. The other major categories split sharply. Industrial Supplies imports rise to 9.2% above their November levels, while Capital Goods, which did not fall as sharply, end up 3.1% above November. In contrast, Autos continue a decline to 7.5% below November levels. Consumer Goods only fall a further 2.6%, but from seriously depressed levels. The seasonally-adjusted April 2023 figure forecast for Consumer Goods imports is the lowest since July 2020. 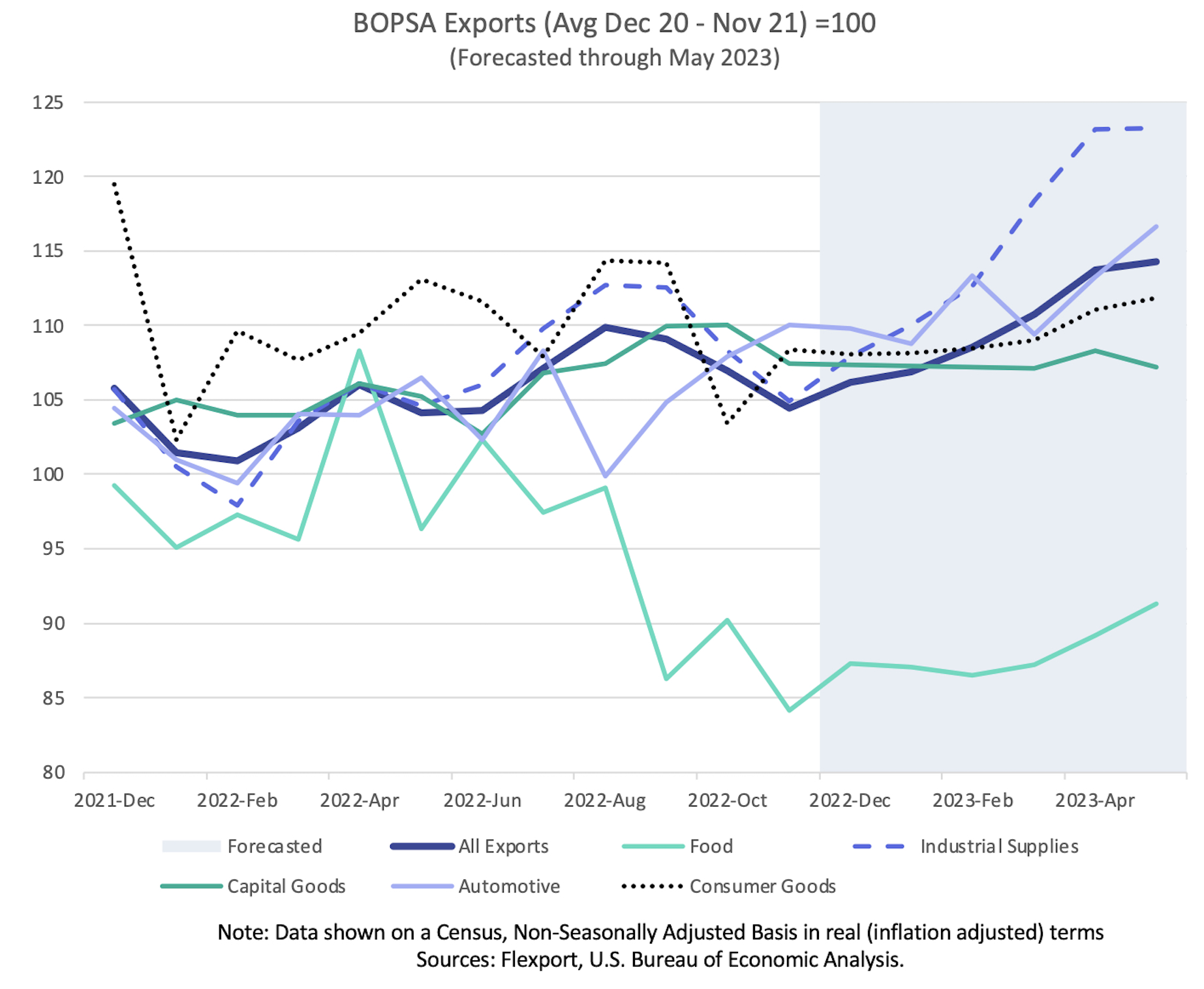 Figure 3 conducts the same exercise for exports, looking at percentage changes from the year to November 2021. For exports, there’s a clear laggard: Food. While the category is expected to show reasonably strong growth over the forecast period – 8.5% – the November 2022 import level was the lowest monthly level since before 2019.

The fastest forecast export growth through May is in Industrial Supplies, up 17.4%. Capital Goods exports, by contrast, are the only category forecast to shrink over the period, by 0.2%.

The US Census Bureau will publish December 2022 data on February 7, 2023. Data for January will be released on March 8. The next update of the Flexport Trade Activity Forecast is scheduled for February 18, 2023.