Ocean and air freight rates and trends; trucking and customs news for the week of September 4, 2019. 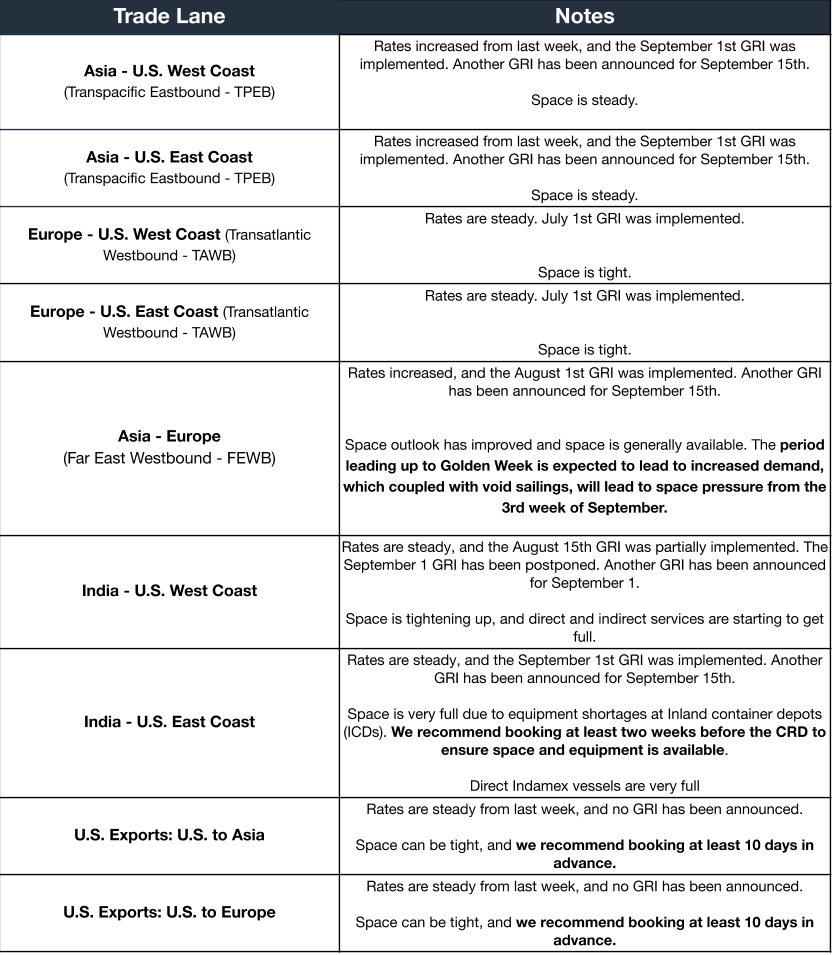 Hurricane Dorian Forces Port Closures Although it has yet to make landfall in the United States, Hurricane Dorian has caused some eastern ports to close after causing significant damage in the Bahamas. The storm is continuing to progress northward, but much of the eastern seaboard is out of the direct path of the storm. Regardless, ports along the coast of Georgia, the Carolinas, and Virginia have taken preventive measures, which could cause significant delays in the days and weeks ahead.

Hong Kong Protests Continue to Disrupt Air, Rail, and Truck Freight Ongoing protests in Hong Kong have already suspended air freight departures out of Hong Kong International Airport. But now, according to The Wall Street Journal, disruptions are extending to include the city’s subway system and other vital infrastructure. 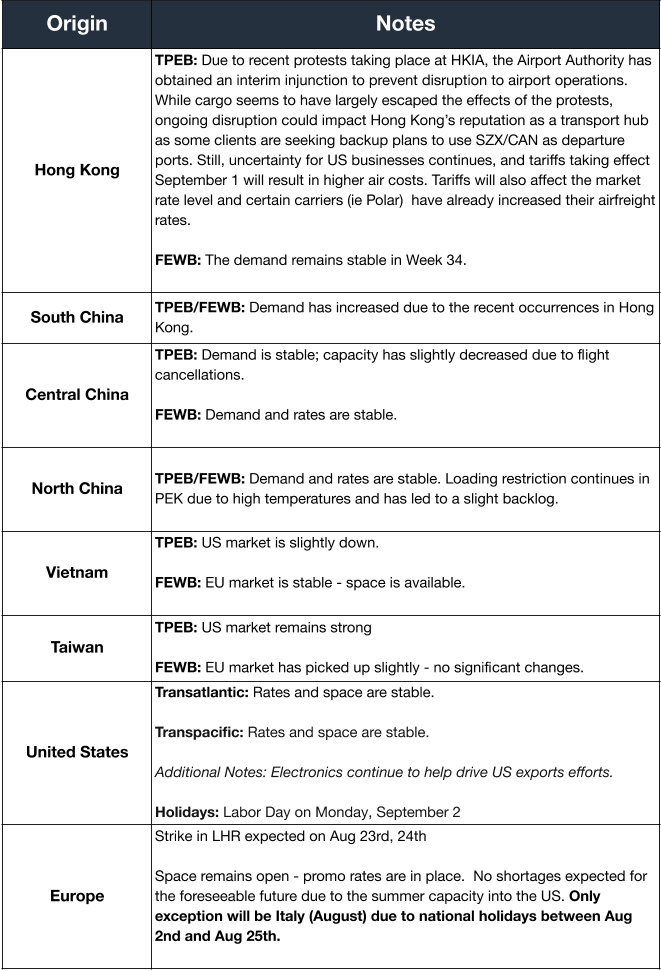 Section 301 Changes Official On Friday, August 30th a Federal Register notice confirmed that the new Section 301 list 4a will be implemented at 15% instead of the originally proposed 10% which went into effect on September 1st. List 4b will also officially go to 15% and will go into effect on December 15th. A second Federal Register notice released on September 3rd stated that the tariffs on lists 1, 2, and 3 will rise from 25% to 30%. This change will go into effect on October 1st. An open written public commenting period will begin on September 20th. During this time, businesses and trade groups have the opportunity to explain if the increases on their particular products will cause harm to the U.S.

EPA Issues First Penalty for TSCA Title VI The EPA has issued its first penalty for violations of the TSCA Title VI rule. The EPA has settled with Global Sourcing Solutions for the amount of $544,064, and the company has agreed to take corrective actions to come into compliance with the regulations. The EPA found them guilty on eight entries and 42 violations. Since violation disclosure was voluntary after the company realized cabinets were made to European formaldehyde emission standards but were shipped to the United States, the EPA showed some leniency on the fine and time allotment to correct the issue going forward.

Scheme Uncovered Avoiding $1.8 Billion in Anti-Dumping China Zhongwang Holdings Limited is China's largest aluminum extrusion company and they are being charged with avoiding the aluminum extrusion antidumping and countervailing duties in the amount of $1.8 billion. The company spot-welded the extrusions to make them appear as "aluminum pallets" then shipped them to the U.S. and paid duties on the goods as if they were finished when, in fact, none of them were functional pallets or going to be used as pallets. These extrusions were imported through Los Angeles and Long Beach then sold to buyers of the extrusions. The company also created false documentation by selling to "independent" buyers that turned out to be entities that were controlled by the CEO showing they blatantly falsified documents.