How DHL Pioneered the Sharing Economy

DHL, the international express delivery company, started its business by offering free plane tickets to people on the street. For the trouble of giving up their baggage allowances, passengers were handed a free round trip plane ticket to Hawaii.

Founded as a courier service in 1969, DHL used the spare capacity in travelers’ luggage to transport high value documents. To understand why it made sense for DHL to provide free tickets to travelers, it helps to understand the massive changes entailed by the containerization of ocean cargo in the 1960s.

First implemented in the mid-1960s, the ocean container dramatically improved the efficiency of international shipping. But containerization also brought about an unexpected downside: When goods are shipped by sea, a piece of paper known as the “original bill of lading” must serve as title to the merchandise. Created by the manufacturer overseas, this piece of paper must be delivered to the purchaser in the destination country.

The massive capacity of containerized ships meant that many more shipments would arrive in ports in a much shorter span of time. That was a problem: The documents necessary to clear cargo arrived much later than the cargo did. Goods started piling up in ports, frustrating everyone: importers, truckers, and port terminals.

That’s where DHL came in. The company offered businesses the chance to transport documents by air. No, it didn’t invest in airplanes then. Instead, it found people who were willing to carry documents in their luggage in exchange for a free plane ticket. Waiters, secretaries, and professors were sent on red-eye flights from San Francisco to Honolulu if only they would carry suitcases stuffed with these bills of lading. Once these high value documents were on the ground, the company’s network of local couriers would take responsibility for delivering them to clients.

The system worked amazingly well. The postal service then was notoriously slow and unreliable. By taking important documents and putting them in suitcases, DHL was able to guarantee timely delivery of critical business documents.

It’s no surprise that DHL started with service from San Francisco to Honolulu: It was the most active tradelane of Matson, one of the first shipping lines to adopt standardized ocean containers. Couriers from DHL helped businesses avoid the unreliable postal monopoly so that goods could clear more quickly through the ports. People on the mainland suddenly found that their documents could be delivered before their offices even opened.

DHL soon expanded to other tradelanes, building a worldwide network that was especially prominent in Asian to U.S. air delivery services. Eventually it became a multi-billion dollar business that was acquired by Deutsche Post, helping to create what is now the largest courier service in the world (and ironically a former postal monopoly, before it was privatized by the German government). 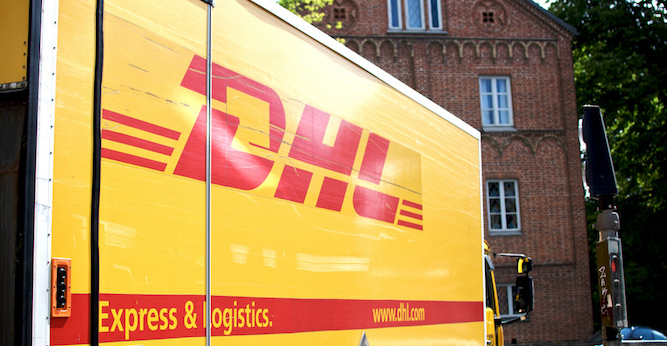 That’s how DHL was a pioneer in the sharing economy long before the term was invented. People who wouldn’t otherwise fully use their luggage capacity would trade off that space to people willing bid for it. Given that it skirted the postal monopoly, you might even refer to DHL’s original model as “smuggling as a service.”

Eventually DHL caught the attention of the now-defunct Civil Aeronautics Board. The company won these challenges in a United States Court of Appeals for the Ninth Circuit ruling. Two FBI agents sent to investigate DHL were convinced that it was a legitimate enterprise—and then promptly became couriers themselves.

An industry little changed even now

DHL developed a brilliant hack to solve an archaic problem. The company found a cheap, scalable solution to deal with obstacles and built a multi-billion dollar business in the process.

It also saw that containerization brought a new challenge to importers: They didn’t want to wait for their shipments to clear simply because paperwork took too long to arrive. Nobody likes an obstruction, but having a bureaucratic one is especially galling. Did the unreliability of the postal service mean that everyone had to wait around doing nothing while port charges racked up? Surely we’ve figured out a better way to clear goods today.

As it turns out, we really haven’t. Businesses still need an original bill of lading to securely collect goods from port terminals. It’s an incredibly outdated system—starting with its very name. “Lading” is a British term for “loading” that dates back to the Tyndale Bible of the 16th century. Bills of lading used to be tradable goods in Britain. This was an innovation 400 years ago: You could sell a bill of lading in a marketplace, rather than having to transport the goods there. Little has changed in the last few centuries. When truckers come to pick up goods in the terminal, they still need to present the original bill of lading to get the port to release goods.

In a world with the Internet, cryptography, and the blockchain, shouldn’t there be a better way to enable the secure release of cargo internationally? Surely technology will solve this problem, and the engineers at Flexport are working tirelessly to enable a new standard for releasing cargo securely, without needing paper documents to be flown across the ocean. Until then, let’s take a moment to appreciate DHL’s innovation and its relevance to conversations about the sharing economy.