Let’s start with a chart. This week, it’s the US Dollar Trade-Weighted Index.

After an initial strong appreciation with the onset of the pandemic, the US dollar has generally depreciated against the currencies of major trading partners. 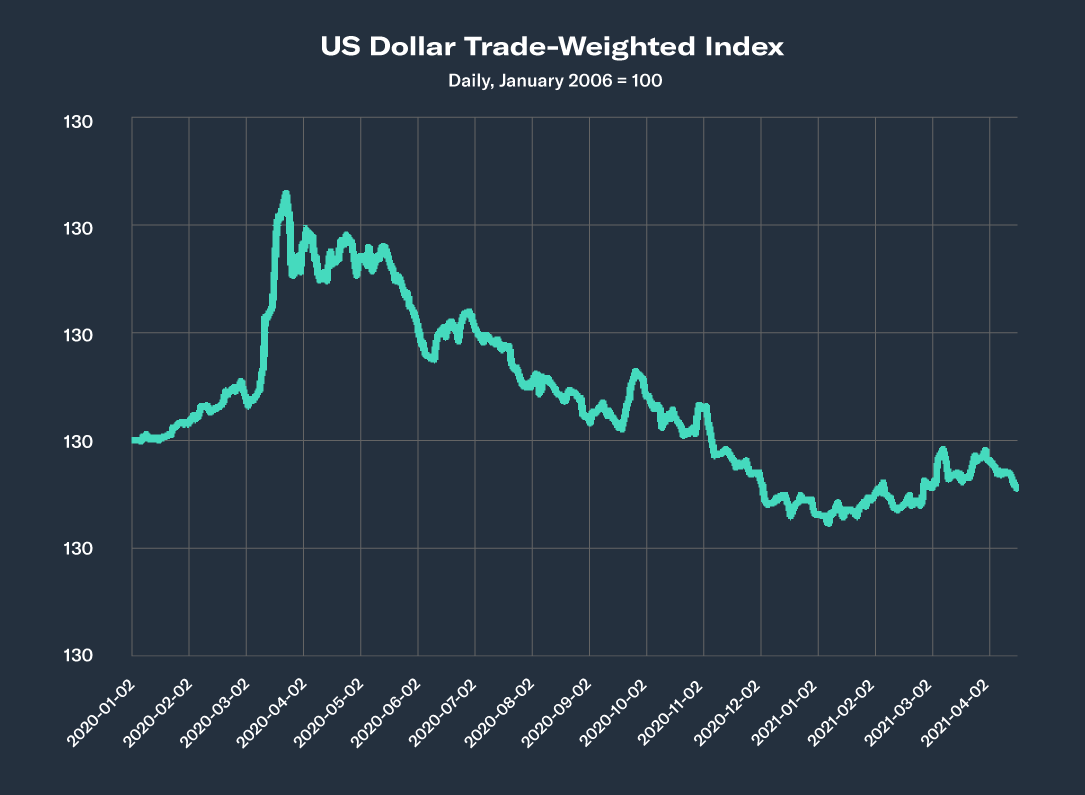 Source: St. Louis Fed FRED and Board of Governors.

The depreciation is puzzling in some ways. While the pace of US economic recovery has been slower than that of China, the recent IMF World Economic Outlook forecast US GDP growth to be faster than all advanced economies except Spain, which was tied with a 6.4% forecast growth rate.

Further, the yields of some key US bonds have been steadily rising since last summer. These factors would normally strengthen a currency. The key countervailing force pushing for depreciation is likely the US Fed commitment to higher US inflation.

The US initial unemployment insurance claims figure was 547K, the lowest since March 14, 2020.

National Debts Are on the Rise

In both the US and the Euro Area, aggressive fiscal measures have pushed up debt as a share of GDP.

US Business Exits Are Better than Expected

US business failures are not as bad as feared, according to a Fed study. While official data arrives with a substantial lag, preliminary data suggest high levels of exit were concentrated in very small firms in specific industries and did not represent a large share of US employment.

Looking ahead, exit expectations were below historical rates in most industries.

The European Central Bank met and announced it would maintain its policy rate at -0.5% (in place since Sept. 2019) and its heightened rate of bond purchases. ECB President Lagarde said Q2 economic performance looked better than Q1, but highlighted uncertainty.

While the Biden administration suspended aircraft-related tariffs last month, it has left Trump steel tariffs in place. This past week, Harley-Davidson announced it would face broader EU tariffs as a result. President Biden announced he would travel to the UK and Belgium in June, allowing talks on such matters.