Let’s start with a chart. This week, it's Euro Area External Trade in Manufactured Goods. 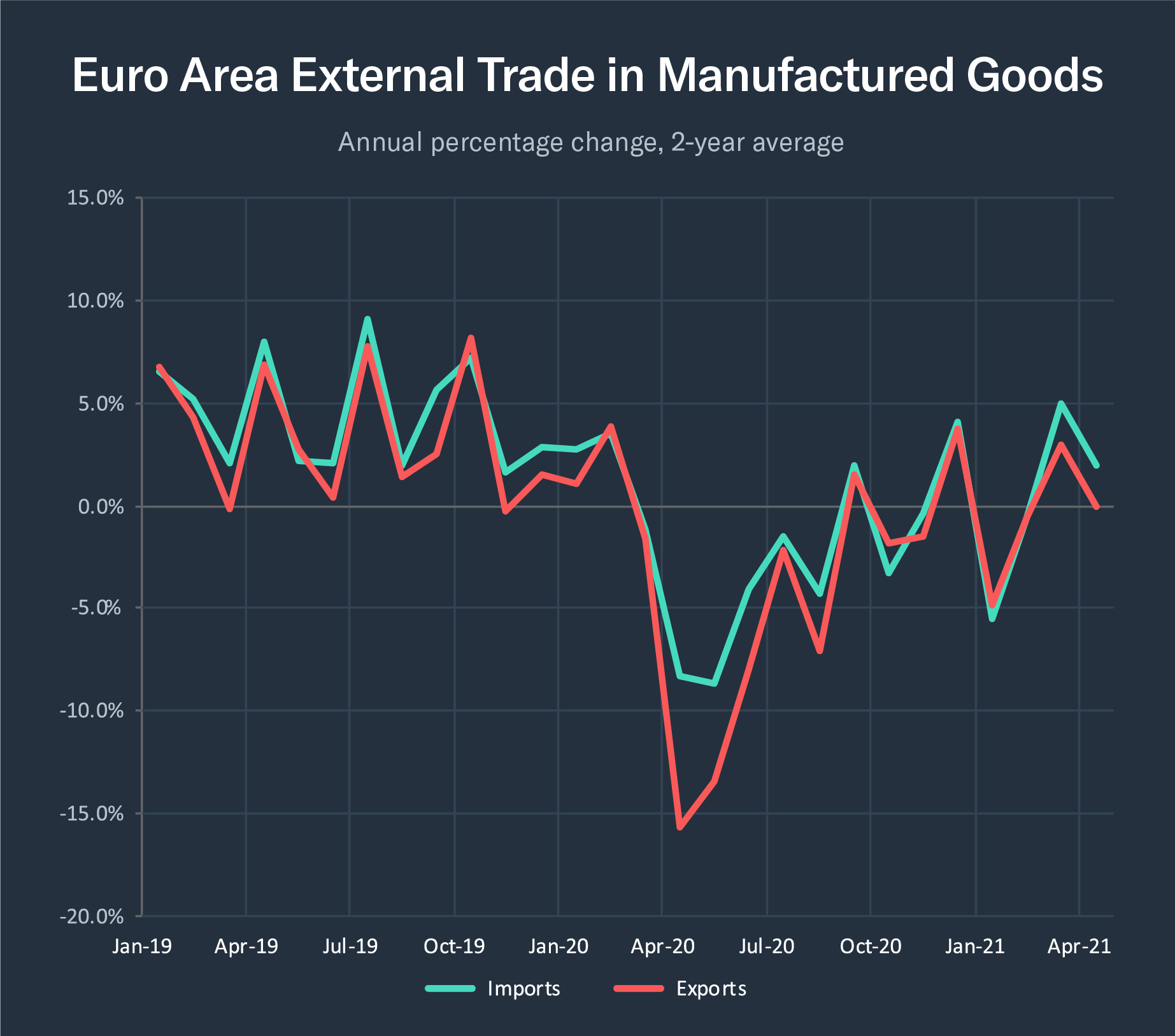 One of the major challenges in interpreting data, one year on from the economic impact of the Covid shock, is that the sharp downturn in the spring of 2020 can mean that ordinary numbers now look extraordinary.

Thus, the European Union reported last week that April exports from the Euro Area to the rest of the world were up 43.2% over the year before; imports up 37.4%.

The chart offers a way around these distortions. First, it focuses on just trade in manufactured goods—the kinds of things one moves in containers. Second, it looks at the trade of the 19 Euro Area countries with the rest of the world.

Even this data, in its raw form, tends to jump around a lot. So, to address seasonality and Covid, the chart above looks at monthly numbers relative to two years before, and takes the annual geometric average for growth.

To give an example, the April 2021 exports number in the chart is -0.1%, while the imports number is 2.0%. That means that April exports were where they would have been if trade had contracted at a steady 0.1% annual rate from April 2019 (and imports had grown at a 2.0% rate). Thus, Euro Area manufactured goods trade is pretty close to where it was two years before, after a sharp Covid dip.

It is notable, in the European numbers, how closely correlated export and import movements are (95.5% in this chart). For overall trade, the Euro Area ran a small external surplus in April 2021 of 10.9b euros, or just 6% of imports.

US retail sales down 1.3% in May after rising 0.9% in April. If we smooth by comparing the three months March-May with the preceding three months December-February, overall retail sales were up 11.9%. With this same three month comparison, among the leading categories were clothing (up 21.3%) and electronics and appliance (up 18.5%). Nonstore retailers seem to have cooled off a bit, up a below-average 8.0%.

US producer prices climb 6.6% over the 12 months to May, the biggest final-demand yearly increase since those data were first calculated in 2010.

US and EU reach aircraft subsidy truce. The two sides agreed to a five-year suspension of tariffs authorized by the World Trade Organization in litigation. The issue has been contentious for decades, with each side alleging the other has inappropriately subsidized large passenger aircraft. The imposition of tariffs in 2019 led to payments of more than $1.1bn, without resolving the issue. One motivation appears to be a united front in dealing with China, though US national security tariffs on Europe remain in place.