Let’s start with a chart. This week, it's US Inflation Indices. 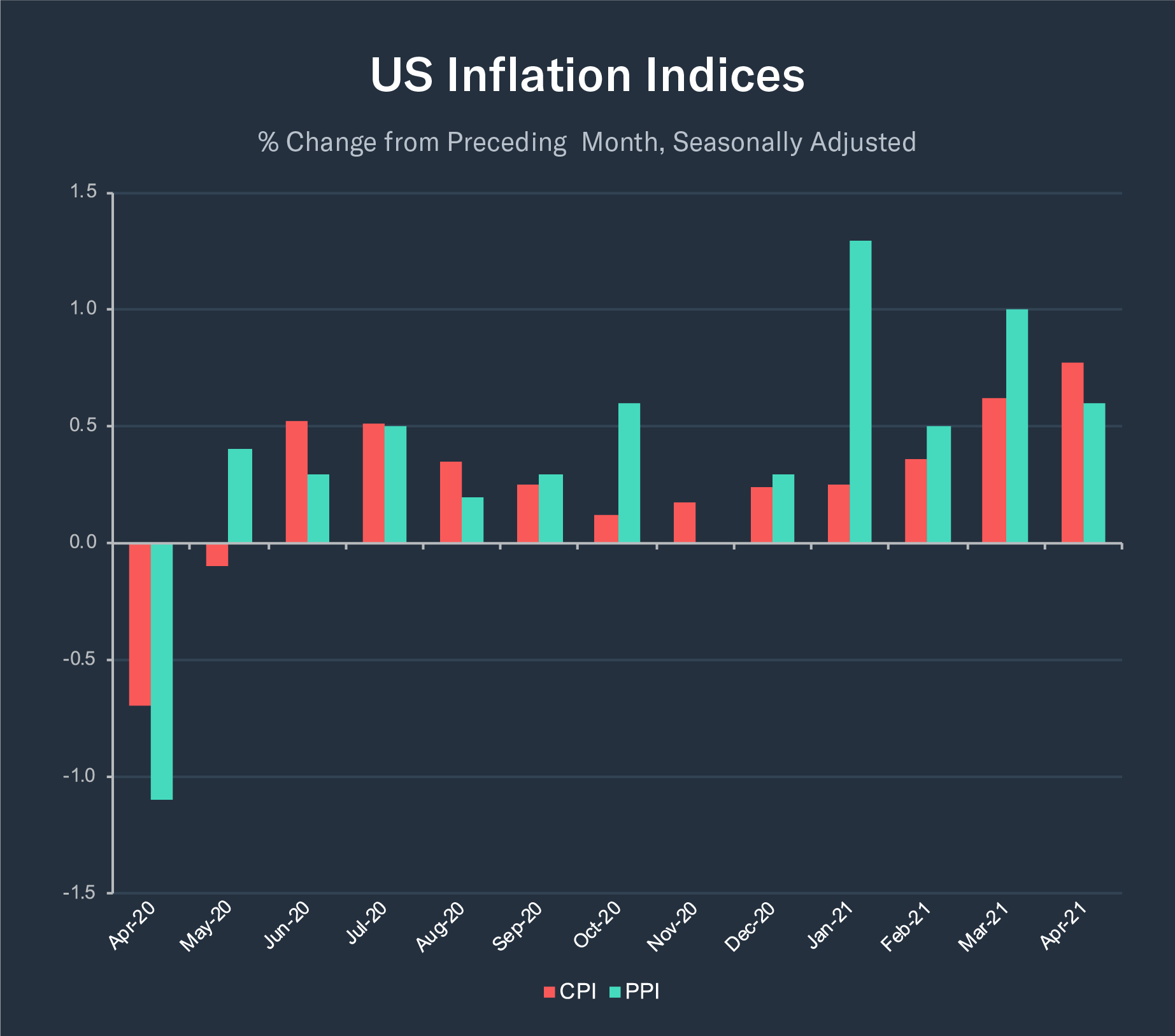 Financial markets shuddered this past week with the announcement of April inflation numbers.

Over the last 12 months, the Consumer Price Index (CPI) rose 4.2%, the biggest annual jump since Sept. 2008. The Producer Price Index (PPI) for final demand rose 6.2%, the biggest increase since that particular series started in 2010. This news came after Treasury Secretary Janet Yellen suggested interest rates might have to rise if the economy showed signs of overheating.

So how significant were the inflation readings? The chart above shows monthly percentage changes for the two key indices.

A point of caution can be seen on the left side of the graph above. We are one year past some of the worst economic turmoil of the pandemic, which can amplify year-over-year statistics. In April 2020, prices fell significantly, resulting in a dip in the indices.

Is such extrapolation sensible? That’s hard to say. CPI seems to be accelerating from last October; a trend in PPI is harder to read.

A final consideration concerns which measure of inflation to track. There are other prominent measures looking at personal consumption expenditures which are more tame. Even within CPI and PPI, there are variants that exclude volatile items: e.g. CPI excluding food and energy was up only 3.0% over 12 months.

Prices are clearly rising. Whether the trend will last and whether it will be enough to trigger a monetary policy response remain to be seen.

Chinese Producer Inflation Is Up

Producer prices in April rose 6.8% from a year earlier, the fastest rate in over 3 years. Consumer prices were up a more modest 0.9%.

March statistics showed increases in UK exports (8.6%) and imports (4.5%) with the EU from February. Still, comparing January-March 2021 with October-December 2020, UK-EU exports were down 18.1% and imports down 21.7%. For that quarterly comparison, UK exports with non-EU countries were up 0.4%, with imports down 0.9%.

The world’s 3rd largest economy grew at a 1.8% rate in March, but pandemic concerns prompted lower forecasts for Q2.

In Congressional testimony, the USTR defended Trump-era steel tariffs as necessary. There were reports of a truce that would preclude EU retaliation, while leaving the tariffs in place.