The Clock is Ticking

When attendees registered for our global conference, FORWARD by Flexport, most signalled a strong interest in learning more about IMO 2020. It’s not surprising, given the uncertainty that enshrouds the topic. To dispel some of that confusion, we took the opportunity to talk with Jamie Webster, Senior Director, Center for Energy Impact, with the Boston Consulting Group (BCG). The focus: whether the world is truly ready for IMO 2020 – and how everyone should prepare. I’m pleased to share the resulting insights and strategies you can use to plan ahead.

Dubbed by BCG’s Webster as “the biggest planned disruption in the history of energy markets,” IMO 2020 is, nevertheless, a first step to a better world, with 2050 decarbonization as a greater goal. As we shared in a prior blog post, most cargo vessels use oil that contains 3,500x more sulfur than typical automotive diesel, producing sulfur oxide emissions that cause respiratory symptoms and lung disease in communities around shipping ports. Reducing sulfur emissions will have a positive impact on our environment and global health.

Yet, we’re less than 60 days away and there is still considerable uncertainty about what the market effects will be.

IMO 2020’s sulfur restrictions were announced in 2016 with a clear implementation date and mandate. It’s been well publicized. The complexity and confusion may be a product, in part, of just how many parties will be affected. In the words of one senior energy analyst cited by CNBC, “[IMO 2020] is going to affect crude oil producers, traders, ship owners, refiners, equity investors, insurance companies, logistical businesses, banks…Who’s left? I’m struggling to think of anyone it might not affect.”

Webster attributes the uncertainty specifically to three stakeholder groups, each with open questions:

IMO 2020 mandates the sulfur content of marine fuel oil to be reduced from 3.5% to 0.5%. That reduction could add up to significant disruption to the shipping and refining sectors​. According to new BCG research shared with Flexport*:

“Compliance will result in an additional $25 billion to $30 billion in fuel costs for container liners from 2020 through 2023. The annual increase will be highest in 2020, reaching an estimated $10 billion to $12 billion...additionally, liners will need to make capital expenditures (capex) to install scrubbers and incur operating expenses (opex) related to inspections.”

At the same time, compliance costs for ocean liners will likely mean passthrough charges for shippers in the form of a “bunker adjustment factor” (BAF). BAF is assessed per container and based on Brent crude oil price, but individual ocean carriers may use slight variations when calculating surcharges.

Surveying the landscape in terms of carrier announcements and other sources, we estimate added shipping costs for BAF globally to be approximately $60 per TEU, based on current fuel costs, with the spread between fuels at about $200 per tonne. Based on that, the following is how we see the impact on TEU price for individual trade lanes potentially playing out.

At FORWARD, Webster forecasted that IMO 2020’s resulting disruption could span anywhere from 1-5 years, depending on which scenario plays out. BCG’s IMO 2020 model outlines four paths implementation could take: 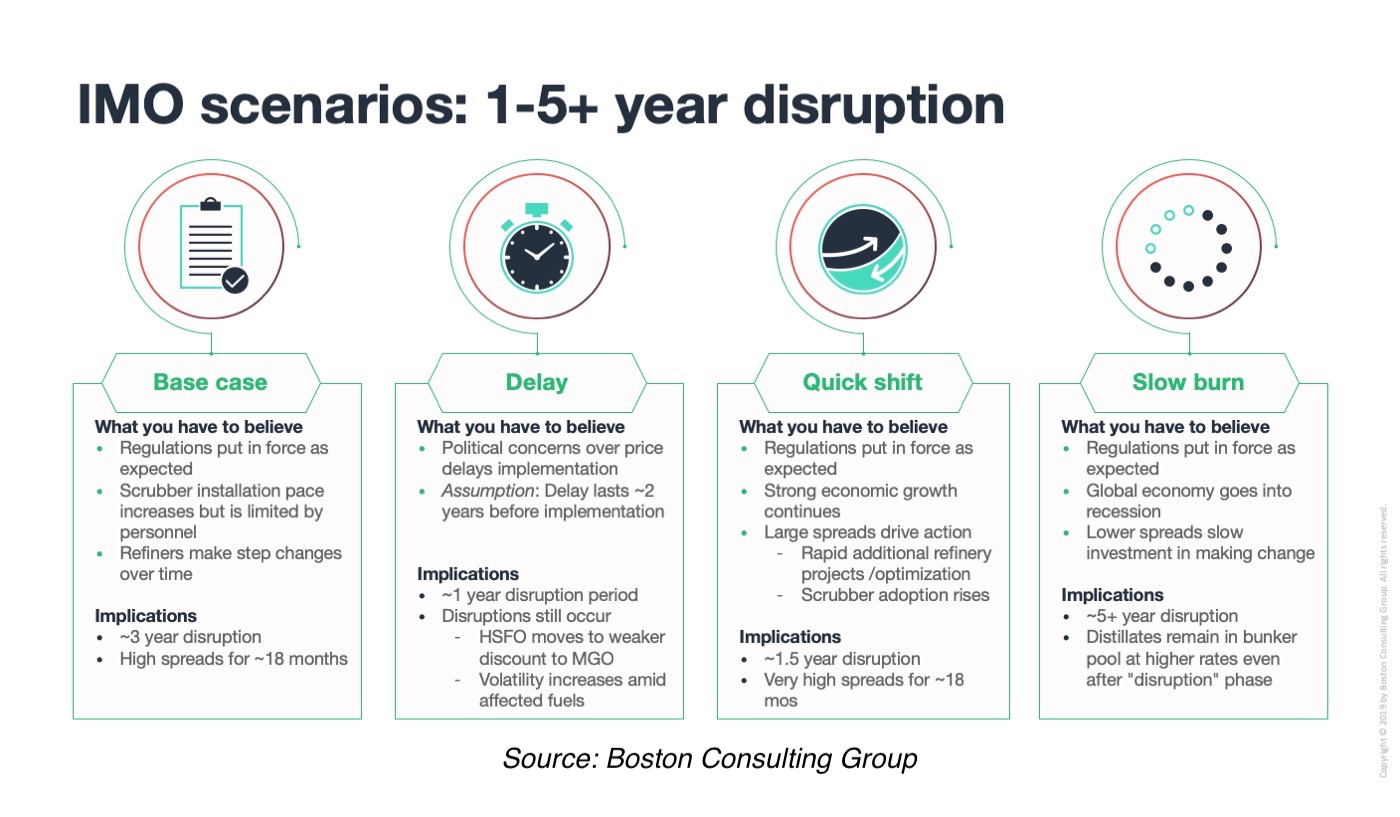 Like BCG, we believe the fourth scenario, ‘Slow Burn’ is the most likely. In this scenario, we project that anywhere from 15-20% of a global fleet will get equipped with scrubbers. However, should the US economy plummet between now and the deadline for the regulation, things could head in a different direction.

Are We Ready: Yes or No?

After all is said and done, the multibillion dollar question remains as to whether the industry is prepared for IMO 2020.

Citing uncertainty about low-sulfur fuel formulas and guidelines, as well as unknown impacts on vessel engine performance from the new fuels, BCG’s Webster is not optimistic. He also noted the knock-on effects for other transportation modes that may be even less prepared for the IMO 2020. “This is going to raise costs for rail providers, for airlines, for drivers in Europe that use diesel,” he observed. “The additional barrels [of required diesel] will put a real crimp on these companies who are just waking up to IMO 2020. They’ll be impacted, but they aren’t nearly as prepared.”

Webster also offered a sobering outlook on the immediate environmental impact of IMO 2020. Although reducing sulfur may help improve air quality, sulfur is not a greenhouse gas and will not help solve the logistics industry’s massive contribution to climate change; if shipping was a country, it would be the sixth largest polluter in the world.

At the same time, there is tremendous complexity around receiving and managing disposal of sulfur materials removed by scrubbers, if ports will accept those materials at all. Worse, remnant high-sulfur fuel oil (HSFO) unused by ocean liners will likely be brought on shore to countries that will use it for power generation – meaning that sulfur may still be released into the air for several years.

It’s no wonder, as we reported several weeks ago, that at the recent United Nations Climate Summit Action 2019, 65 countries vowed to cut greenhouse gas emissions to net zero by 2050 and 70 countries announced a renewed commitment to take action to improve environmental stewardship.

Looking Ahead: 5 Signposts for the Future

Ready or not, here are a few key, interrelated market indicators BCG suggests watching for, to understand the potential impact of IMO 2020.

As reported recently in FreightWaves, new research by Alphaliner predicts that by January 2020, the headcount of scrubber-fitted containerships will reach more than 260 vessels, amounting to 2.30 million TEU. Putting that in context, the research firm says that number represents about 10% of the global container ship fleet in capacity terms—and will likely rise in the coming year. By the end of next year, ‘scrubber fitted world fleet’ capacity is expected to hit 5.00 million TEU, according to Alphaliner.

As we look toward the end of this year, we can expect heavy fuel oil (HFO) to be discounted, currently seen at prices of less than $300 per ton—an advantage for scrubber-fitted ships. Those that are not scrubber-fitted will have to switch to the pricier 0.5% very low sulphur fuel oil (VLSFO).

To see the video of Webster’s presentation, along with the slides shared, click here.

ShareTweetShare
About this author
Sanne Manders, COO
A Game Theory Analysis of Ocean Carrier Competition
A Call for Change: How Optimizing the Customer Experience Can Transform Global Trade for Everyone