Ocean and air freight rates and trends; trucking and customs news for the week of August 7, 2019. 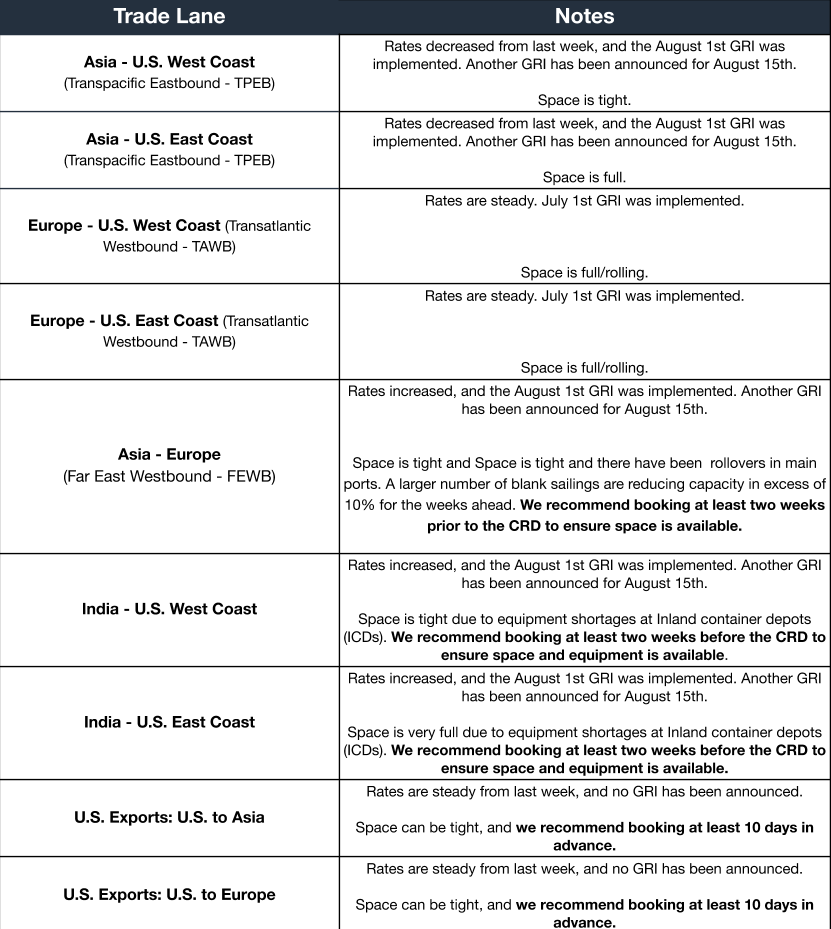 Tariff Announcements Lead to Surge in Imports Tariffs on Chinese goods — and the subsequent spike in imports into the United States over the last year — have strained warehousing solutions in some of the country’s biggest ports. With the latest round of tariffs set to take effect September 1, shippers and importers are facing a storage shortage. 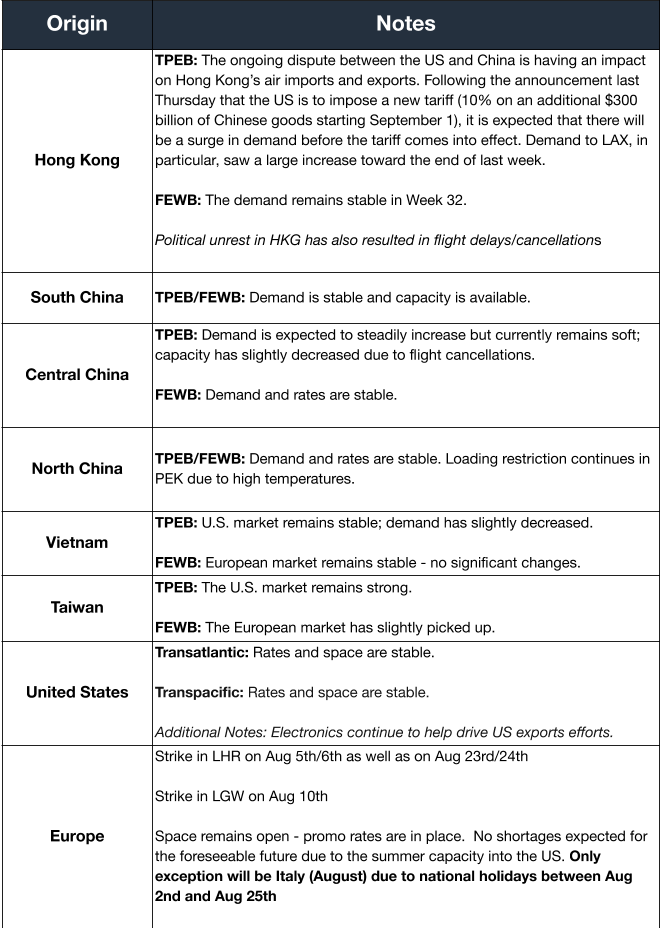 Protests in Hong Kong Lead to Canceled Flights More than 100 passenger flights out of Hong Kong International Airport — the busiest air cargo hub in the world — have been canceled due to ongoing protests in the country. More recently, six freight flights have been canceled with expectations of more cancelations to follow.

Section 301 List 4 Tariffs to begin on September 1, 2019 On August 1, 2019, President Trump tweeted that the United States will roll out a 10% tariff on approximately $300 billion worth of products from China ( "List 4") beginning on September 1, as opposed to the 25% initially described in the Federal Register. This will be in addition to Section 301 tariffs already imposed on USD 250B worth of Chinese products, and essentially cover all Chinese products not already tariffed. There has yet to be an announcement regarding whether or not the Administration will initiate an exclusion process for List 4.

CBP User Fees going up for FY 2020 CBP is adjusting certain Customs user fees and limitations established by the Consolidated Omnibus Budget Reconciliation Act (COBRA) for Fiscal Year 2020. In accordance with 19 CFR 24.22, CBP must determine annually whether the fees must be adjusted to reflect inflation. After review, CBP has determined that the factor by which the base fees and limitations will be adjusted is 7.167%. See the full list of fee and corresponding limitation changes here.

Mitigating Guidelines for Export Seizure According to this CBP published guidance, changes are being made in distinguishing between technical and substantive export control violations. When CBP seizes merchandise, parties who have an interest in the seized merchandise can submit an administrative petition to CBP to request remission of the forfeiture and return of the merchandise. CBP is adopting the standardized remission amount ranges for all violations, with guidance that the remission amount to be paid by the interested party for violations should generally be at the higher end of the range for "License Violations" and violations that are egregious in nature. The remission amount for violations that are Non-license related should be at the lower and middle ranges, depending on the specific nature of the violation.