Recent news and updates related to the ocean and air freight market for the week of October 5, 2017. 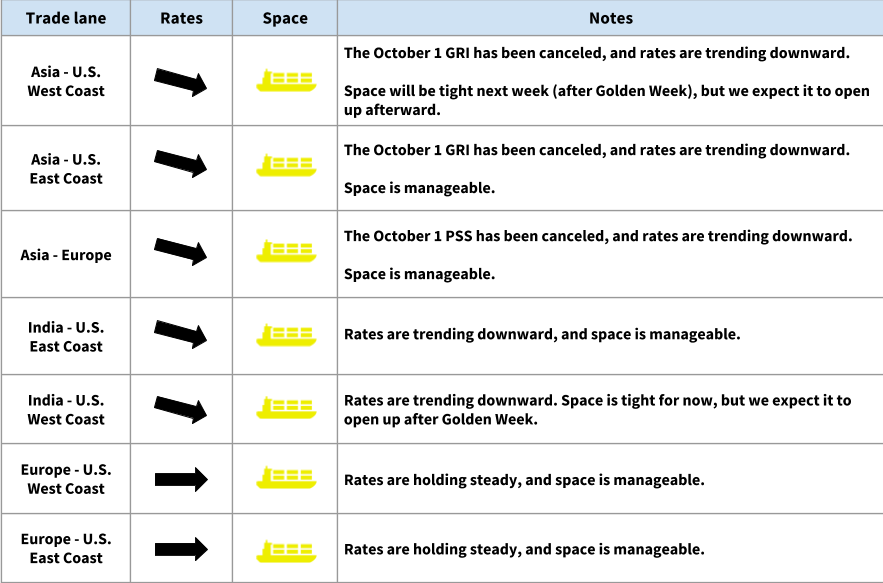 It’s Golden Week, and the ocean market is quiet

The October 1 GRI was canceled, and it’s likely that rates will continue to hold steady or trend downward (depending on the lane) over the course of the month. We’re watching closely to see what happens with the October 15 GRI.

Blank sailings this week and next week

As is typical for this time of year, carriers have announced blank sailings for many services, in an effort to bring supply in line with reduced demand. This will impact space availability next week.

As we’ve noted previously, this has been a huge year for air freight. We’re in peak season, and space is extremely tight due to Golden Week. We’re also seeing an increase in shipments converted from ocean to air.

We expect peak season -- with its high rates and tight space -- to last longer than usual this year. This is partially due to the November launch of the iPhone, which will eat up a lot of capacity out of Shanghai and may affect rates and space all the way through to January.

Chassis shortage is improving in Houston

Houston has been experiencing a chassis shortage since Hurricane Harvey, but the situation is improving. Many chassis were initially pulled for inspections, but these are returning to the market, and warehouses are beginning to catch up.

Thousands of factories have been shut down in China, as the government works to enforce stricter environmental regulations. The JOC reported that, for many of these factories, there’s no clear path to reopening.