Ocean and air freight rates and trends; trucking and customs news for the week of May 22, 2019. 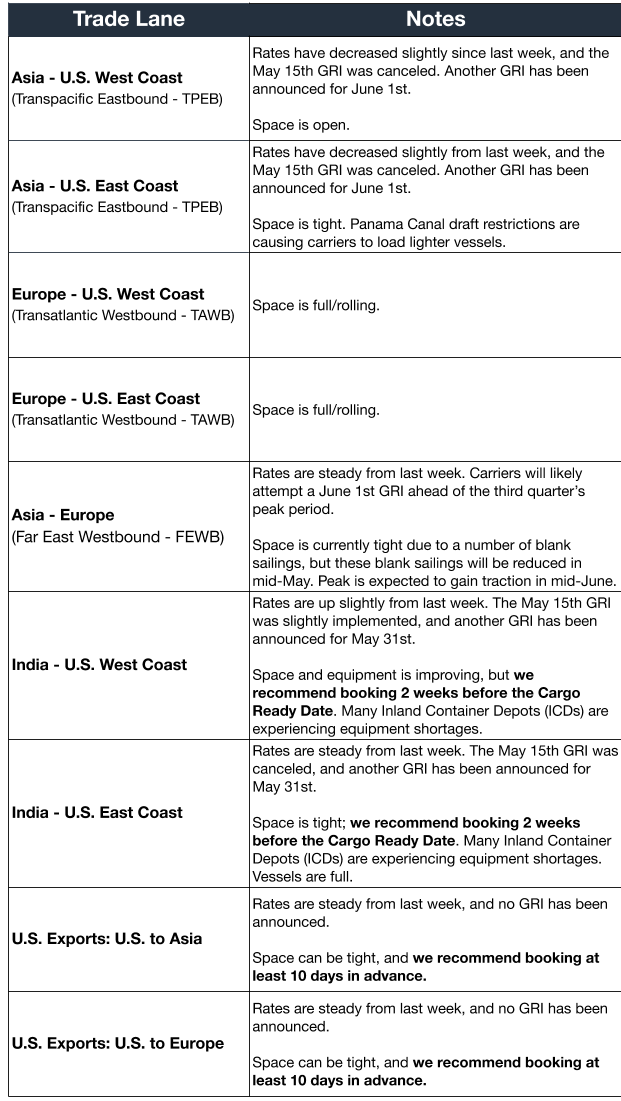 Hari Raya Holiday Season May Cause May and June Delays

The Muslim holiday will likely cause shipping delays in Indonesia, Malaysia, Singapore, and other observing countries as those celebrating take time away from work. Your operations team will keep you informed of any delays to your shipments.

The Panama Canal restricts the draft (how deep the hull goes into the water) of vessels based on the amount of water available in Gatun Lake, which varies based on rainfall, amount of vessels and other factors. Ships must be lighter to meet the draft requirement, so they need to carry less cargo/ballast/fuel or offload cargo to the Panama Canal Railway.

The Panama Canal Authority has postponed the further reduction to allowable vessel draft for the Neopanamax locks and Panamax locks from May 28, 2019 to June 12, 2019 due to increased rainfall. The long drought has cut capacity through the canal by almost one-fifth and boosted rates for shipments headed to the U.S. East Coast.

As container ship sizes grow, the Port of New York and New Jersey says it’s prepared to handle the additional cargo. The port can currently handle up to nine ultra-large container ships at one time, significantly more than the Port of Savannah, which will be able to handle six of a similar size by 2024. According to Freightwaves, “the ability to handle more, larger ships makes New York-New Jersey the first port of call for up to 75% of vessels bound for the U.S. East Coast." 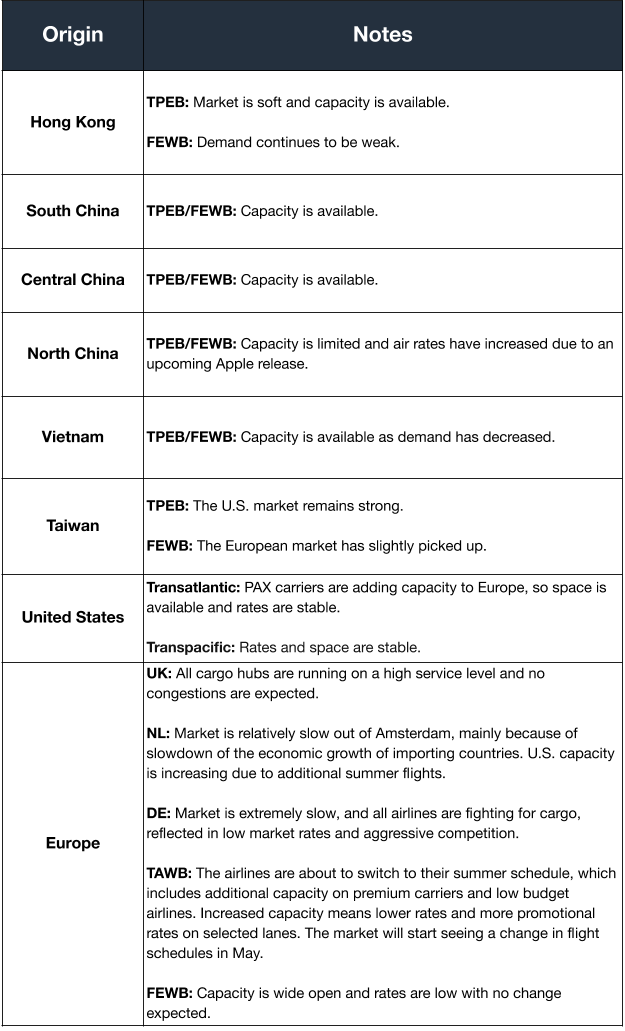 A Dutch court has declared Jet Airways bankrupt, although it is unclear whether Indian law will recognize the decision. Other air carriers are snapping up the suspended airline’s trade routes. Air India is set to benefit the most from the decision, as the carrier was given first foreign flying rights.

March air cargo volumes were 0.1% higher than last year, marking the first month of growth after four months of no or negative volume change. But trade tensions are creating an uncertain landscape, and according to the International Air Transport Association (IATA),”it would be premature to suggest that the uptick represents a change in the trend growth rate without first seeing signs of confirmation in coming months.”

International Roadcheck may lead to delays and/or increased costs, for a few reasons:

The Federal Motor Carrier Safety Administration (FMCSA) is asking for public comment on training, qualification and safety concerns regarding a pilot program that would allow 18-20 year-olds to drive commercial motor vehicles in interstate commerce. The program would create more jobs in the industry and address the nationwide truck driver shortage. So far 75% of received comments are against the program.

JB Hunt received its NVOCC license from the Federal Maritime Commission (FMC), formally entering the business of freight forwarding. The industry is still speculating on what JB Hunt will do with the license, but they may “develop more fully-fledged transpacific freight forwarding services for its domestic customers.”

On Sunday, May 19th, President Trump made a presidential proclamation that the U.S. would remove the steel and aluminum tariffs on goods coming from Canada and Mexico. Once the Section 232 tariffs were lifted, Canada removed their tariffs in a joint statement with the U.S, as did Mexico in another joint statement. Canada and Mexico are dropping their dispute cases with the World Trade Organization (WTO) in light of the recent developments. Now that the tariffs have been lifted, the chance that the United States-Mexico-Canada Agreement (USMCA) will be ratified in Canada and Mexico has increased exponentially.

For a roundup of tariff-related news and the latest on the new fourth tranche, read our Tariff Insider.