Ocean and air freight rates and trends; trucking and customs news for the week of March 13, 2019.

Congestion at the ports of Los Angeles/Long Beach has eased up some after Chinese New Year, but delays are still longer than usual. New York and New Jersey ports are still congested. 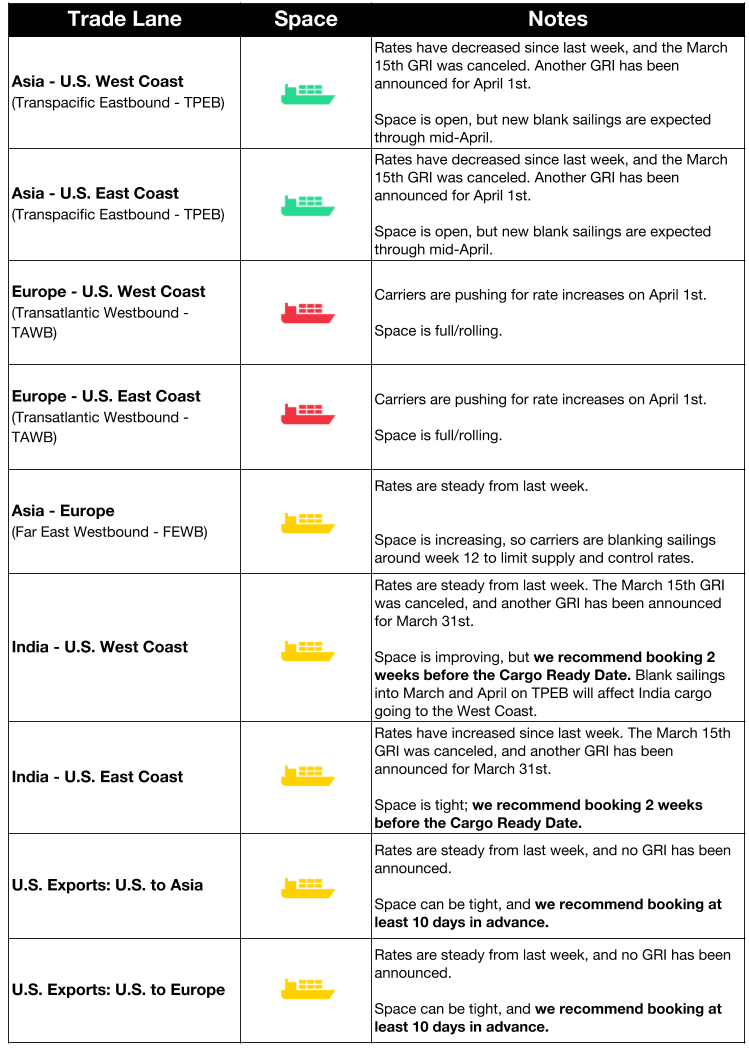 CMA CGM of the Ocean Alliance and MSC of the 2M alliance are launching an ocean service that will connect northern Europe, the Mediterranean, Australia, and Southeast Asia. The string is set to launch in September, and will deploy 14 vessels of 9,500 TEU. The new string will significantly increase capacity for Australian shippers and consignees.

In the face of Brexit uncertainty, shippers are expected to start moving their distribution hubs and warehouses from the UK to the European Union. Assets based in the EU will start becoming a safer investment, avoiding any UK logistics delays caused by Brexit. Cash-flow problems are also expected for UK shippers in the event of a no-deal Brexit. 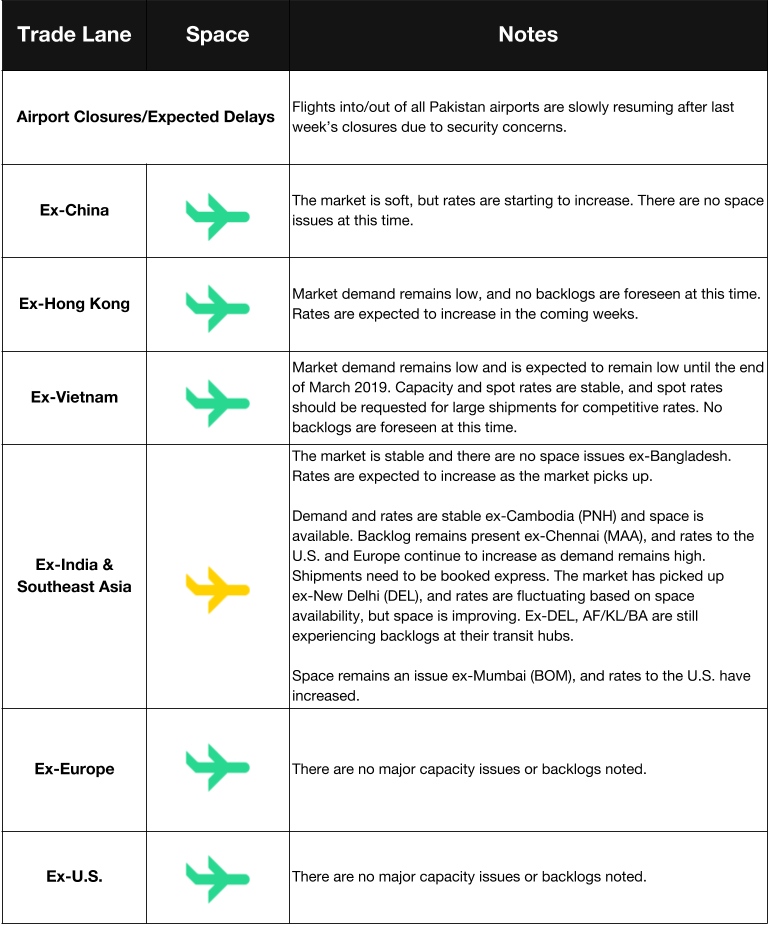 After several recent cargo-related accidents, dangerous goods (DG) shipments are coming under fire. 40% of e-commerce shippers are unfamiliar with DG regulations, which is “alarming,” and roughly 150,000 containers a year are “ticking time bombs.” Efforts to educate shippers are being discussed, as well as the responsibility of forwarders.

The American Kitchen Cabinet Alliance (AKCA) filed an anti-dumping case with the International Trade Commission (ITC) against China. The petition scope is targeting wooden kitchen cabinet and bath vanity production (solid wood and engineered wood) made in China. The scope covers cabinetry that is designed to be permanently installed in the home, including: floor mounted, wall mounted, ceiling hung, or attached by plumbing. The KCA stated in a press release, “Chinese imports of kitchen cabinets into the United States are up by more than 75% since 2015 and threaten our $9.5B American industry.”

The Personal Care Product Safety Act recently introduced legislation (S.726) asking that the FDA evaluate a minimum of five ingredients per year in personal use products (cosmetics). The review would put a review process in place and provide guidance for ingredients that need consumer warnings, especially those that might be harmful to children. If the legislation passes, the FDA would have more power to recall products and review their ingredients. The National Alliance for Hispanic Health put out a press release supporting the legislation.

U.S. Customs and Border Protection (CBP) posted on the Federal Register that it will re-open the public comment period that closed on February 4th. CBP held a public meeting on March 1st that was well received, with participation from the public. After the meeting, CBP felt there was a need for further comments and engagements from the public on how customs should address six different themes they’re mapping out: Emerging Roles in the Global Supply Chain, Intelligent Enforcement, Cutting-Edge Technology, Data Access/Sharing, 21st Century Processes, and Self-Funded Customs Infrastructure. Any comments you wish to submit are due by April 11th.