Ocean and air freight rates and trends for the week of November 22, 2017. 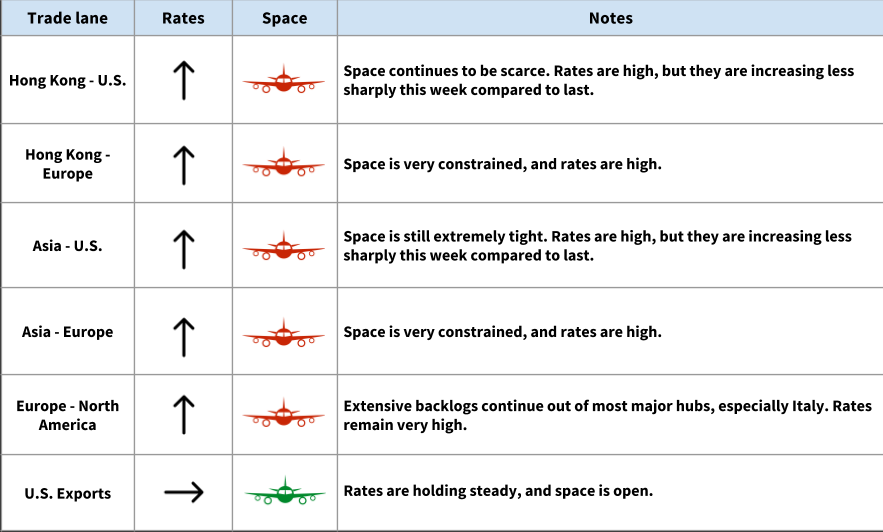 High demand has led to several weeks of space constraints, and this week is no different. (That’s why Flexport has begun chartering its own freighter flights from Hong Kong to Los Angeles.) The space crunch will continue through peak season.

We expect rates to remain strong, but as we move past Thanksgiving and into December, rates will increase less sharply.

Congestion and delays at FRA

If your cargo is being routed through FRA, you should expect delays. Ground handling operations are very constrained due to increasing volume into FRA, and we’re seeing extensive delays for pickups and deliveries. 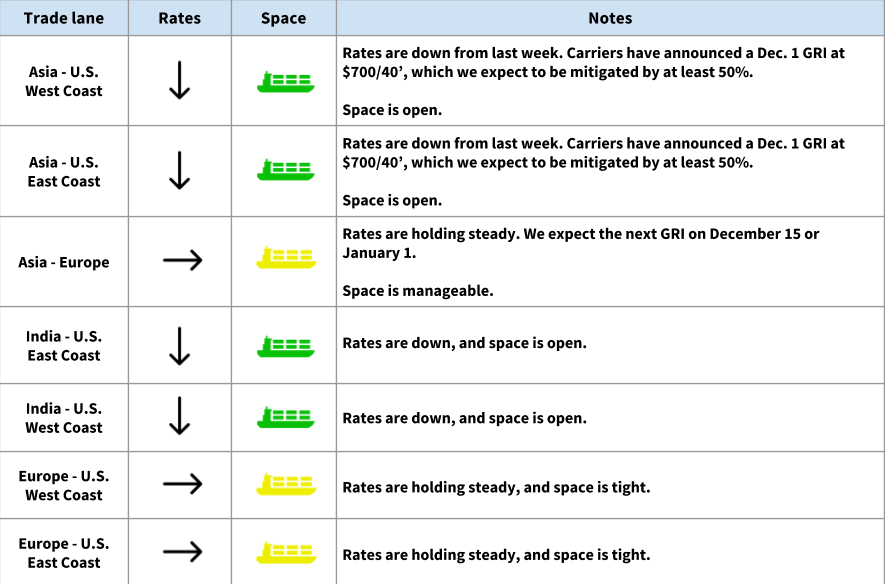 The Nov. 15 GRI was canceled, and rates to the U.S. are down slightly. Asia - Europe rates are down as well.

Carriers have announced a GRI of $700/FEU for December 1. We expect this be only partially implemented.

Peak season for Asia to Oceania

This is the traditional peak season for Asia to Oceania -- rates are high, and space is very tight. If you’re shipping to Australia, we recommend booking 2 weeks in advance.

We’re seeing significant wait times for truckers at LAX. If you have cargo routing through LAX, expect delays and trucking wait fees.

Savannah and Atlanta are still experiencing congestion and chassis shortages. If your cargo is being routed through Savannah or Atlanta, you may see chassis split fees and/or storage fees if your trucker needs to make an extra trip to pick up a chassis.

Fuel tax increase in California is driving up fuel surcharges

As of November 1, California has increased its diesel tax to 36 cents per gallon (this is a 20-cent increase). As a result, many trucking providers are implementing higher fuel surcharges.

Beginning December 18, truck drivers will be required to utilize Electronic Logging Devices (ELDs). This will change the game for long-distance trips, and after implementation, we’ll see a slight increase in rates across the FTL market.