Why have oil prices soared? What part does Russia play in global oil supply chains? How might global logistics networks be affected? Will prices remain high? This report provides an overview of the potential impact of sanctions against Russia in the crude oil sector.

The U.S. government plans to ban the import of Russian oil and oil-derived products. That’s part of rapidly expanding sanctions against Russia linked to the conflict in Ukraine, as discussed in previous Flexport research. The timely implementation of this ban depends on overcoming reported legislative hurdles.

The United Kingdom (which will slowly phase out imports of Russian oil and oil-derived products) and Canada have followed suit. The European Union is reportedly considering a similar action having already decided to cut imports of natural gas from Russia by two-thirds within a year.

Oil Prices Surge in Response to Threat of Action

Commodity prices ranging from energy to metals and agriculture have reached multi-year highs in response to the threat and implementation of military conflict in Ukraine. Within the energy complex both natural gas and oil prices have risen and proven volatile during the conflict, and, as of the writing of this report, remain elevated.

Russia has reportedly threatened to increase natural gas prices, should restrictions on Russian oil supplies be put into place. 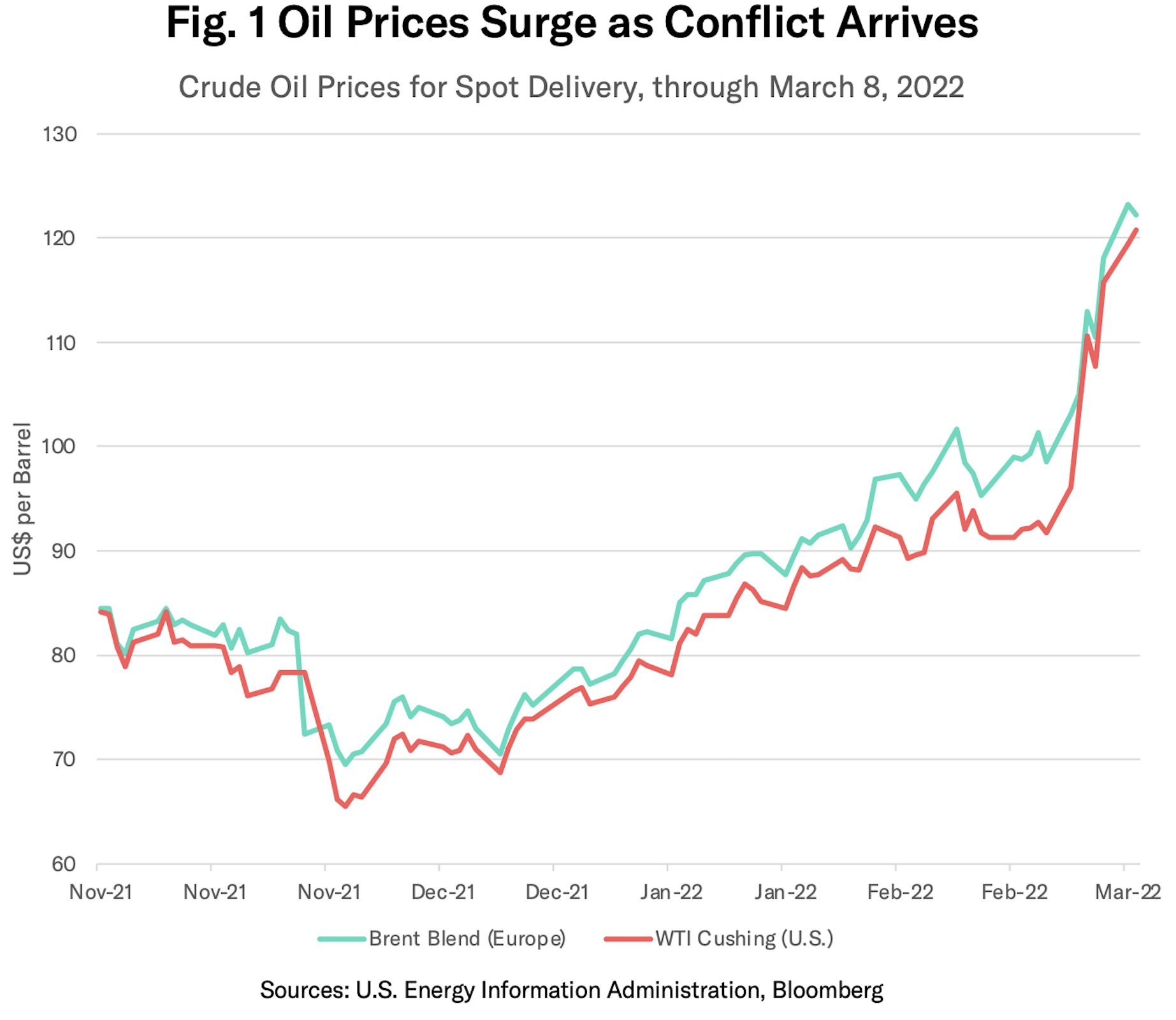 Russia is a significant global supplier of both crude oil and its refined products. In terms of crude oil, Russia accounted for 12.1% of global production in 2020 according to BP data. It also accounted for 12.3% of global exports. While they are one of a number of major players in the market, such amounts can be important when demand is relatively inelastic.

The impact of the U.S. sanctions on Russian domestic finances may be minimal given it accounted for 1.3% of Russia’s oil exports in 2020 (source UN Comtrade). The largest export market in 2020 was the EU which represented 46.7% of Russian oil exports. Other major buyers include China at 32.7% and South Korea at 6.9%.

Looking in the other direction, Russia only accounted for 3.5% of U.S. crude oil imports (source U.S. Census Bureau) in 2021, valued in dollar terms at $4.7 billion. While small in percentage terms, the sanctions may prove more significant for certain refiners whose facilities require the grade of fuel Russia supplies. 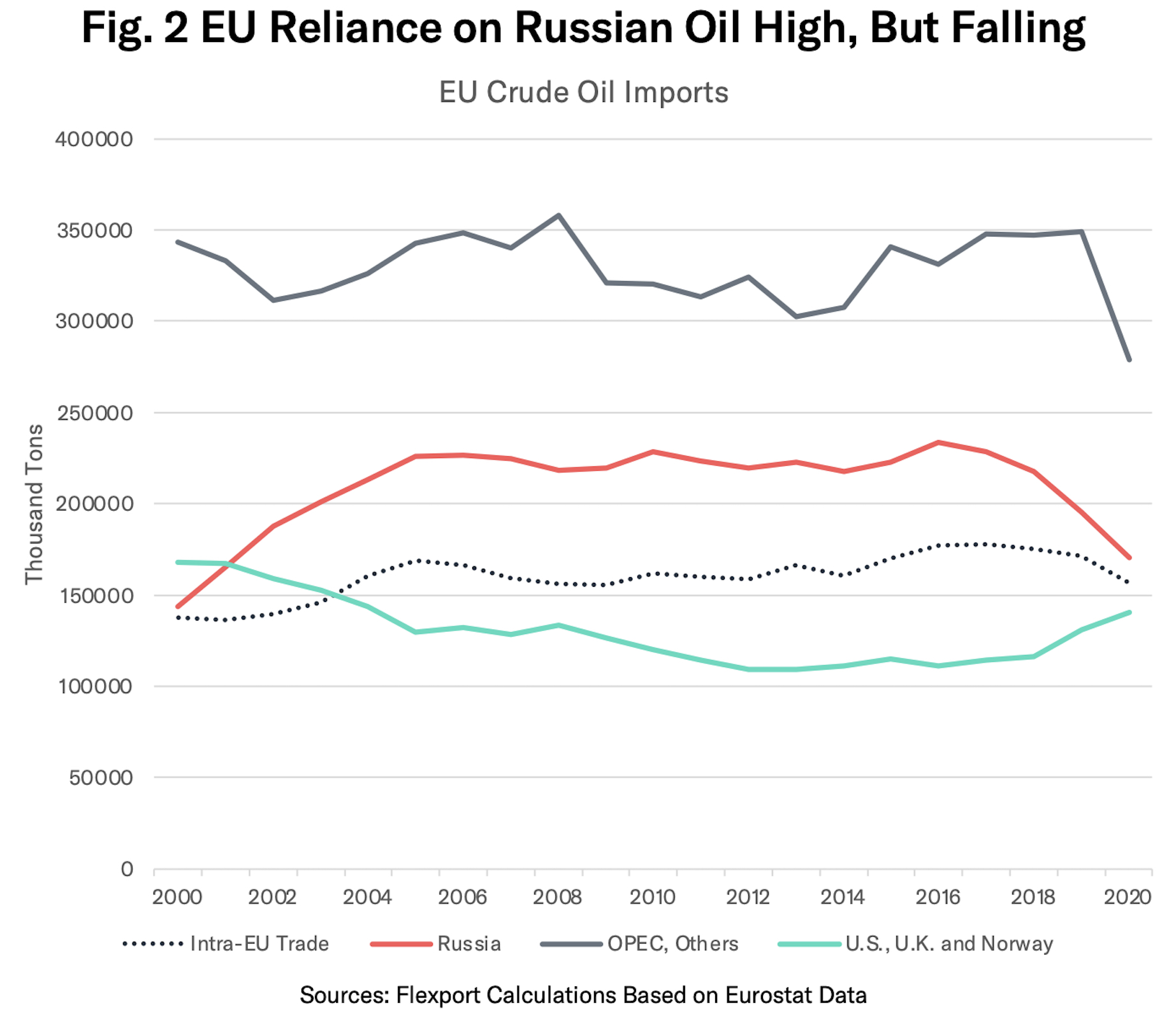 Russia’s refined oil exports, with a value equivalent to 60% of its crude oil shipments in dollar terms (source UN Comtrade), represented 9.7% of the global total in 2020. For the EU, Russia represented 25.9% of refined oil imports.

The logistics industry is highly dependent on crude oil products for operations. There are also few replacements, certainly in the near-term, for traditional oil products. 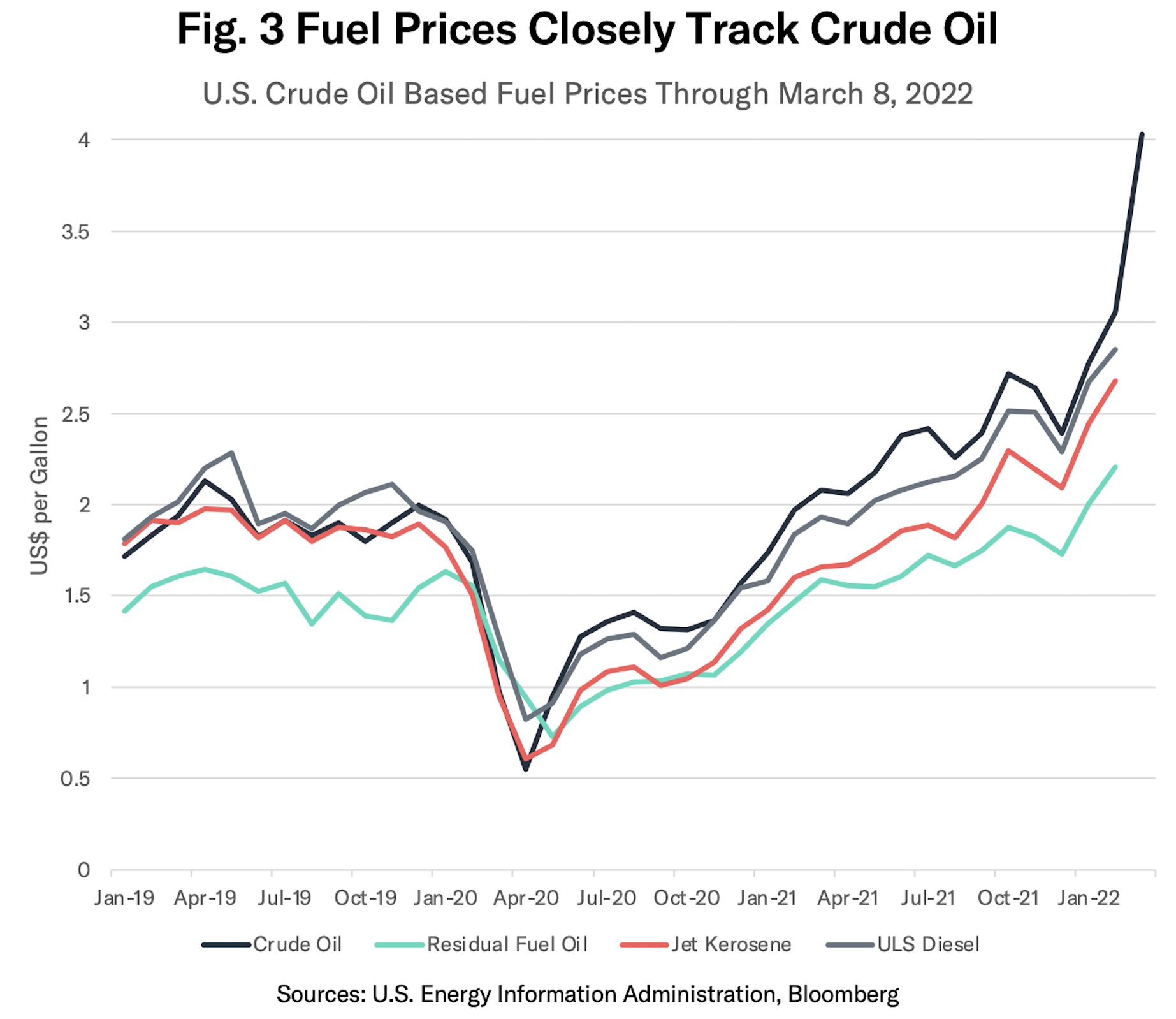 In ocean freight, bunker fuel and marine diesel remain the predominant source of propulsion. The shift to renewable energy sources has led to the increasing use of liquefied natural gas, though these require new vessels, while other fuels, including methanol and ammonia, are still in the proof-of-concept stage.

As shown in Figure 3 above, the price of residual fuel oil (source EIA) and other oil-derived products track closely to crude oil. That’s likely to mean that the 31.8% increase in oil prices as of March 8 vs. the February average will translate into higher fuel oil prices. The latter had already increased by 28% in February versus December, inline with the 27.8% rise in crude oil prices over the same period.

There may be a feed-through to ocean freight costs. Long-term ocean shipping contracts normally have a bunker-fuel adjustment factor. Those are typically adjusted on a quarterly basis, with the next update due in April 2022.

In the short-term, market prices may respond more swiftly, though per Flexport’s March 8, 2022 Freight Market Update the potential for weaker market demand in Europe may act as an offset to higher fuel costs. Press reports suggest carriers are already looking to increase prices in response.

A similar situation may be faced by the air freight industry, which is already having to deal with potentially longer routings due to airspace closures, as discussed in recent Flexport research. As shown in the chart above, jet kerosene also broadly tracks crude oil prices and had also increased by 28% in February versus December.

In the near-term, the impact of higher jet kerosene prices may be seen rapidly in freight rates. Charter operated flights typically have specific fuel-cost clauses. In some markets, including South Korea and Hong Kong, operators have regulated fuel surcharges. The latter have been scaled up in Hong Kong for example to track higher market rates.

Over the long-term there is a move towards using more sustainable aviation fuel (SAF). That’s produced using non-fossil fuel feedstocks (eg cooking oil or biofuels), but so far is not produced in sufficient volumes to offset a wholesale shift away from traditional jet kerosene.

The trucking industry faces similar challenges. Ultra-low sulfur diesel prices in the U.S. have tracked the increase in crude oil prices too, rising by 24.4% in February versus December. Trucking firms may choose to apply fuel surcharges in order to pass higher costs through.

Looking further ahead, as with jet kerosene, there are sustainable alternatives available though again not in the quantities needed for a wholesale offset of traditional diesel. For trucks running on gasoline a higher proportion of ethanol is possible but requires engine retuning.

The outlook for fuel costs from here is for prices to decline to $103 per barrel by February 2023 according to futures market oil prices (source ICE as of March 8, 2022), equivalent to a 20% reduction. Futures prices show what trajectory market speculators and investors expect the market to follow.

If futures prices are below current prices it would suggest market participants expect supply conditions versus demand to improve in the future - for example if sanctions were expected to be short-lived.

Governments may act to mitigate the impact of higher prices. In fact, many governments, including the United States, have agreed to release part of their strategic oil reserves to try and offset the increase in prices. The U.S. increased its strategic release to 90 million barrels from 30 million barrels planned initially after announcing its new sanctions.

Thus far OPEC has decided to stick to its current production plans. It is worth noting that Russia is affiliated with OPEC, but not a direct member. A significant increase in production plans by OPEC would be needed to offset the loss of Russia’s production - OPEC’s output was equivalent to 2.9x Russia’s in 2020 (source BP).

Geopolitical deals with Iran or Venezuela, both of which are subject to sanctions or similar measures by the U.S. and others, could return additional volumes to the market. Returning both countries to their 2007 output levels (the peak in the past 20 years) could offset 37% of Russian oil production.

Finally, it should be noted that so far Russia has not cut its oil supplies to the rest of the world. If sanctions are not more widely adopted, particularly by China, it is possible that global oil markets bifurcate somewhat with Russian oil only going to certain markets while other buyers do without Russian oil in favor of other supplies.

In conclusion: The situation regarding sanctions against Russia remains dynamic. Potential reductions in Russian oil and refined-product exports have already resulted in higher prices for oil and logistics fuel sources. Government policies will be key in determining the shape of global oil markets.