Could Russia lose its WTO privileges? What would happen to tariffs? Which products might be affected? How would supply chains adapt? This report considers the mechanisms involved, the potential products impacted and how companies may adapt to the changes.

The conflict in Ukraine has already led over 30 countries to apply a wide range of financial and export sanctions against Russia, as discussed in prior Flexport research.

The G7 and other countries are in the process of taking this a step further and plan to withhold World Trade Organization privileges from Russia. This report looks at the state of play and what the removal of such privileges might mean for global supply chains.

The Importance of Most-Favored Nation Status

The World Trade Organization’s members have committed to treat each other equally such that any country charges all other countries the same tariff / quota terms for goods except in the instance that a specific trade deal is signed.

Tariffs on imports from countries that are not in the WTO, including Iran and Belarus among others, can be set at any level the importing country sees fit. Losing MFN status can mean a country's exports could become subject to higher tariff rates, quota restrictions or outright bans. Non-goods issues such as investment restrictions, export licensing and services trade can also be applied.

One example of what being outside the MFN status, and WTO more broadly, can be seen in EU imports from Belarus where around 70% of imports were already banned ahead of the start of the Ukraine conflict.

For most countries there are statutory rules that will come into place when MFN status for a country is withheld. These typically leverage national security exemptions from WTO rules and can include the application of revised tariff rates, quotas or import bans.

U.S. - The Return of Smoot Hawley

The U.S. House of Representatives passed enabling legislation to revoke Permanent Normal Trade Relations (PNTR) so the U.S. would stop offering MFN treatment. Senate and Presidential approval is still required as of the publication of this report.

In effect, that will move Russia into “column 2” status in the U.S. Harmonized Tariff Schedule as originally passed into law under the 1930 Tariff Act (aka “Smoot Hawley Tariff”). Historically the U.S. has revoked and then reinstated MFN status for over 20 countries.

The tariffs applied under Schedule 2 can be significant in places. For example titanium products would become subject to 15% to 45% duties according to the Congressional Research Service. Similarly tariffs on imports of semi finished steel products would rise by 20% points, on top of which there are Section 232 duties of a further 25% points.

For many other products, though, existing tariffs rates under Schedule 2 are either minimal or the same as Schedule 1. That may lead the U.S. government to consider alternative tariff arrangements as other G7 nations are doing (see below).

European Union - Planned But Not Executed

The European Commission has also announced plans to remove Russia’s MFN status in EU tariff codes. Enacting such a change will require legislation to be passed through the European Parliament before being enacted in the EU’s tariff codes (TARIC).

It’s not yet clear precisely what the EU will do, beyond “revoking important WTO benefits,” in terms of ongoing tariffs for Russia. That matters as the EU does not have a fall back tariff system analogous to the U.S. Smoot Hawley conditions, requiring a new package of measures to be put into place.

The Canadian government has withdrawn normal trading status for both Russia and Belarus.

With the removal of the MFN Preferential Tariff, imports to Canada will be subject to the General Tariff rates for goods. The General Tariff rate is currently 35%. Goods in transit prior to March 2, 2022 will be allowed to benefit from the MFN as the order was not yet issued. Goods that were in transit as of March 2nd or later will pay the higher rate of duty.

The United Kingdom has also already applied 35% import duties to shipments of most manufactured products from Russia as well as a wide range of commodities (metals) and some food products and fertilizers.

Japan has also announced plans to withhold Russia’s MFN treatment, though the resulting tariffs to be used instead have yet to be announced as of the publication of this report.

Russia’s exports are dominated by commodities, particularly energy and both precious and base metals. It nonetheless has significant exports in the manufactured goods industries including processed lumber / paper, plastics, chemicals, power equipment and furniture. 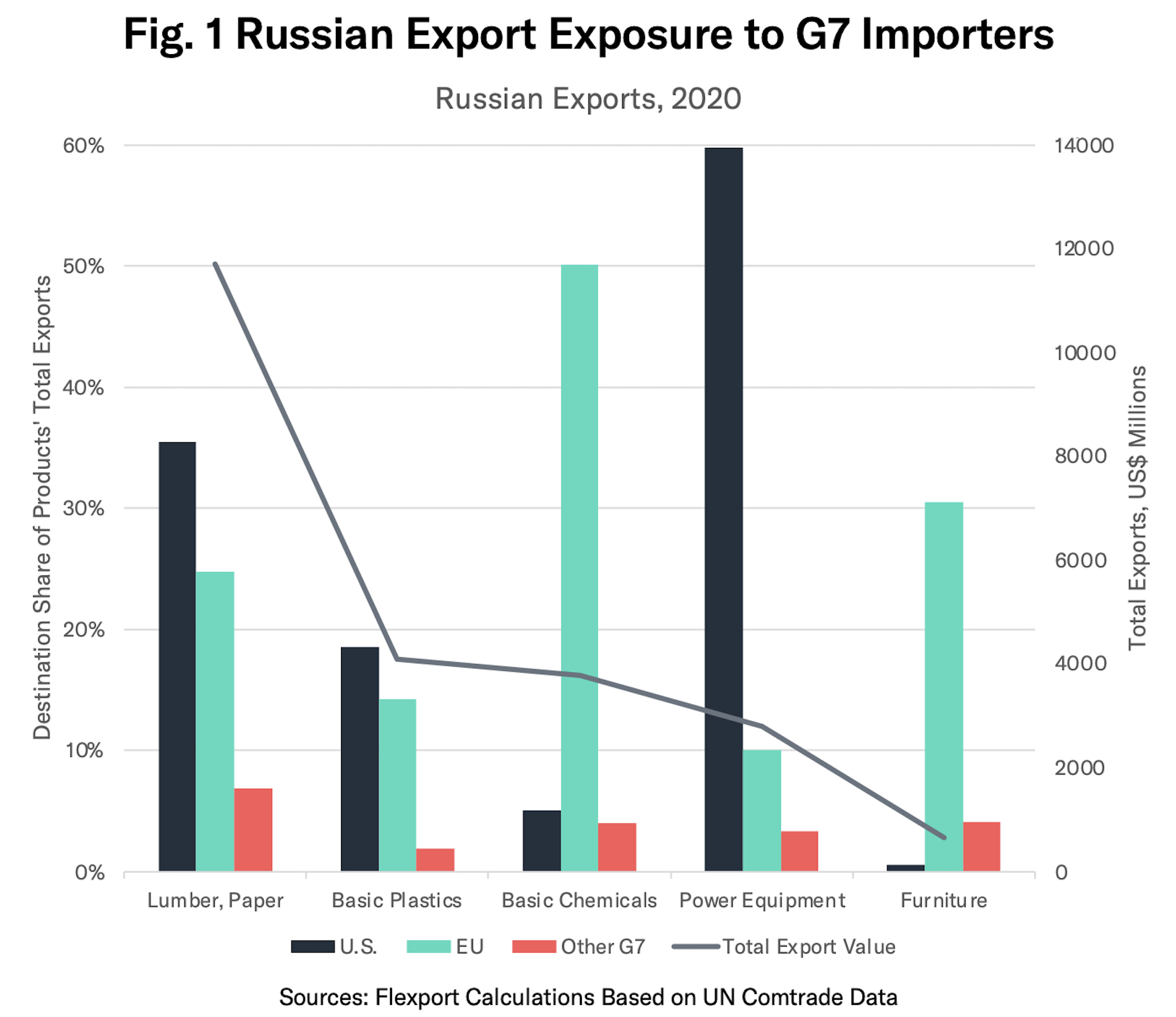 The largest area of exports outside commodities from Russia to the G7 is in processed lumber and paper products (source UN Comtrade). Shipments in 2020 were worth $7.8 billion, or 67.1% of all Russian exports of such products, as shown in Figure 1.

Similarly, for power generation equipment the G7 accounted for 73.1% of Russian exports. Note the latter excludes shipments of nuclear fuel from Russia to the U.S. for reprocessing.

Increased tariffs across a wide-range of other non-commodity products could also be disruptive, with a further 140 products (HS-4) having export values to the G7 of $10 million to $100 million per year.

Notably, the Russian government has also initiated a ban on exports of 200 product lines, including some commodities but also high tech, automotive, agricultural machinery, electrical equipment, and some commodities outside energy. That may make some of the higher tariffs a moot point.

That may force supply chain operatives to consider diversifying away from Russia even without the impact of higher tariffs. 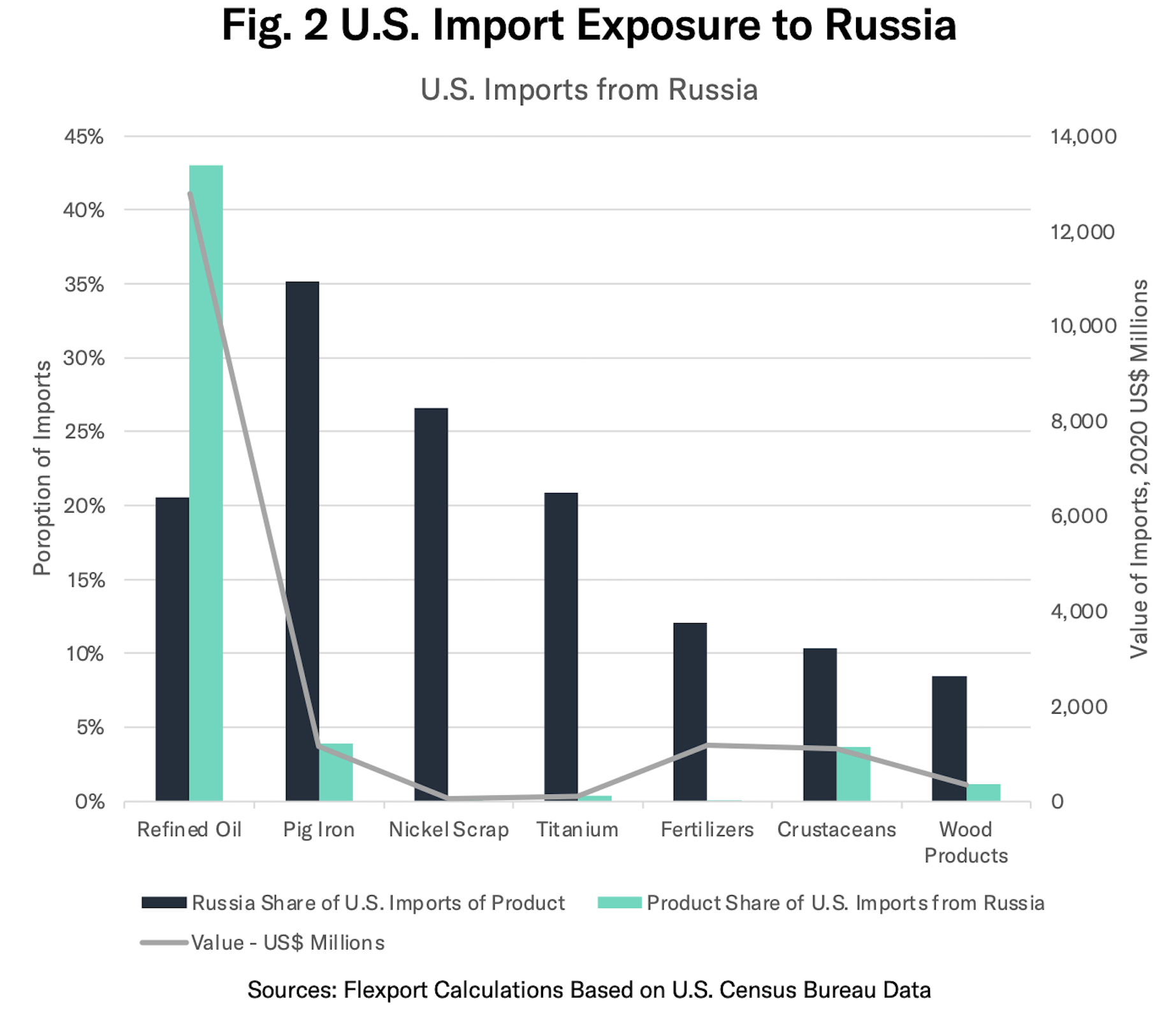 Displacing Russian exports of key minerals may be difficult if high tariffs or quotas are imposed - never mind existing sanctions in payment systems. Russia accounted for 26.6% of U.S. imports of nickel, 20.9% of titanium and 12.1% of fertilizers. Among food suppliers Russia was a significant supplier of seafood (10.3% of crustacean imports) and plywood (8.4%). Outside materials and food however no Russian products account for more than 3% of U.S. imports. 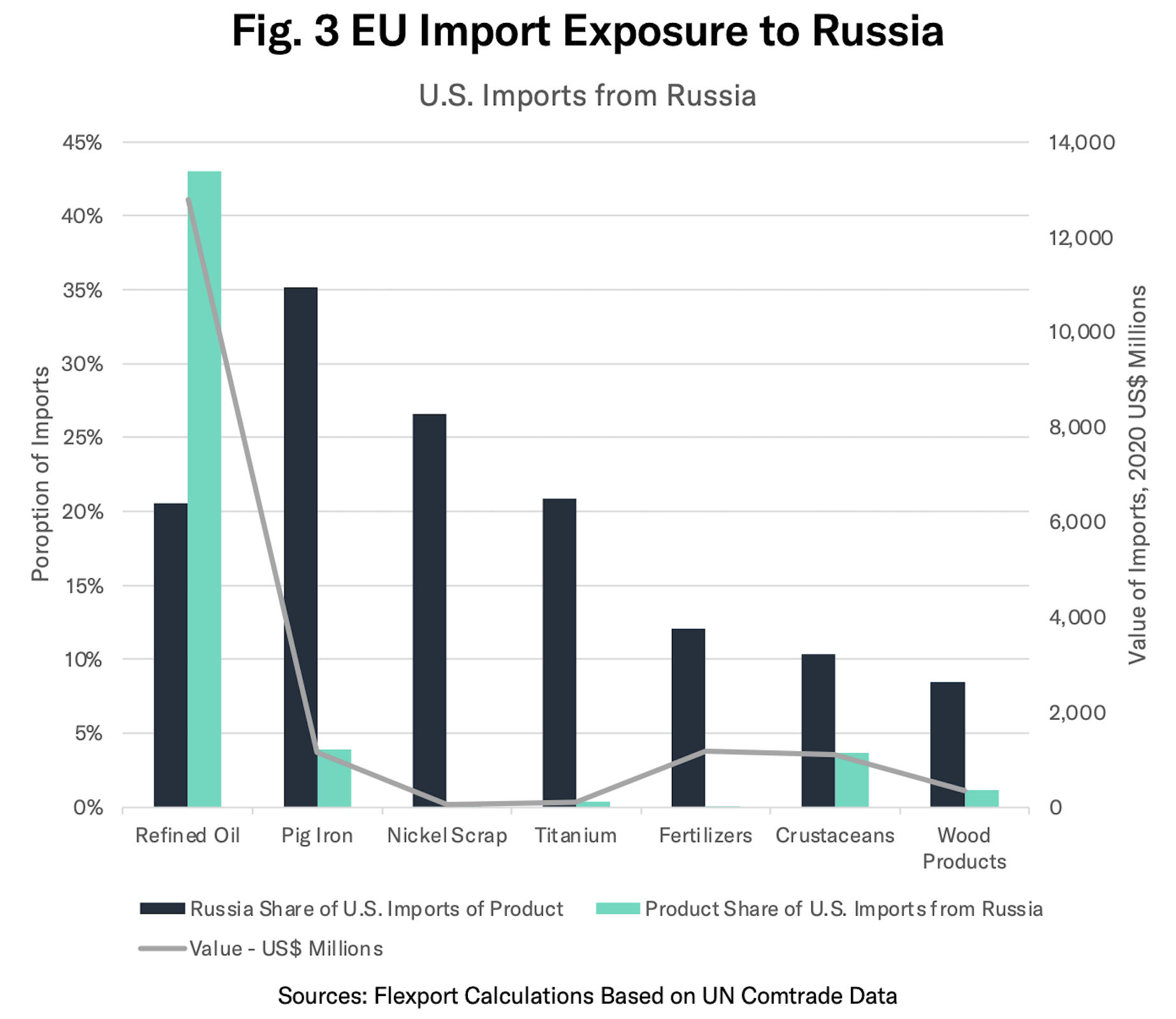 In the case of EU-28 imports from Russia (source UN Comtrade) the exposure to Russia is significantly higher, though it is still commodities where the exposure is highest. For example Russia accounted for 93.5% of EU imports of nickel and 38.7% of refined oil products, as shown in Figure 3.

Another option pursued by many companies in the wake of the Trump administration’s increased tariffs on imports from China was to simply increase prices for consumers if an alternative supplier is not available. That comes against the backdrop of wider consumer price inflation.

A reliance on government support may also be needed. The U.S. Trade Representative has already indicated that the Biden administration will “figure out how to mitigate the impacts on our economic interests”. Options may include tariff rebates, state support (e.g. subsidies for domestic or other purchases) or even exemptions. Clarity on the duration and revocation plans for sanctions may be needed to improve business planning certainty.

In conclusion: The removal of Permanent Normal Trade Status from Russia by the G7 nations is leading to elevated tariffs on imports from Russia but considerable uncertainty on implementation remains. Alternative sourcing is possible but challenging and expensive. Government support is possible while compliance is not optional for supply chain operatives.