Flexport’s State of Trade Webinar held on March 23, 2022 dived into the history and effectiveness of sanctions as well as their application against Russia during the Ukraine conflict. This report provides key data from the webinar as well as a precis of commentary from the speakers, Prof. Daniel Drezner of Tufts University and Flexport’s Chris Rogers about sanctions against Russia. This is the second report looking at the topic, the first of which looked at the history and effectiveness of sanctions.

A Process of Escalation - Sanctions During the Ukraine Conflict

How are sanctions being applied during the Ukraine conflict?

Flexport’s research coverage of sanctions has focused on developments since just before the start of the conflict in Ukraine. There has, however, been an escalating phase of sanctions related to Russia’s actions in the region.

Between 2014 and January 2022 the U.S. and other applied sanctions linked to Russia’s annexation of Crimea, targeting 735 entities as well as restrictions in trade in energy and defense products and selected financial restrictions. Sanctions have also been applied by the U.S. against Russia in relation to cyber activities and alleged election influence.

In 2022 ahead of the conflict’s start the Biden administration issued an Executive Order covering trade with the Luhansk and Donetsk regions, while the U.S. Treasury Department widened its sanctions against state-owned banks. Allies in the G7 applied similar measures.

Since the start of the conflict, the rate of sanctions application has widened significantly. Measures have included:

What’s different about these sanctions versus the ones from the past?

The sheer breadth of types of sanctions and industries affected differentiates the sanctions against Russia compared to other sanctions used in the past fifty years.

The block on Russia’s central banking assets is notable in undermining Russia’s aims to build a “fortress balance sheet” ahead of the other sanctions being applied. Other methods of self-defense, including payment systems, may prove more effective.

There’s also an unprecedented degree of multilateral cooperation including states that have historically been considered as neutral.

Actions by corporations to withdraw their activities from Russia, for example including aerospace servicing and ocean shipping firms’ services, has provided a second layer of pressure on Russia’s ability to trade. 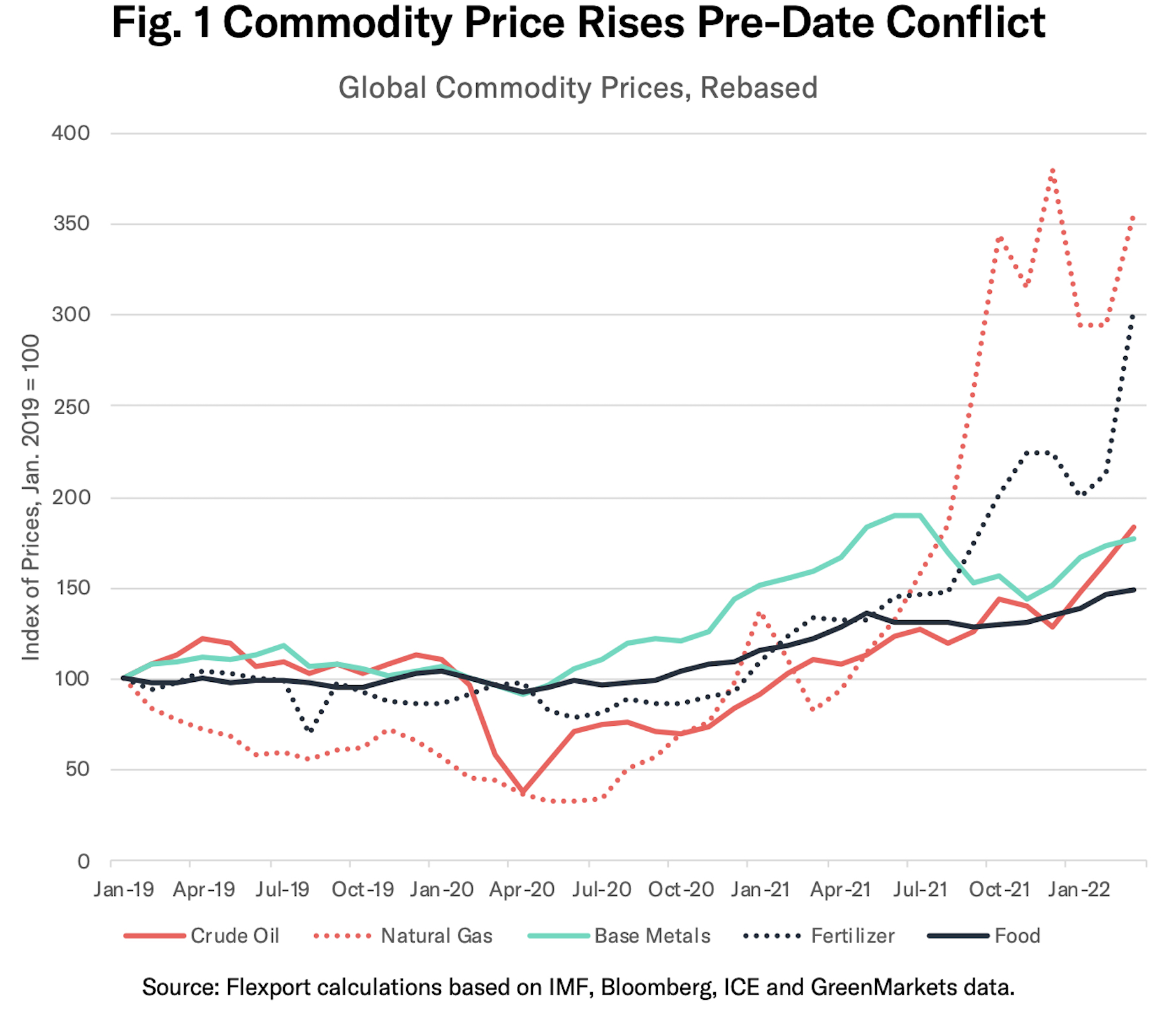 The blow-back for the global economy is also unusual. As flagged above, countries typically look to mitigate the impact on their own economies of sending sanctions. Figure 2 above shows the development of commodity costs ahead of and during the first month of the conflict. That’s not just included rapid rises in energy costs but also rising food prices, both of which are highly visible to voters.

Sanctions Could be Here for the Long Run

How long might the sanctions against Russia remain in place?

The length of sanctions being applied depends on the outcome of the conflict and the precise mechanisms used to put the sanctions into place.

For example, the U.S. withholding of Russia’s MFN benefits will be enacted by an act of Congress. Those can prove challenging to unwind - for example the Jackson-Vanik Amendment which applied sanctions against the Soviet Union was not removed until 2012.

The effectiveness of the sanctions will also be a factor, for example whether Russia can adapt to being less import-reliant or swap its export sales to countries that are not applying sanctions or that are willing to accept products at significant discounts. 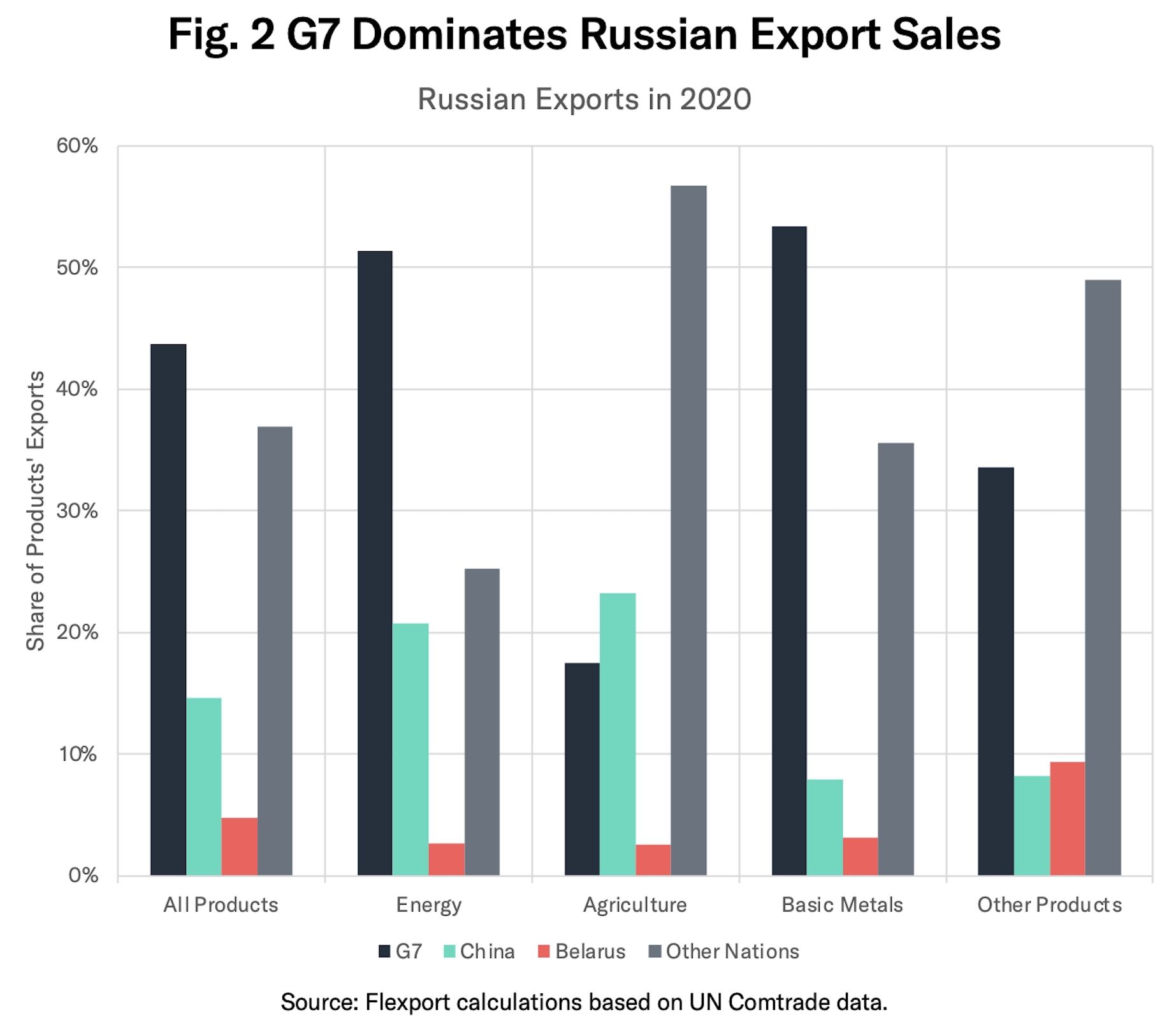 That may prove easier for globally tradable commodities such as oil and cereals than engineered products such as specialty steels, automotive components or scientific instruments.

It’s worth noting that energy, agricultural (food and forestry) and metals commodities accounted for 70% of Russia’s export earnings in 2020. As shown in Figure 4 above, Russia relied on the G7 for 44% of its exports in 2020 while China represented 15% and Belarus 5%.

The degree of willingness of sanctions senders to sustain economic costs in the face of a frozen conflict, particularly with regards to commodities sourcing and pricing of energy commodities, may prove to be a dynamic factor too.

In conclusion: The sanctions used against Russia in connection to the Ukraine conflict are more widespread than past actions and may remain in place for a long time.