Steel Yourself for CBAM - The Way Ahead

The EU is committed to implementing the Carbon Border Adjustment Mechanism (CBAM). How will companies be affected? What hurdles does implementation face? This is the second of a series of reports looking at CBAM’s potential impact on global supply chains. It focuses on the basics behind CBAM and general challenges faced by the corporations involved.

In the first part of this two part report on the outlook for the EU’s Carbon Border Adjustment Mechanism (CBAM) we identified the origins of CBAM, the goals of the program, and the products covered. This report tackles the impact on firms importing to the EU, as well as outlining several strategies companies can consider.

Carbon reporting for the CBAM is projected to start in 2023, adding administrative burden for companies, while the tax is likely to come into force in 2026. Very little of the program is set in stone, however, as while CBAM has been approved by some bodies, member state approval may require changes to the final details. This regulatory uncertainty may complicate importers planning efforts.

With the first stages of CBAM potentially coming into effect in 2023, companies importing carbon intensive goods will have to track and report the emissions of those goods and maintain a balance of carbon certificates throughout the year. In the current implementation, the price of CBAM certificates will be set at the average weekly price of the EU’s cap and trade auctions, essentially pulling imports into the program.

There are several strategies that firms could employ as the regulations near implementation.

In steel, for example, importers may find it more cost effective to import goods that are more expensive per ton, like steel pipe fittings shown in Figure 1, which will have a lower effective tax rate, instead of steel pipes. The same amount of steel will likely have the same or similar carbon cost, so selling that amount for higher prices minimizes price exposure. This could have an inadvertent consequence, however, as it incentivises higher value production outside the EU.

The risk of this, however, is that the CBAM calculation is adjusted or more complex goods are added to the program. 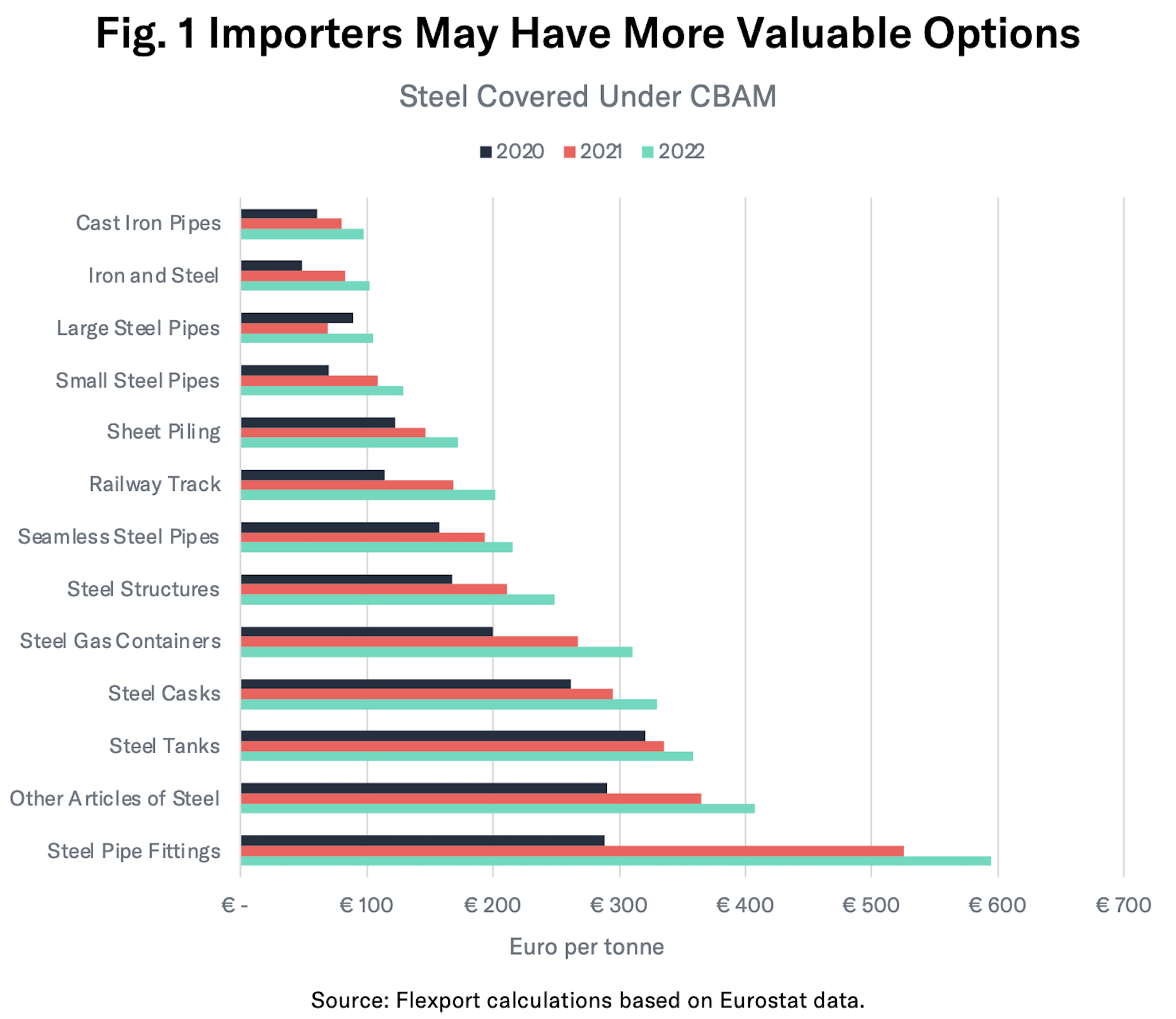 Recent updates from the European Parliament have proposed an expansion of the program to cover hydrogen, polymers, and organic chemicals. The proposal also includes moving up the start of CBAM and adding in indirect emissions to the calculated carbon total.

The program may face more scrutiny as it comes up for consideration among member states and the parliament as a whole, especially if the economy worsens over the coming year.

Finally, CBAM will likely raise concerns at the WTO.

Other issues may stem around WTO tariff commitments that EU countries have made, but the EU is likely to maintain that CBAM is an internal policy and not a tariff covered by the WTO.

In conclusion: The Carbon Border Adjustment Mechanism is designed to level the playing field for EU manufacturers versus their non-EU competitors. It will likely have similar effects to an import duty and will require companies to reconsider the structure of their supply chains. Reshoring to the EU is one option, offshoring production of higher value-added products is another. Precise rules depend on the details of implementation, which will not be a work of moments.