The Chinese government has locked down Shenzhen and Dongguan, reducing manufacturing activities, trucking and air freight in the region. The largest export manufacturers in the region include consumer electronics (phones, computers and monitors), furniture and toys.

The city authorities of Shenzhen and Dongguan announced general lockdowns from March 14 to March 20. Authorities in Shanghai are also applying similar measures.

The situation is dynamic, with detailed updates available from Flexport’s blog, and will likely have an impact on: 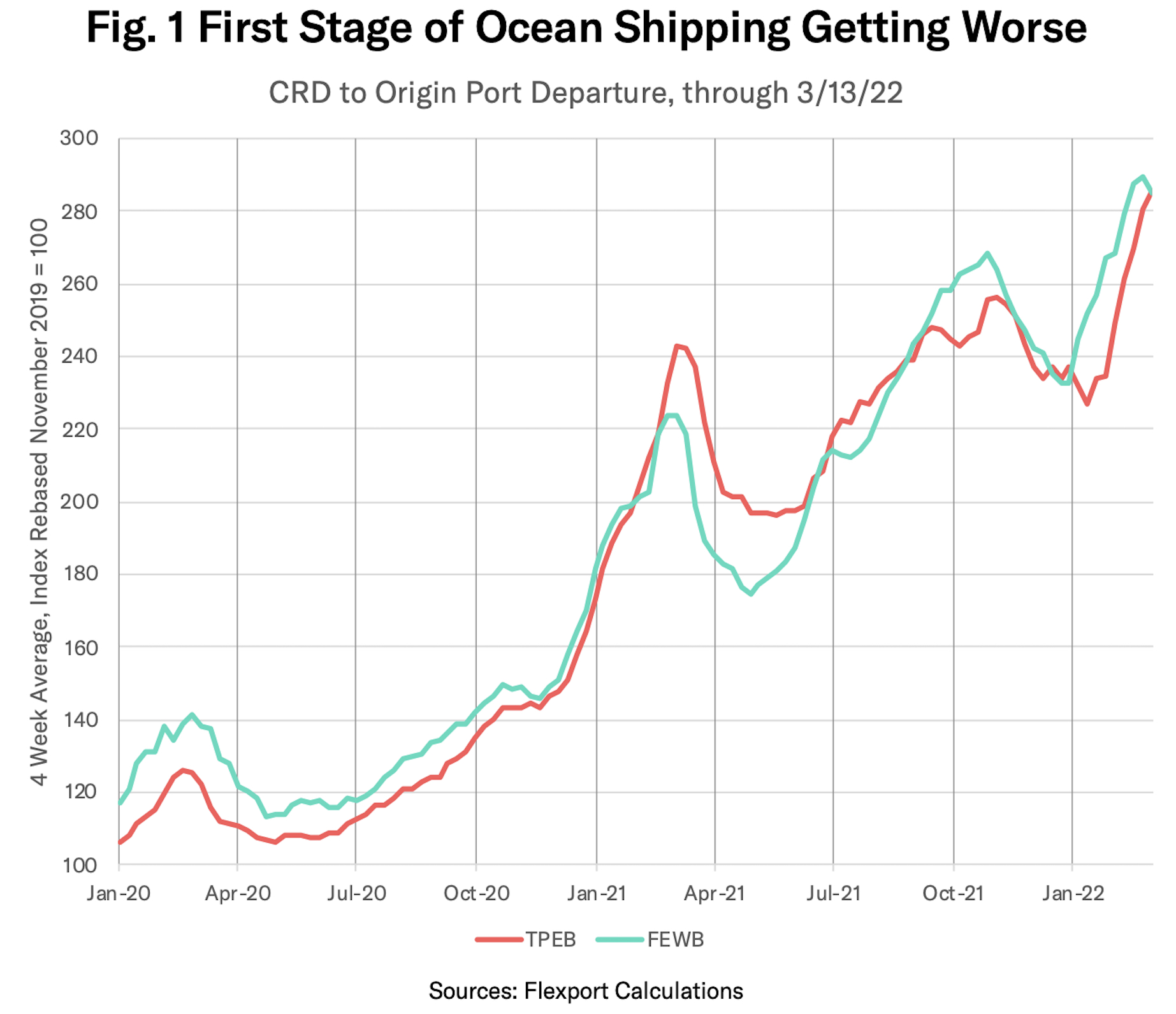 While the regional maritime ports remain open, the delays in transit of goods to the ports may cause increased delivery times. As shown in figure 1 above, the first stage of ocean transportation from Asia to North America had already hit an all-time high before the latest lockdowns.

For context, the port of Shenzhen accounted for 28.8 million TEUs or 11.5% of Chinese maritime container handling in 2021 according to official data. On the basis of 2020 data Shenzhen’s 26.5 million TEUs compares to 758 million TEUs of global shipping, i.e. 3.5% of the total, according to World Bank data.

Electronics at the Epicenter

Exports by air from the region are led by smartphones and computers. Seaborne shipments meanwhile are led by toys and furniture, including electric lighting, as well as computer monitors and televisions. 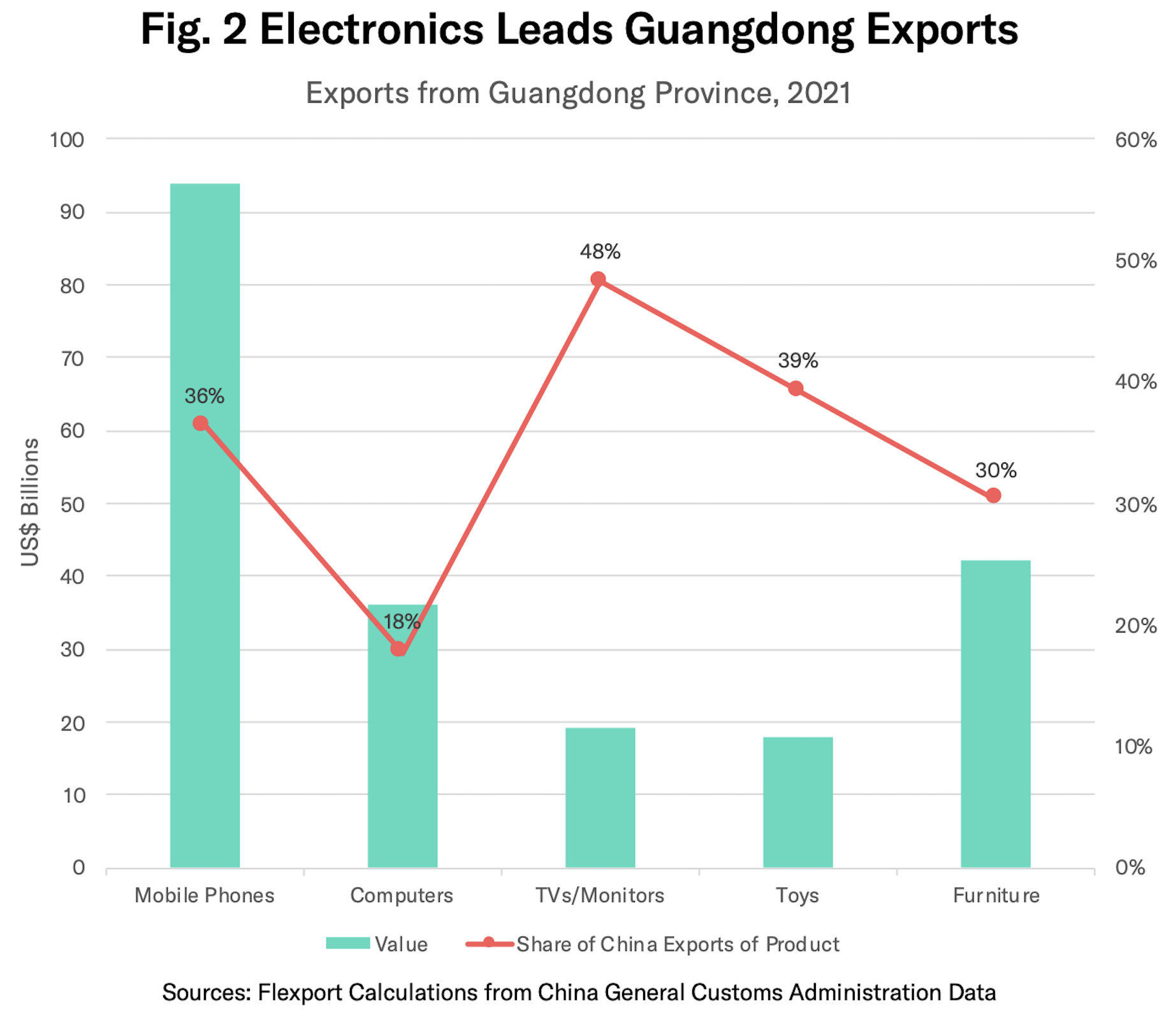 The wider Guangdong region of which Shenzhen and Dongguan are a part, as well as Guangzhou and Foshan which have yet to be affected, accounted for $94 billion in telecoms exports (HS 8517, source China General Customs Administration) in 2021. That equated to 36% of total exports of telecoms products from China, as shown in Figure 2.

The exposure for computers (HS 8471) was lower at 18%, though for peripherals including monitors/televisions (HS 8528) the region accounted for 48% of exports. Among the major non-electronics products the region represented 39% of exports of toys (HS 9503) and 30% of furniture (HS 94).

The Chinese government remains committed to its existing policies regarding containing COVID-19. That raises the risk that other Chinese cities will face lockdowns going forward. Shifting manufacturing within the country is largely impractical from a short-term perspective given the locally-integrated nature of electronics supply chains.

One option is to switch sourcing to other countries. In the mobile phone segment the major manufacturers already have factories in India and Vietnam that could be used to supply the most profitable markets if the operations and products are interchangeable. Most facilities however have product specialization, again limiting the potential for easy switching. 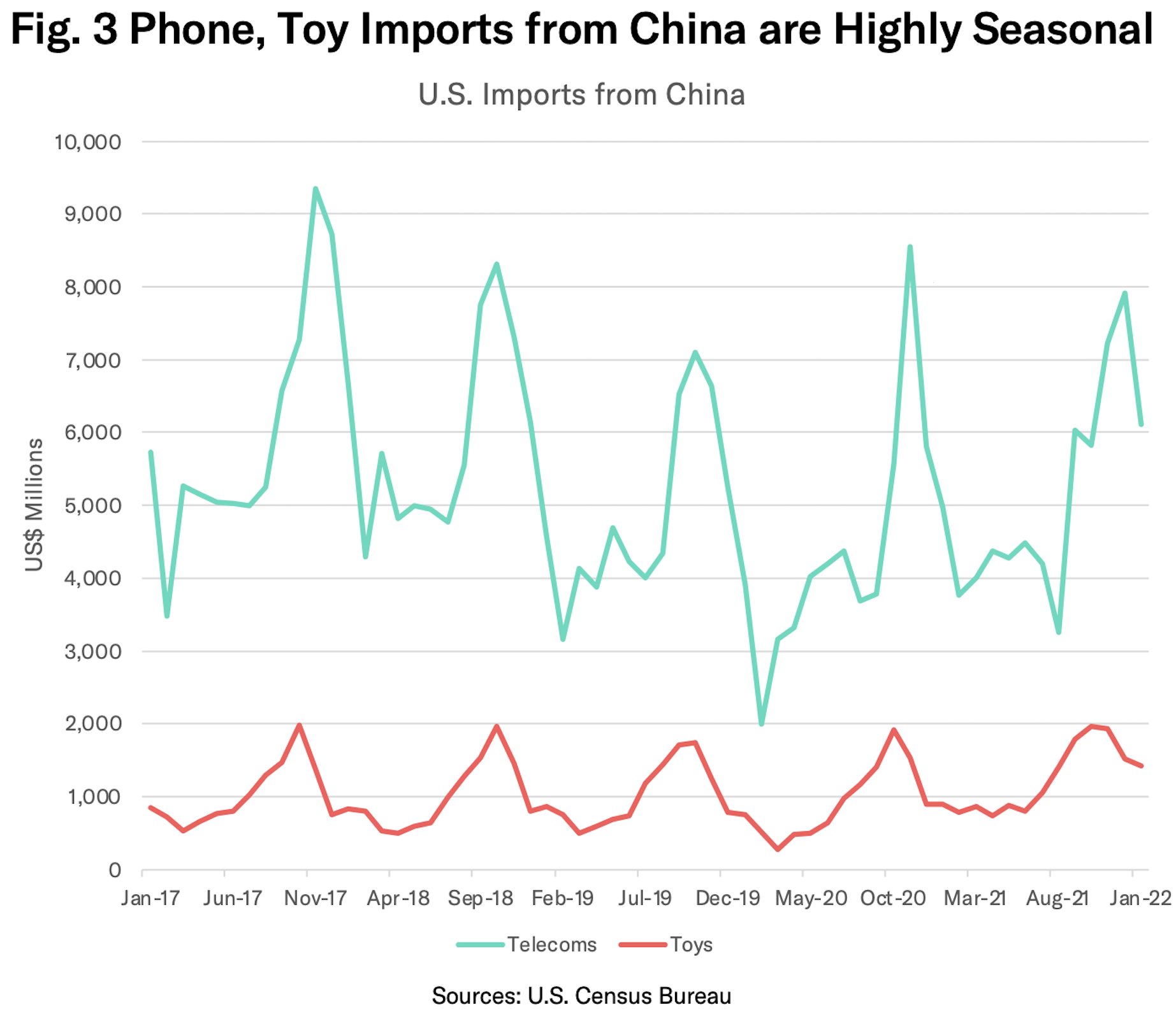 The seasonal nature of exports of some of the consumer products produced in the region means manufacturing for delivery into the western holiday season, shown in Figure 3 based on U.S. imports, will scale up from April onwards (source U.S. Census Bureau). An early end to the lockdowns may therefore prove critical in avoiding supply chain and inventory disruptions later in the year.

In conclusion: A lockdown in Shenzhen may disrupt key electronics and consumer goods supply chains. If it is limited in time to a week or two that may mitigate the impact on deliveries for the western holiday season.