This past week offered two detailed reports on the state of U.S. inflation, the Consumer and Producer Price Indices. Lower numbers cheered analysts and investors, but were they looking at the right numbers? We sort it out.

In Focus - Three Dimensions of Inflation 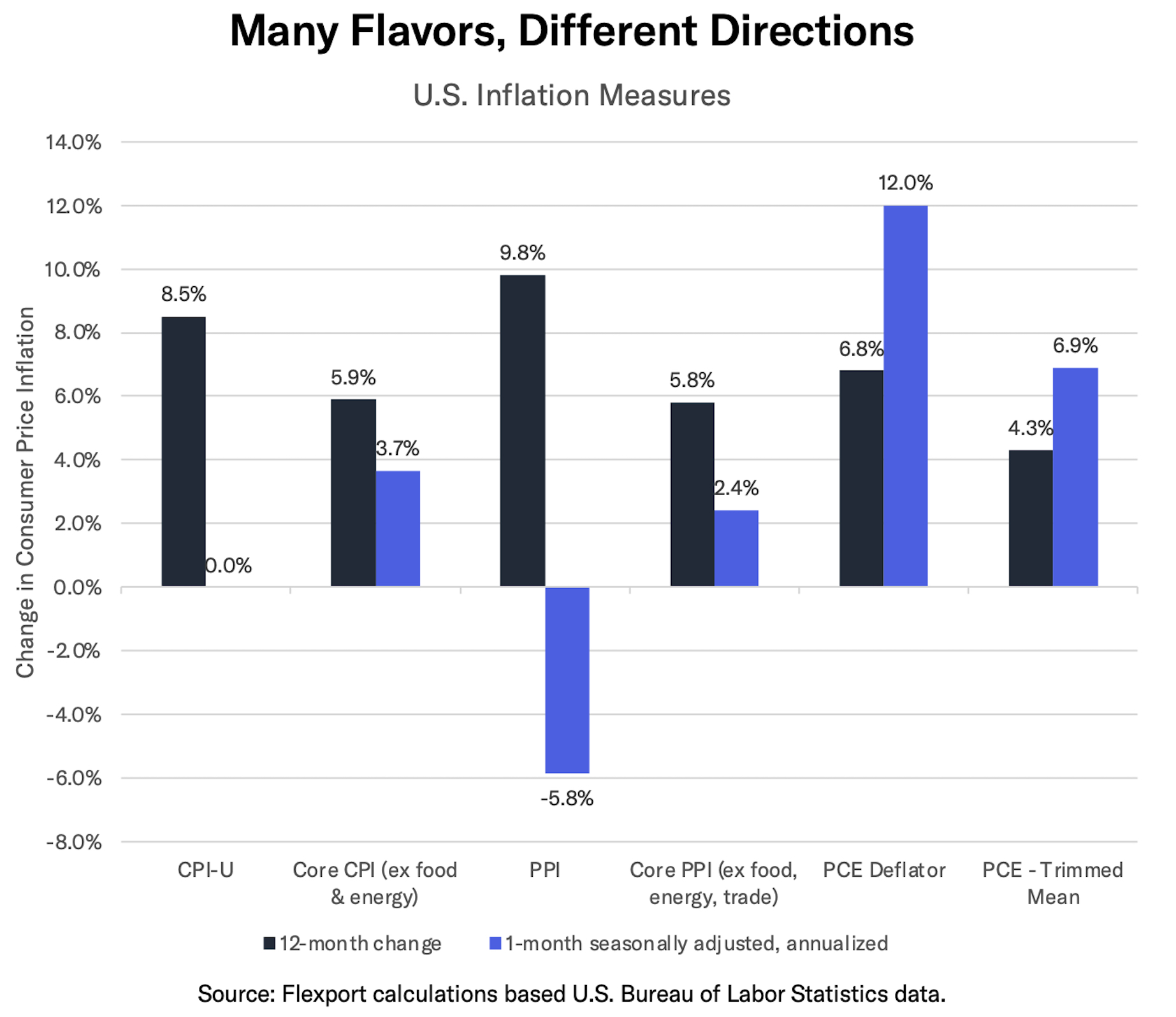 For those hoping to put the surge in U.S. inflation behind them, major data releases this week offered some cause for hope. The actual level of the Consumer Price Index (CPI-U) was unchanged from June to July, and the 12-month rate of CPI inflation fell from 9.1% in June to 8.5% last month. More signs of moderation came from the Producer Price Index (PPI) for final demand, which fell by 0.5% from June to July.

This is an epoch of contradictory and confusing data, with GDP and unemployment rates falling in tandem. Inflation is no different. Each release includes a slew of numbers, some much more encouraging than others. To sort things out, here are three dimensions to put the numbers in context.

1. The Makeup of the Bundle. Inflation would be much easier to measure if the prices of different goods and services moved in lockstep. Instead, there have been wild variations.

The chart above, in the left column of each pair, gives the 12-month change for three indices: July figures for CPI, Core CPI, PPI, and Core PPI; June figures (latest available) for the Personal Consumption Expenditures deflator (PCE) and a core equivalent, the “trimmed mean” version of PCE.

The inflation measures range from 4.3% for trimmed mean PCE to 9.8% for PPI. Note that all of these figures are at least double the Fed’s target of 2.0%.

Is one of these figures better than the others? There’s a general sense that the “core” numbers are less volatile. The last couple months have seen dramatic swings in the price of energy commodities (gasoline and fuel oil), for example: up 10.4% from May to June, down 7.6% from June to July. Those are monthly swings, not annualized.

If one is interested in predicting what will happen with interest rates, Fed officials have expressed a preference for trimmed-mean PCE. Those numbers are older, but nowhere near as encouraging as CPI or PPI.

2. The Time Span of the Change Suppose prices leapt up by 10% from July 2021 to August 2021, but then stayed flat for every month thereafter. How much inflation would we be experiencing? A 12-month measure for July 2022 would say 10% – that’s how much higher the price index would be over July 2021. But in this hypothetical, prices wouldn’t have budged for 11 months.

This is the comparison between the left and right column for each pair in the chart. The right gives the latest monthly figure, adjusted for seasonality and annualized. Thus, a 0.3% change in core CPI from June to July 2022 annualizes to a 3.7% annual rate.

Which measure is better? Each has its purposes. The 12-month figure can be driven by moves that have subsequently faded, but it also smooths month-to-month volatility. The annualized last month captures the latest movement, but can swing wildly from month to month.

To predict likely Fed moves, there is a clear preference here: the relevant part of the Fed mandate is to ensure price stability. That means our winner is the change in prices, not a slowdown in inflation. The likely Fed reaction to a fall in CPI from 9.1% to 8.5% will not be “Mission accomplished!” but rather “4.3% is far above the target inflation rate of 2.0%,” drawing on the trimmed-mean PCE deflator.

And this is essentially what Fed officials said.

Recent Flexport research reports include a deep-dive into the state of the German economy. We consider the structure of economic activity versus the wider EU, state of price inflation, the challenges from natural gas shortages and the potential for the export economy.

Euro area consumer prices rose by 0.1% sequentially in July, including core CPI which fell by 0.2%. Core CPI increased to 4.0% year over year from 3.7% a month earlier.

China’s exports increased by 18.0% year over year in July, matching the growth rate in June and beating trade economists’ expectations for growth of 14%.

Taiwan’s exports also outstripped economists’ expectations with growth of 14.2% year over year in July versus an 11.7% increase forecast. Shipments of semiconductors led the way, with growth of 17.4%. The government has cited a “high degree of uncertainty” for exports given geopolitical tensions.

The preliminary University of Michigan consumer sentiment index for August showed an increase from its all-time low in July. All components of the expectations index moved up.

The EU and South Korea have indicated that the electric vehicle subsidies contained in the new U.S. Inflation Reduction Act, may breach WTO rules. The IRA has prescriptions for eligibility based on manufacturing origins, which may bar some U.S.-produced vehicles from receiving the payments.

U.S. Treasury income from customs duties (tariffs) reached $8.53 billion in July. That was down 13.6% on a year earlier while goods imports rose by 18.4%. The main contributor to the tariff take likely remains Section 301 duties on imports from China, as discussed in Flexport’s latest State of Trade webinar.

The National Retail Federation predicts that U.S. imports of retail goods will slow on a year-over-year basis in H2’22. That’s equivalent to a 0.2% rise in imports and a 2.0% fall in Q4’22. The NRF is also concerned about disruptions due to “separate labor negotiations at the West Coast ports and the freight railroads.”

Crude oil flows from Russia to Hungary and Slovakia via the Southern Druzhba pipeline were temporarily halted while those to the Czech Republic remain suspended. The pipeline’s Russian owner blamed sanctions for disruptions to payments for the use of the pipe. Sanctions against Russian oil imports have had a delayed phase-in period.

The EU’s ban on imports of Russian coal took effect on August 11. Russia accounted for 46% of EU coal imports in 2021.

Chart of the Week - The Chips are Down 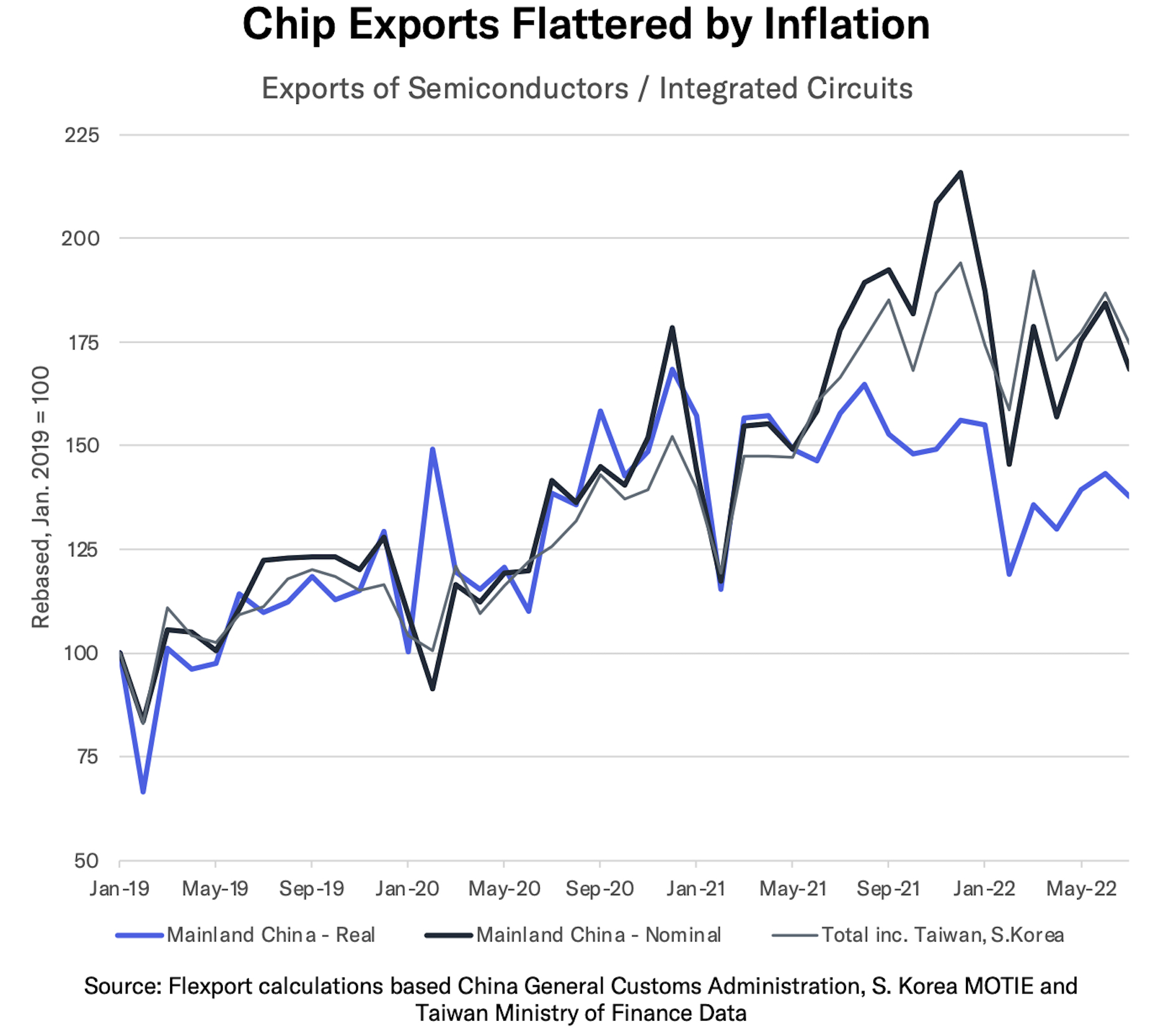 Is the boom in demand for semiconductors slowing? New data this week shows that exports of semiconductors from mainland China fell in dollar terms by 5% year over year in July in nominal terms (the black line in the chart above). That marks the first decline in at least three years. Shipments from South Korea increased by 2%, their slowest rate since July 2020. Exports from Taiwan increased by a healthier 17%.

The figures are flattered by the impact of inflation. As shown in the chart above, the volume of chips exported from China (purple line above) actually fell by 13% year over year. That extended a run of falling exports, on a volume basis, in six of the past seven months.

Exports are, however, still well above their pre-pandemic levels. In volume terms, China’s exports in July were 25% above the same period of 2019. In dollar terms, exports from mainland China, Taiwan and South Korea combined were 5% higher, compared to July 2019.