Flexport’s Logistics Pressure Matrix (LPM) gathers 10 data points in an attempt to provide a picture of the challenges facing logistics networks from the demand side and a view of ongoing activity on US-inbound routes. In the latest update, retail sales in the U.S. were unchanged in September versus August and may have fallen in inflation-adjusted terms. That may contribute to reduced pressure on networks. At the same time, shipping rates have fallen to their lowest since August 2021.

You can now receive the Weekly Economic Report for insights into global economic data, trade activity, industrial decision-making and government policy – delivered to your inbox every Monday – by signing up here.

The Methodology: The Flexport Logistics Pressure Matrix (LPM) brings together 10 data points clustered into two groups: demand measures covering consumers and industry; and activity measures which show the state of logistics networks. The measures are US-centric and mix a variety of weekly and monthly measures. The LPM is updated every Tuesday with the latest data points from the prior seven days. More details on the measures and the reasons for their inclusion can be found in our in-depth research report published January 21, 2022.

Week to October 18, 2022 Here are the latest updates to the Flexport Logistics Pressure Matrix. Full details and charts can be found below:

The reduced pressure implied by consumer conditions can also be seen in ocean shipping rates, which fell by 7.1% after Golden Week to their lowest since August 2021. The time taken for the first stage of ocean shipping – cargo-ready to origin port departure – improved and is now 44% below its peak. Air freight timeliness was unchanged at the lowest level since May 2021.

The Logistics Pressure Matrix is colorized in 10 grades from red (measure represents high pressure on logistics networks) to green (low pressure) relative to the period from January 2019 to date. So, falling retail sales tends to be “green” as it represents reducing demand pressure on logistics networks while a high level of deflated imports would be “red” in indicating reduced flows. 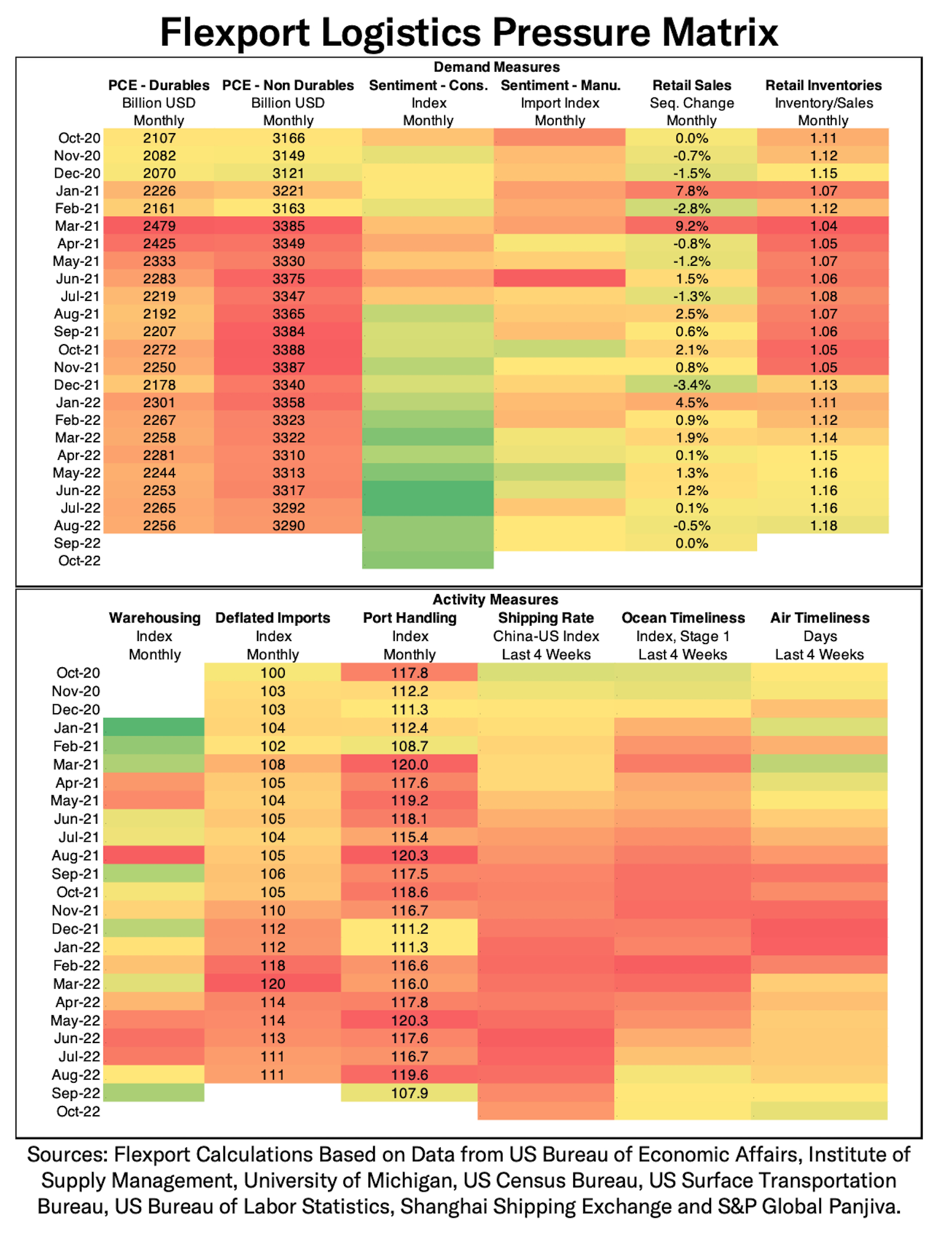 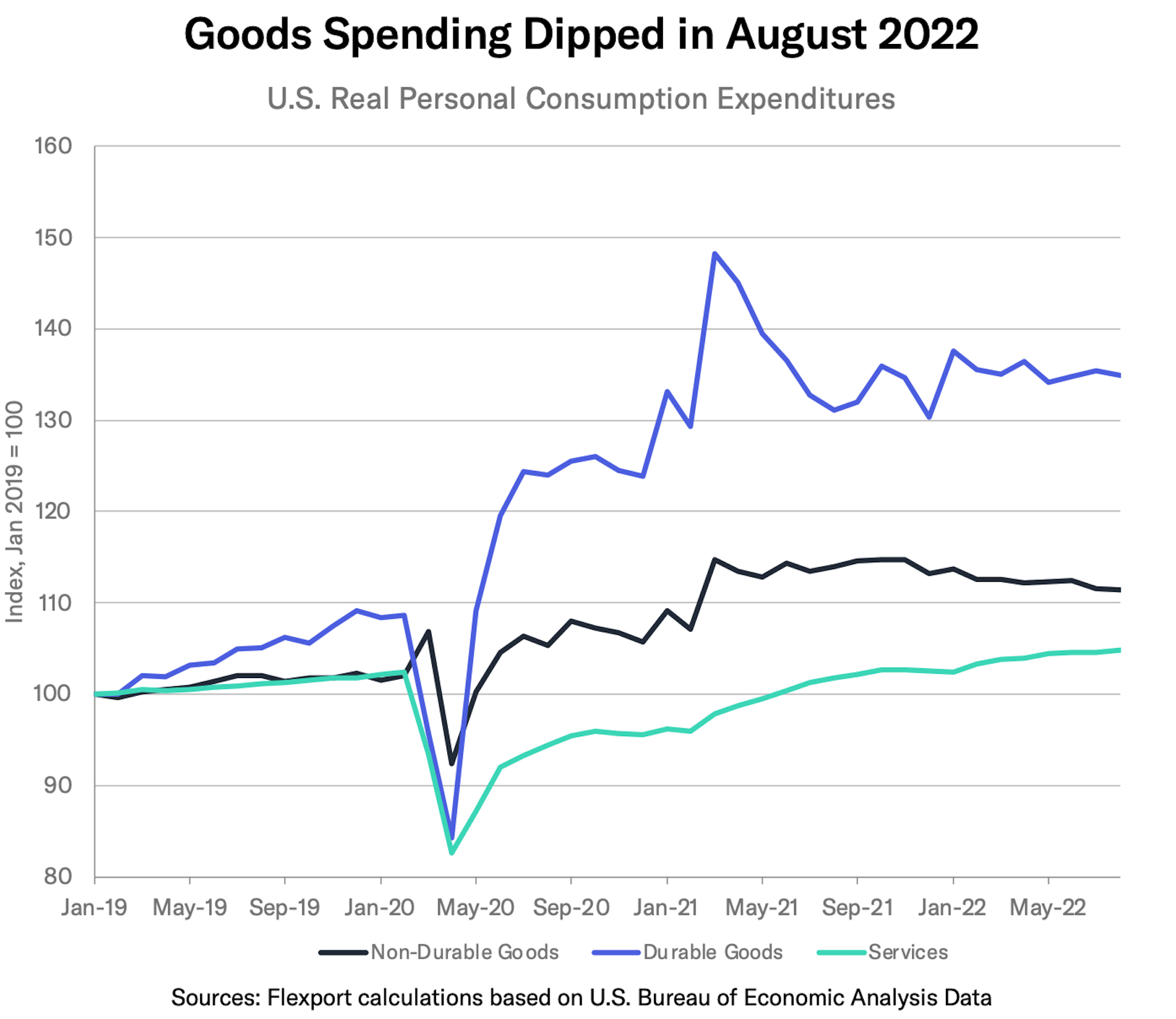 Personal consumption measures were updated to use real data in line with rising inflation, giving a more complete view of activity. A decline in the order of over one percentage point per month over a protracted period would be needed to signal a clear relaxation of demand pressures on logistics networks. 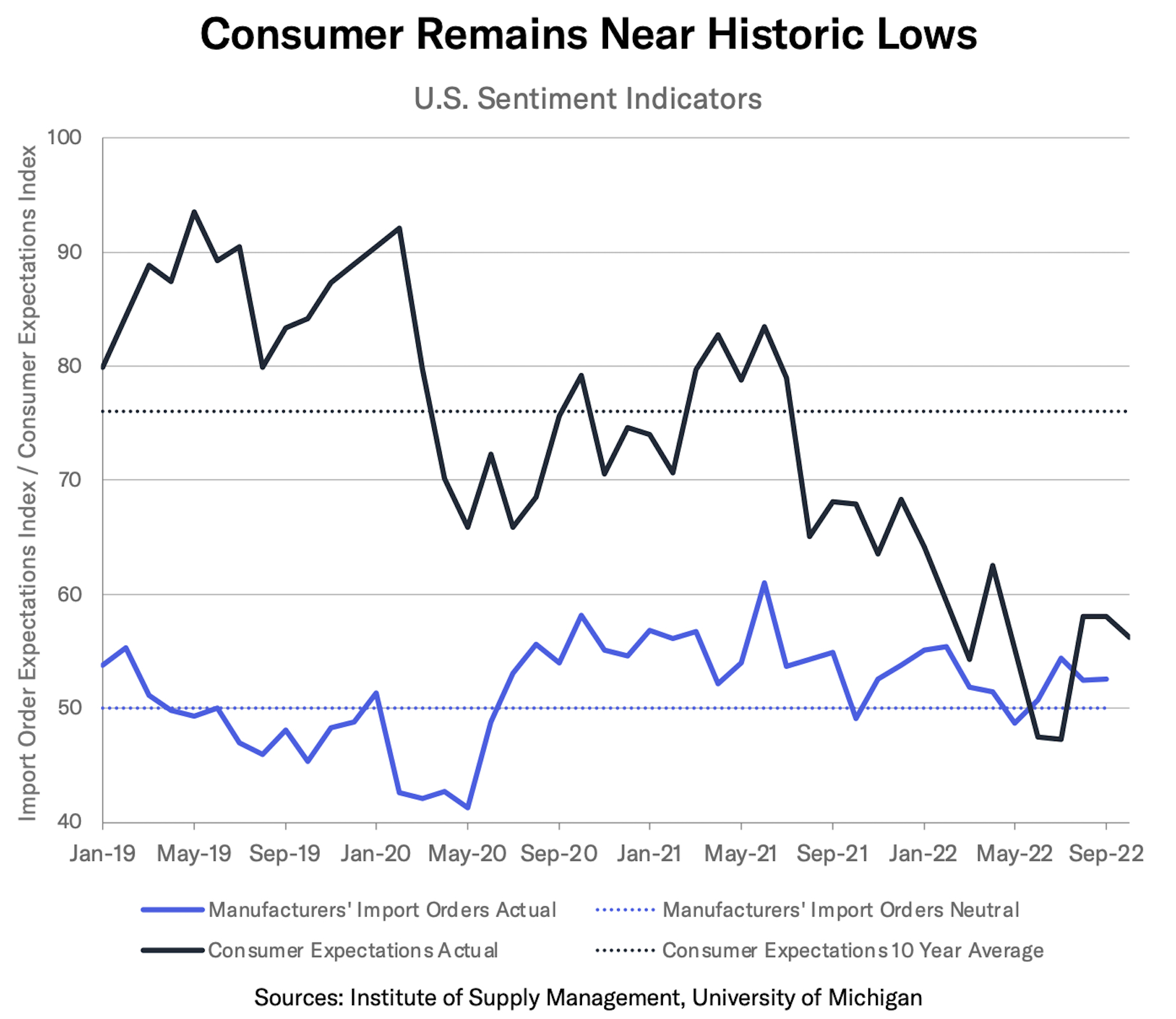 Forward-Looking Confidence Measures (Updated October 3, 2022): Consumer expectations dipped in October after improving for two months. That leaves them near their highest since May but still well below levels from earlier in the year. In turn, that may represent consumers' uncertainty regarding ongoing challenges from inflation and geopolitics.

Industrial import expectations were broadly unchanged in September versus August at 52.6. A sustained decline below 50 (the level indicating a neutral outlook) would be needed to assume reduced pressure on logistics networks. Notably, though, overall manufacturing activity fell to its lowest since May 2020, while export orders have been falling since August. 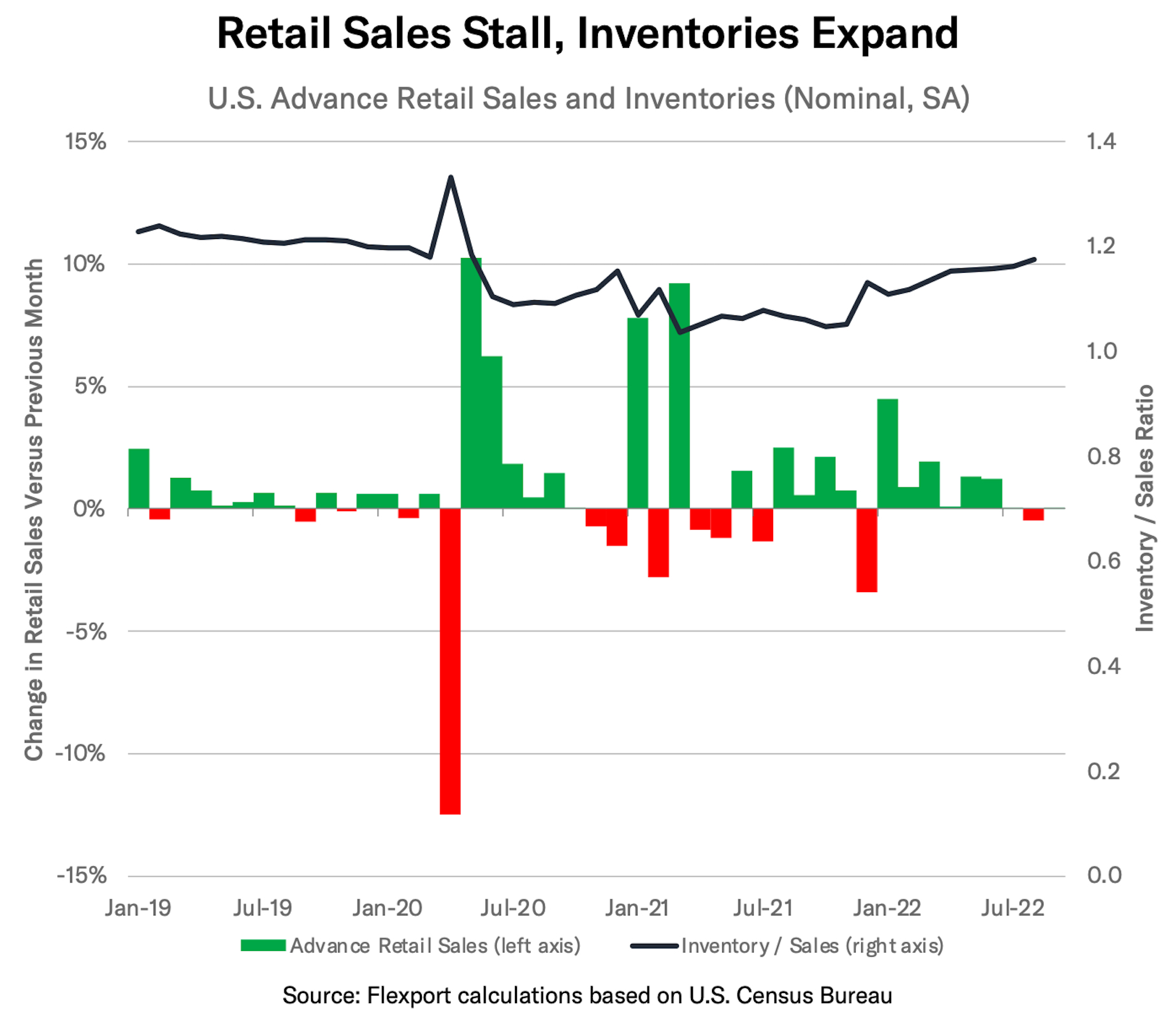 Retail Sales & Inventories (Updated October 18, 2022): U.S. retail sales, excluding autos, were unchanged in September versus August, while year over year growth dipped to 9.2% from a peak of 13.1% in July. For comparison, Consumer Price Inflation increased by 0.4% sequentially, suggesting real retail sales may have fallen. A sustained slowdown in real sales will be needed to reduce pressure on logistics networks.

Retail inventories increased 0.6% sequentially in August on a seasonally adjusted basis. That meant that the retail inventory to sales ratio for July increased to 1.18x. While lower than the 2009 - 2019 average of 1.24x, it is a marked recovery from the 1.06x which applied during 2021 until December. 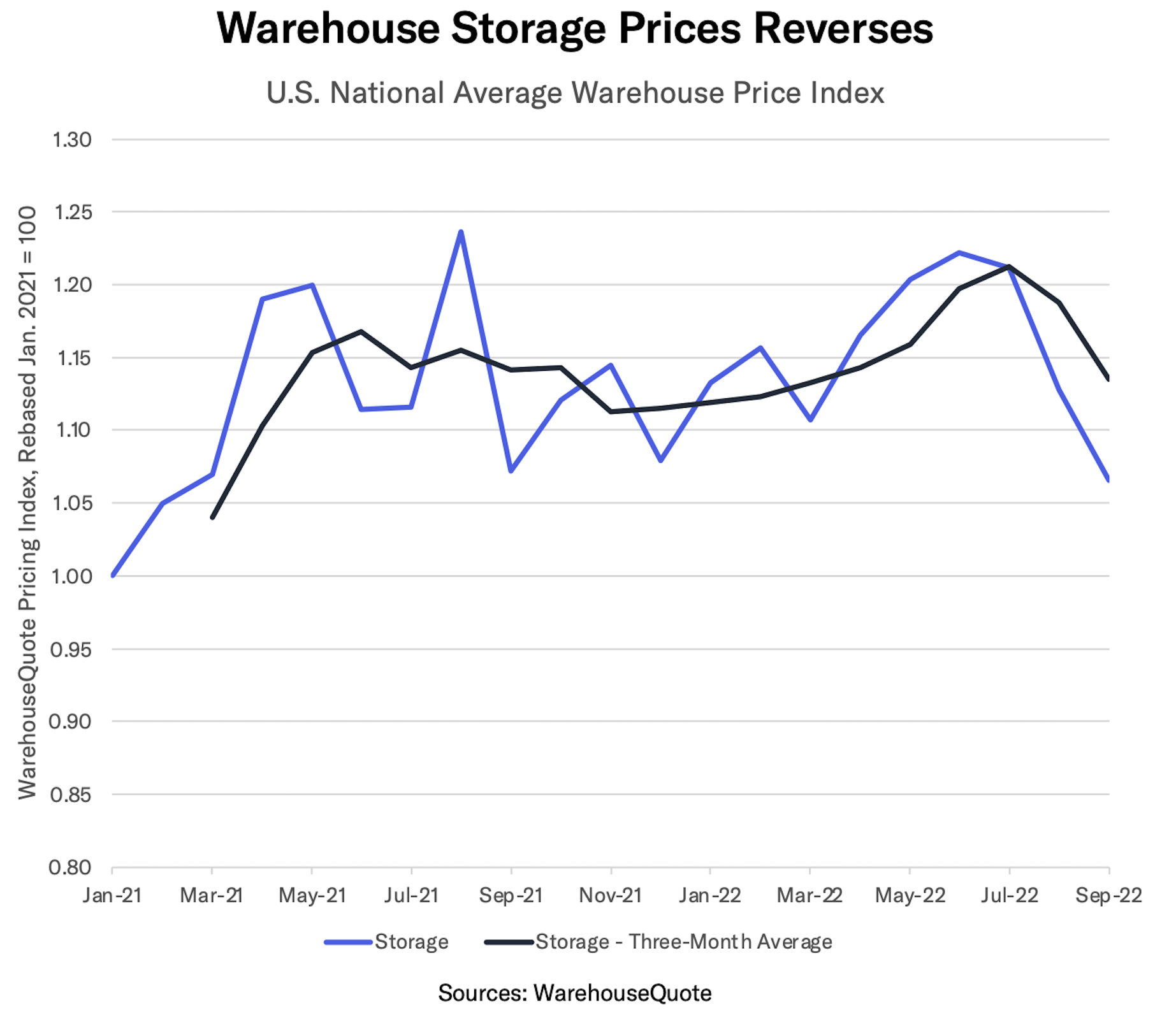 Warehouse Pricing (Updated September 20, 2022): The price of warehouse storage space dipped to the lowest since March 2021 in early September. While the series is volatile, it has now fallen for three straight months and is now 0.5% lower than a year earlier on a trailing three-month average basis. Lower warehouse pricing may represent reduced pressure on logistics networks as firms work down inventories. For more information please see our warehouse pricing explainer report. 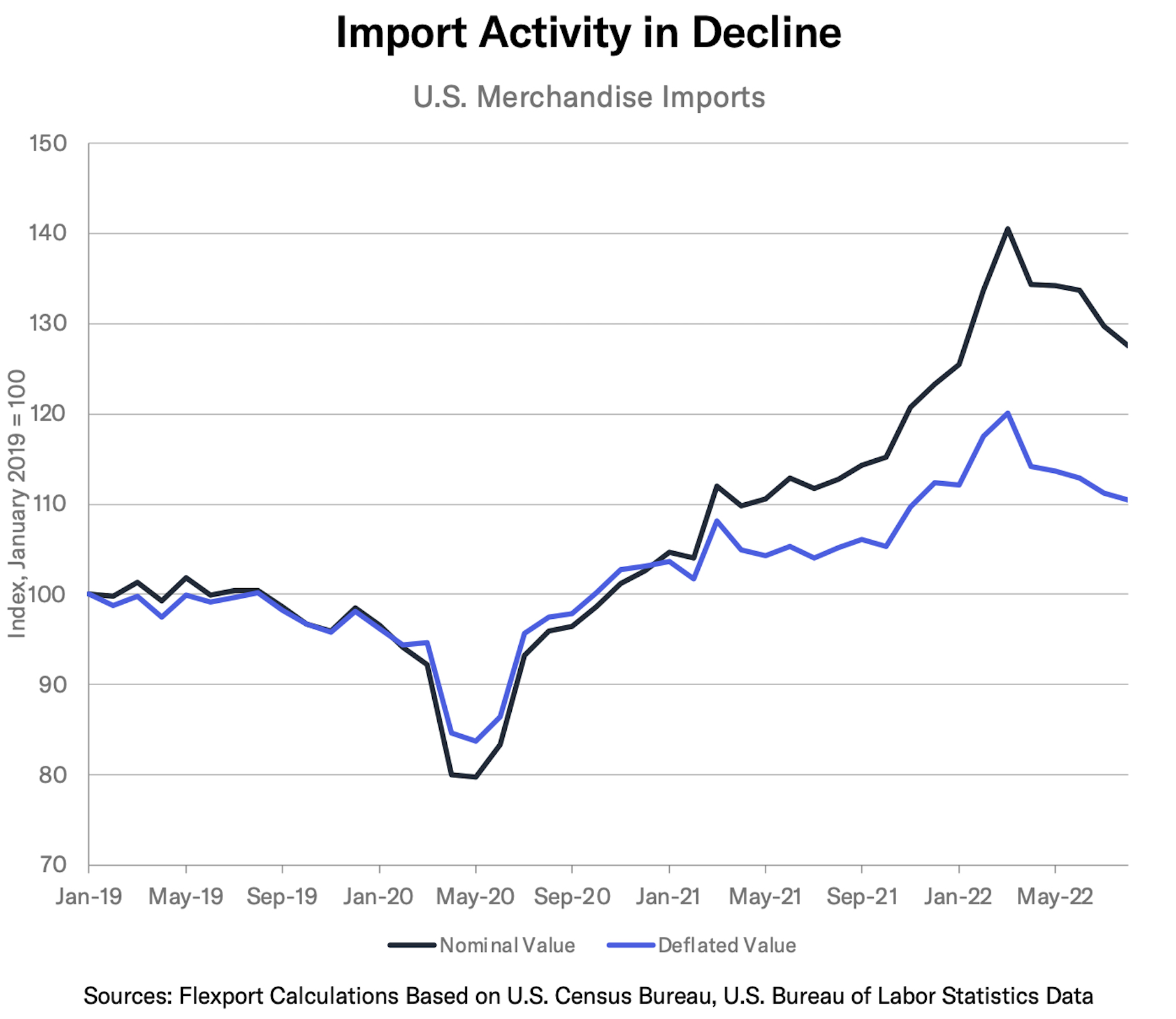 Deflated International Trade Data (Updated September 28, 2022): U.S. imports fell by 1.7% sequentially in August versus July, but remained up by 13.1% compared to August 2021 on a seasonally adjusted basis. Commodity price inflation likely played a part, especially energy which may be a lagging component of the deflator. The change in value of imports less the change in import prices fell by 1.0% in August vs. July. That left the index of deflated imports at 110.5 where 100 indicates the level in January 2019. 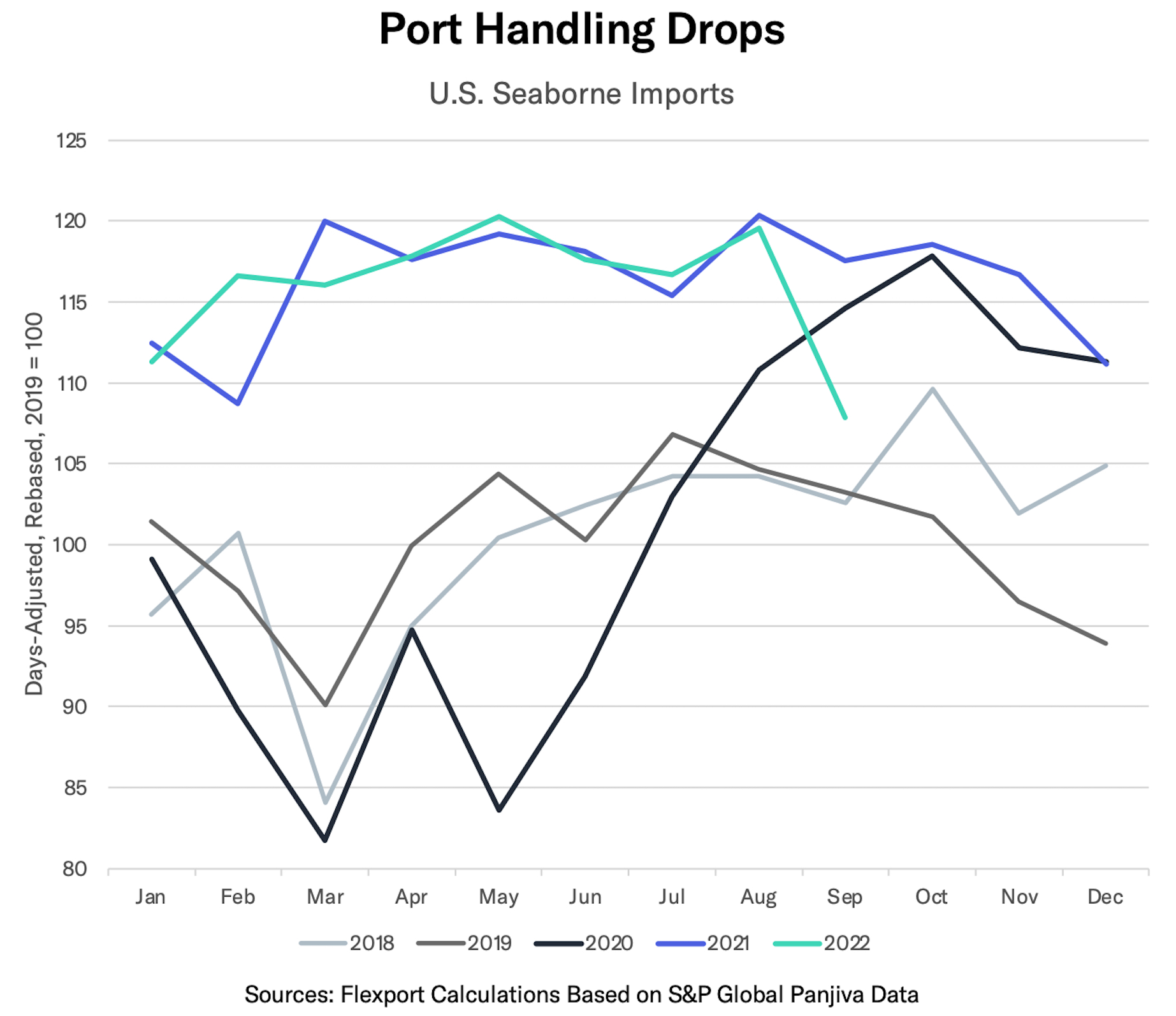 U.S. Port Handling (Updated October 11, 2022): Containerized, ocean freight imports to U.S. ports – adjusted for days in the month and rebased to the 2019 average equalling 100 – shows containerized freight imports to all U.S. ports fell by 9.8% in September versus August. That was the largest seasonal decline for September versus August since at least 2007.

It leaves shipments 8.2% lower year over year, indicating reduced pressure on ports, and may be the result of companies scaling back their shipments after refilling their inventories. Shipments are, nonetheless, still 4.5% higher than the same month of 2019. 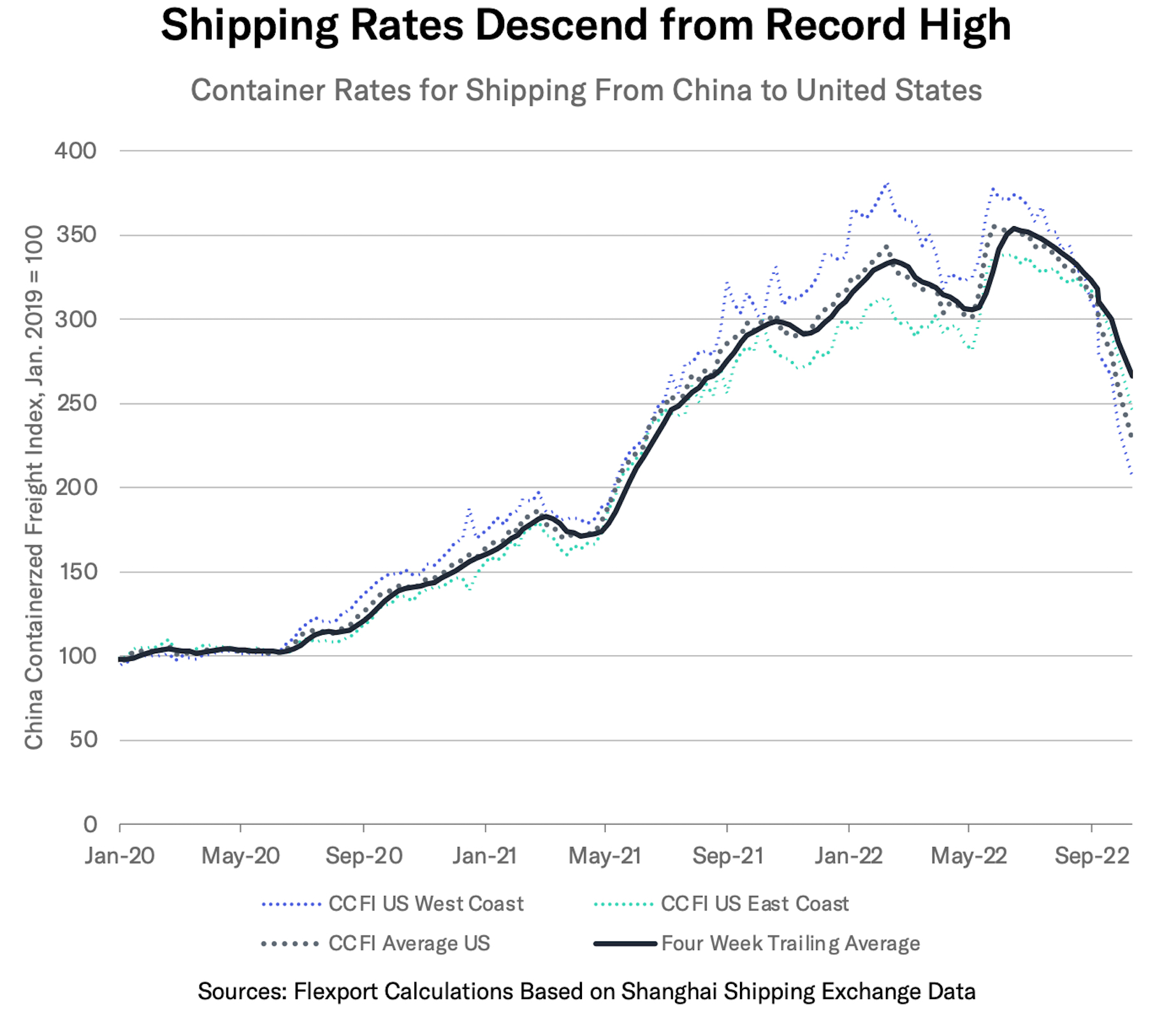 China-to-U.S. Shipping Rates (Updated October 14, 2022): The four-week trailing average of the Shanghai Shipping Exchange’s China-US West Coast and China-US West Coast and China-US East Coast indices fell by 7.1% in the week to October 14, marking a 16th straight down-week after six weeks of improvements left the measure at a record high. Rates are now 24.2% below their June peak and are at their lowest since August 20, 2021. Declining shipping rates are a sign of falling logistics congestion. 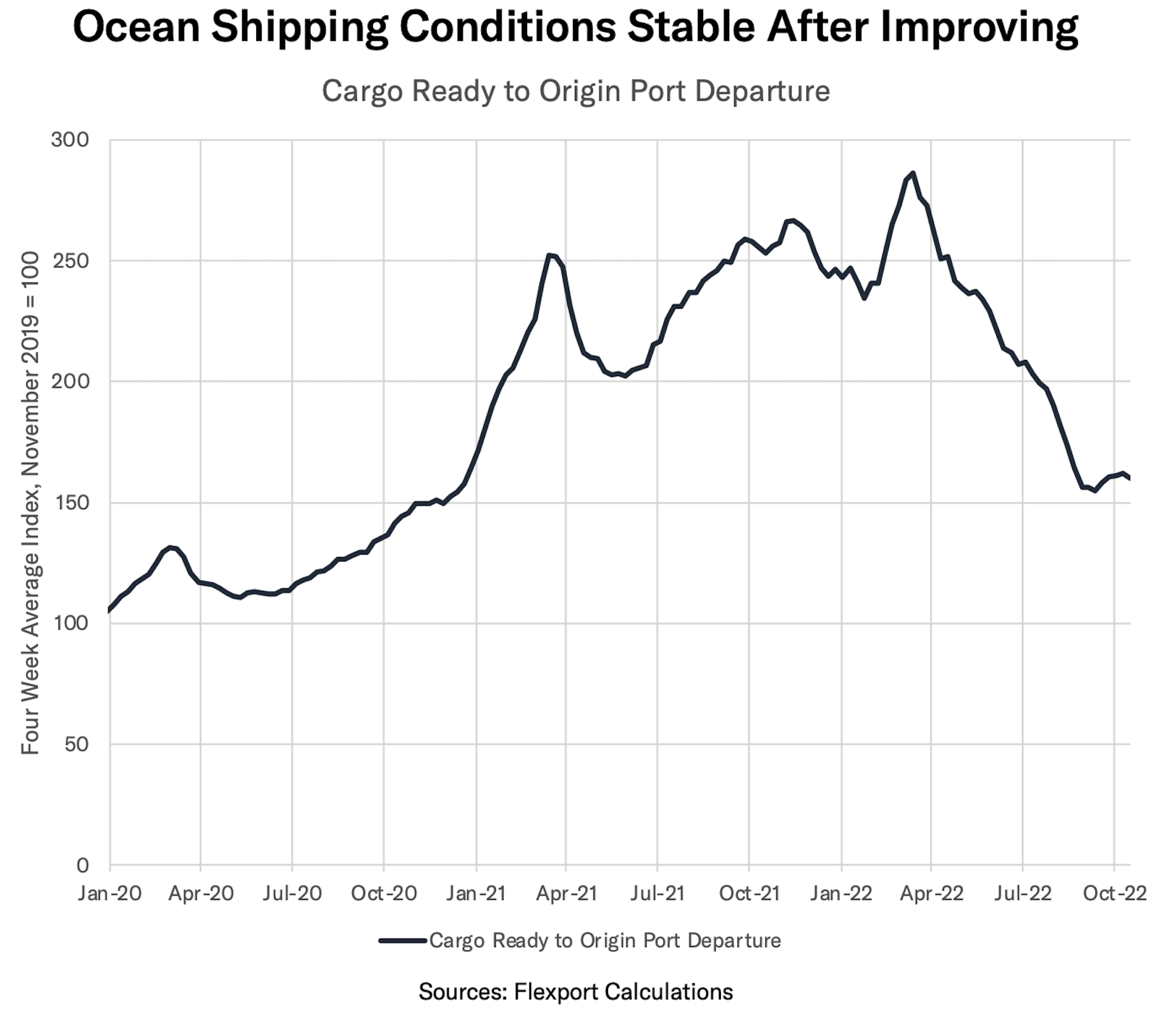 That leaves the measure 44% below its peak and at its lowest since December 2020. Some caution is needed though given that there is seasonality in the series and given that recent improvements may have reflected reduced manufacturing in Asia. Data for the complete ocean transit journey can be found in Flexport’s Ocean Timeliness Indicator. 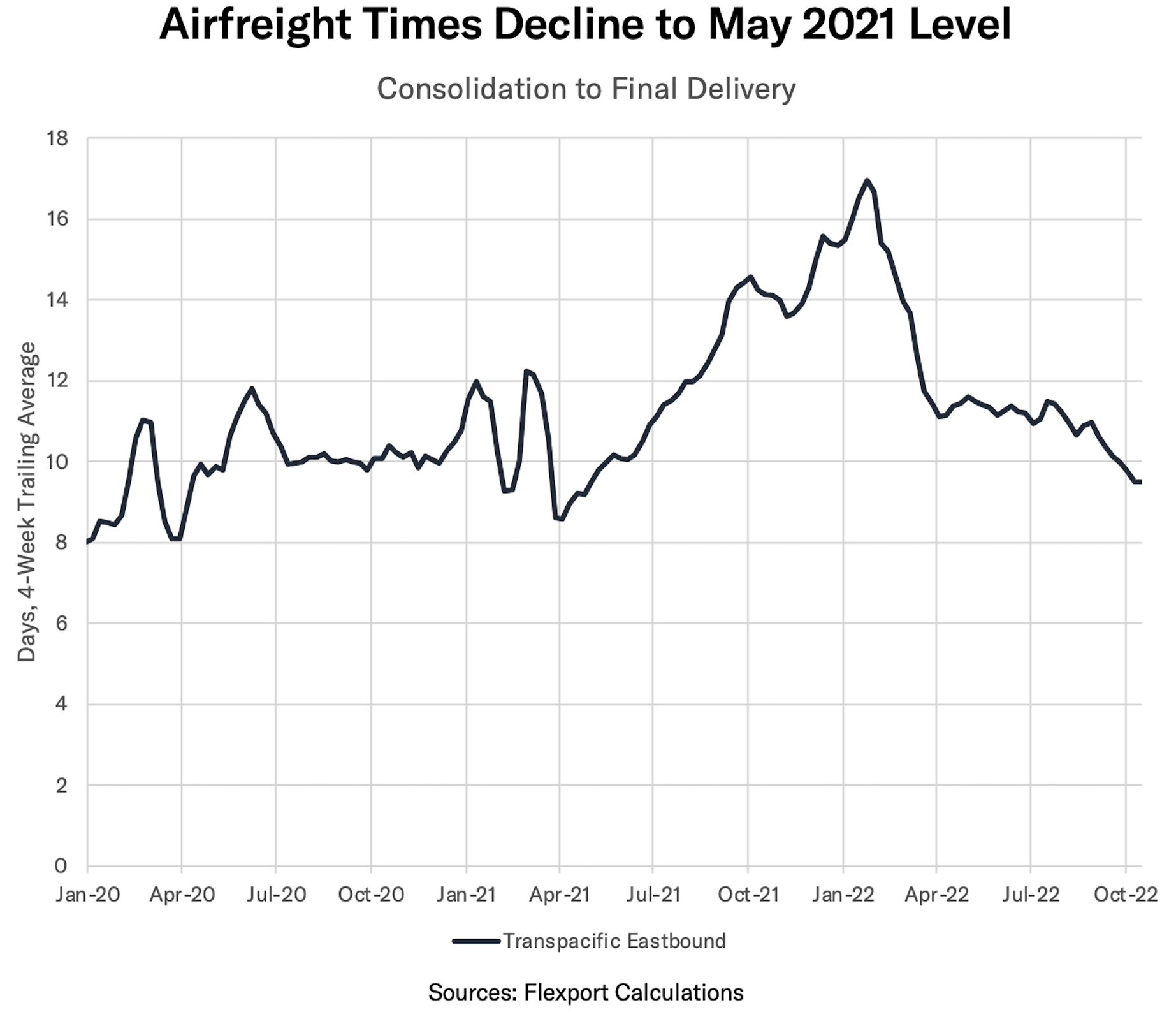 Air Freight Handling Times (Updated October 16, 2022): The Flexport Air Timeliness Indicator (ATI) shows the time taken to go from cargo consolidation to final delivery in days, averaged over the prior four weeks. In the latest reading the time taken to transit Transpacific Eastbound airfreight was unchanged at 9.5 days. That’s the lowest since early May 2021.