Too Fat to Fly: Why There’s No Cargo Version of the Airbus A380

The double-decker A380 is the world’s largest civilian aircraft. With a wingspan that’s 10 meters longer than the Boeing 747’s, it can hold as many as 605 passengers. But unlike the 747 and most popular passenger jets, the A380 has no cargo-only equivalent. Why don’t the economics work for the A380 freighter?

Airfreight is measured in two ways: cube and weight. Cube refers to the volume of the freight. A plane is said to “cube out” when it’s fully filled up but doesn’t approach its weight capacity. The hypothetical freighter equivalent of the A380 would get too heavy as it approaches its volume limit.

The A380 is much better adapted as a passenger plane than as a cargo plane. To see why, it’s worth thinking about market conditions and looking through the history of the development of the aircraft.

In the 1990s, Airbus and other aircraft manufacturers identified two trends in air travel: Passenger traffic was growing significantly, and so was demand for more fuel-efficient planes. But not all the companies reached the same conclusion after they looked at these trends.

Boeing’s analysts thought that second-tier cities would rise in importance because there would be more room for growth in emerging cities rather than larger ones. It decided that second-tier cities should be connected by smaller, more nimble long-range aircraft. As a result, Boeing invested heavily in the 787 Dreamliner, a long-range, mid-size, twin-engine aircraft capable of unlocking smaller market routes. 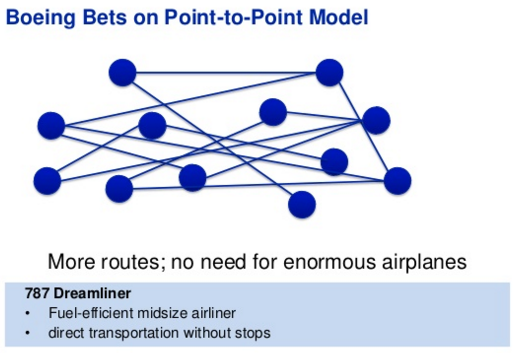 Airbus thought differently. It saw the growing congestion at major hubs and concluded that airlines would want planes that serve capacity-constrained major airports especially well. Landing slots are the scarce resource at busy airports; Airbus thought that airlines would want to pack as many passengers as they could on each flight to maximize revenue per landing slot. That’s how the A380 was born: The double-decker, wide-body, four-engine design can carry huge numbers of passengers. 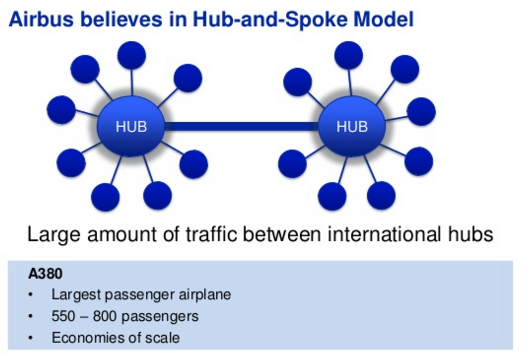 (Images via slides from Christian Busin)

Not well-designed for cargo

The A380 is so large that a freighter-equivalent would offer the largest payload capacity of any aircraft other than the An-225, which was used to carry Soviet spaceships. The A380’s emphasis on volume makes sense as a vehicle optimized for passengers, not cargo. That development is a natural consequence of Airbus’ hub-to-hub strategy.

There’s no denying that the jet has been a partial disappointment for Airbus. The A380 has had lower than expected sales. A 2014 New York Times report on the A380 puts the failure in strong terms. For one thing, it has no buyers in the U.S., South America, or Africa. In addition, it’s barely made a dent in Japan and China.

Airbus is at least partially missing out when it comes to air cargo. The number of passenger flights is set to double by 2034, with an implied growth rate of 3.8%. Meanwhile, the number of cargo flights is expected to grow even faster, at an average of 4.7% over the next 20 years.

Airlines usually prefer smaller-capacity aircraft on cargo routes. That’s because cargo is often produced and distributed from transport hubs far away from major cities, which is one way to reduce operational costs. It’s why UPS and FedEx respectively base their airline operations in Louisville, Kentucky, and Memphis, Tennessee. Large capacity aircraft like the A380 are more suited for major passenger hubs like New York, London, and Beijing.

Market conditions are even less favorable than when the plane first took off ten years ago. Given the slow-growing economy and cheap jet fuel prices, there’s been less demand for a high-capacity cargo plane. Flexport reached out to Airbus for comment on when there might be a freighter. “No plans for it yet, but never say never!” wrote back Mary-Anne Greczyn in an email response. The economics of the A380F might only work out if air cargo gets significantly less dense.

Still, not all is lost for the Airbus when it comes to cargo traffic. About half of all air freight travels on passenger planes; with space for 184 m3, the passenger configuration of the A380 still has significant capacity for cargo. (For reference, the Boeing 787-10 has space for 175 m3, and the 747-400 ER has space for 170 m3.) Even without the development of a freighter, the A380 will still be able to capture some of the growth of air cargo traffic.