Industrial action has affected logistics networks around the world in 2022. The U.S. rail network, which accounts for over a quarter of total U.S. freight haulage, came close to a widespread strike in mid-September 2022. While the strike was averted with a tentative agreement, mediated by the government, the damage on the highly-interconnected rail network had already begun.

Containerized freight dominates rail freight and most industries could have been affected. Though rail is heavily used for moving goods within the U.S., it is a key stage in international supply chains as well. Further, the possibilities for switching to other modes – ships, planes, and trucks – are limited without long-range planning.

After a protracted period of negotiations, ten of the 12 railroad work unions reached a new five-year pay and conditions agreement with the Class 1 rail operators. Yet, the largest two unions had not done so. They are numerous and critical enough to cause system-wide disruptions; they employ 66,000 out of 146,400 total rail workers.

A strike was averted at the last minute after the unions reached an agreement with employers that was mediated by the government. There are still risks, as the deal has to be approved by union members by September 29. That’s a similar outcome to rail strikes in 1982, 1986 and 1992, which were ended within a few days by Congressional action.

A range of industrial actions have afflicted logistics networks globally in 2022. That’s included strikes by South Korean truckers and port workers in the U.K. and Germany. Negotiations at the U.S. west coast ports are also ongoing, after the existing five-year contract lapsed this summer. In the case of U.S. rail workers, it was not just about pay. There are also long-term issues such as attendance, use of furloughs at times of low demand, and single-person crew models.

Despite the agreement, there will still be frictions for the rail network, which had already started closing from September 9 in anticipation of the action. Volumes of backlogs built up at rail ramps and mispositioned equipment need to be dealt with. 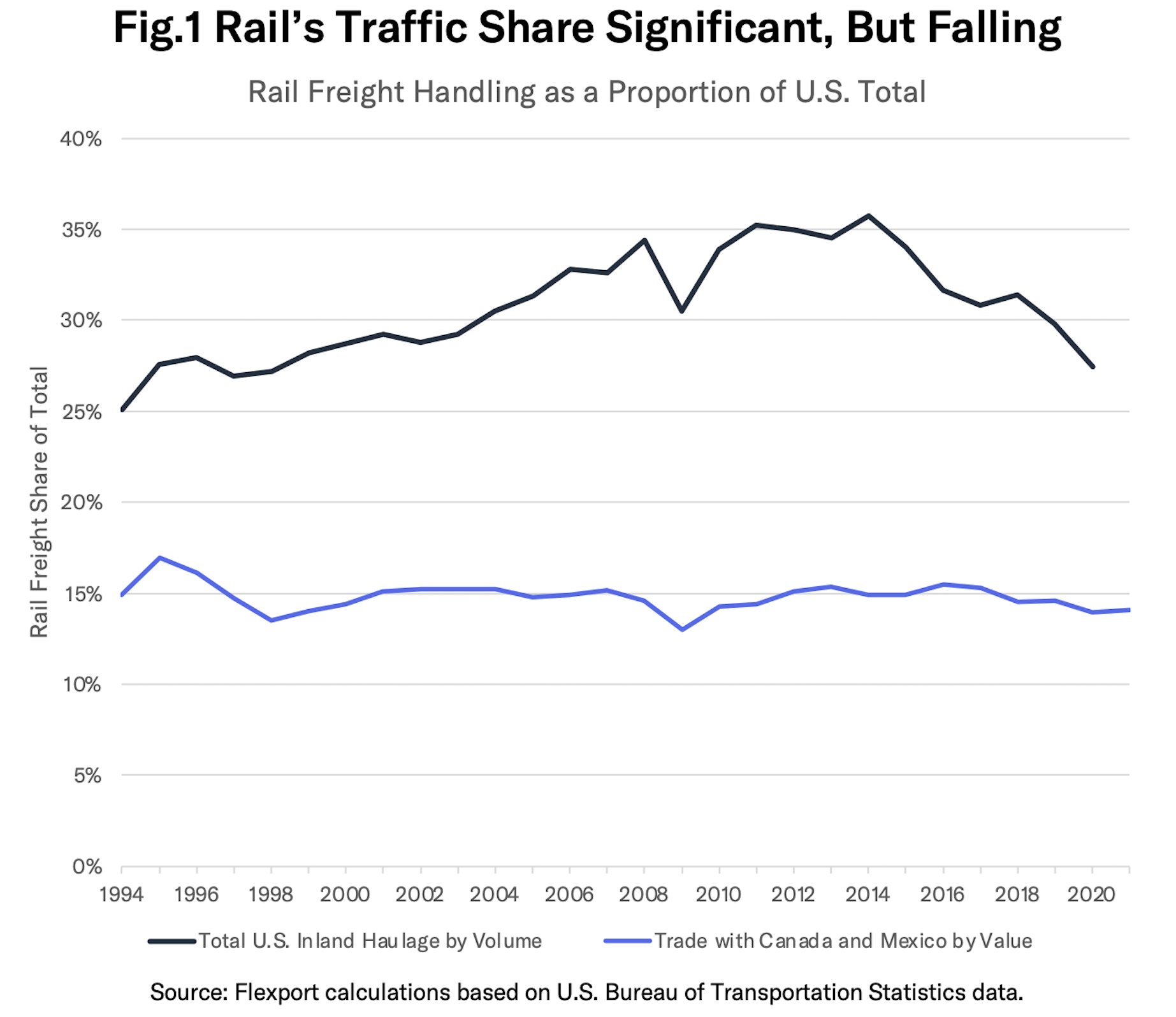 Rail freight also accounted for 14.1% of the value of trade between the U.S. with Canada and Mexico, including both imports and exports, in 2021.

Strains on Trucks and Trade - Impact on Supply Chains 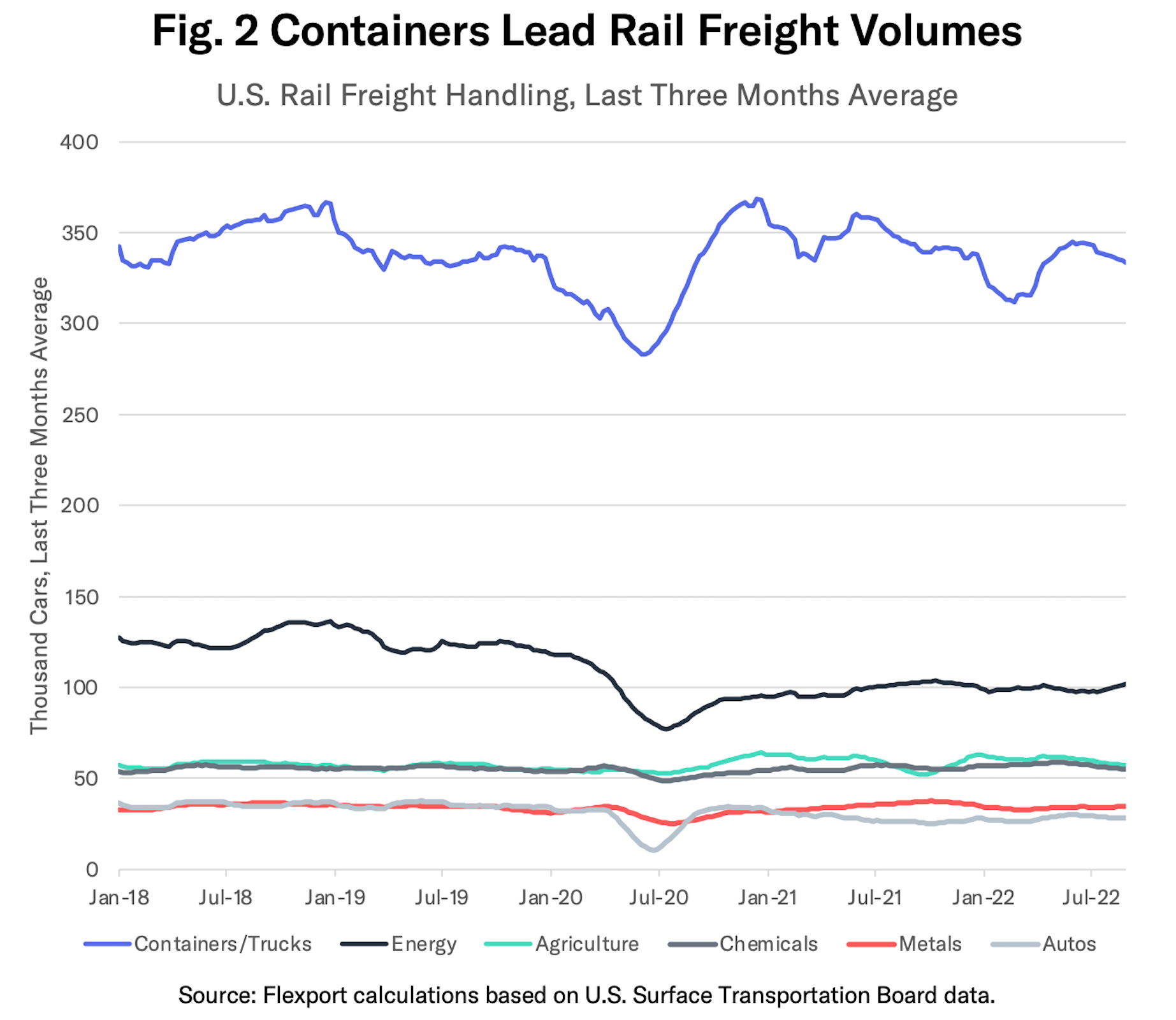 As shown in Figure 2, the carriage of containerized freight and intermodal truck trailers dominated activity on U.S. freight railroads, reaching 48.3% of total railcars in the 12 months to August 31, 2022. That means that virtually all forms of finished products with a low value-to-volume ratio are touched by the rail network.

Energy commodities (coal and petroleum products) accounted for 14.6% of rail activity. Agricultural commodities represented 8.7% and have timeliness challenges, given the perishable nature of the products.

Manufacturers may also use inbound logistics includling the delivery of supplies of chemicals (8.2%) and metals (5.0%), as well as the parts being delivered as containerized freight.

While the automotive industry only accounted for 4.0% of traffic, 75% of newly produced vehicles sold in the U.S. are carried by train at some stage in their supply chain.

For international trade, at a minimum, a U.S. rail strike could have delayed the final delivery of products that arrive at U.S. seaports. The strike threat came as the U.S. inbound ocean-rail interface was already being disrupted by congested rail ramps, which resulted in record high dwell times at west-coast ports in July.

Can anything be done to alleviate the impact of future rail strikes? In the near-term, the potential for bypassing the rail strikes via trucking appears limited. The AAR employers’ group estimates that an additional 467,000 truck moves per day would be needed to replace lost rail operations. It’s worth noting that the ATA has stated the trucking industry is already short of 80,000 drivers, compared to a base of 1.6 million truckers employed in August 2022.

A shift in ocean shipping to the U.S. east coast rather than the west coast—itself a response to earlier west coast port congestion—has also led to a realignment of rail network operations. A strike would need to last for an extended period for shippers to have time to pick alternative seaport deliveries to reduce reliance on rail, either by landing closer to destination or where more truck haulage is available.

In conclusion: A closely-avoided U.S. rail strike was averted only by government action, but already had an impact on logistics networks. Rail accounted for 27% of U.S. freight haulage in 2020 and 14% of trade with Canada and Mexico. Intermodal freight accounts for 48% of rail freight, so most industries will feel an impact in finished goods, components and materials. International trade is also exposed to issues affecting the domestic rail network.

Intermodal volumes account for nearly a half of rail freight, so a future strike could disrupt international trade activity, too.

While a strike was averted at the last minute, there are already network suspensions underway.

Rail's Getting Out of the Way in Southern California

Find Another Way - Rail Networks During the Ukraine Conflict

Rail’s Getting in the Way - Inland U.S. Congestion Issues