Let’s start with a chart. This week, it's US Labor Market Measures. 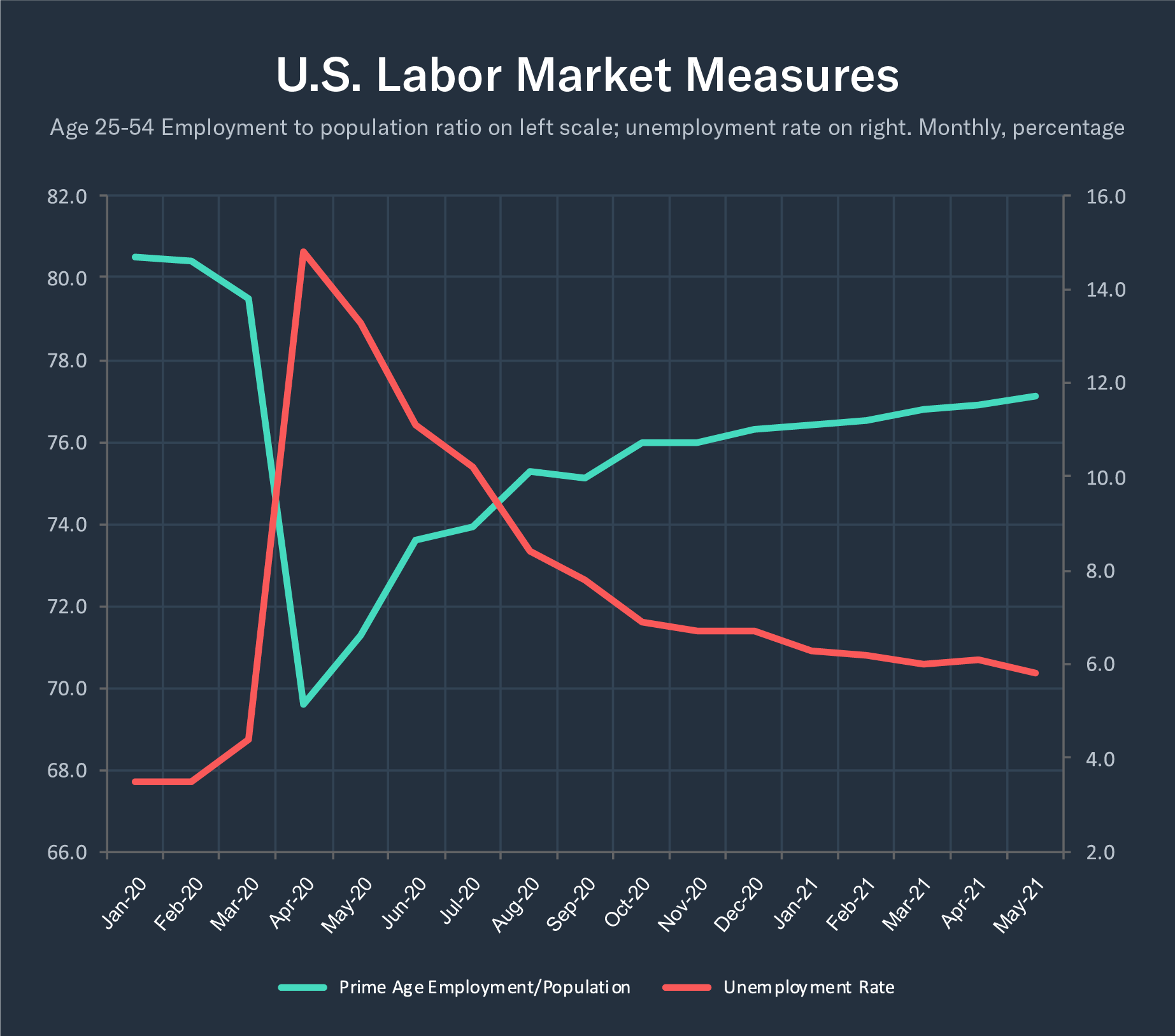 Other than a few kinks, these lines look like mirror images and tell consistent stories about what has happened to the US labor market through the Covid pandemic. The red line is the familiar unemployment rate, using the right-hand scale. The May rate was announced at 5.8%, down from 6.1% in April.

The other headline number was 559K jobs created. While the unemployment rate was better than the expected 5.9% number, the jobs created fell substantially short of the 671K expected.

So how do we explain the discrepancy? The two big numbers are coming from different surveys. The unemployment rate is from a household survey, and the jobs (nonfarm payrolls) come from an establishment survey.

The virtue of the employment to population ratio (green line, left-hand scale) is that it also accounts for workers who have stopped looking for employment, and thus do not count as unemployed. The green line shows the “prime age” (25-54) ratio, which increased to 77.1% in May, from 76.9% in April. This age limit controls for demographic effects, in which older workers retire.

The consistent story, then, is of a labor market that is strengthening, but not at the rapid rate of the middle of 2020.

While there is no guarantee of returning to those pre-Covid levels, the shortfall has been the motivation behind vigorous fiscal and monetary stimulus efforts.

Eurozone Inflation Up in May

The estimated Eurozone inflation rate for May was 2.0%, notable both because it was up from 1.6% in April and because it hit the European Central Bank’s target rate. The figure was heavily driven by surging energy prices.

For an even broader group of countries, one month earlier, the OECD measured inflation at 3.3% in April among its members, the highest rate since October 2008. Separately, a UN index of world food costs hit its highest level in almost a decade.

EU retail sales dropped in April, following a March increase. Retail trade was down 3.1% in the Eurozone and EU, but 5.5% in Germany and 6.0% in France.

Both exports and imports were up substantially year-over-year in May, but fell short of expectations. The lofty numbers—imports up 51.1%, exports up 27.9%—reflect a low base in 2020 and fell short of predictions.

The large countries agreed to seek a minimum 15% corporate tax rate. All that remains is to agree on controversial details, convince other countries, and persuade national legislatures.