An Interview With Marc Levinson, Author of “The Box”

The Box was first published in 2006 to enthusiastic praise, counting Bill Gates as one of its fans. We spoke with author Marc Levinson, to chat about the book for the occasion of its 10-year anniversary.

The book details the rise of the shipping container, which are boxes made of aluminum or steel, typically 20 or 40 feet long. You can see them on the backs of trucks and trains, and if you’re by a major port, you might spot as many as 10,000 of these boxes stacked on massive ships. Millions of them are traversing roads, tracks, and seas at any given time.

As you might expect, _The Box _is one of Flexport’s favorite books. Instead of talking about globalization in broad and abstract terms, it details an innovation that logistically made possible globalization as we know it. In addition to talking with Marc about ocean freight, we learned that the second edition of The Box will be released on April 5th, 2016. A lightly-edited rundown of our conversation follows.

Dan Wang: The concept of containerization originated with a North Carolina trucker named Malcom McLean. There’s a misconception about how exactly he thought of the idea. Can you clear up what actually happened?

Marc Levinson: Well, the misconception probably originates from McLean himself. He liked to tell the story that he came up with the idea of containerization once when he spent too much time queuing to unload a truck. That was 1937, and he was supposed to have realized that, instead of unloading, you can save time if you hoist the entire truck onto a ship.

It’s a fantastic origin story, and it’s a tale that people love. The thing is, McLean started to tell it when he was quite advanced in age, and there’s no evidence that it’s true. The idea of the container has been around since the 1700s, so it can’t quite have originated with him. And it wasn’t until 1953 that he mounted boxes on ships. So in order to believe the story, you have to accept that he had this major insight on improving efficiency, and yet didn’t act on it for over 15 years.

That makes it all a bit of a hagiography. He didn’t exactly come up with the idea of the container.

So what would be a better way of describing McLean’s innovation?

He took an idea that was hundreds of years old, was almost universally judged to be uneconomic, and made it so that it can be generally applied. There wasn’t a single main thing he did that allowed for the growth of containerization. McLean was a guy trying to make a profit. I get a kick out of reading reports that he was trying to change the world when mostly he was trying to make a buck. He took a series of steps that pushed the industry along, eventually to places that he himself never dreamed of.

Possibly the most important development for containerization was the process of standardization. And that was not a deliberation that Malcom McLean was directly part of. Now, other shipping lines did use his patented method for lifting containers, and that’s made it possible for a box to be picked up at any major port. He played a significant role by allowing free use of the patents. This permitted standardization, so the industry could grow quickly. But McLean himself didn’t participate in the negotiating process that led to a standard container.

I think we can make a point about innovation more generally here. We too often have this idea that an apple hits you on the head, and suddenly you have a great insight that dramatically changes the world. That’s usually not how it works. McLean didn’t have a single great idea on how containers would affect trade with Asia and the rest of the world. Instead, these were more incremental changes, driven by a desire to make some money. 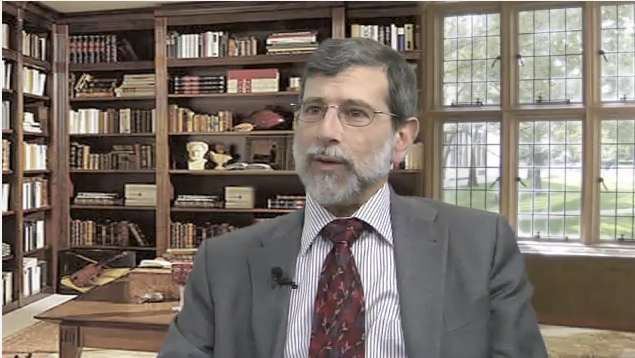 (Marc Levinson, author of The Box. Picture via Rishikesha Krishnan.)

Let’s move on to modern ocean carriers. What are a few current trends that excite you?

One interesting development is the rise of slow steaming. Ships are moving more and more slowly to save fuel and cut costs. Interestingly, I haven’t seen many companies demand faster ocean service. Everyone’s moving more slowly, but you might think that there would be a market for faster steaming, to cut two or three days off the journey across the Pacific; few carriers have stepped in to offer that.

I’m also interested to see if there’s a market for direct port-to-port shipping, as opposed to shipping through a hub. It can provide direct routings to ports that are currently railroad-rational. There’s an analogy to the air world here. If you were flying from San Francisco to Chengdu, then you might have to fly in a smaller plane to L.A., then a bigger plane to Hong Kong, and then a smaller plane again to Chengdu. Now you can just stay on a smaller plane and go directly to Chengdu. I wonder if something similar will happen to the world of shipping.

Container ships are really large, and getting larger. Engineers are consistently exceeding the theoretical size limits. The current limit is about 20,000 TEUs (20-foot equivalent units). How large do you expect they’ll ultimately be?

I think that they can certainly be larger. But past a certain point, I don’t think that physical constraints really matter. Instead, the constraints are more economic. Asia-to-Europe ships can get quite a bit larger because the ports can handle it, but American ports can’t handle these giants. Additionally, the Panama Canal will be a constraint even after it’s been widened.

There are only cost advantages to sailing larger ships if they’re crossing the ocean mostly full. I’m not sure how easily you could fill up these massive ships. And of course if they’re not full, then they’re more expensive to run than normal ships filled to capacity. The very large ships also cause confusion and inefficiency in the ports by discharging and taking on so many containers each time they call, and shippers will end up paying the cost of that inefficiency one way or another.

Can you name any other technological developments that are as important and as relatively unknown as the container box?

When you talk about innovations, there’s a lot of historical evidence that things are delayed. For example, everyone knows that Thomas Edison invented the lightbulb in the 1870s. But it wasn’t until the 1920s that the majority of American factories were electrified. For a variety of reasons, it took 50 years for the technology to penetrate. So it’s quite plausible that we have things going on now, things that we don’t even notice, that will change things in a big way. There’s a lot going on with computers and the Internet that we haven’t begun to absorb.

When Malcom McLean started to containerize, his ideas weren’t legal, strictly speaking. Are there some other laws on the books now that are preventing big innovations in supply chain from taking effect?

Domestic shipping in the United States is certainly still heavily regulated. The Jones Act makes sure that ships traveling between domestic ports have to be American-crewed, constructed in America, and owned by Americans. That significantly raises costs if you want to ship by water between American ports.

If you unload a megaship at Rotterdam, you can can transport goods to Antwerp, staying on the water the whole way. In America, you have to switch to truck or rail. That makes it harder to take the contents of a megaship from Los Angeles and then use a barge up the coast to Seattle, or unload at New York and barge up to Boston. We don’t really have much of a system for transporting goods between cities by sea.

Do you think that we’re mostly through with the effects of containerization, or have we yet to see through the changes that Malcom McLean wrought?

I think that what we’re seeing now is a change in trade patterns, not only geographically, but in what’s actually being traded. For example, trade by weight has certainly declined, and that’s best seen by comparing your television set today to the television sets 20 years ago. And in addition, there’s a lot of trade now in non-physical goods, like the exports of movies around the world, and so perhaps there’s less emphasis on the the importance of containers.

There are some other interesting supply chain developments worth noting. For a long while, companies didn’t take risk into full account. When multinational companies really started to go global, they were mostly concerned with cutting the costs of production and transportation. But we’ve had a number of really serious incidents in which trade was disrupted. And so people are now starting to pay attention to risk. They’ve built shorter supply chains, redundant supply chains, and sometimes even eliminated certain supply chains.

Who knows if there might be a disruption to trade on the East or West coasts. Your company can be affected by a mechanical problem, bad weather, a labor dispute, or something else. All the risks have raised costs, but that’s because they weren’t properly taken into account in the first place.

Ocean freight rates have fallen to a historic low, so it’s a really bad time for ocean carriers. How do the dynamics of the industry play out?

We can consider what happened to another sector of the American economy. Big box stores like Walmart and Target are huge, and people were asking: “Why are they adding so much floorspace? Who needs so many stores?”

As it turns out, they didn’t need all that floorspace or number of stores. Instead, these big-scale players were trying to muscle out the high-cost players. Companies with lower cost curves were crowding the higher cost companies out of the market. I think this is what’s happening in the shipping industry now. There’s been too much excess capacity, and that’s going to drive out the carriers that can’t compete.

There may be a role for more niche players, like a carrier that offers faster steaming across the Pacific. And the Jones Act carriers will probably continue to do quite well.

The second edition of The Box is available for pre-order now.