Ocean and air freight rates and trends; customs and trade industry news plus Covid-19 impacts for the week of June 14, 2022. 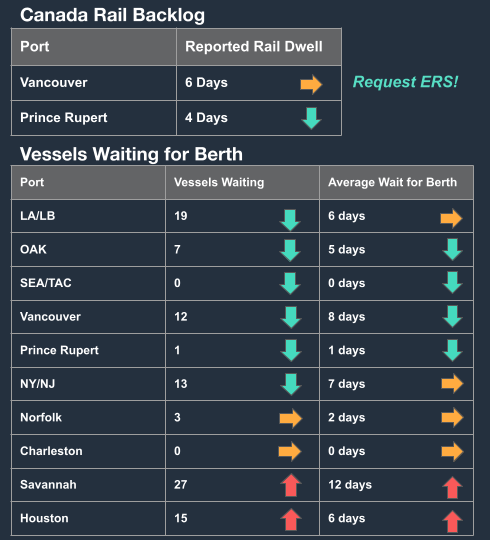 Congress Sends Ocean Shipping Reform Act to President Biden’s Desk On June 14, the House of Representatives passed the Ocean Shipping Reform Act by a vote of 369-42. This bill aims to clear out supply chain bottlenecks, punish carriers for unfair practices, and generally address the ocean freight import and export process in the United States. President Biden is expected to sign the bill soon.

Spot Rates from Asia to N. Europe Set to Spike The Loadstar reports that despite a softening in demand, container spot rates from Asia to North Europe are likely to spike in coming weeks. This is caused by chronic yard congestion being experienced at North European hub ports. That congestion is being exacerbated by potential strikes by dock workers in the region.

Ocean Shipping Reform Act Passed By Congress SupplyChainDive reports that the Ocean Shipping Reform Act has officially passed through the Congress, and will be sent to President Biden to sign the bill into law. The bill would broaden the scope of the Federal Maritime Commission’s (FMC) powers to promote U.S. exports and encourage reciprocal trade. This act represents the largest overhaul of shipping regulations since 1998.

Weekly Economic Report: Stop Being So Negative The European Central Bank (ECB) has arrived late to the monetary policy tightening party but is more hawkish than expected. The structure of its actions—alongside those of the Fed—could have significant disruptive implications for financial market functioning as well as for consumers’ wallets.

Air Timeliness Indicator The Air Timeliness Indicator measures the amount of time taken to move airfreight along two major trade lanes from the point of consolidation to arrival at final destination. The latest indicator saw the TPEB rise slightly to 11.3 days for the four weeks leading to June 12, while the FEWB fell to 9.9 days. Both levels were last seen in early April and may reflect seasonal shifts working their way out of the system as importers switch to summer goods.

Ocean Timeliness Indicator The Ocean Timeliness Indicator similarly measures transit time for ocean freight along the same two trade lanes. In the past week, the TPEB and FEWB each decreased to 99 days, hitting levels last seen in fall of 2021. Continued improvements in cargo ready to departure times may still be moving through the system as Asian ports debottleneck. The indicator may also be showing that the worst of late 2021 congestion may be passed, but the metric remains well above pre pandemic levels.

Logistics Pressure Matrix Flexport’s Logistics Pressure Matrix (LPM) gathers 10 data points in an attempt to provide a picture of the challenges facing logistics networks from the demand side and a view of ongoing activity on US-inbound routes. In the latest update, consumer expectations fell dramatically to the lowest level in over ten years. A new measure of warehouse pricing indicates that the price of storing inventory remains high along with shipping. Origin ocean handling times continue to improve while air transit times remain near previous levels.