Clothing supply chains face pressures from logistics congestion and high commodity prices; to supplier closures and tariffs. Are there signs of onshoring or reshoring in response to the interruptions or earlier U.S. tariffs? Have apparel manufacturers and retailers changed their inventory or sourcing practices? This is the second report in a two-part series looking at the state of apparel supply chains in the wake of the pandemic.

In the first section of our two-part report on the state of apparel supply chains we identified a wide-range of challenges faced by the industry in the wake of the pandemic including logistics congestion, elevated commodity prices, factory closures and a potential downturn in retail sales. This report looks at both tactical and strategic options for tackling those challenges.

As a seasonal industry, apparel suppliers depend critically on receiving goods in a timely manner. An uncertain sales outlook combined with pandemic- and logistics-linked issues have led many firms to make tactical changes in their sourcing strategies. 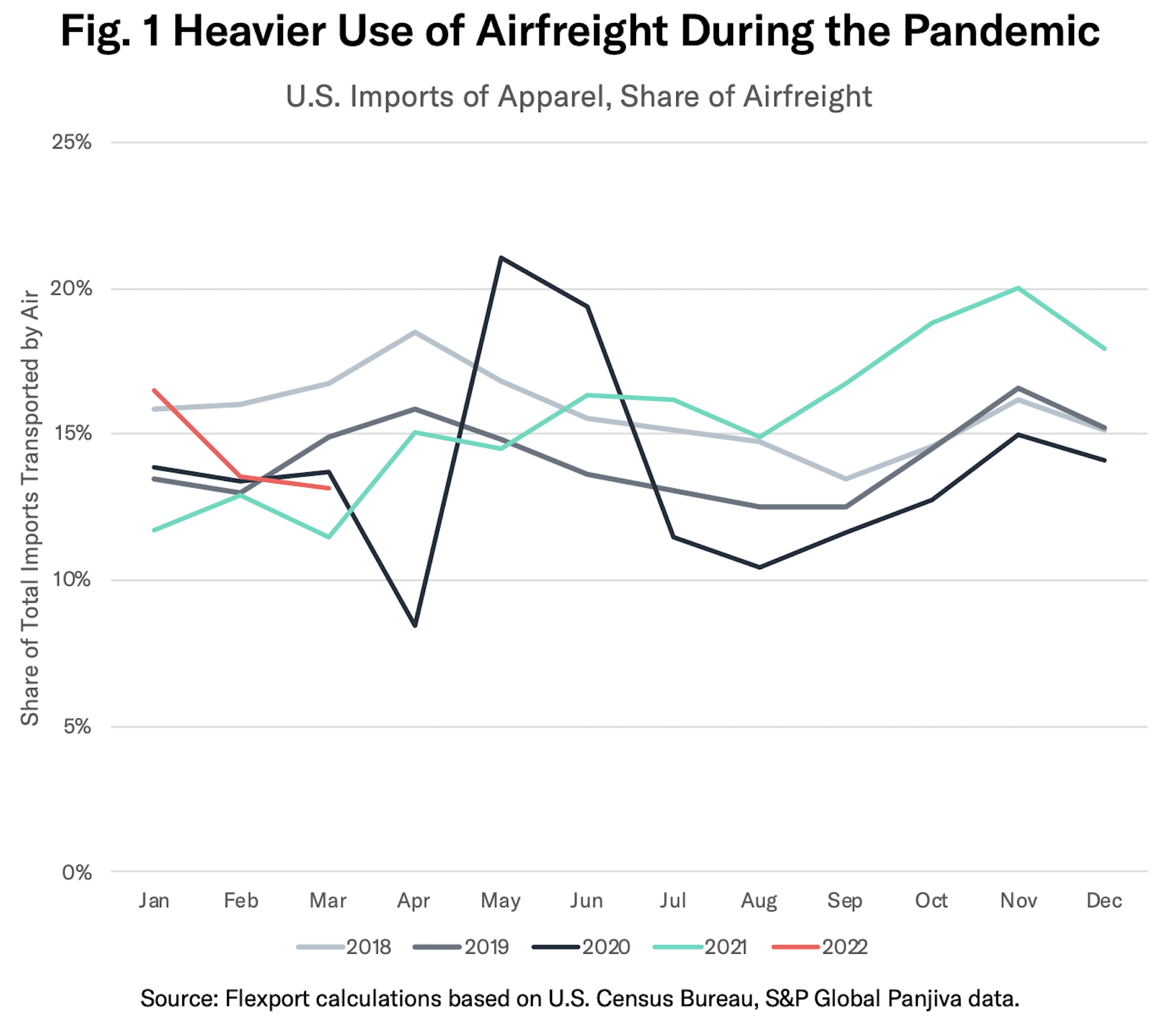 As shown in Figure 1 above, the proportion of U.S. imports of finished apparel (HS 61, 62) traveling by air freight—aiming to bypass slower ocean freight—surged in Spring 2020 as retailers sought to catch up with delayed supplies.

Apparel retailers have also had to address their inventory levels. Too little can result in lost sales while too much can require discounting or disposals later. 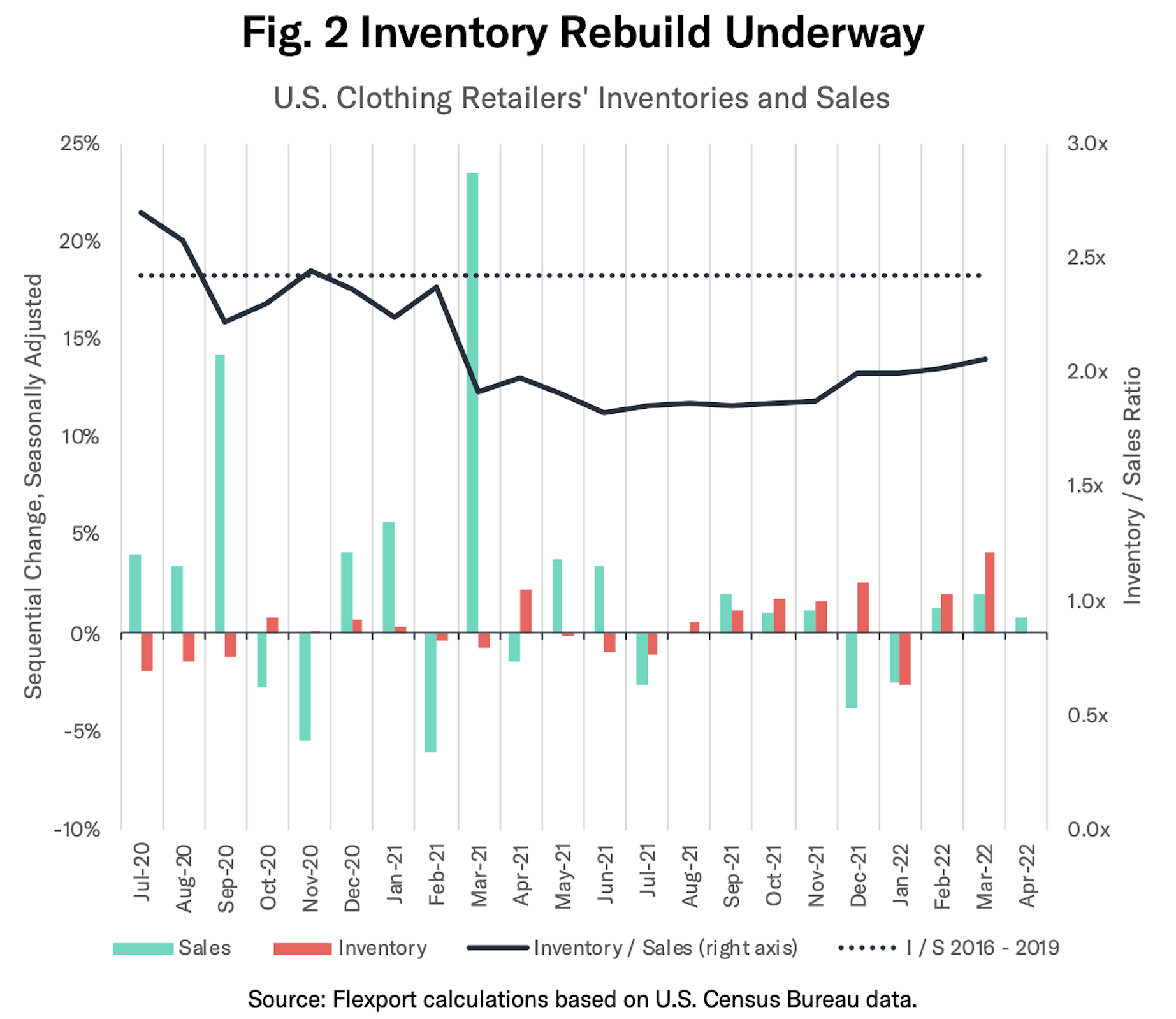 Before the pandemic, in the 2016 to 2019 period, the U.S. clothing and accessories retailers averaged an inventory-to-sales ratio of 2.42x. Following a period of disruptions while store closures took place in varying degrees between March 2020 and April 2021, that dropped to a trough of 1.82x in June 2021, as shown in Figure 2.

Subsequently there has been a steady rebuilding of inventories which have outpaced sales growth in all but one month since October 2021 with the result that the ratio increased back to 2.05x as of March 2022. 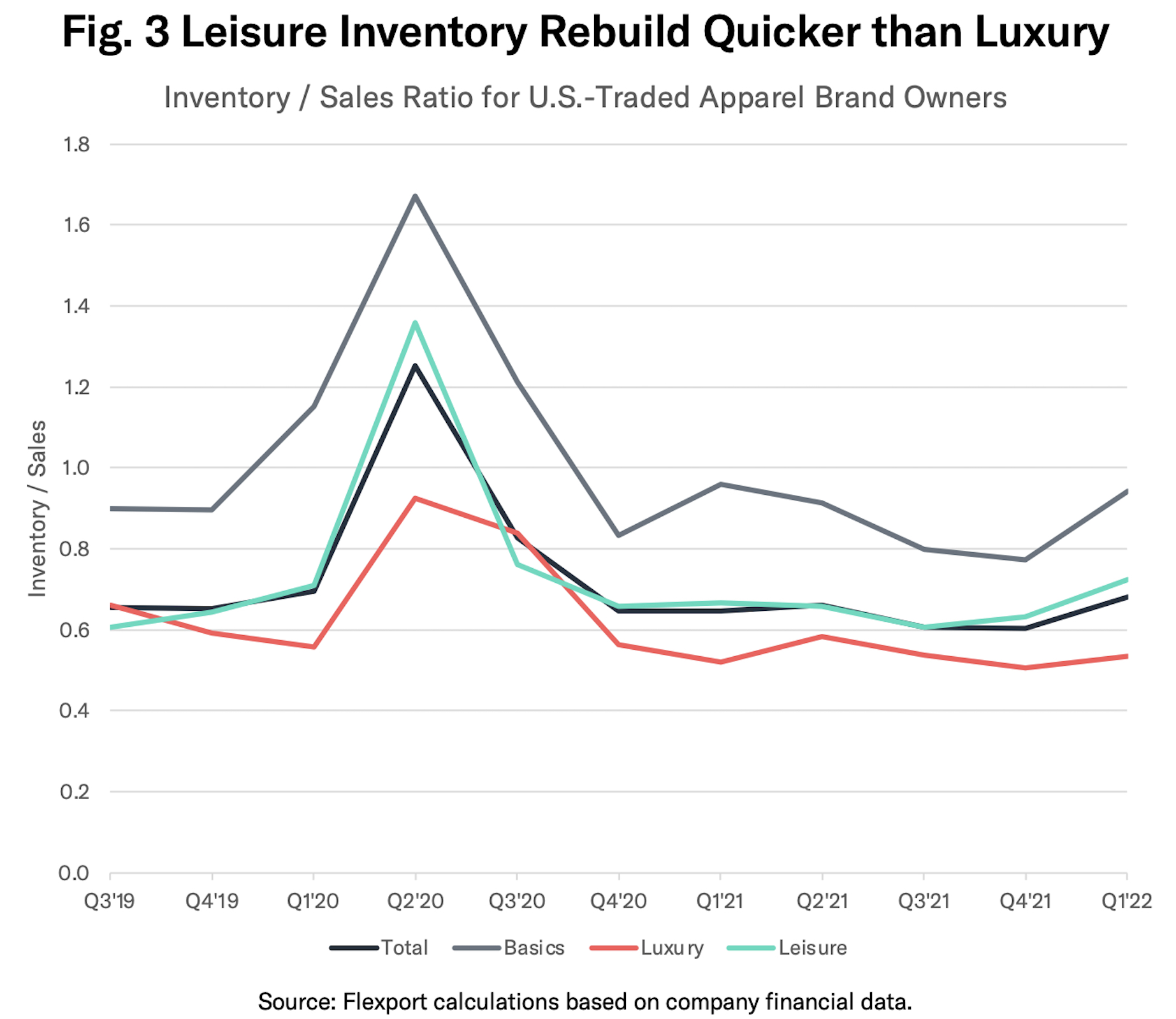 Not all corporations are following the same strategy, however. Figure 3 shows the inventory-to-sales ratio for 18 U.S.-quoted apparel brand owners split into three groups.

Within the three groups, though, basic apparel (e.g. jeans and underwear) specialists had a small reduction in the inventory-to-sales ratio while leisure and luxury brand owners improved. Leisure clothing firms, including sportswear, increased to 0.72x from 0.67x a year earlier while luxury firms rose to 0.58x from 0.55x. That may suggest a more rapid inventory rebuild and/or optimism about continued revenue growth.

Apparel retailers may choose to make some of their tactical sourcing decisions more permanent. Doing so also needs to take into account longer-term factors such as shareholder returns, risk mitigation, environmental responsibility and managing exogenous factors such as politics.

Taking the U.S. as an example, the impact of tariffs on imports from China applied during the Trump administration is still being felt today. As outlined in recent Flexport research the Biden administration may be considering adapting some of these tariffs to offset rising inflation. Clothing was covered by “List 4A” created after the Section 301 investigation at a customers duty rate of 7.5%. 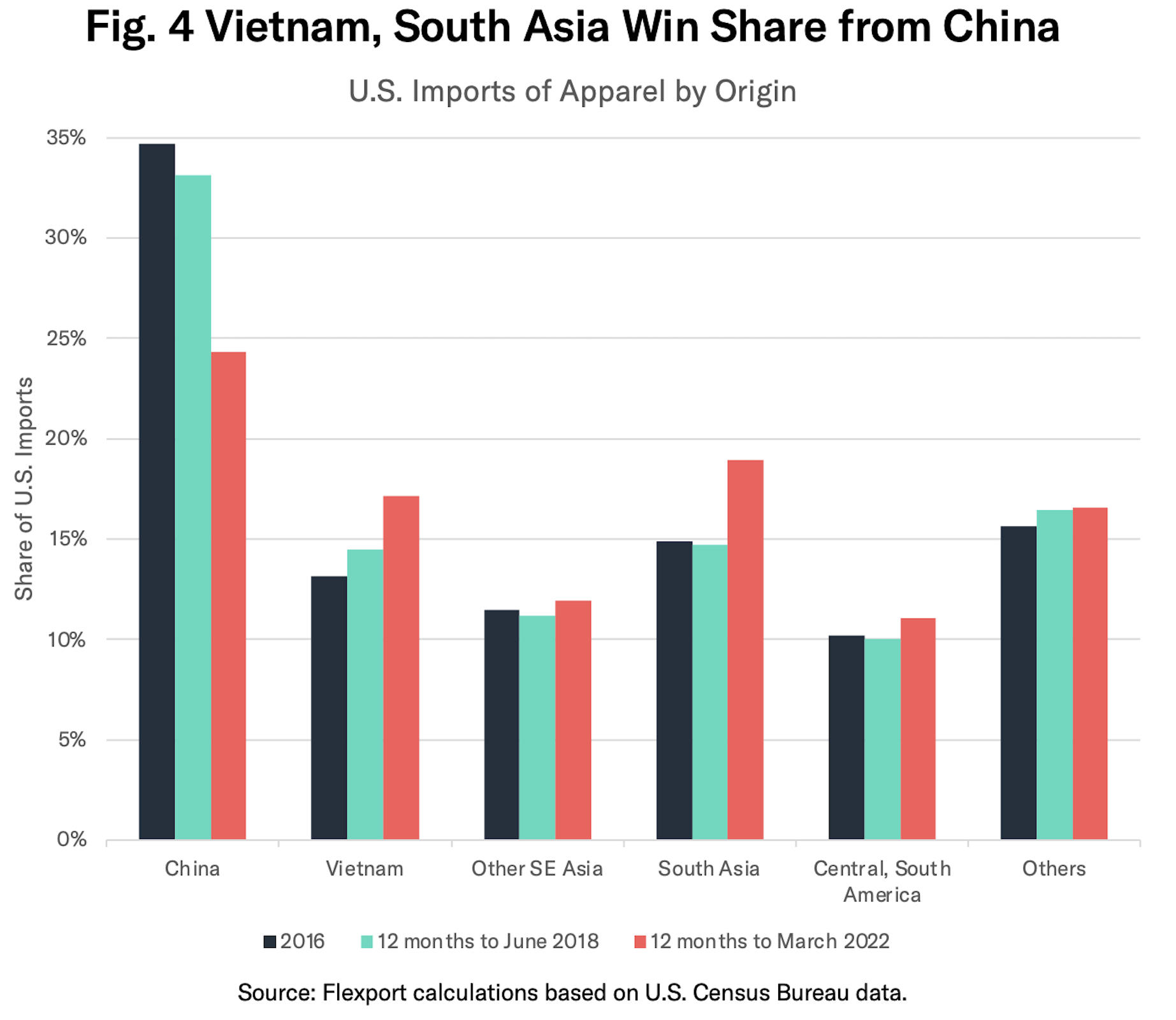 The biggest winners as importers have switched suppliers have been Vietnamese manufacturers—despite the challenges flagged above—with a 17.1% share of imports in the past 12 months versus 13.2% in 2016. Exporters from South Asia have also been major beneficiaries, particularly those in Bangladesh, with an 18.9% share from 14.9%.

In conclusion: Apparel supply chains have faced a panoply of challenges in the past three years including pandemic-related sourcing interruptions, logistics congestion and elevated commodity prices. They now face risks from declining sales. Options for dealing with these challenges include the mix of transportation modes, inventory management and reshoring of sourcing.