As of July the Section 301 duties on imports to the U.S. from China will have been in place for four years and will be due for review. Whatever happened to the U.S.-China trade war? Did the tariffs deliver what was expected? What might happen next under the Biden administration?

The Trump administration applied a series of tariffs on imports from China from July 2018 onwards. The tariffs were applied in four waves in response to a Section 301 review of the Chinese government’s intellectual property practices as part of the wider trade war between the two countries.

From a legal perspective the first two tranches of tariffs are scheduled to expire after four years on July 6, 2022 and August 23, 2022 respectively, under the 1974 Trade Act. There’s also a requirement for a statutory review of the tariffs by the U.S. Trade Representative. The tariffs have also been challenged at the World Trade Organization and U.S. Court of International Trade.

When combined with other statements from the Biden administration there’s the possibility that some or all of the tariffs may be rolled back.

What are the “Section 301 tariffs” and how are they different from other trade instruments?

The U.S. Trade Representative launched a review of China’s intellectual property and technology transfer policies at the behest of President Trump in August 2017. The review was carried out under Section 301 of the 1974 Trade Act and delivered recommendations in March 2018. 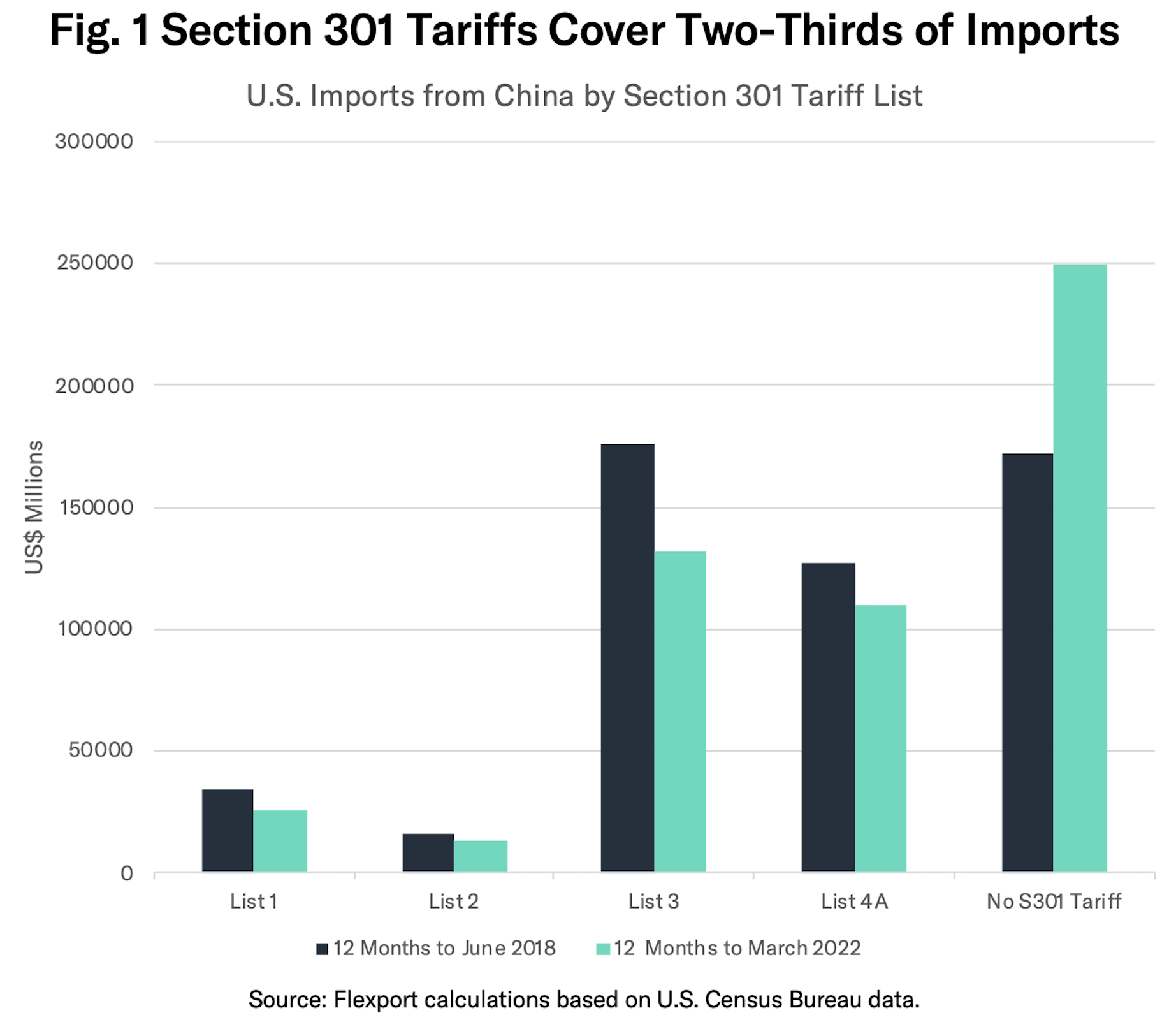 Following the report, the Trump administration decided to implement import duties of 25% on 1,333 items worth around $50 billion for implementation in July and August 2018 (List 1 and List 2) covering industrial supply chains and components.

The Chinese government responded with retaliatory duties on a similar value of U.S. imports which in turn kicked off a series of tit-for-tat tariff increases which covered a widening range of duties. In September 2018, the Trump administration applied 10% duties to around $180 billion of imports (List 3) which were subsequently increased to 25% in January 2019.

Following a round of abortive negotiations, the U.S. government decided in August 2019 to apply tariffs to a further $130 billion of imports of mostly consumer goods (List 4A) at a 15% rate.

The U.S. government also provided a procedure for requesting hardship-related exclusions from the tariffs. The process received over 50,000 applications of which around one-third were accepted for List 1 and List 2 tariffs and only around 5% for List 3 and List 4A. All had expired by December 2020. More recently the exclusions from tariffs for 549 products were extended through Dec. 31, 2022.

In October 2019, the U.S. and China announced a framework Trade & Economic Agreement (TEA, or “Phase 1 Trade Deal”) which was finalized in December and implemented in early 2020. The deal includes a reduction in List 4A duties to 7.5% and a series of commitments from China to purchase U.S. exports.

Finally, the Section 301 duties have been subject to legal challenges. Most recently the Court of International Trade ruled that the application of List 3 and 4A tariffs are allowed. Yet, the CIT also noted that the Lists were not fully justified due to a technicality in the consultation process in 2018 and 2019 and so a review is required.

The U.S. International Trade Commission has launched an investigation of the economic impact of the tariffs at the direction of Congress under the Omnibus Appropriations Act in March 2022. A public hearing scheduled for July 21, 2022 may draw attention to the topic.

Have the tariffs worked?

A judgment of the effectiveness of the Section 301 tariffs can cover three areas: policy change in China; a reduction in U.S. imports of the products covered from China; and reshoring of manufacturing activity.

Policy change judgements can be left for another day. From an import perspective though there has certainly been a reduction. 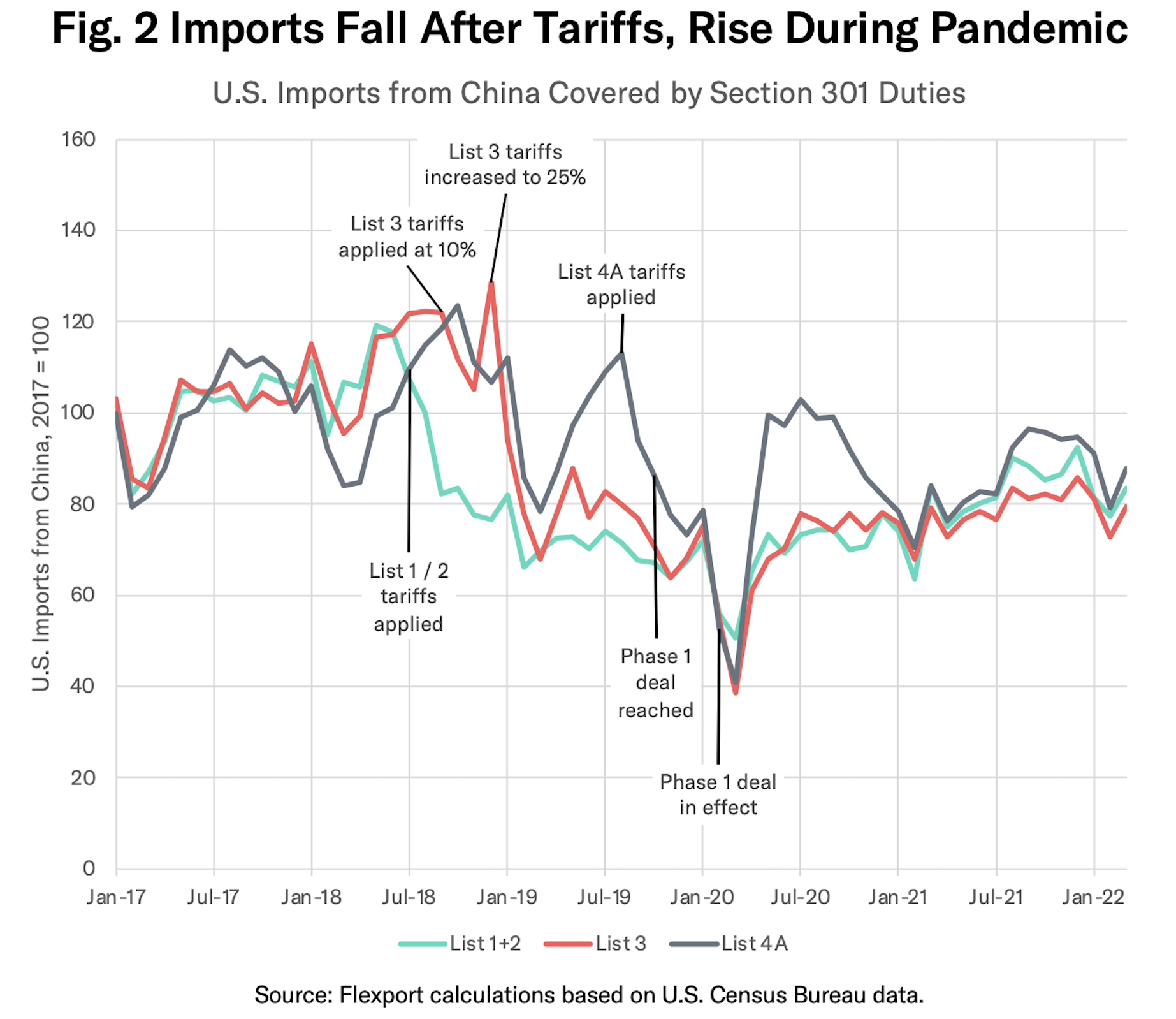 Broadly speaking, there have been three periods of evolution for each: a run-up ahead of tariff imposition/implementation as importers seek to beat higher costs; a downturn immediately after as higher costs reduce competitiveness of the imports; and a recovery during the pandemic as elevated consumer demand draws in more imports, particularly of List 4A products. 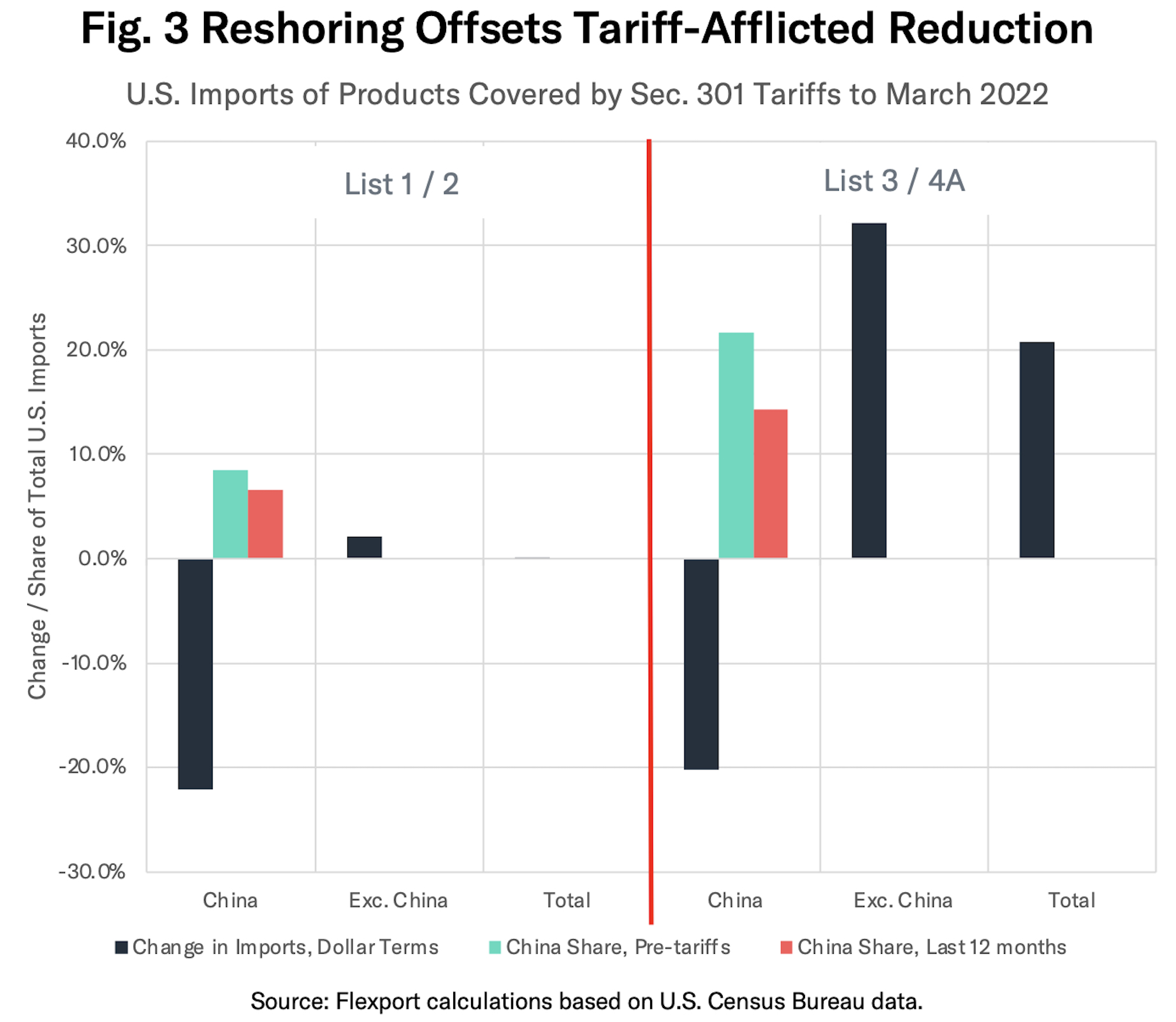 Onshoring is a process that can take several years, though this move of sourcing away from China can happen more swiftly where alternative supplies are readily available in other countries, also known as reshoring. As shown in Figure 3 the reduced imports from China have been offset by increased imports from elsewhere.

In the case of List 1 and 2 products, focused mostly on industrial supplies, imports from China fell by 22.1% in the past 12 months versus the pre-tariff period (12 months to June 30, 2018). Imports from other countries meanwhile rose by 2.1%.

Notably Chinese supplies only accounted for 8.4% of the total U.S. imports of those products pre-tariffs, reflecting a policy aim of making their replacement with alternatives easier.

Where does the Biden administration stand on tariffs and what happens next?

President Biden had struck a skeptical tone regarding the tariffs during the presidential campaign in 2020. Yet, thus far the Biden administration has chosen to leave the tariff package in place.

If the ITC report was the only review mechanism then progress would be slow - its results are only due by March 15, 2023.

However, the tariffs exist at executive discretion, potentially allowing the President to remove them in whole, in part, or in an adaptive manner whenever he likes. In that regard, there may be movement sooner as part of the Biden administration’s attempts to manage elevated consumer price inflation.

President Biden has stated, with regards to the cutting Section 301 tariffs to manage inflation, “we’re discussing that right now” with the White House flagging the review will identify “where it would be most advantageous to take steps that would help.” 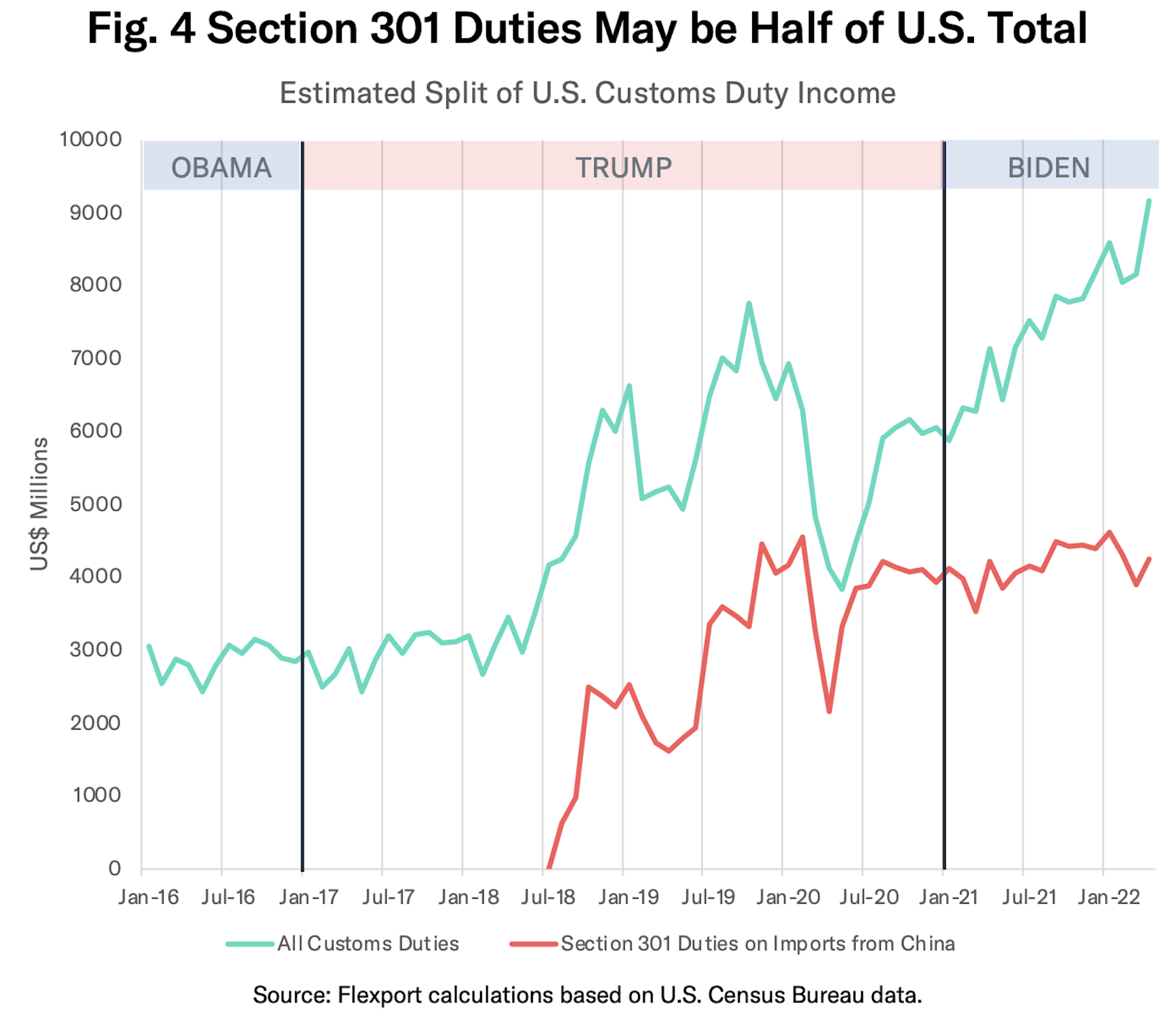 That follows the Biden administration’s budget program released at the end of March 2022 which included an assumption of declining income from customs duties, with a drop to $54 billion in the 12 months to Sept. 30, 2023 from $93 billion in the current fiscal year.

Tariffs are not usually seen as a source of inflation. They tend to have a “one-off” effect rather than persistent upward pressure on prices. However, the Biden administration has argued that much of the inflation we are currently experiencing is due to one-off effects, such as a surge in used car prices. Thus, a one-off cure could potentially be relevant in these circumstances.

The U.S. Trade Representative, Ambassador Katherine Tai, has meanwhile noted that “all tools are on the table” in dealing with inflation. The USTR will have to factor in the backdrop of the ongoing trade relations with China, including the Phase 1 Trade Deal and geopolitical relations more broadly.