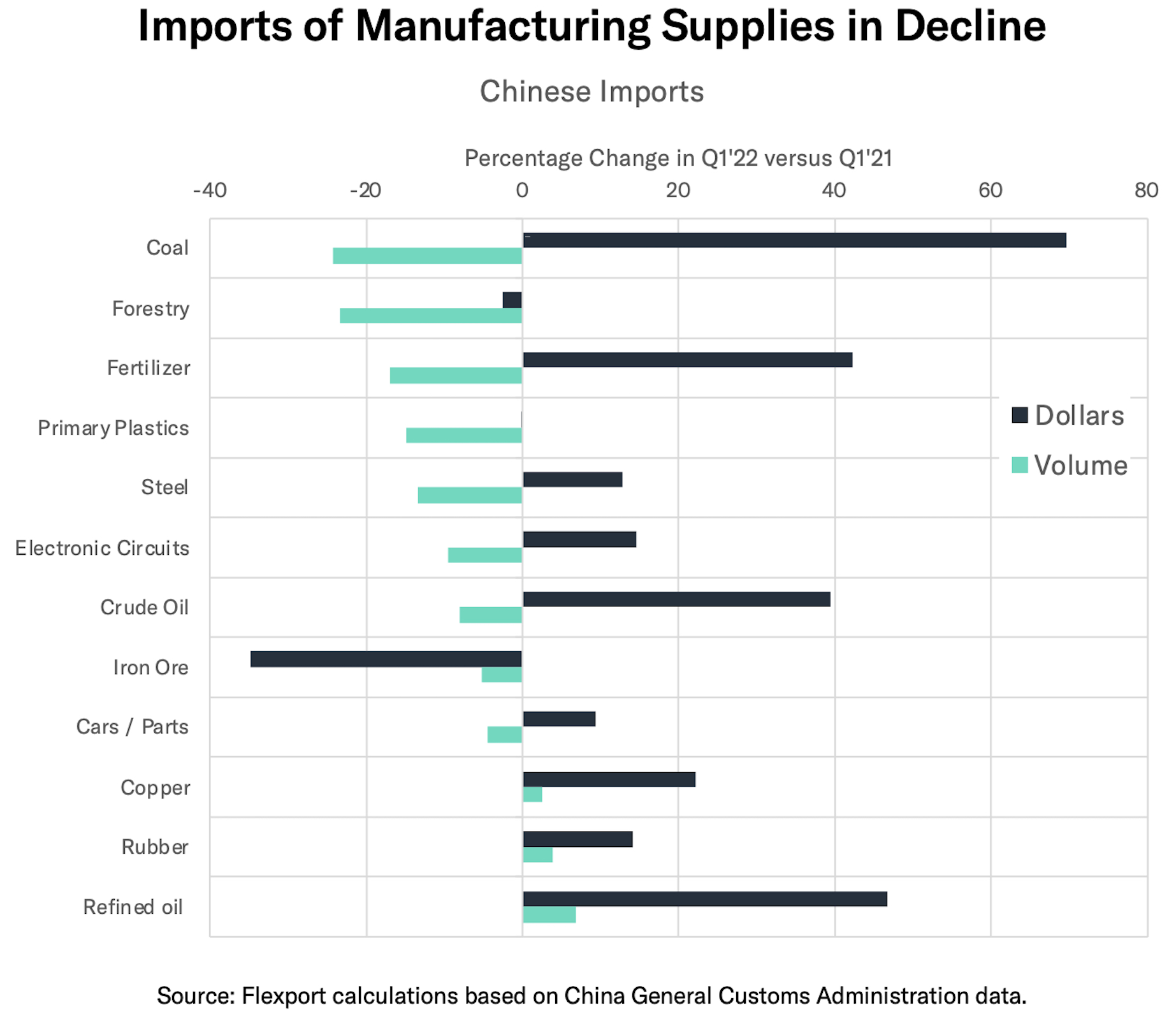 China’s manufacturing economy was one of the fastest to recover in the wake of the initial round of the pandemic in 2020 and its exports have soared in the wake of the consumer spending boom of the past two years. China’s economy has led the world’s major economies in rate of growth.

Yet, the Chinese economy is now having to deal with another wave of the pandemic, with lockdowns in Shenzhen and Shanghai during March and April. How much of an impact have the new lockdowns had on international trade?

China’s international merchandise trade increased by 7.5% year-over-year in March. That may sound like a relatively brisk pace of expansion, but one needs to compare both with Chinese norms and with substantial inflation. The March figure was the slowest rate on that basis since November 2020.

As part of the March performance, Chinese imports fell by 0.1% in dollar terms, well below the 8.4% expansion expected by economists. The closures in Shenzhen are reflected in the figures while the more recent lockdown in Shanghai will only impact future data. There are signs, however, that there’s a slowdown underway even before the full impact of the lockdowns is factored in.

The chart looks at quarter-over-quarter growth for the first part of the year and distinguishes between the value of import changes and the volume (deflated). As inflation mounts, the difference is increasingly important.

In volume terms in Q1’22, there was a year-over-year decline in imports of oil (down 8%), steel (13% lower), plastics (which dropped by 14.9%) and electronic circuits (off by 9.6%). Each of these categories serves as an important input into further production. The falling volumes foretell a widespread slowdown of manufacturing activity across the board.

That warning from import volumes is consistent with official policy pronouncements. The Chinese Premier has warned three times in the past week that the country’s economic growth could be disrupted by the renewed COVID-19 outbreaks and that the country will take economic policy action as required. That appears to include a newly agreed cut to banks’ reserve requirement ratios, a form of monetary stimulus.

The monetary move is particularly striking as it runs counter to recent moves to fight inflation by tightening monetary policy in the United States and Europe. One explanation of the divergence would be that an anticipated slowdown is seen as sufficient for countering inflationary pressures in China.

In other research we released updates to our Post-Covid Indicator and Trade Activity Forecast - both indicate continued elevated levels of activity in the next few months. We also took a deep dive into what’s been driving trucking rates higher (spoiler: it’s fuel costs).

U.S. retail sales increased by 7.0% year over year in March, the slowest rate since February 2021 and less than the 8.6% rate of CPI for the same month.

U.S. consumer price inflation of 8.6% year over year in March was outstripped by producer prices which surged 11.2% higher. Both are experiencing the pull of previous energy price increases linked to the conflict in Ukraine and resulting sanctions on Russia.

U.K. inflation hit 7.0% for the year to March. This exceeded forecasts and was the highest rate in 30 years.

It’s been downgrade week for the major multilaterals. The World Trade Organization has cut its forecast for global merchandise trade growth in 2022 to 3.0% from 4.7% respectively with a recovery to 3.4%. The WTO warned the figures may be “subject to revision due to uncertainty” about the conflict in Ukraine.

U.S. manufacturing capacity utilization rose in March to 78.7%, up from a month before, a year before, and a 50-year average.

In contrast with the more rapid tightening of its U.S. counterpart, the European Central Bank held steady on its policy rate and announced that it would end its bond buying in Q3. In response, the euro fell to a near-five-year low against the dollar. Other things being equal, looser monetary policy tends to weaken currencies.

The U.K. has committed to fully liberalizing trade with Ukraine for 12 months. Full details are not yet available but that should reduce the cost of trade for leading Ukrainian exports to the U.K. which are led by agricultural products (corn, canola and sunflower seeds) as well as steel and electrical components.

The U.S. Department of Agriculture has noted that purchasing patterns for wheat globally are already shifting as a result of the conflict in Ukraine with supplies from the EU, India, Australia and Argentina providing alternative supplies.

The U.S. government has issued an emergency waiver to allow more widespread sale of “E15 gasoline” which uses a higher proportion of ethanol. That’s designed to spread out more expensive base gasoline stocks in response to higher oil prices.

The lockdown in Shanghai has also led several electronics manufacturers to shutter production either due to direct factory closures or the knock-on effect from reduced availability of trucking or components.

U.S. business inventories as a proportion of sales remained near their record lows in March. The aggregate ratio increased to 1.26x compared to 1.25x after sales growth (including manufacturing, retail and wholesale) of 1.0% sequentially was more than offset by a 1.5% rise in the value of inventories.

Chart of the Week - Blocked Bridges 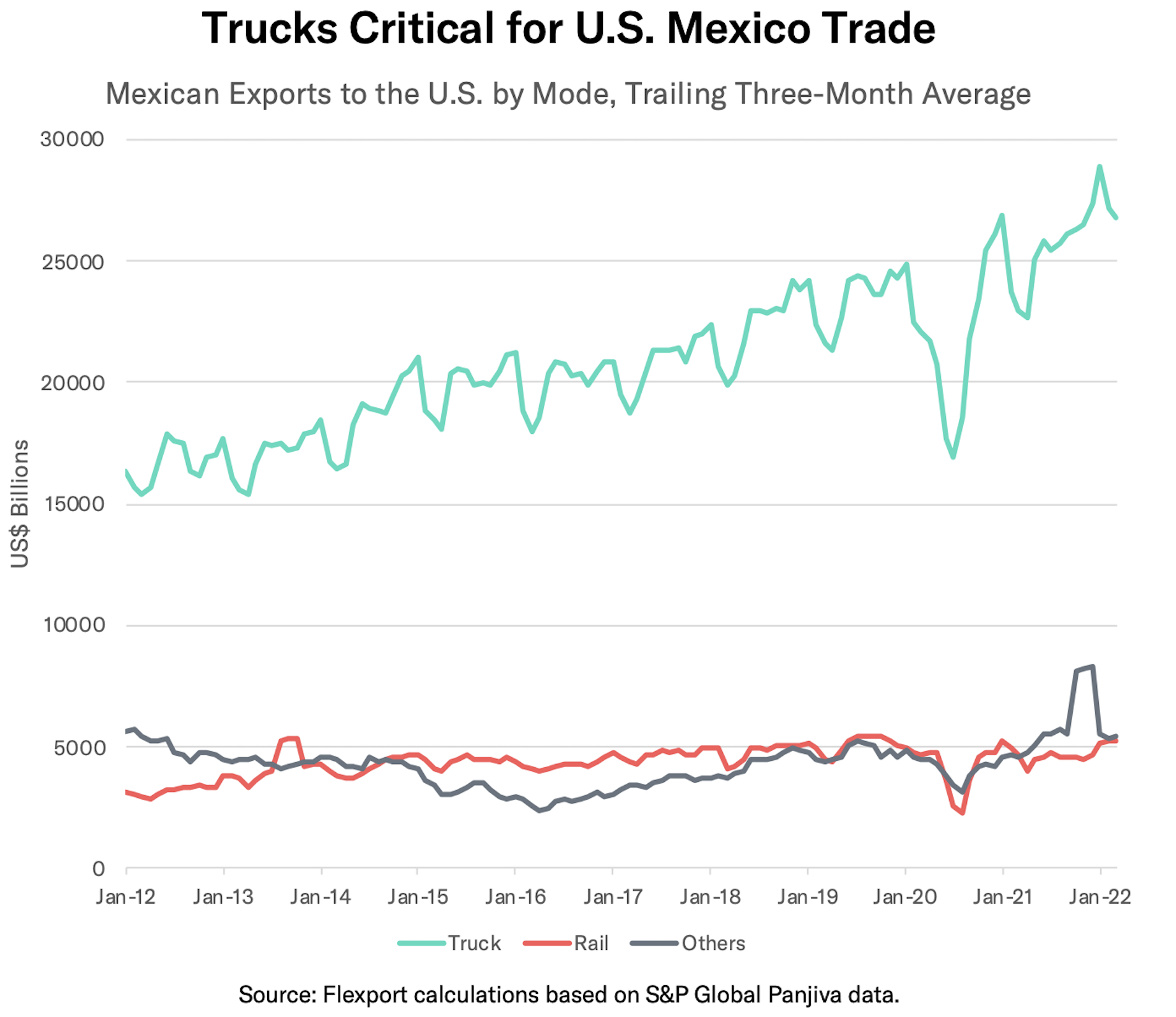 U.S. supply chain operatives got a reminder this week that logistics challenges aren’t just a transoceanic issue. Truck drivers blockaded two bridges in Texas in protest of new inspection regulations issued by the state. The bridge between Reynosa and Pharr, Texas and the Zaragoza bridge in El Paso saw protests, pushing truck traffic to other crossings. Trucks accounted for 70.9% of Mexican exports to the U.S. by value in 2021 according to S&P Global Panjiva data, increasing by 20.8% year over year in January and February.

Data from the U.S. Census Bureau shows that the ports for the two bridges, Hidalgo and El Paso respectively, accounted for 6.3% and 2.1% of U.S. imports from Mexico in 2021. Texas announced that restrictions on crossings from the state of Nuevo Leon would be lightened, but remained committed to enhanced inspections on other traffic, including the bridges that saw protests.