Find Another Way - Rail Networks During the Ukraine Conflict

How relevant is rail to Asia-Europe trade? What’s happening during the Ukraine conflict? Are there alternatives? The use of rail freight for shipping from China to the EU has grown by 28% annually over the past five years yet only represents 4% of shipments. Automotive and capital goods shippers are more exposed than most and will have to find alternatives - principally via ocean shipping - during the conflict.

Asia-Europe logistics services have faced significant disruptions during the pandemic. Global airfreight operations have been impacted by the closure of Russian airspace to European and U.S. airlines, while Russian air cargo capacity has been withdrawn from the market.

While ships and planes may reroute around problematic areas, trains cannot. Early on in the conflict, this led Flexport and others to suspend rail bookings on Trans Siberian routes. The steady expansion of sanctions against Russian firms, including Russian Railways, the national railway operator, has provided another complication.

In recent years, the use of railways to augment ocean and airfreight shipping on Far East Westbound (FEWB) routes has been central to the Chinese government’s Belt and Road Initiative. The main routing from China to Europe goes via Russia, Belarus and Poland, while a secondary routing goes via St. Petersburg for ocean shipment onto the rest of the EU.

The routing became significantly more popular in 2017 and 2018 with freight forwarders and rail operators and container lines offering both pure rail and combined ocean-and-rail offerings. Faster transit times have been a key attraction, with Guangdong-to-Germany routes typically taking 20 days via rail compared to over 100 days currently as shown in Flexport’s Ocean Timeliness Indicator. 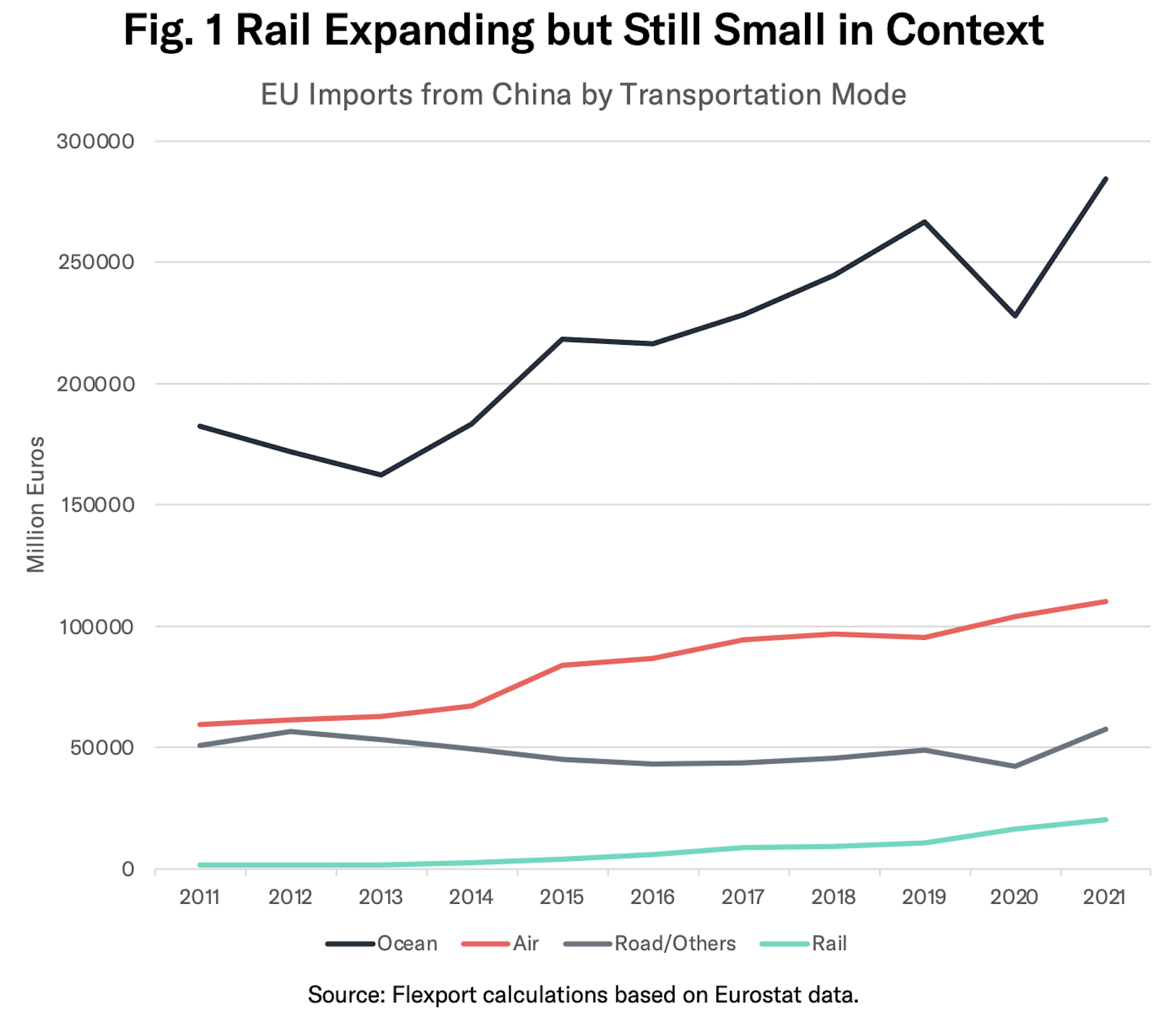 Imports to the European Union from China were worth 20 billion euros in 2021 according to official data. That represented growth of 21% compared to 2020 and annualized growth of 28% over the past five years.

Rail freight accounted for 4.2% of all EU imports from China in 2021 compared to 1.1% in 2015. The expansion in share came mostly at the expense of ocean freight which fell to 60.2% from 62.2% over the same period. The rail share for eastern European and Baltic states is higher, for example reaching 15.9% for the Czech Republic and 12.9% for Finland.

Disruptions will also impact shipments from South Korea and Japan which are also carried on combined sea-and-rail routes. Those countries' shipments are an order of magnitude smaller at 2.5 billion euros and 380 million euros respectively in 2021.

The combination of timeliness and ability to deliver to inland destinations has made the use of rail on FEWB routes attractive for both manufacturers and retailers. Issues regarding cost will have become more relevant following the surge in shipping rates over the past two years. 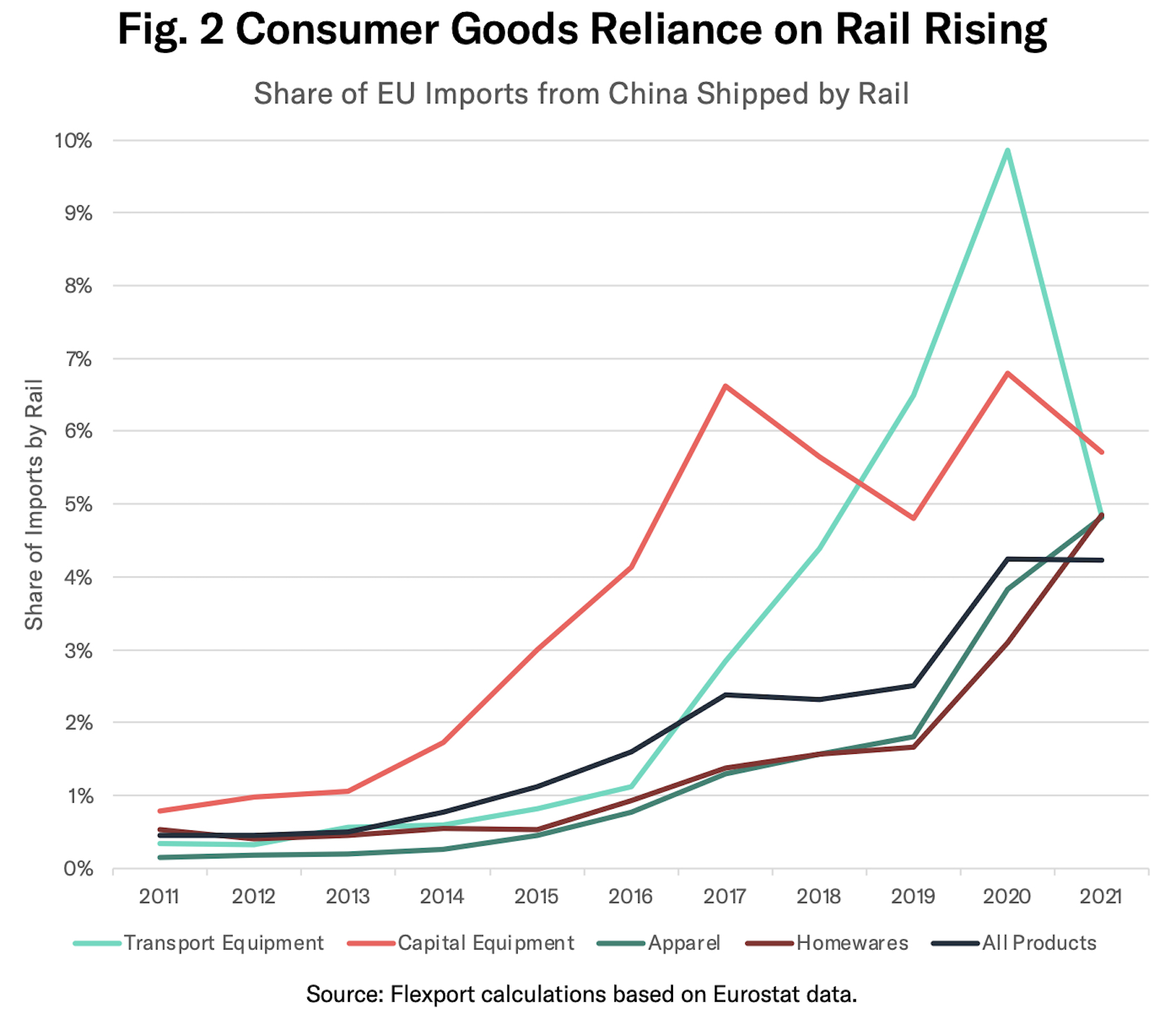 The sector with the highest proportion of imports by rail from China in 2020 was transportation equipment, including completed vehicles and parts, with rail reaching a peak of 9.9% of EU imports from China in 2020.

Supply chain interruptions in 2021 related to a shortage of semiconductors meant the ratio dropped to 4.8%. Capital goods, for example power generating equipment and other break-bulk as opposed to containerized freight, was the single largest category in 2021 representing 5.2 billion euros of shipments and a 5.7% share of such products.

Among consumer goods there’s been rapid growth in shipments of both homewares and apparel using rail, reaching 4.9% and 4.8% of imports respectively in 2021. Apparel is also the single most valuable consumer product group with a total of 2.4 billion euros shipped from China to the EU by rail in 2021.

Back to the Sea

As discussed in Flexport’s recent State of Trade webinar, there are good reasons to believe that the sanctions against Russia will endure for the near term. That may mean the utility of rail routes is reduced for an extended period.

There are some questions, however, as to whether all rail freight transit to / from the EU and Russia remains sanctioned. Additionally, press reports suggest that rail operators in China are offering to pay for shippers’ war insurance costs.

Nonetheless, one option is to consider alternative services, including new routes via Kazakhstan and Azerbaijan into southern Europe.

Another option is to return to ocean or airfreight shipping depending on timeliness requirements and unit economics. As mentioned already, ocean freight remains beset by delays while airfreight costs may be prohibitive—speak to your Flexport contact for more information.

Conclusion: Improved timeliness has led shippers in several industries, particularly autos and capital goods, to utilize rail shipments from China to Europe. The war in Ukraine and related sanctions against Russia have limited the viability of such routes, potentially requiring a return to slower ocean services.