The Bank of England has been at the forefront of tightening monetary policy with the first rate rise made in December. So far inflation and the housing market have yet to respond, though consumer spending is falling. More tightening may be ahead - the last time CPI was at 9.1%, base rates were 10x their current level.

In Focus - Bank of England Moved First, Has Further to Go 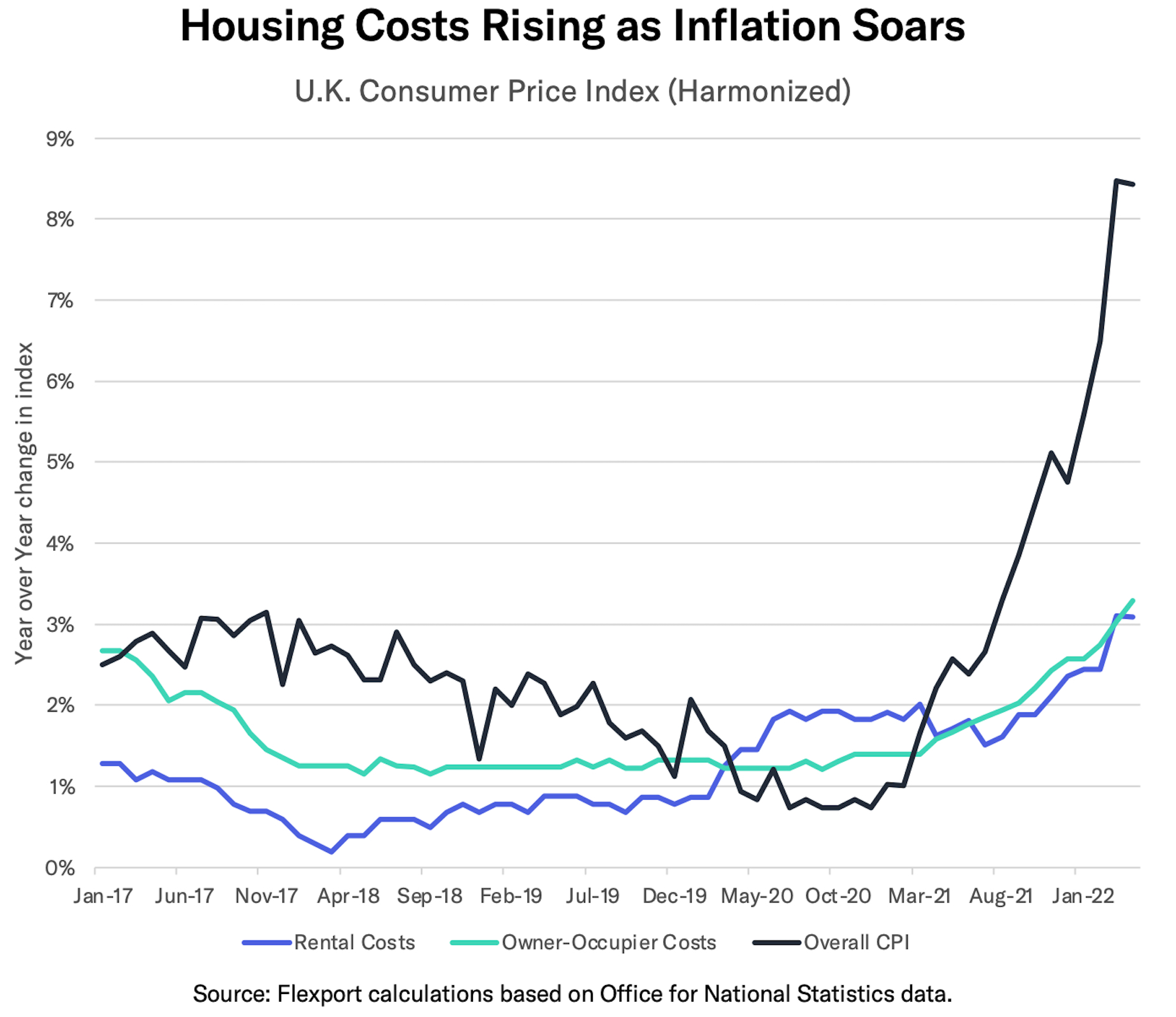 In recent research we flagged that the U.K. has been at the forefront of the consumer-led economic slowdown. A surge in inflation, which has left harmonized CPI at 9.1% in May, led the Bank of England to start to raise interest rates in December 2021, well ahead of more recent moves by the European Central Bank and the U.S. Federal Reserve.

Has this early rising had a significant impact on the economy?

The short answer is: not yet. First, bear in mind that Bank of England Base Rates are still only 1.25%. The last time inflation reached 9.1% (in December 1990) the Minimum Band 1 Dealing Rate (the base rate of its time) peaked at nearly 15%!

One peculiarity of the U.K. economy is the prevalence of variable rate mortgages (around one-quarter of all mortgages), which move up and down in-line with Bank of England base interest rates, and fixed rate mortgages with a typical life of under five years (much of the remainder) of which 20% need refinancing each year.

The average mortgage rate in the U.K. is now around 4.9%, so each 25 basis point increase in base rates will add 5% in pound sterling terms to spending on housing costs. This will likely mean that higher interest rates will be a drag on consumer spending for an extended period.

Higher rates will start to add to inflation too. As shown above the owner-occupier housing cost inflation rose by 3.1% in May, up from 2.2% at the start of the year and the fastest rate of increase since April 2009. Rental incomes, which can lag owner-occupier figures in reflecting the cost of landlord’s expenses, have increased at a similar rate.

The housing market has started to slow, perhaps indicating one sign of the impact of rising rates, though not yet significantly. The average number of homes changing hands in the three months to May 31st was 20% lower than a year earlier but still 11% higher than in 2019.

Reduced home transactions will cut into demand for durables such as furniture and nondurables like building supplies which in turn will drag on trade activity. As noted below consumer spending on such products have already started to decline.

The real crunch for the economy may come, however, if house prices start to fall. That could have a marked impact on people’s wealth and, in turn, on their willingness to spend rather than save. So far, prices have stayed robust, rising every month since November at an average rate of 1% and are now 12% higher than a year ago. The Bank of England has said that it expects inflation to begin to fall in 2023, while reiterating its 2% inflation rate target.

This all shows that the transmission of monetary policy tightening into the real world economy can take several quarters, complicating the job of central banks as they attempt to calm raging inflation.

The next edition of the Weekly Economic Report will be out on July 5 as we take a breather for the U.S. Independence Day holiday.

The Flexport Ocean Timeliness Indicator for Transpacific Eastbound routes fell by one day to 97 days while the first stage of the shipping process has declined to the lowest since June 2021. Flexport’s Air Timeliness Indicator meanwhile remained unchanged at just over 11 days.

Flexport research reports in the past week include a review of whether sanctions imposed against Russia have had an impact on global trade. We find that Russian imports have collapsed, largely due to lower aerospace and autos shipments. Exports by contrast remain robust as commodity flows realign on a global basis.

The University of Michigan’s survey of U.S. Consumer Sentiment hit its lowest level on record in June. The part of the survey that seemed to give markets hope, however, was the long-term inflation expectations measure, which receded from a preliminary 3.3% to a final 3.1%.

As further evidence of the breadth of global inflation concerns, the Canadian inflation rate rose to an annual 7.7% in May, the highest since 1983.

Existing U.S. home sales declined for the fourth straight month in May, though the median price set a new record and was up 14.8% from a year before. New home sales in May reversed a four-month decline and 10.7% above the revised April rate.

The European Parliament has finally passed the legislation needed to implement the Carbon Border Adjustment Mechanism. The coverage of CBAM has been widened to include certain chemicals and plastics. Further changes may be needed after consultation with member states, as detailed in our two-part research on the topic.

The U.K. has launched free trade talks with the Gulf Cooperation Council, following the post-Brexit launch of discussions with Canada, India and Mexico. The U.K. will reportedly look for improved access to food markets as well as financial services liberalization.

The Biden administration appears to still be considering the future of Section 301 duties on imports from China. On the one hand there’s the imperative of reducing inflationary pressures while on the other the administration is keen to retain “a significant piece of leverage”.

Strikes are a spreading problem for logistics networks, as flagged in recent research. A one-day strike at the port of Antwerp came at the same time as a one-day stoppage at three German ports. Rail strikes are also taking place in the U.K. and Canada. The former has proven more disruptive than the latter.

A new survey by the European Union Chamber of Commerce in China has indicated that 23% of firms plan to move current or budgeted investments away from China. That was up from 11% in the prior survey.

Flooding in Guangdong, China has reportedly resulted in government-mandated closures of businesses for safety purposes with manufacturers and rail operators both affected

A group of four solar power project developers have decided to form a “U.S. Solar Buyer Consortium” to support manufacturing of panels in the U.S., with $6B of spending planned. That follows policy moves by the Biden administration to support domestic manufacturing.

Chart of the Week - Go-go Gasoline! 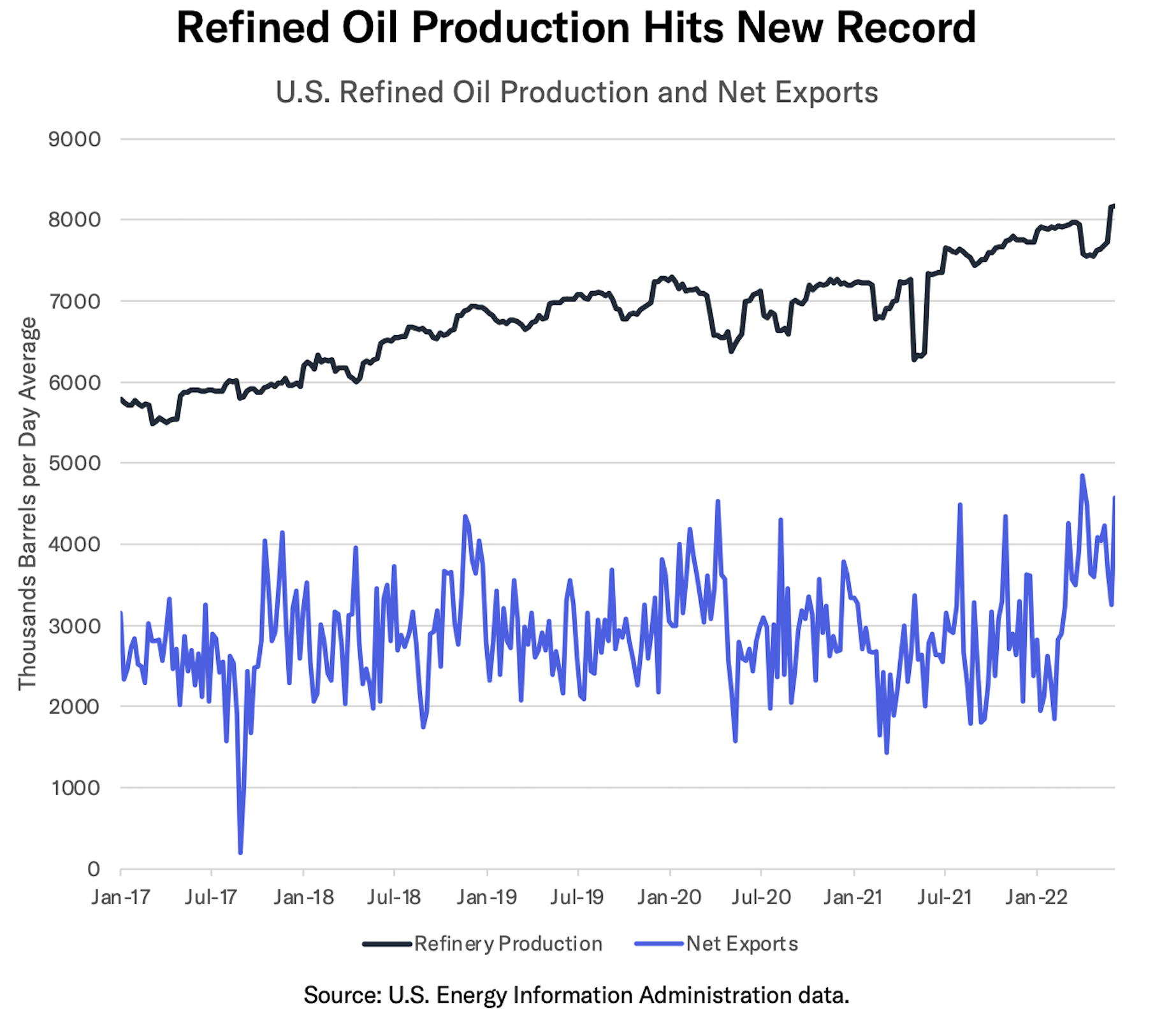 Supply chains have been beset by higher fuel costs in the wake of the conflict in Ukraine, which has disrupted global crude oil markets. The impact on both goods and personal transport has led the Biden administration to propose a gasoline tax holiday and to push to bring more refineries online to meet demand.

Another step may be to limit U.S. international trade in petroleum products. The chart above, based on U.S. Energy Information Administration data, shows that U.S. production of refined oil products - which includes gasoline, diesel and a variety of petrochemicals - has risen by 6% year-to-date as of June 10 to reach a record.

Yet, at the same time, net exports of refined oil products have risen by 92% having reached a record high in April. Net exports were equivalent to 49% of production in the past four weeks versus 37% on average in 2020.