By almost any measure, the U.S. labor market looks very strong. Unemployment was low, job creation was high, and there were record levels of job openings and quits. The combination likely means that wages will push upward and stoke inflation, despite weaker wage growth in April. 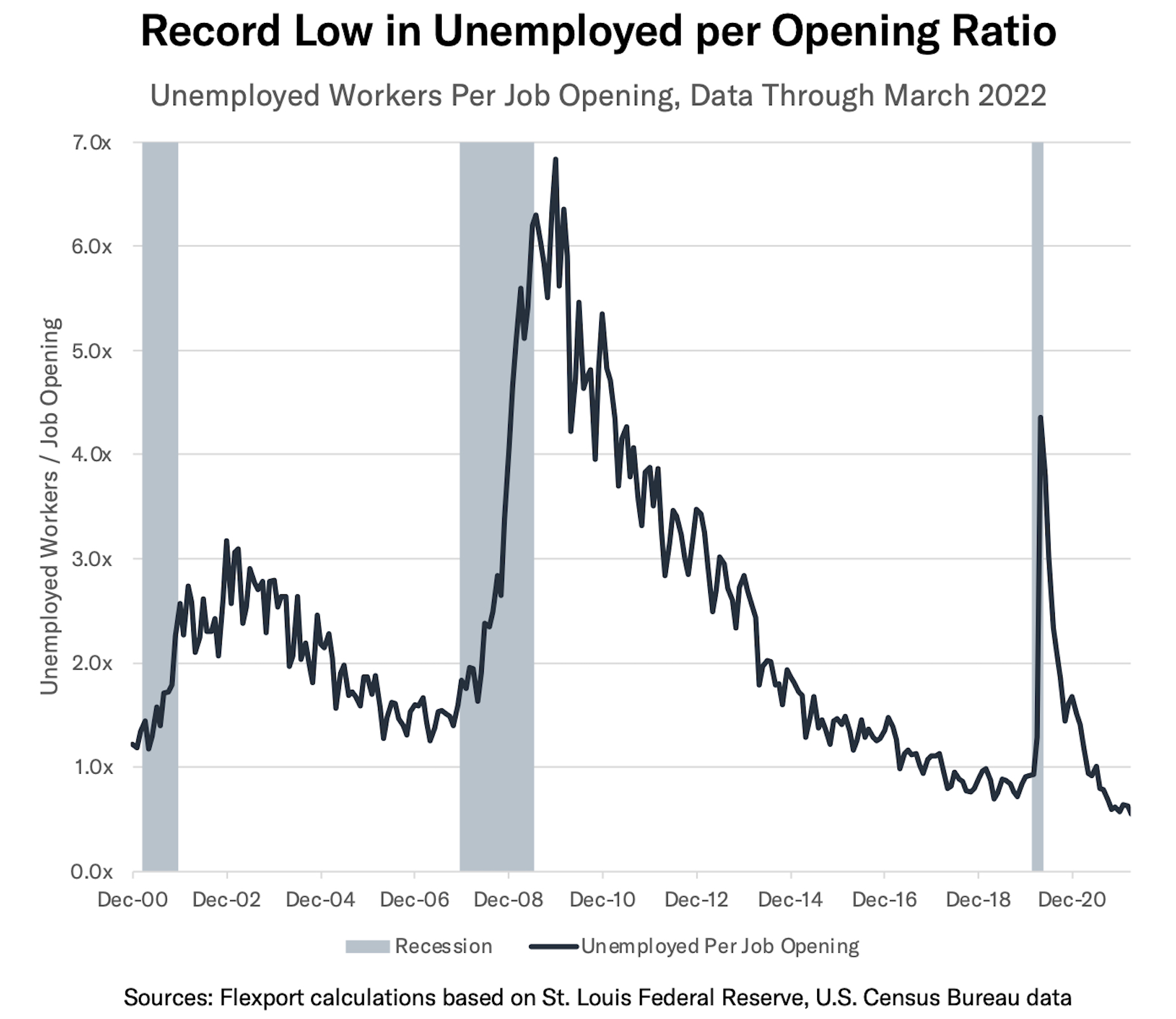 Data this week showed the U.S. job market to be strikingly robust. According to the monthly report on the employment situation in April, there were 428K new jobs and the unemployment rate stayed at 3.6%. That makes 12 straight months in which 400K jobs or more were created. The share of the population, aged 25-54, who were employed notched down slightly to 79.9%, which is roughly where it was in the late summer of 2019.

The chart above uses the turnover data to show how many unemployed workers there were for each job opening. The latest data point, for March 2022, was 0.54 – in other words, there were roughly two job openings for each unemployed person. This was the lowest number since the series started in December 2000. For perspective, the pre-pandemic low was 0.69 in April 2019.

Normally, a labor market as tight as this would create pressures for wage increases. For those worried about inflation, there was one intriguing figure in the April data that showed average hourly wages increased only 0.3% over March – a relatively tame figure that would extrapolate to a 3.8% annual increase. Yet this should do little to ease inflation concerns for a couple reasons.

First, it’s a volatile series, so one shouldn’t put too much stock in each monthly jag up or down. A smoothed version showing 3-month moving average median wage growth hit 6.0% in March and was rising rapidly.

Second, recent research by former Treasury Secretary Larry Summers and Alex Domash did a comparison between the job openings data and the better-known unemployment rate found that the figures had tracked each other very closely - until the pandemic. Then, the unemployment rate started behaving differently.

Their conclusion was that, in such an extreme case, a soft landing was unlikely. They argued that the inflation problem facing the Fed was “unlikely to be resolved without a significant economic slowdown.”

U.S. goods imports grew rapidly in March. On a census basis, real imports were up by 9.8% over February, and 13.8% over March of 2021. The strongest category was consumer goods, up by 21.9% in real terms over a year before.

New orders for manufactured goods in the United States rose 2.2% in March, a rebound from an anemic 0.1% increase in February.

Unemployment in the Euro Area fell to 6.8% in March, down from 6.9% in February and 8.2% a year before. The number is the lowest registered in the series dating back to 2008.

Retail trade volume fell by 0.4% in the Euro Area in March versus February but was up 0.8% compared with a year earlier.

China’s international trade activity increased by just 2.1% year over year in April, marking the slowest rate of growth on that basis since June 2020. The closure of manufacturing activity in Shanghai is a major contributor, resulting in imports that were unchanged and exports that rose by just 3.9%. While representing a slowdown, activity was still 32.9% higher than April 2019.

The Federal Reserve hiked the Fed Funds rate by 50 basis points and presented its plan to start working down its nearly-$9tn balance sheet. Under the plan, the balance sheet will shrink as debt matures, with a cap of $47.5bn/month for the first three months, then $95bn/month.

Multiple other central banks hiked rates in the face of inflation. The Bank of England took rates to the highest level in 13 years. The Reserve Bank of India implemented an unscheduled rate hike. Australia substantially increased its inflation forecast and also raised rates.

The U.S. Trade Representative’s office issued an official notice of its mandatory four-year review of the Section 301 tariffs on China. There are reports that Biden administration officials are split over how to proceed with the tariffs.

A local industry association has noted that apparel factories in Vietnam are facing a shortage of raw materials due to factory closures in China. Two of the major sports apparel manufacturers have also noted the impact of China’s closures on their sales in Q1’22.

Chart of the Week - Russian Oil Under Pressure 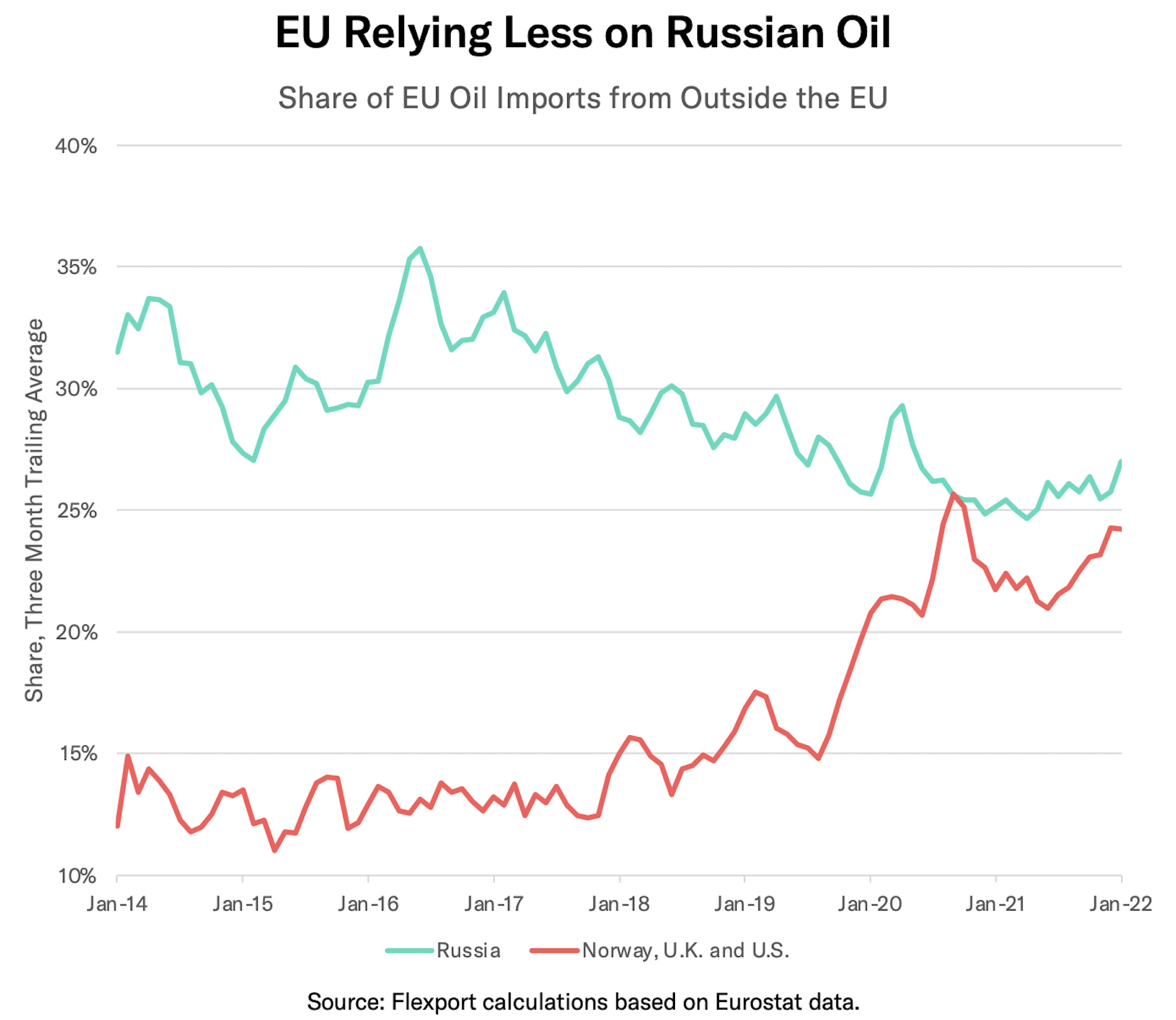 The European Commission has proposed a ban on imports of crude oil from Russia, due to take effect within six months subject to EU member states’ agreement, with three countries being provided a derogation until 2024.

The action represents the latest escalation of sanctions against Russia in connection to the conflict in Ukraine. It follows a similar move by the United States and is joined by a G7 declaration to the same effect.

As indicated in the chart above, Russia accounted for 26% of EU imports of crude oil in 2021 which already represented a decline from 31% in 2014. Instead EU importers have increased their shipments from the U.K., Norway and the United States with the latter reaching 24% of the total in the three months to January 31, 2022 compared to 27% for imports from Russia.