A strike by port workers at Felixstowe in the U.K. is just one of several such labor disruptions facing supply chains in 2022. Felixstowe is the largest container port in the U.K. As a result, the impact of a proposed 8-day strike will have implications for both local supply chains–particularly in apparel–and global logistics networks. If the proposed time-limited strike occurs, it could take several weeks for the port to recover and the impact on global logistics networks to unwind.

The port workers’ union, Unite, has confirmed plans for a strike at the U.K. port of Felixstowe from August 21 to August 28, 2022. While talks with the ports’ owners continue, the likelihood of operational disruptions is high.

Aside from the planned strike at Felixstowe, there are also plans for industrial action at the port of Liverpool. The strike at Felixstowe also follows recent action at German ports and operational slowdowns at Dutch ports, linked to inland transportation strikes. Looking further afield, contract negotiations are still underway on the U.S. west coast. Recent actions in South Korea show that other modes of transport are also exposed to labor unrest.

For context, Felixstowe is the largest container port in the U.K. by capacity, according to Alphaliner data, with 5.5 million TEUs of annual handling capacity. The port accounted for 32% of containerized freight handling in 2021 according to U.K. government figures. 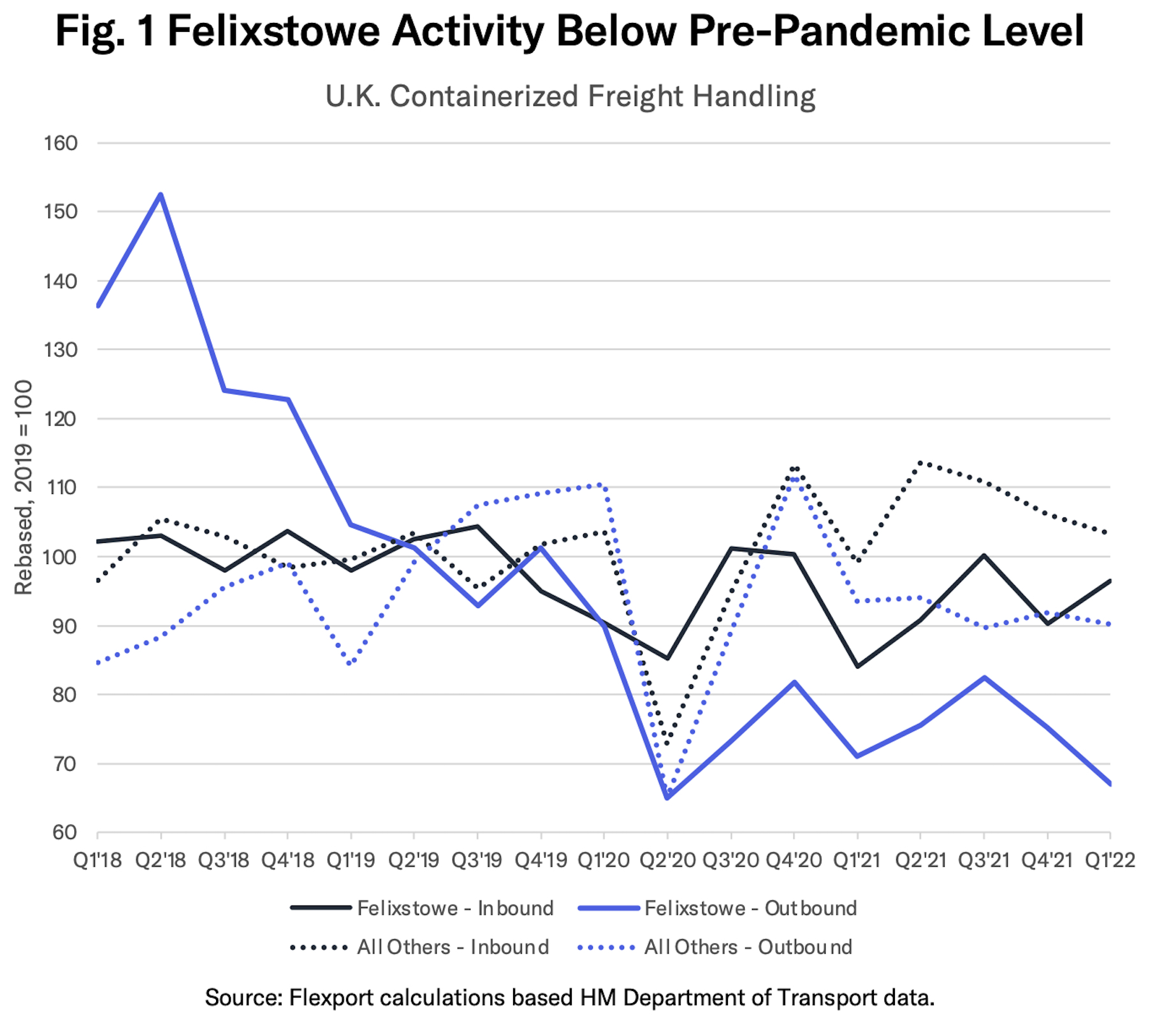 Volumes handled at Felixstowe have yet to recover to pre-pandemic levels, as shown in Figure 1. Containerized freight inbound to Felixstowe in Q1’22 was 4% below the 2019 average. Outbound freight was 23% lower on the same basis. By contrast, inbound traffic to all other ports was up by 3% with outbound down by 10%.

The underperformance of Felixstowe is likely to have many causes. One is the reduced availability of trucking capacity in late 2021, which may have acted as a drag to growth during the pandemic-era burst of consumer demand. 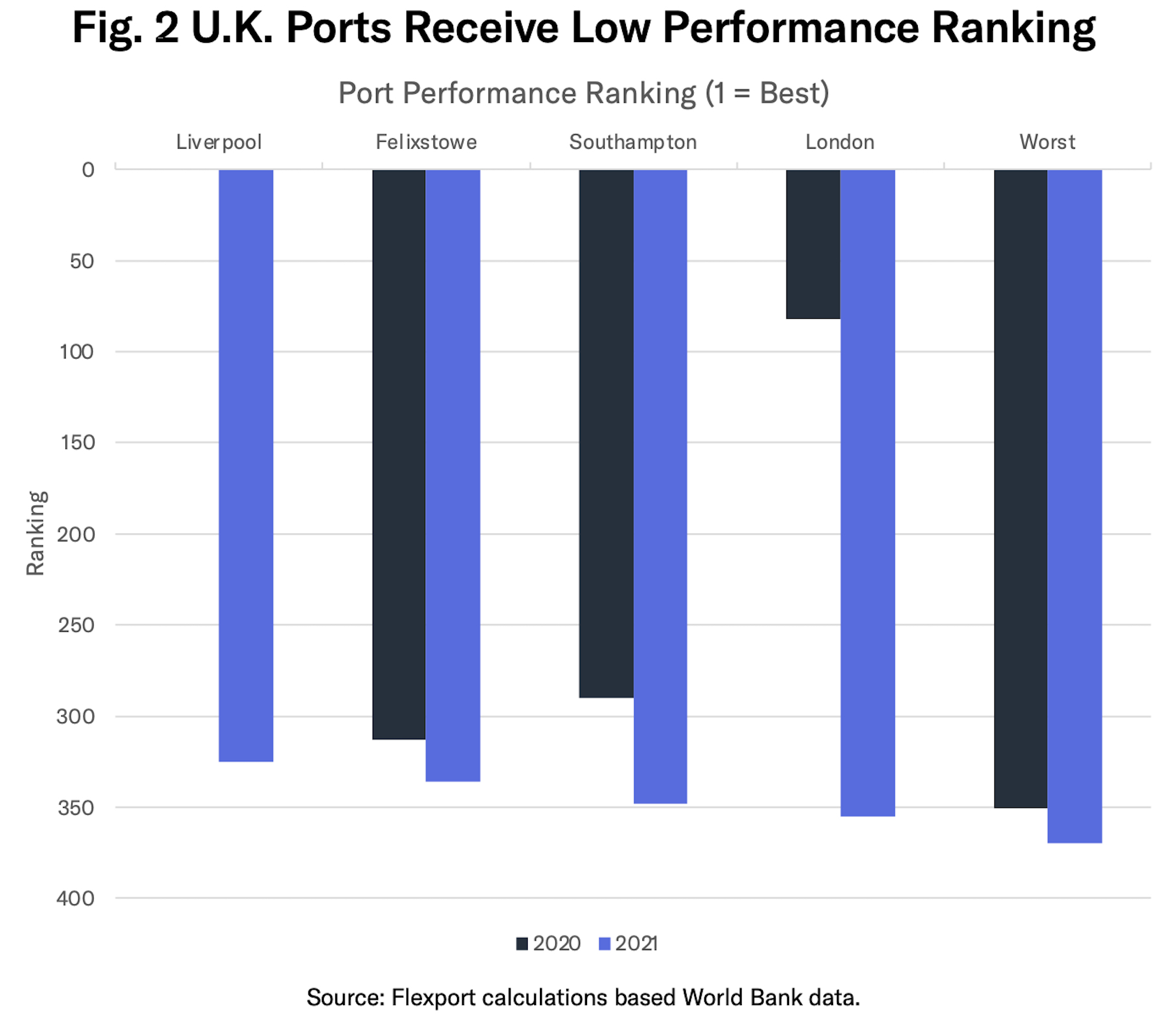 Another issue was an earlier, troubled IT refit at the port. That led to a redirection of container-line services away from the port in 2018 and 2020 by MSC and Maersk.

Who might be affected by a prolonged strike at Felixstowe? As mentioned already, Felixstowe handles 32% of all containers coming into or out of the U.K., raising the likelihood that most industries with international supply chains will feel an effect. 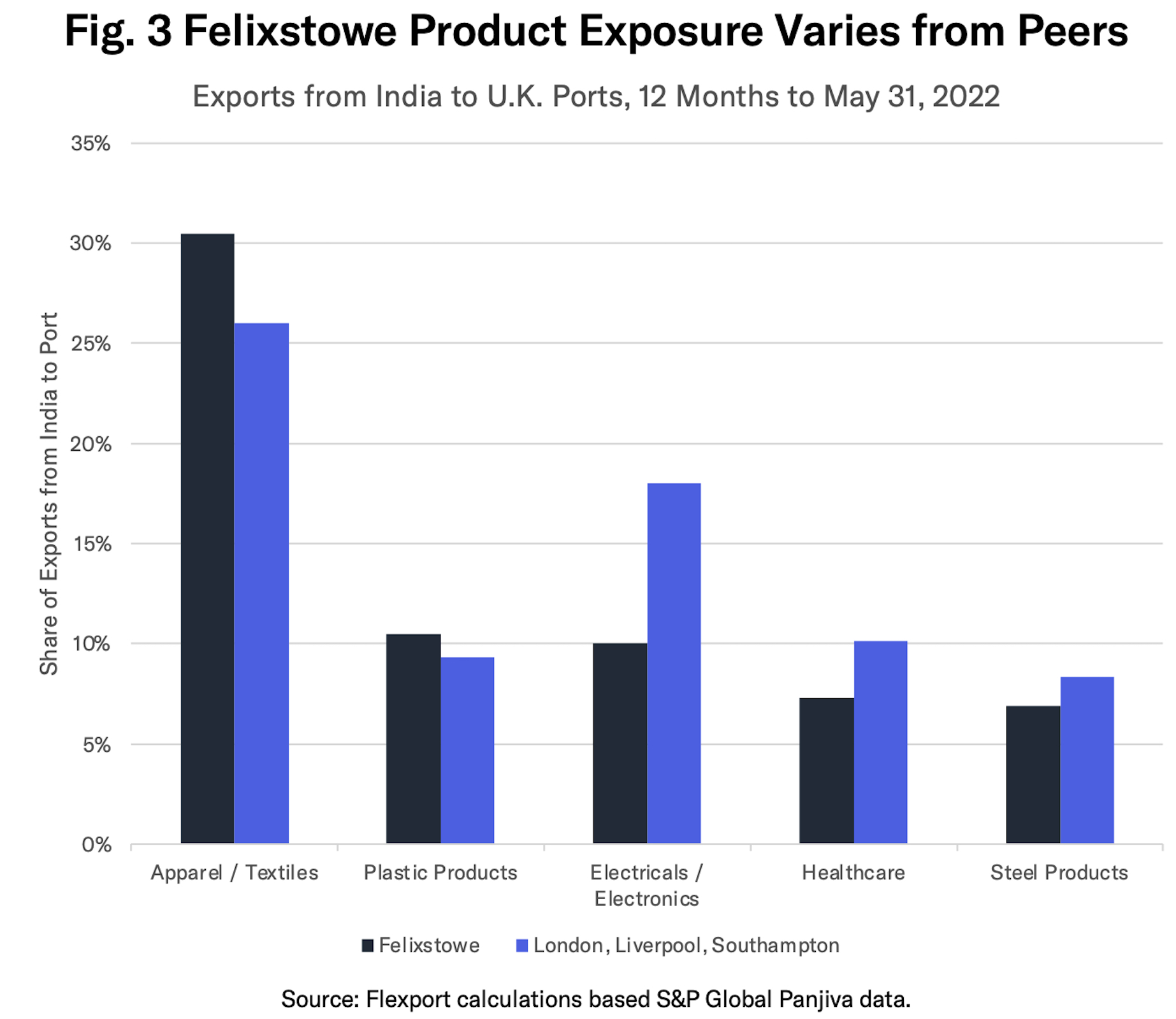 The precise industrial impacts are difficult to judge in the absence of clear bill-of-lading or similar data. The mix of shipments to Felixstowe nonetheless varies compared to the other major U.K. ports. Figure 3 shows the proportion of exports from India to Felixstowe, with textiles leading at a 31% share in the 12 months to May 31, based on data from S&P Global Panjiva.

By comparison, apparel only accounted for 26% of exports to the other three major ports. Similarly, electricals and electronics represented 10% of shipments to Felixstowe versus 18% to the other ports.

There will also be knock-on effects to global logistics networks. According to Alphaliner data, Felixstowe currently features on 15 weekly container and roll-on, roll-off ferry services. That includes nine intra-Europe services, two dedicated South Asia-Europe, with the remainder shipping to Europe from Asia more widely. The long-haul services are led by the Ocean Alliance, the 2M Alliance and Zim Shipping.

At a minimum, vessels may be diverted to other U.K. ports, particularly London Gateway, but also Southampton and potentially even to Rotterdam or Dunkirk, in extremis. As of August 17, the container lines have started to announce contingency plans. Those include rescheduling, but not canceling, calls at the port.

There’ll also be potential delays for vessels returning to Asia to collect further shipments for delivery into the peak season in Europe. It’s worth noting, many of the services coming to Felixstowe have around an 80-day transit period. It could, therefore, be a matter of months before the full impact is seen.

So, how long might a recovery take? Felixstowe port ran at two-thirds of nameplate capacity (TEUs handled as a proportion of capacity) in 2021 overall, based on U.K. government data. Assuming that still applies and that the other one-third of capacity can be fully utilized temporarily, it could take 24 days to work through the strike backlog.

Our colleagues in Flexport’s operations team have noted that delays could take anywhere from a few days to two weeks, based on recent experience of a strike at the port of Hamburg. Furthermore the time taken to move diverted containers back to their intended destinations could last for several weeks.

There are clearly a lot of uncertainties around these calculations:

Answers to these questions will only emerge as the strike gets underway.

Bullwhips vs. Full Ships - The State of Trade

Sort the Assortment - Dealing with a Weak U.K. Economy

How eCommerce Brands Can Sustain Growth During a Cash Crunch