The State of Global Trade - Bullwhips vs. Full Ships

What is the state of international trade? Will demand for goods remain robust? Have inventories been refilled yet? Are logistics bottlenecks clearing? In a recent State of Trade webinar we identified multiple signs of negative pressure though a downturn has yet to get fully underway. Flexport’s indicators (included in our EU and U.S. Logistics Pressure Matrices) can help you stay updated on the latest data to track what happens next.

Flexport’s State of Trade Webinar held on June 30, 2022 analyzed the latest economics and logistics data to determine whether we are on the cusp of a downturn, or whether elevated activity will continue. There are indicators of continuing economic strength and indicators suggesting a pullback to come.

The weight of evidence from the webinar suggests we are in the midst of a “bullwhip” situation-a concept first coined by Jay Wright Forrester in 1961-where supply chains are overly full of products as a result of earlier overestimations of demand.

Demand - Peaking but Yet to Fall

Real U.S. personal consumption expenditures on goods fell by 1.7% in May vs. April and have dipped to their lowest since December, led by a 3.5% slide in spending on durable goods. Yet, spending is still 16% above pre-pandemic levels and Flexport’s Post-Covid Indicator suggests demand will remain above pre-pandemic levels at least through September.

Similarly, EU retail sales dipped 1% lower in April versus March and are 10% above pre-pandemic levels. 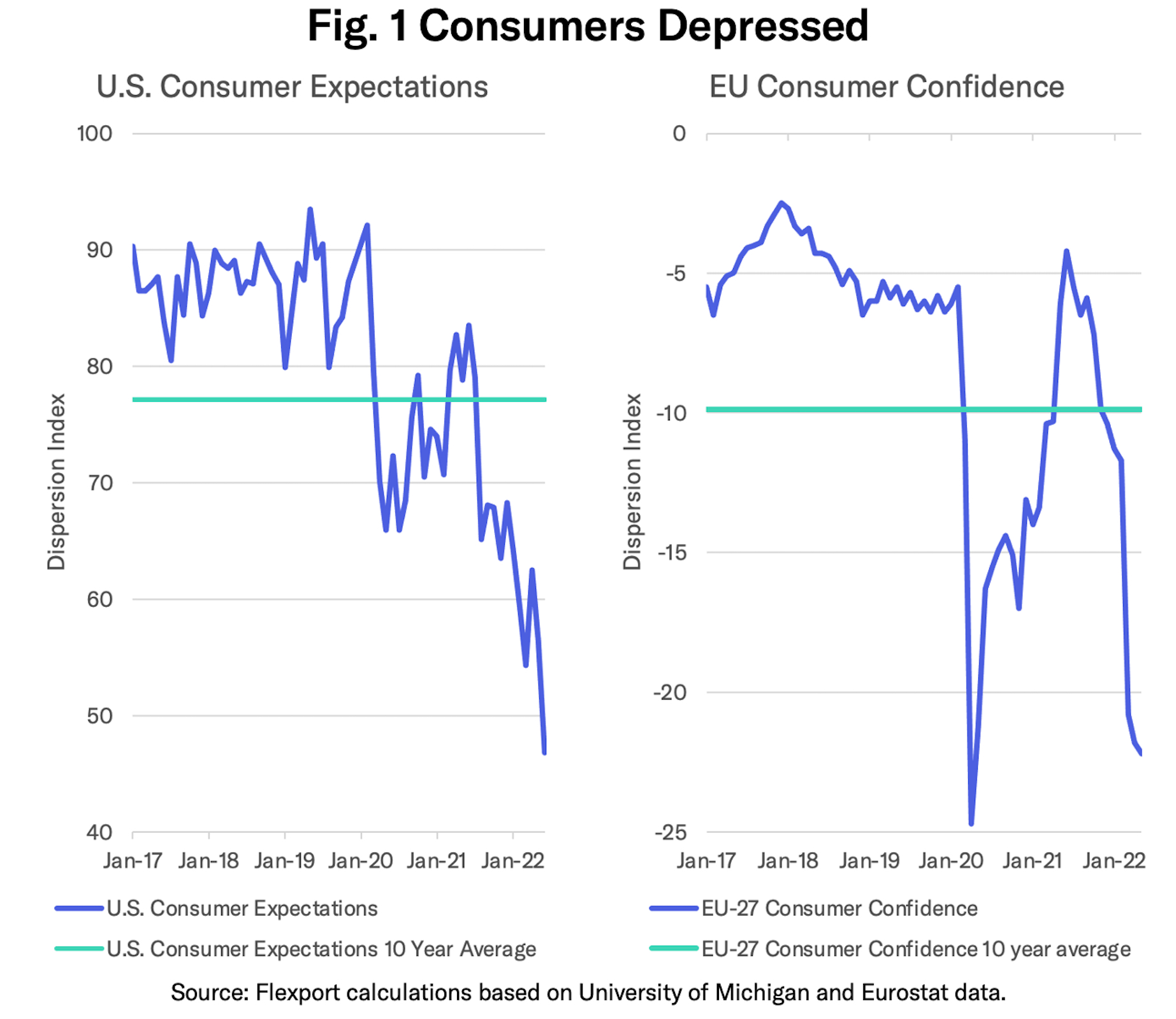 While employment levels are high-as discussed in Flexport’s Weekly Economic Report-a combination of persistent inflation, tighter monetary policy from the Bank of England, ECB and Federal Reserve as well as uncertainty from the conflict in Ukraine has left consumer sentiment in the U.S., UK, and EU well below long-term averages, as shown in the chart above. Depressed confidence may be indicative of a further downturn in demand to come.

In an audience poll, when asked what the U.S. economy will do in the next 12 months, around 32% of respondents flagged that we’re already in a recession that will worsen while 29% expect a hard landing-i.e. a recession caused by tighter monetary policy.

The earlier acceleration in demand, combined with supply chain disruptions and delayed shipping, has led firms to ramp up their orders. There are already signs that they may have done too much, with both macroeconomic and corporate financial data points indicating inventories as a ratio of sales have already recovered near to pre-pandemic levels. 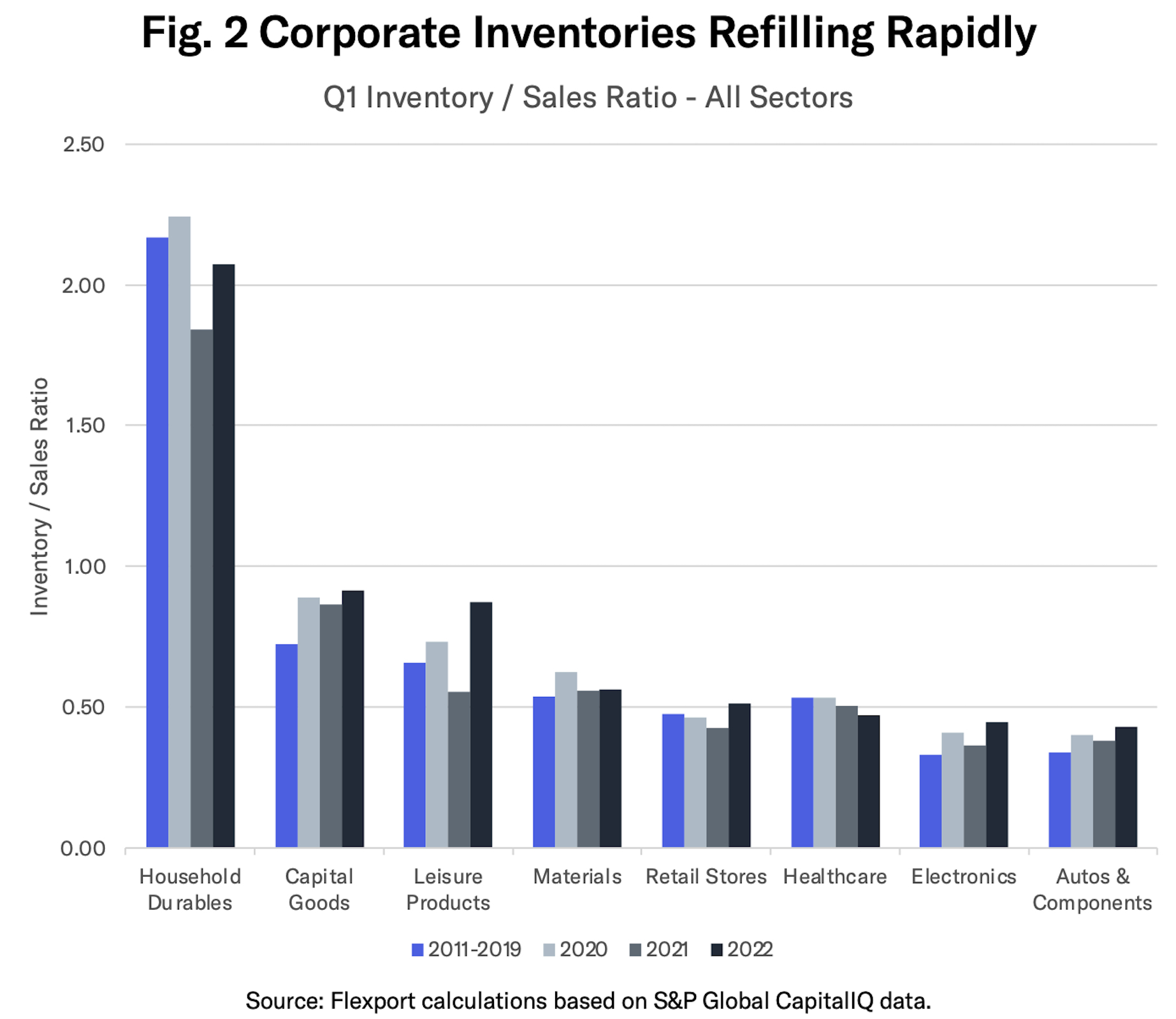 Flexport’s analysis of over 1,400 companies shows the inventory/sales ratio is already above pre-pandemic levels in Q1’22-as indicated in the chart above-in six out of nine sectors (excluding ecommerce which isn’t shown) after inventories rose by 13% and sales by just 6% in Q1’22.

When polled about recent inventory experience, 35% of the audience stated inventory has already gone up by more than planned due to lower sales while another 34% indicated they deliberately increased inventory due to supply chain worries.

Full inventories and the start of a downturn in demand bode ill for logistics volumes. We have yet to see a significant downturn in trade in either macroeconomic data or port activity in either the United States or the European Union as tracked in our Logistics Pressure Matrices (LPMs). Similarly, container shipping rates have yet to fall significantly on the basis of Shanghai Shipping Exchange data. 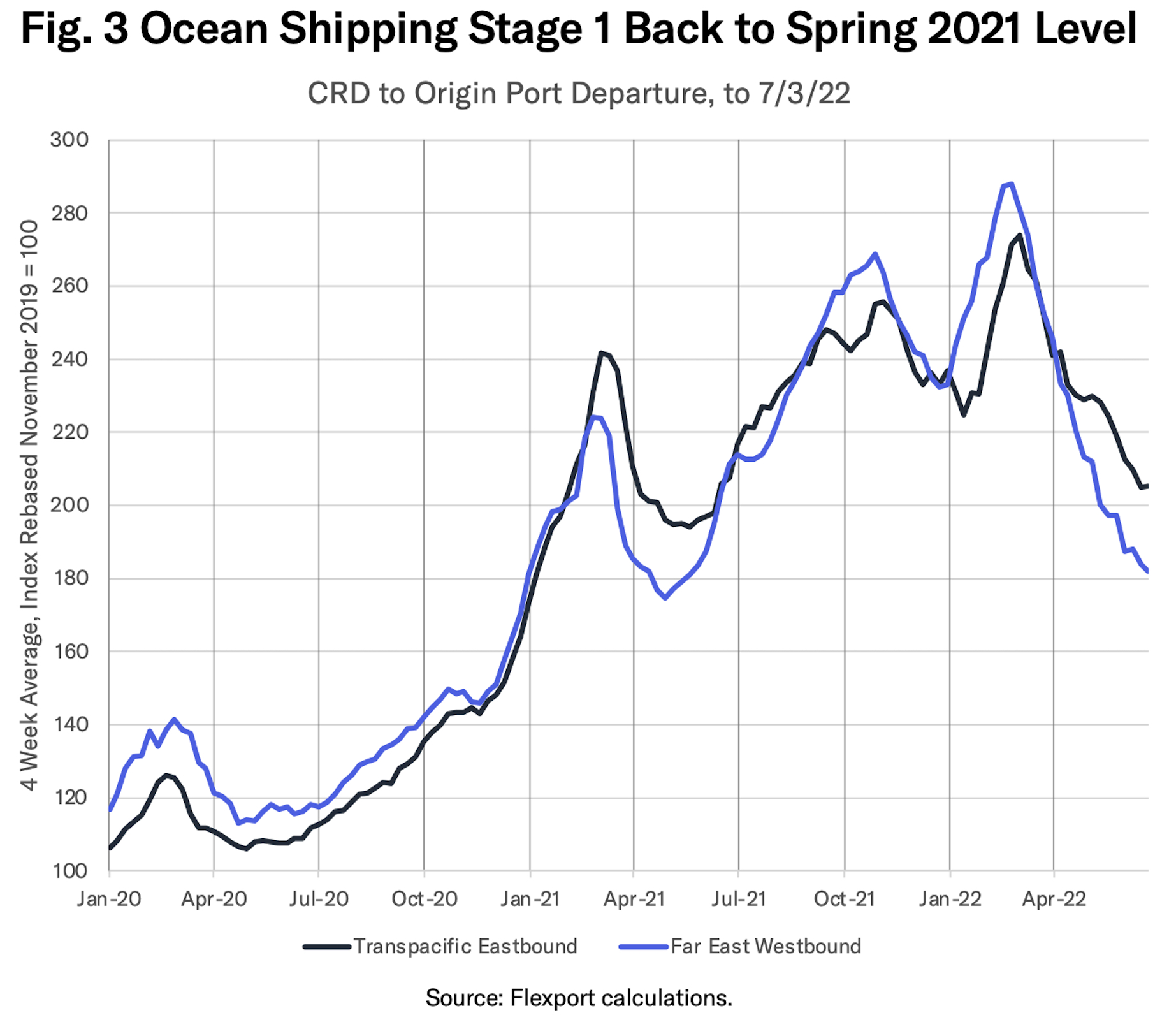 Flexport’s LPMs include the tracking of the first stage of ocean container shipping, covering cargo-ready to origin port departure in Asia. For both Asia-North America (Trans Pacific Eastbound or TPEB) and Asia-Europe (Far East Westbound or FEWB) the time taken to transit this first stage has fallen markedly during Q2’22. As of the four weeks to July 3, 2022 the stage 1 transit time on TPEB had fallen to its lowest since June 20, 2021 while FEWB was at its lowest since May 30, 2022.

The dip may reflect an extended period of factory closures in Asia rather than a drop in demand, nonetheless that leaves logistics networks in a clearer (but not yet debottlenecked) state ahead of the peak shipping season.

In conclusion: A downturn in demand for consumer goods and shipping services has yet to fully materialize, but already-full inventories mean that when it does arrive a drop in shipping activity could soon follow.