Which industries have driven the U.S. trade boom? Where might they go next? What will be the impact on the wider economy? Flexport’s Trade Activity Forecast (TAF) was launched in October 2021 to provide a guide to the outlook for U.S. merchandise imports. We have expanded the TAF to include U.S. exports and a gauge of the U.S. trade deficit. Our initial estimate indicates U.S. merchandise imports will grow by 3.7% sequentially in May and exports will dip by 1.2% while the trade deficit will reach $352 billion in Q2’22.

The State of U.S. Trade 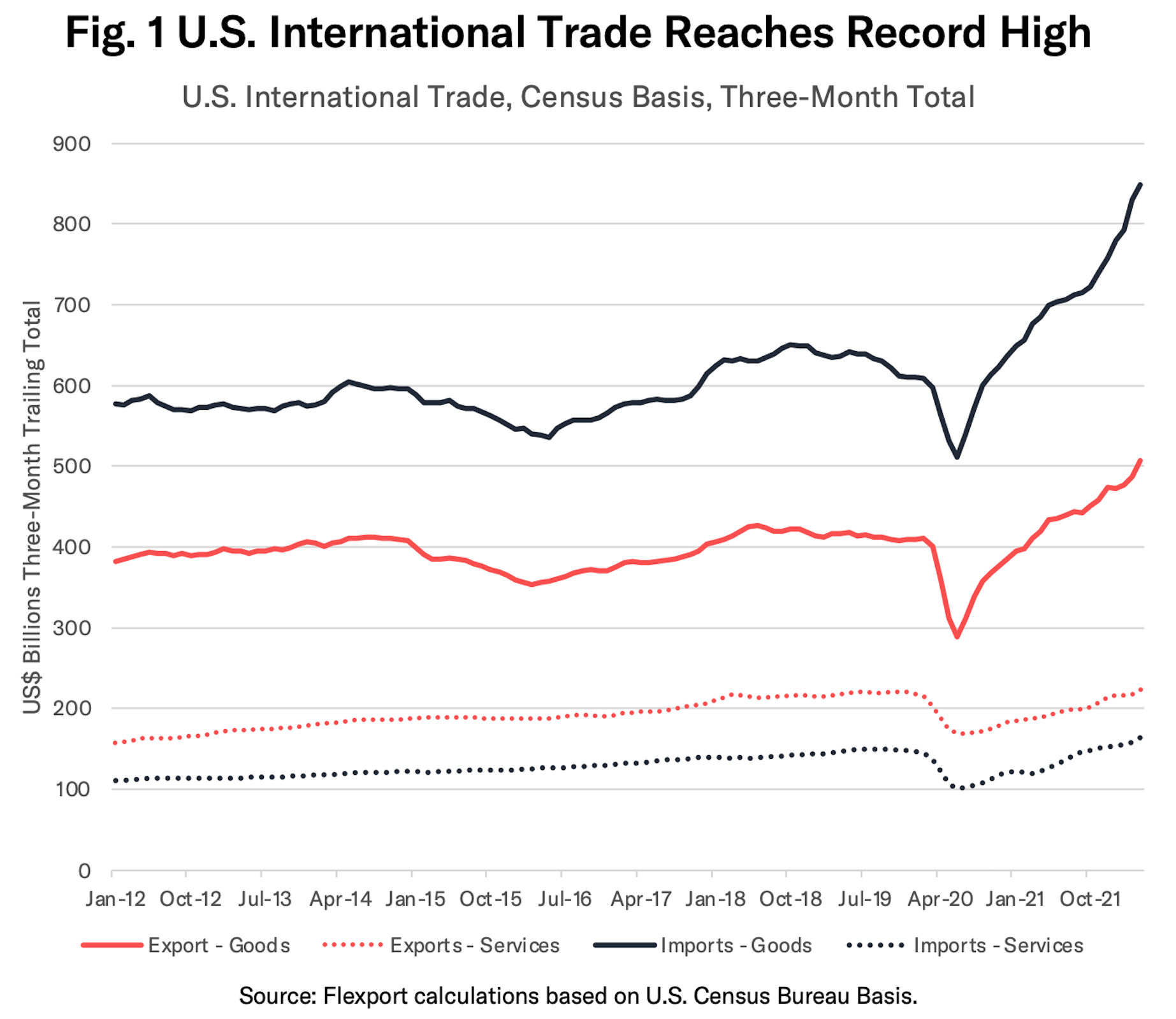 As shown in Figure 1 above, imports of goods have outpaced exports, partly reflecting the impact of elevated U.S. consumer spending power versus the rest of the world (stronger dollar).

The TAF Methodology and Interpretation

The question arises: where might merchandise trade activity go next? The U.S. Census Bureau publishes international trade data at a lag. Advance figures covering headline merchandise trade including industry aggregates are typically reported four weeks after the end of the month. Full figures, including product–level data as well as services trade information, arrive after six weeks.

In common with Flexport’s Post-Covid Indicator, the TAF is produced using a mixture of traditional momentum-based economic forecasting techniques combined with insights from Flexport’s shipping data.

The latter provides something of a back-stage pass for the trade sector and provides additional data on products due to arrive in (or leave) the U.S. before they enter the aggregated trade statistics. Our analysis suggests the addition of Flexport data significantly reduces the forecast error versus momentum-only forecasts. 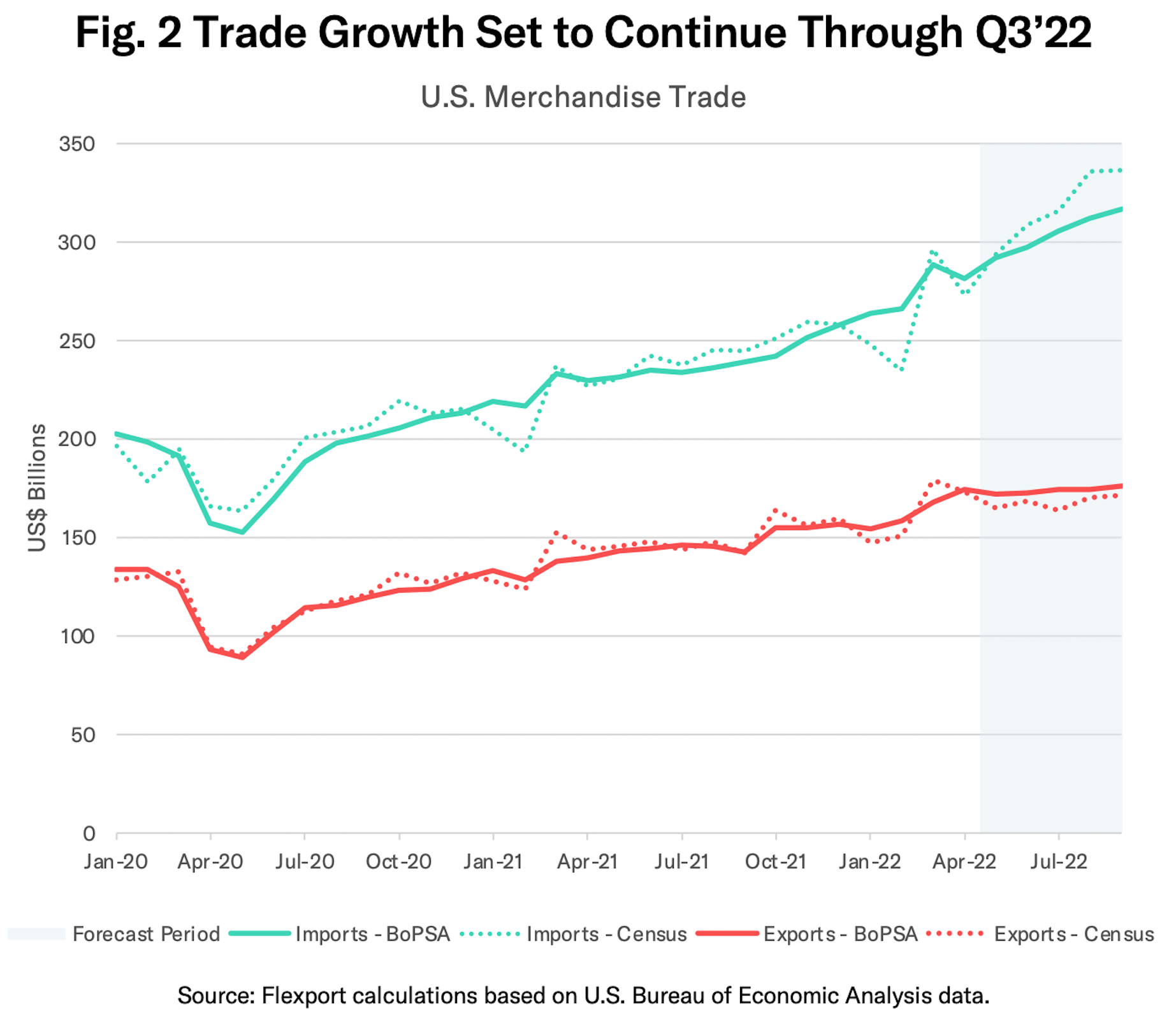 As discussed in prior research, there are several “flavors” of trade data available.They are produced on a Census or ‘balance-of-payments’ basis, and differ based on whether they are adjusted for seasonality or not.

The Census, non-seasonally adjusted versions, shown as the dotted lines in Figure 2, are suited for users looking for a guide to activity within supply chains on a short-term basis. This captures the unadulterated forecast of how many goods are expected to cross U.S. borders. The rate of growth in imports is expected to accelerate to 26% year over year in May, the fastest rate since June 2021. Exports, meanwhile, are expected to increase by a more modest 20%.

The balance-of-payments version, particularly when seasonally adjusted, is a key input for forecasting the wider state of the economy via the inclusion of net exports in the Gross Domestic Product calculation. When seasonal adjustments are added, this answers the question: are imports likely to be higher or lower than we would normally expect for this time of year?

The Importance of (Commodity) Price Inflation 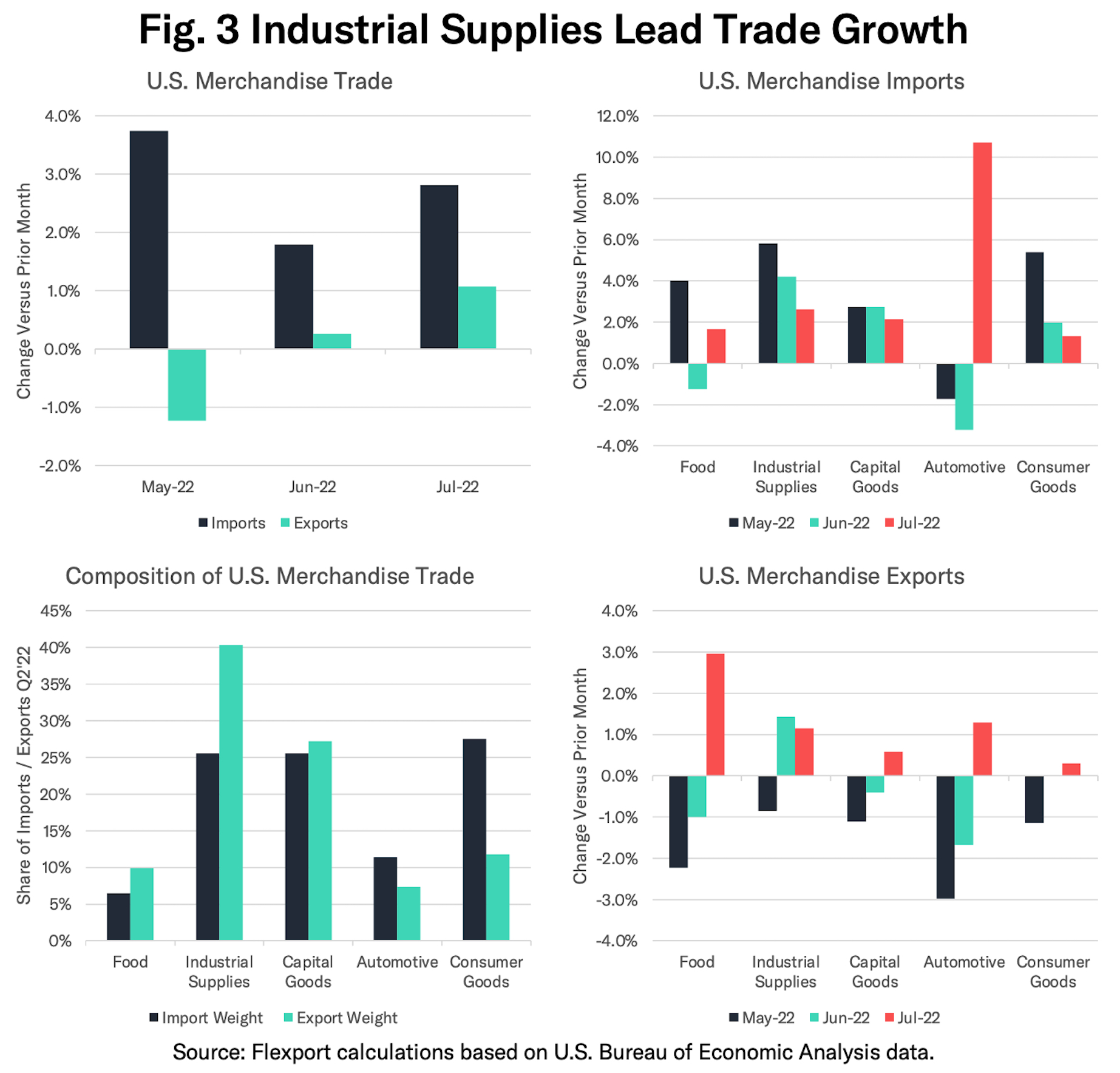 In the case of imports, on a balance of payments, seasonally adjusted basis, there is a broad spread of growth drivers with industrial supplies (commodities), capital goods and consumer goods each representing around a quarter of the forecast. Food and autos represent the remainder as shown in the bottom left chart of Figure 3 above.

For imports, three of the five categories are expected to continue to expand in the May to July period sequentially on a balance-of-payments, seasonally-adjusted basis. Industrial supplies are expected to grow the fastest and include imports of raw materials including energy, petrochemicals and metals among others, indicated in the top left chart of figure 3. There’s been a surge in global commodity prices in part as a result of the conflict in Ukraine.

The Outlook for the (Trade) Economy

While trade values matter for the logistics industry, do they matter for the economy at large? The trade-in-goods deficit (or more accurately “net exports”) has been repeatedly miscast as the villain of international trade policy over the past five years. This usually has to do with the misinterpretation of an accounting identity.

The output in question is also Gross Domestic Product (GDP). So, suppose we consume more imports. In this equation, M goes up, Net Exports goes down (equivalent to the trade deficit increasing) and GDP decreases. Simple, right?

This is where the misinterpretation comes in. Let’s say that the increase in imports comes from the consumption of an additional $30K car that was made in Mexico. Holding everything else constant, M goes up by $30K. But we won’t hold everything constant. That car is consumed; C also goes up by $30K.

That means, for GDP purposes, the two entries offset and the import has no net effect on GDP. If, however, we had predetermined that we were going to hit a certain level of consumption, then a shift from domestic production to imports would affect GDP.

For those tracking GDP, they often do form an idea of consumption separately from their idea of trade flows. Thus, news about trade deficits (Net Exports) tends to alter views on what GDP will be. It may seem a minor point, but the misattribution of causality can promote unwarranted protectionism. 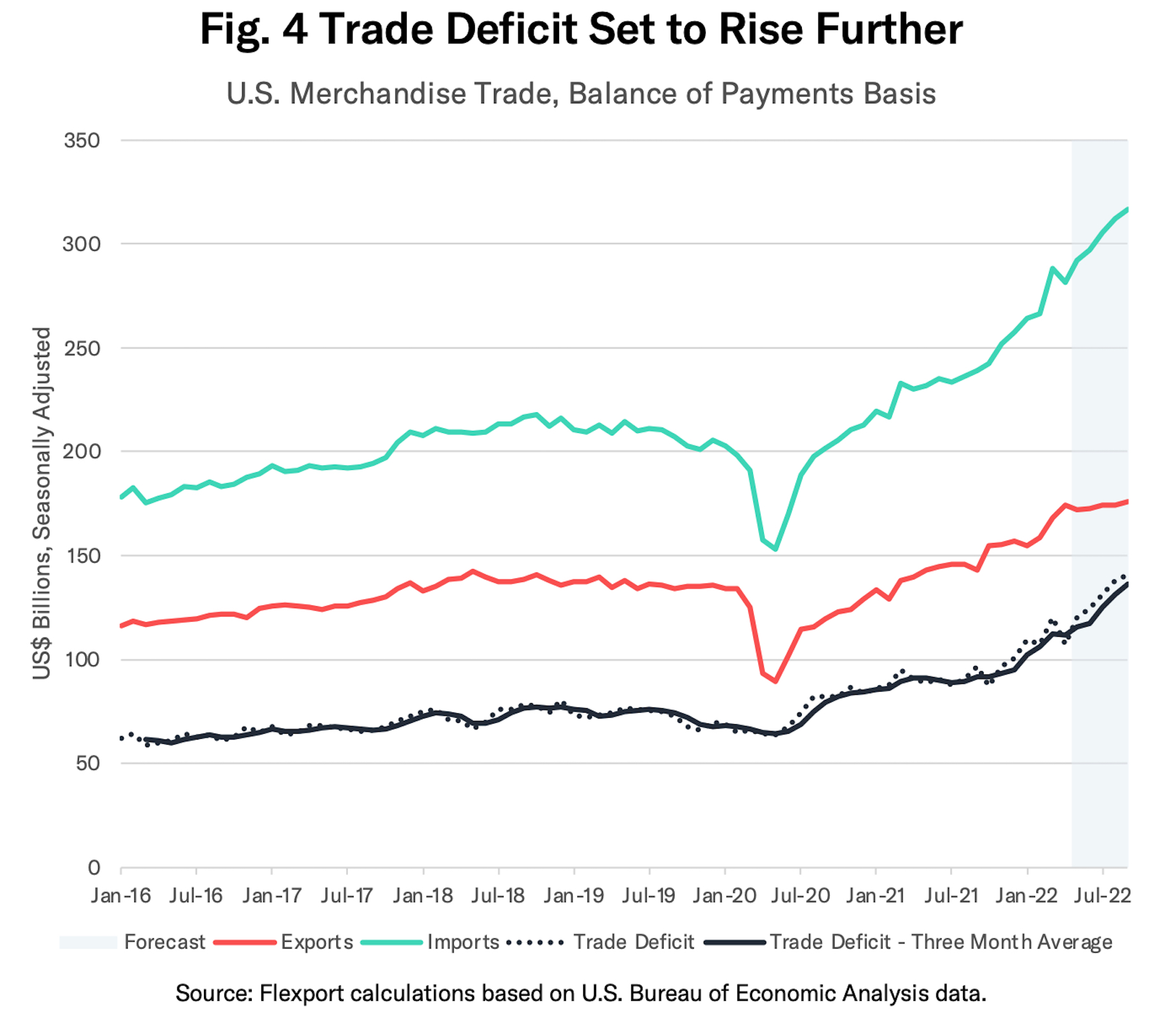 Flexport’s implied trade deficit estimate on a balance-of-payments, seasonally adjusted basis for May 2022 is $120 billion, with the figure expected to rise at least through September. For Q2’22 the deficit may rise to $352 billion from $337 billion in Q1’22.

In conclusion: Flexport’s data can provide a higher accuracy forecast for U.S. international trade than traditional economic models. Our initial forecast shows growth of 3.7% for imports in May 2022 versus April, while exports are expected to dip by 1.2% on a balance-of-payments, seasonally-adjusted basis.