This report looks at the state of retail inventories across the U.S. economy and in specific industries. The ratio of inventory to sales at the macroeconomic level is well below the long-term average, but that is largely due to the automotive sector. In some instances, including furniture and outdoor goods firms, corporate data for Q4’21 show the ratio is already above pre-pandemic levels.

The economy during the pandemic has featured a surge in consumer demand and a struggle among supply chain operators to meet that demand. This report looks at the inventory component of supply chains.

At the Macro Level, Inventories are Below Long-Term Averages

Inventory as a proportion of sales provides an indication of the adequacy of supply chains to keep up with demand. 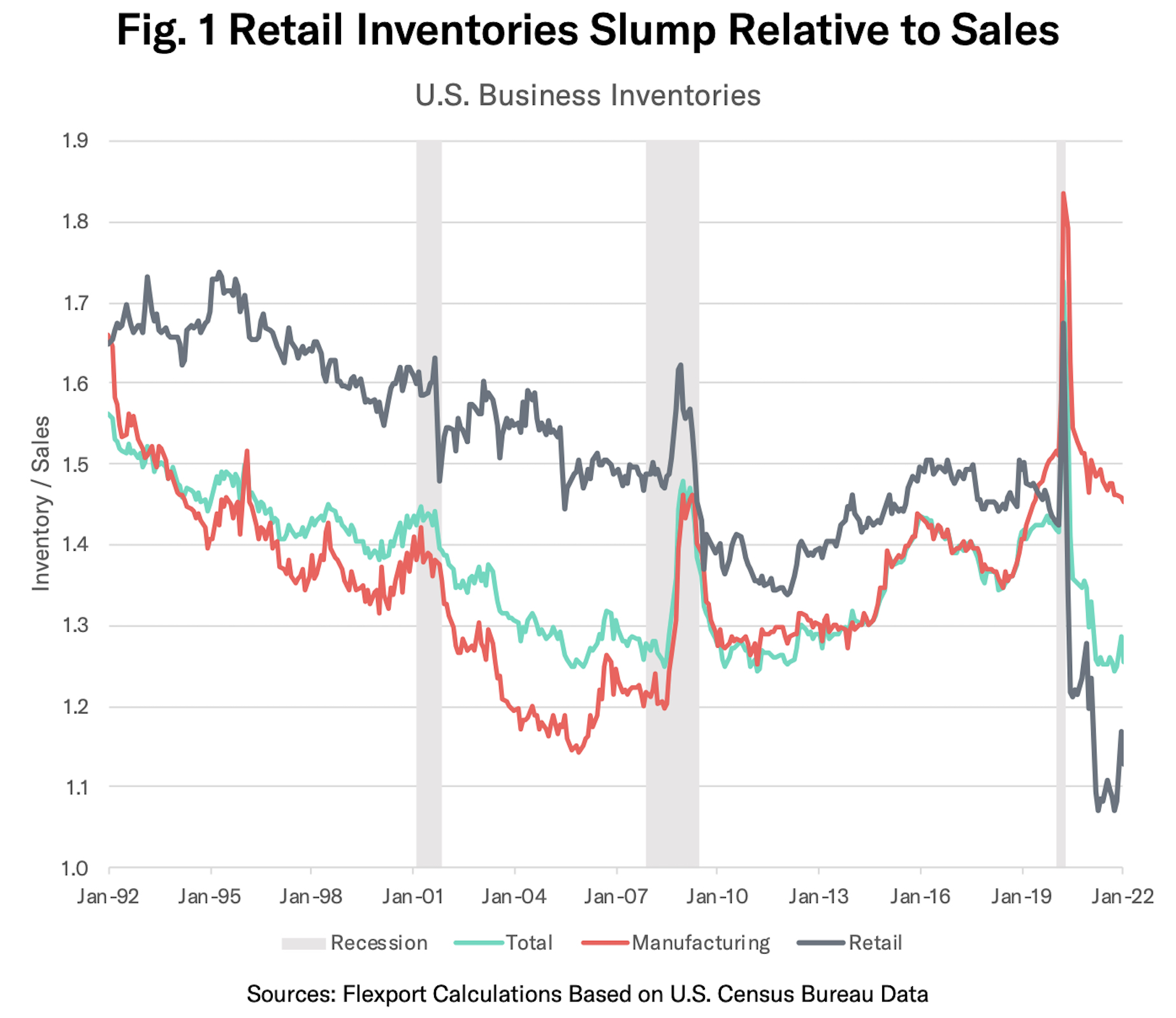 Over the past 30 years there have been three broad phases of development in U.S. corporate inventories. As shown in the chart above, inventory / sales, based on U.S. Census Bureau data, fell from the early 1990s until the global financial crisis (GFC) in 2008. That likely reflects the increased prevalence of just-in-time business strategies, particularly in manufacturing and wholesale. Retail inventories also declined but remained higher than those for manufacturing and wholesale (shown in “total”).

Following the GFC, inventories increased steadily during the 2010s, particularly for wholesale and manufacturing, and stabilized at levels seen in the late 1990s. Retail inventories, meanwhile, held at levels similar to the 2000s.

The advent of the COVID-19 pandemic in early 2020 led to upheaval in sales and inventories. A spike in inventory to sales, particularly for retail, occurred as a result of retail store closures. Subsequently, the ratio has collapsed as consumer demand has run ahead of faltering supply chains, as outlined in prior Flexport research.

The rebuilding of inventories, particularly for retail, is a potential driver for continued, elevated demand for logistics services.

The most recent data for retail inventories - including autos and food as well as retail stores - shows a ratio of 1.13x in January 2022. That compares to a level below 1.10x after logistics congestion became more serious in Q2’21 and an average in 2016 - 2019 of 1.47x. Manufacturing and wholesale inventories have shown little sign of increasing back to historic levels.

Some Retail Sectors Already Back to “Normal”

Looking in more detail at retail inventories, the picture varies significantly by sector. 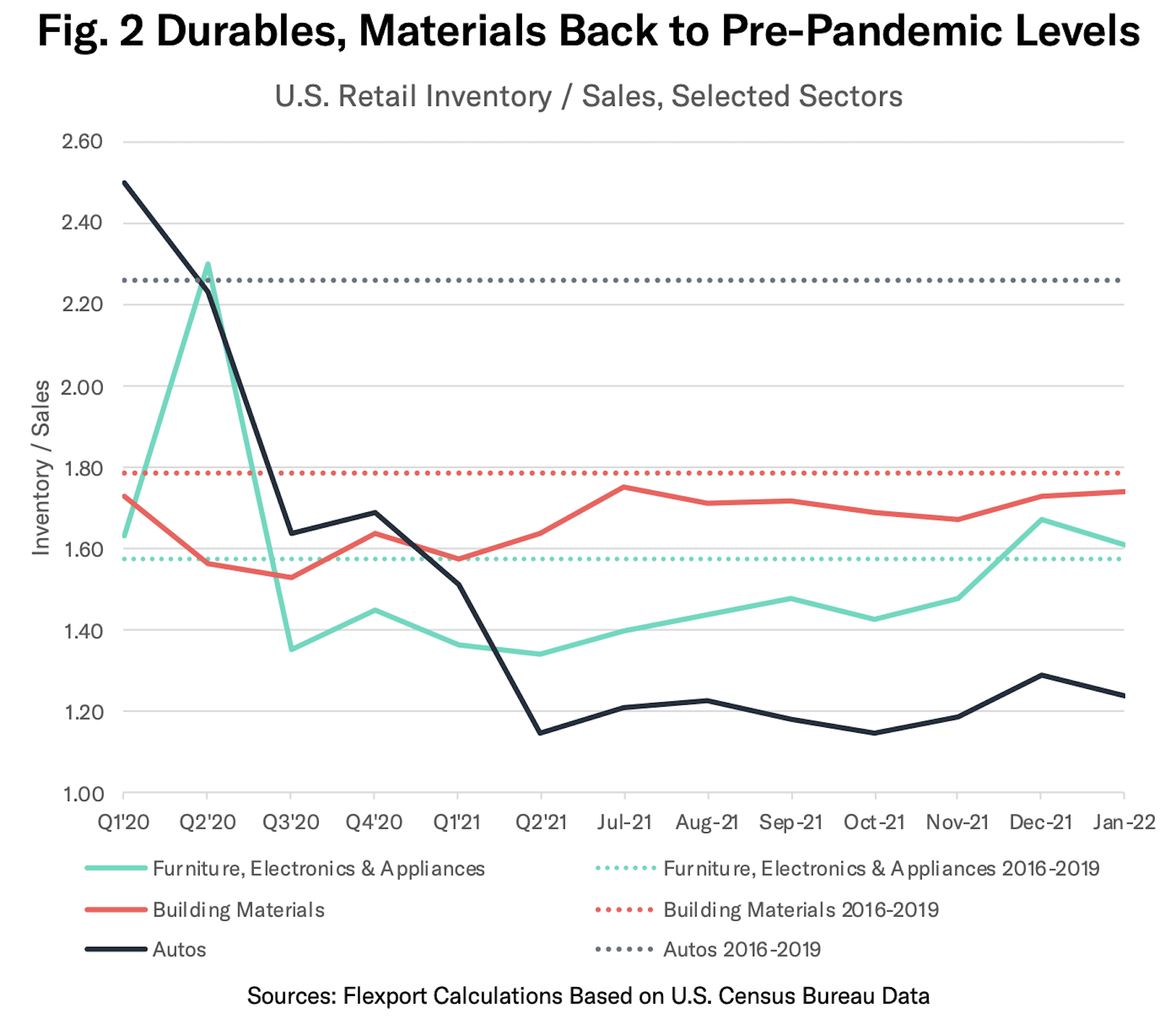 Similarly, building materials have increased to 1.74x in January, close to the 1.79x level before the pandemic. The recovery has taken longer than for consumer durables, from a trough of 1.53x in Q3’20 caused by increased spending on home improvements during lockdowns.

The automotive sector, by contrast, remains at just 1.24x despite a recovery from lows of 1.15x due to a shortage of supply chain components and remains well below the pre-pandemic average of 2.26x.

Put another way, much of the current shortfall in inventory / sales versus history seen across U.S. retail is largely due to the automotive and apparel industries. 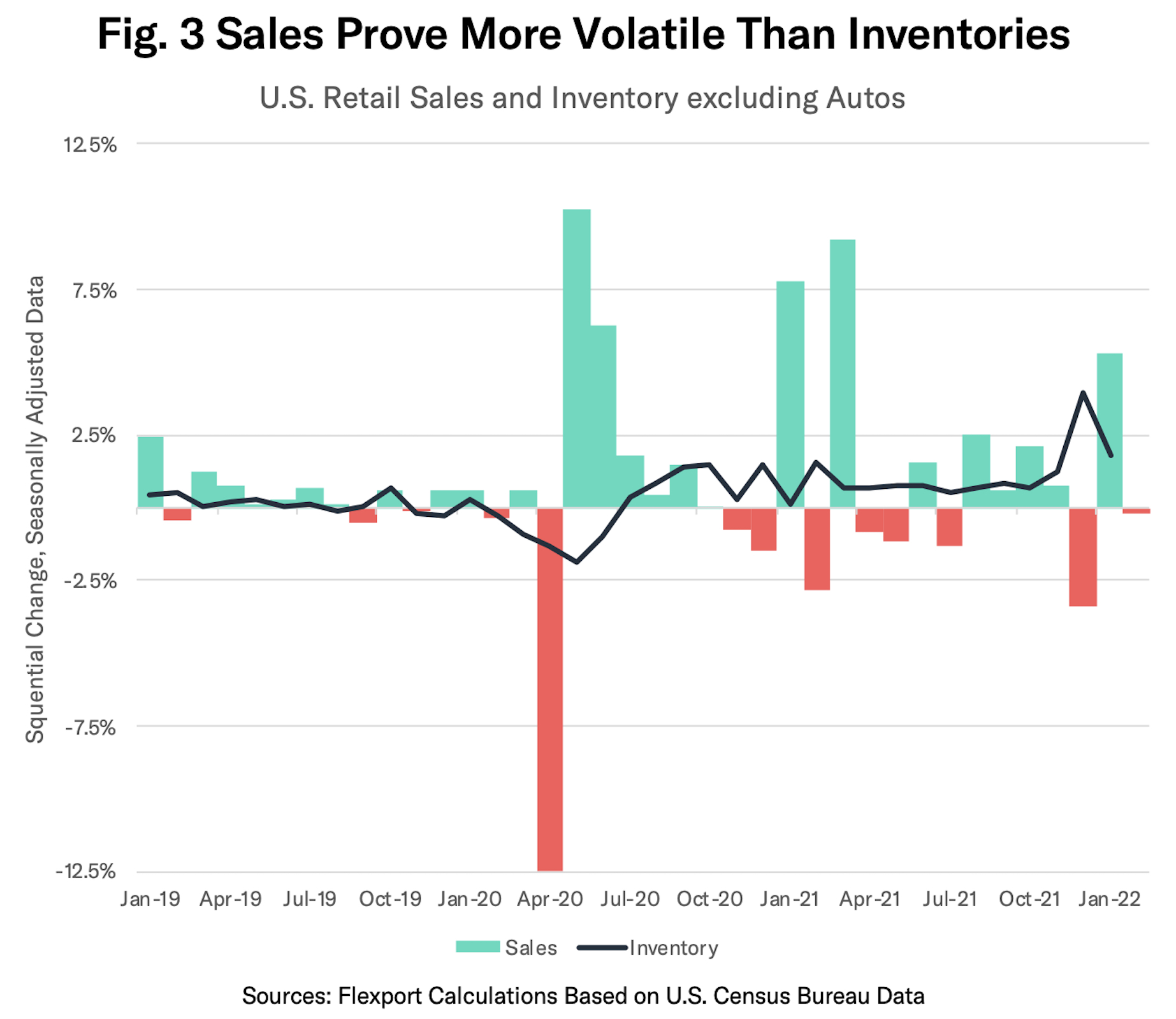 For reference, the expansion of the inventory / sales ratio has been driven by an expansion of inventories as well as a slowdown in sales growth, as shown in the chart above.

We have taken a deeper dive into the Furniture and Outdoor Goods retail sectors, which form components of the “furniture, electronics and appliances” segment referred to above. This is done using company financial data which will show inventory “in transit” as well as that already in warehouses. By nature that makes the information somewhat backward looking - firms have typically reported calendar Q4’21 figures as of mid-March 2022. 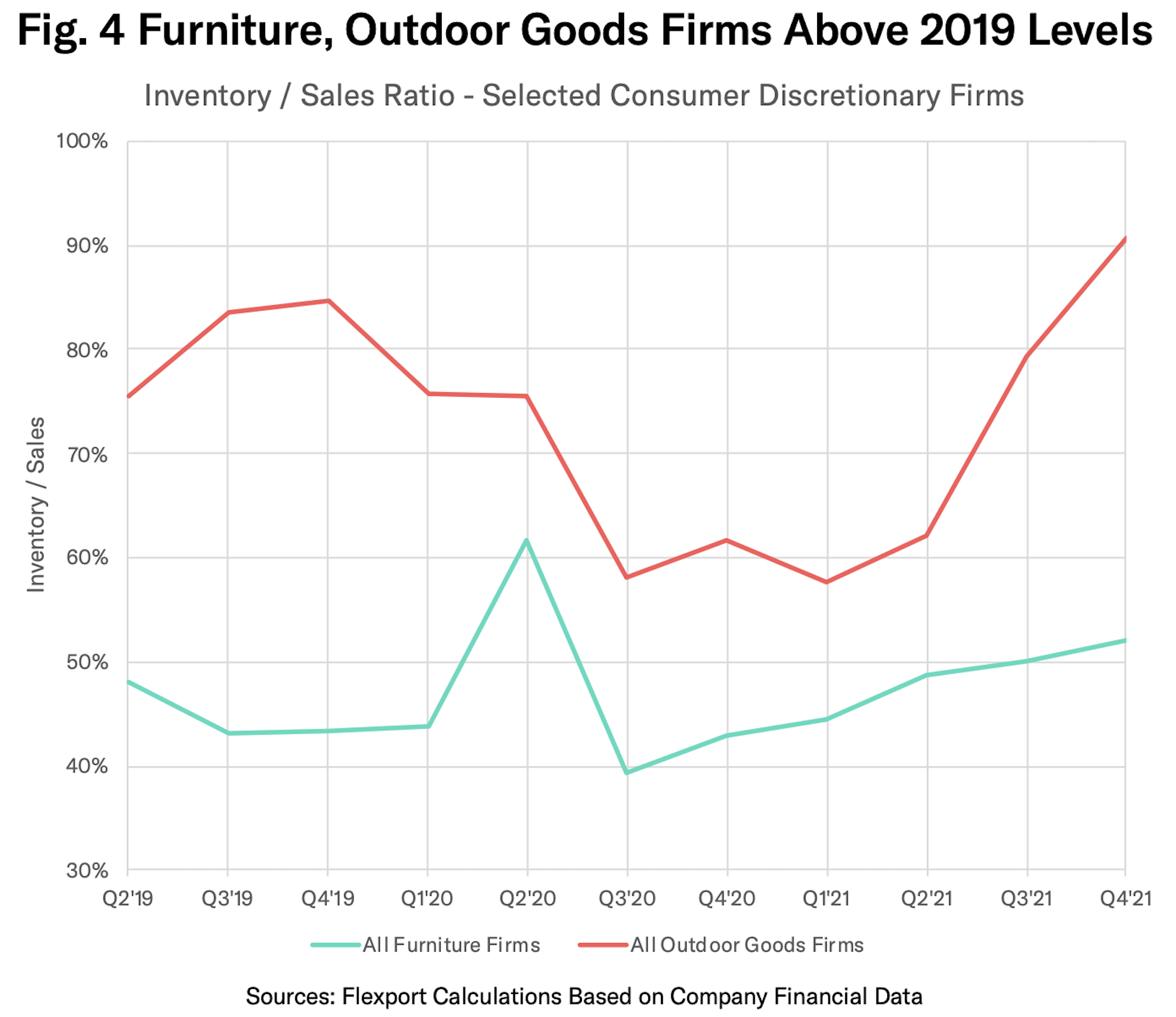 For the furniture industry, we sampled 14 companies across retail and manufacturing with easily identifiable operations and financials. The sample was based on Seeking Alpha’s definitions of furniture producers and retailers, from which we removed companies with unsuitable product mixes and those with a market capitalization below $50M.

The inventory / sales ratio for the group reached 52.2% in Q4’21. As shown in the chart above that compares to 50.1% in Q3’21 and 42.9% in Q4’20, suggesting inventory balances had already started accelerating. The peak in Q2’20 reflects a slump in sales linked to the closure of stores during the initial round of pandemic lockdowns.

It’s also worth noting that profitability (EBITDA / revenues) fell to 13.1% in Q4’21 from 16.1% in Q4’20, suggesting elevated costs (e.g. materials, labor and logistics) are eating into profitability.

In the case of outdoor goods firms, we sampled 16 companies across sporting goods, exercise equipment and personal weapons producers and retailers. The sample was based on Seeking Alpha’s definition of leisure products firms, from which we removed companies with unsuitable product mixes and those with a market capitalization below $50M.

The weighted average inventory / sales ratio across the outdoor goods group reached 90.7% in Q4’21 compared to 79.4% in Q3’21 and 61.6% in Q4’20. That was also above pre-pandemic levels, suggesting a significant rebuild of inventories and / or revenue growth below management’s expectations. For reference, the revenues of the group increased by 15.0% year over year in Q4’21, which was slower than the 21.4% rate in Q3’21.

It is worth bearing in mind for both sectors that sales have increased significantly during the pandemic, increasing the baseline need for inventories but also increasing the need for reduced inventories should sales recede. Adjusting for inflation, revenues among the outdoor goods firms were 58% higher in Q4’21 than in Q4’19 while for furniture firms real revenue growth was 15.9%.

In conclusion: The current shortfall in US inventory/sales versus history is largely due to the autos sector. For consumer durables (furniture, electricals, electronics) and building materials the ratio is close to pre-pandemic levels. An analysis of corporate financial data for furniture and outdoor goods firms confirms this trend was already in evidence in Q4’21.