Today, July 1, the official rework of the North American Free Trade Agreement, now known as the US Mexico Canada (USMCA), officially went into effect. Like most of what we’ve seen in the realm of trade agreements in the past couple years, it leaves uncertainty. And, it comes at a time when the rumblings of another possible trade war were already starting to sound.

At the beginning of the year, before the public was yet thinking about pandemic waves, there was a sense that a surging threat of trade protectionism had subsided. From early 2018 on, the threat of an abolished NAFTA hung in the air, along with new national security tariffs, tranche after tranche of tariffs on China, and new tariffs on European goods, with threats of more to come. Then, as 2019 turned into 2020, attention turned toward the COVID-19 pandemic and the trade protectionism seemed to calm, if not abate. 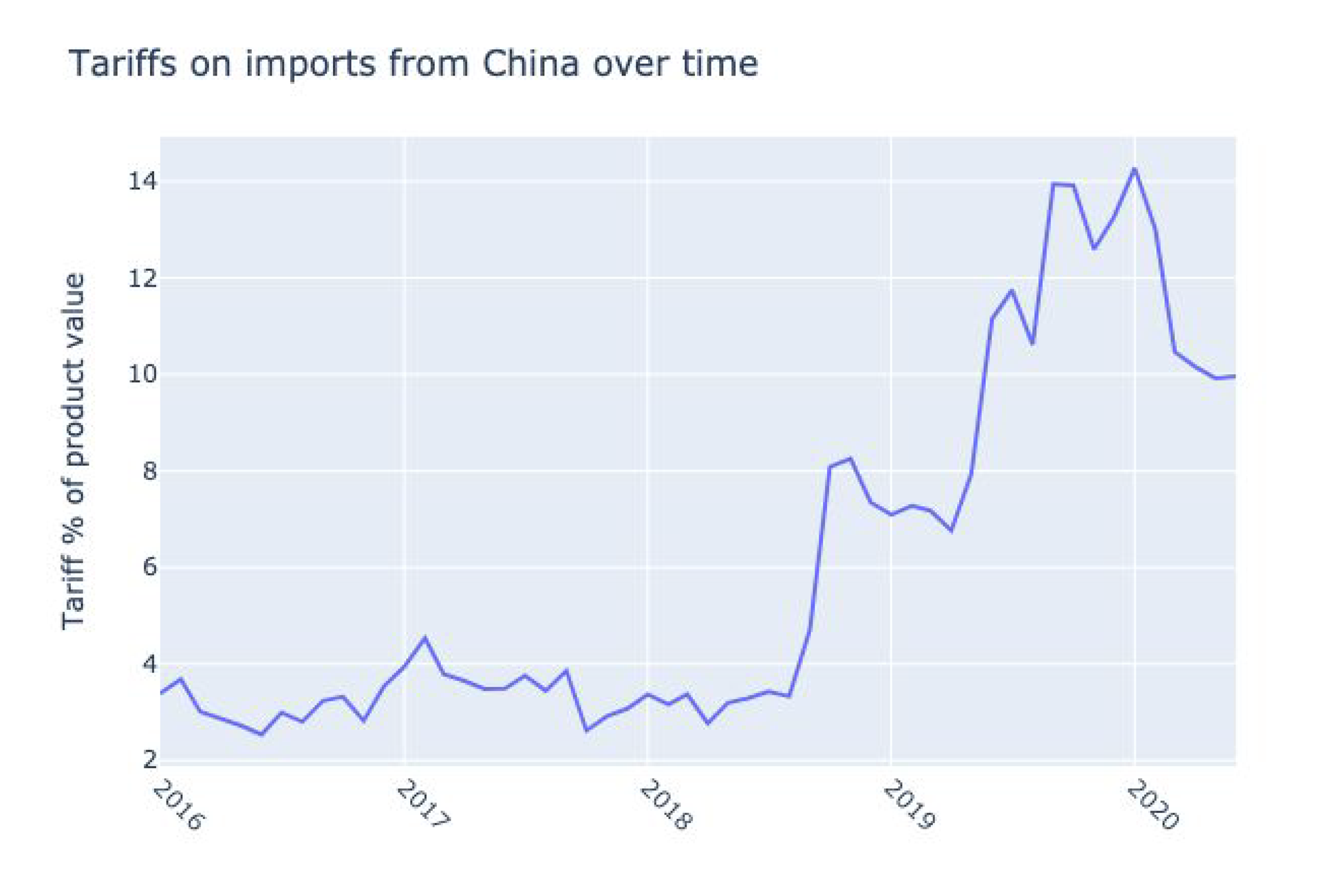 This chart shows tariffs paid by Flexport clients as share of the total value of imports into the US from China, peaking at 14.3% in January, before dropping to 9.9% in May. That drop can reflect either a lowering of tariffs or a shift in import mix from high- to low-tariff goods.

When the USMCA was signed and ready for implementation in January, it seemed more trade-restrictive than trade-liberalizing, but the danger of a North American breakdown seemed to have receded. And, as a “Phase One” tariff deal was struck with China that same month, the bulk of “Section 301” tariffs remained in place, forestalling some planned tariff hikes and appearing to offer a degree of stability in the US-China trade relationship.

With Europe, the United States had no shiny new deal. But in the Boeing-Airbus dispute, the US applied tariffs at a lower rate than it might have, and the Trump administration did not follow through on the most commercially significant threat—a “Section 232” national security tariff on automobiles and auto parts. In addition, with another potentially explosive issue—European taxation of US digital providers—there were ongoing talks under the OECD that seemed likely to defuse the issue.

At the start of the year, it seemed as though the worst threats of trade war had been set aside and things were settling down. And then along came a major global health crisis stirring up fresh economic tumult. Now, on top of that, we may very well be looking at a second wave of trade barriers. In the last week or two, all of the aforementioned tariff truces have been called into question.

With China, US Trade Representative Robert Lighthizer had just testified on Capitol Hill that the deal was going well and that there was little danger of a breakdown in US-China trade relations. Almost immediately, he was corrected by a presidential tweet, which said that the United States maintained the option of a complete decoupling from China. Adding to the confusion, top White House trade official Peter Navarro then said in an interview that the US-China trade deal was over, before another presidential correction and a Navarro retraction. The upshot: The Phase One deal remains in place, but with mounting uncertainty about how well it is working and how attached the administration is to it. If that were not sufficient to raise concerns, the Chinese government just issued a warning about policy “red lines” that, if crossed, could put the deal in doubt.

Moving to Canada, when US officials threatened new barriers to aluminum imports a month ago—and targeted July 1–the implementation date for the new USMCA, it was a bold move; steel and aluminum tariffs had been part of the first wave of protection and their removal had been a major Canadian concern in the USMCA talks. Usually, the lead-up to a new trade agreement is used to settle major outstanding issues between countries, when each has something over the others. Thus, it is rare to see such trade threats–with accompanying concerns about retaliation–bubble up in the midst of adoption ceremonies. Exacerbating the situation, of course, is the ongoing pandemic, which has caused monthly trade activity among the three USMCA countries to plummet to the lowest numbers in 10 years.

Swiveling to Europe, the United States announced potential new tariffs on $3.1 billion of imports from the EU and the UK—part of a long-running dispute between the United States and Europe over allegations of subsidies to Airbus and to Boeing. The new raft of tariffs seems to mark an end to partial US forbearance following a WTO decision in its favor. And as this is happening, the EU awaits a WTO ruling on its complaint, which may well permit substantial new EU tariffs on US exports. Adding fuel to the fire, the United States declared that it would leave the OECD digital tax talks and hit any country that imposed those taxes with tariffs.

In the midst of a persistent pandemic and extraordinary economic shocks, it is an exceedingly difficult time to deal with threats of trade policy breakdowns. Yet a second wave of tariffs may be looming nonetheless.

Businesses should prepare to revisit the tariff ambiguity they experienced before the Coronavirus outbreak. As my colleague Tom Gould, Flexport Vice President of Global Customs advises, now, more than ever, is the time for companies to be nimble and to focus on understanding the details of your supply chain—specifically through the data. Here’s his rundown of what organizations need to know to avoid being caught in the tariff war crossfire.

Companies that have an intimate understanding of all of the data on their imports and exports will be in the best position to make changes needed to avoid significant impact from new protectionist measures.