Let’s start with a chart. This week, it's US Personal Income, Transfers, and Savings. 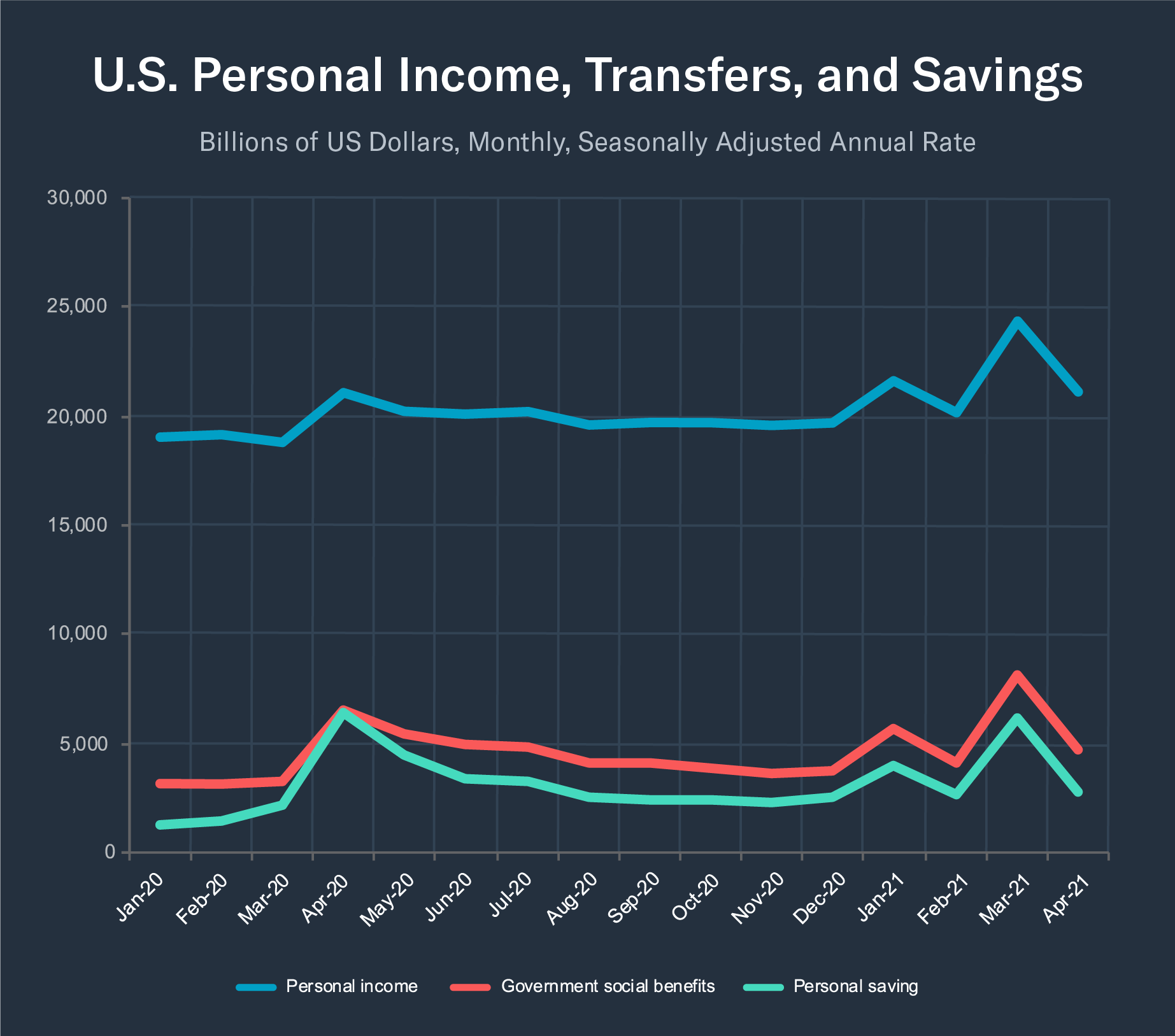 While it’s not the official definition of a recession, the rule of thumb is two or more consecutive quarters of contracting GDP. We can also, generally, equate national output (GDP) with national income. And the Covid-19 recession start date has been officially set as February 2020. So looking over this time period, one might expect to see a fall in income.

But personal income did not noticeably fall. While personal income (the blue line) dipped by 1.8% from February to March 2020, the ensuing months never showed a personal income level below that of February 2020. This is important because many of our common presumptions about what will happen in a recession—such as a fall in consumer demand—are predicated on a drop in income.

April 2021 data, released this past week, described a striking 13.1% drop in personal income. But as the chart shows, this just partially offset the spurt in March; April income was still above February. The red line, which depicts “government social benefits to persons,” shows how much volatility in income has been driven by fiscal transfers.

The final point to note from the chart is that, from April 2020 on, the level of personal saving (green line) was between 63% and 362% above its level in February 2020. That suggests that consumers have pent-up ability to spend.

April inflation measures in the US showed rising prices, however you cut it. Among the ways to cut it, one could look at the one-month price rise in a Personal Consumption Expenditure (PCE) index and extrapolate it to a full year.

That showed 7.5% inflation for the full index, 8.3% for a core version (excluding food and energy) and 2.4% for a “trimmed means” version favored by the Fed.

If one extrapolated the last six months instead, the corresponding rates would be 4.3%, 3.4%, and 1.8%. All but the last exceeded the Fed’s target for a 2% average.

Germany reported May inflation at a 2.4% annual rate, above the European Central Bank’s target of 2%.

Personal consumption did not keep up with inflation in April, falling 0.1% in real terms.

Each category was still up from February.

US Exports Rise in April

There is nothing novel about countervailing duty investigations; they are meant to offset subsidies. The novelty of a decision against Vietnamese tires last week was that it treated currency undervaluation as a countervailable subsidy.

Eligible subsidies are supposed to be “specific” to a particular industry, which had previously been interpreted as excluding currency measures.