Let’s start with a chart. This week, it’s Measures of US Inflation.

The Federal Reserve Board announced this past week that it would stick with its aggressively stimulative monetary policy “until substantial further progress has been made toward the (Fed’s) maximum employment and price stability goals.”

While April employment numbers are due this coming Friday, this past week saw the release of some price indices that may give an idea about what is happening with price stability (inflation).

The chart shows four different measures over the last two years, mixing quarterly and monthly numbers. Each uses prices from a different basket of goods. 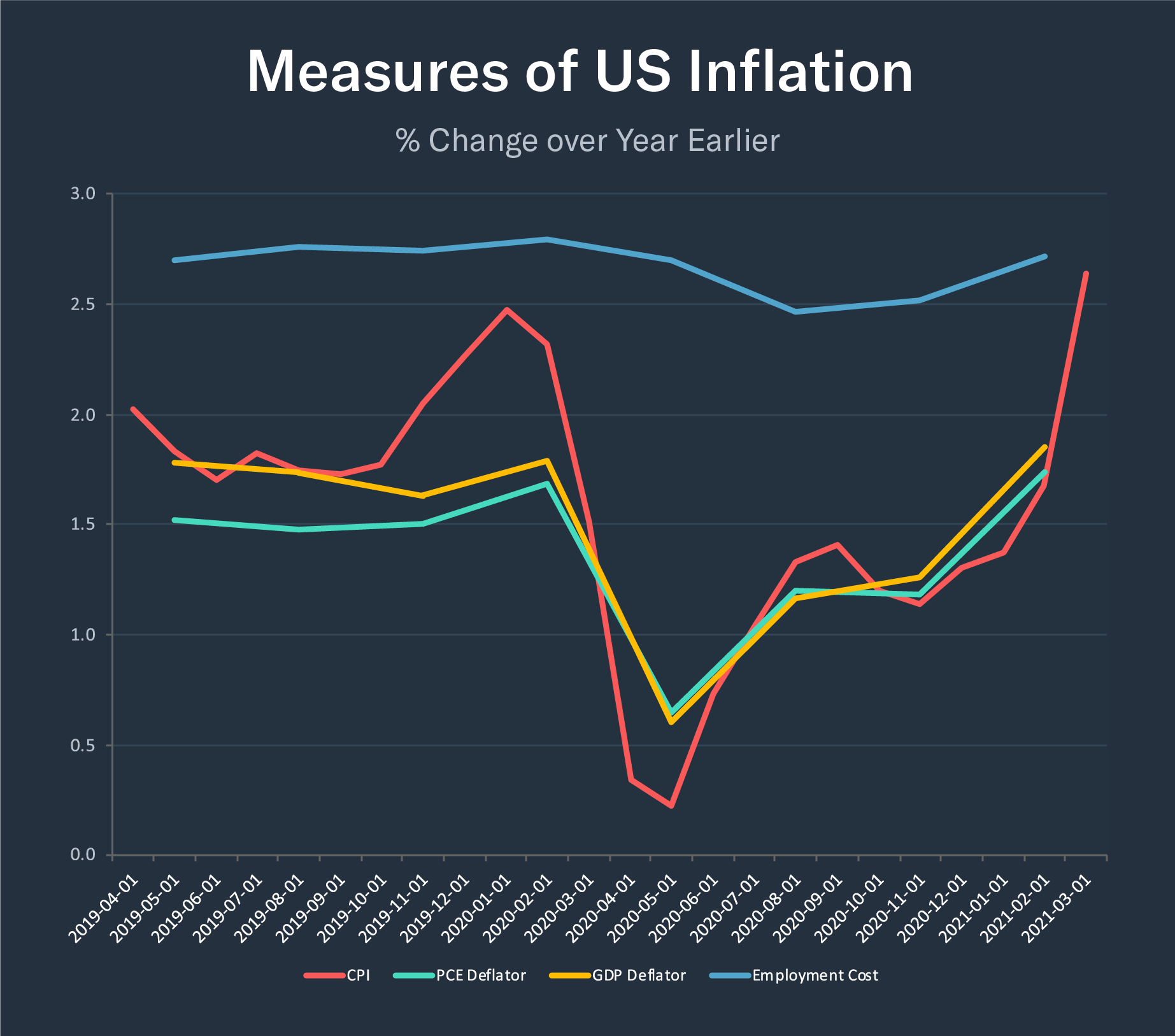 Consumer Prices for urban consumers (CPI, red) were up 2.6% in March over a year earlier. One can also get a reading on inflation through the price deflators used to calculate key figures, like real Gross Domestic Product or Personal Consumption Expenditures.

One concern of those who worry about inflation, however, is that price pressures will get channeled first toward other markets (not shown). Compared to a year earlier, the Case Shiller National Home Price index was up 12% (in February), the same as the Producer Price Index for all commodities (12% in March). Last week, the S&P 500 stock index closed up 47% over its level a year before.

The US economy expanded at a 6.4% annual rate in Q1 of 2021 (a 1.6% quarterly rate). The increase was largely driven by personal consumption expenditures of goods, up a seasonally-adjusted 5.4% (quarterly rate) over Q4, with durables (9.0%) continuing to outpace nondurables (3.4%).

Also in Q1, GDP for the EU fell 1.7% at a quarterly rate (-6.6% annual rate). All large EU economies saw their GDP fall except for France.

US personal income jumped by 21.1% in March, following a 7.0% drop in February. The wild swings are almost entirely due to government payments.

Looking over the past 8 months, excluding those payments, personal income has averaged $14.0 trillion (annual rate), rising and falling within 0.9% of that level. Government payments averaged $4.7t, but swung from $3.7t to $8.2t.

Individuals have smoothed their consumption over these income swings, as monthly personal savings rates have ranged between 12.5% and 27.6% (March), highly correlated with government payments.

An EU-UK agreement on goods trade had been operating provisionally since January. The UK’s implementation of the agreement has been contentious with France threatening to take action against UK services over a fishing rights dispute.