Sanctions 101 - How Matters as Much as Why

How do sanctions work? Are they effective and why have they become such a popular foreign policy tool? This report provides an overview of our recent State of Trade webinar which looked at the history and effectiveness of sanctions.

Flexport’s State of Trade Webinar held on March 23, 2022 dived into the history and effectiveness of sanctions as well as their application against Russia during the Ukraine conflict. This report, the first of two, provides key data from the webinar as well as a precis of commentary from the speakers, Prof. Daniel Drezner of Tufts University and Flexport’s Chris Rogers and covers the history and effectiveness of sanctions. A second report will cover the application of sanctions during the conflict in Ukraine.

What are sanctions, and how do they work?

We can group available sanctions approaches into five categories that governments can apply either independently or via multilateral groups such as the G7 or United Nations.

Comprehensive trade embargoes cover the entirety of a country’s international trade activities. The approach was widely used in the past but has become less popular since the latter part of the 20th Century.

Instead, sectoral sanctions focused on specific elements of the economy have become more commonly used. Typically they are aimed at a specific product or a vital export sector, or indeed a required import sector.

A further level of subdivision comes from smart, or targeted, sanctions which apply restrictions to trade activity with specific entities, be they corporations of individuals.

Financial sanctions limit a wide range of financing activities and not just those associated with international trade. These have become more widely used as a result of the dominance of the U.S. dollar and the SWIFT information exchange network. Non-SWIFT payments are possible but complex while countries that have set up their own payments system have not benefited from the same network effects. Central banks can also be targeted with financial sanctions.

Secondary sanctions involve applying sanctions against third parties that are not in the country whose behavior is specifically targeted. For example, the U.S. targeted several western European countries in the 1980s for financing a Soviet Union gas export pipeline.

It is also worth noting that sanctions can generate a precautionary approach from global firms that aren’t specifically covered by either primary or secondary sanctions, which can be seen in the actions by Chinese banks with regards to Russian counterparties.

Embargoes and Blockades - Sanctions Through History

Are sanctions a new thing and have they worked in the past?

Sanctions have been used in various forms for centuries. In the mid 20th Century, comprehensive sanctions were used as part of wider international conflicts, including by the U.K. and France against Germany, the League of Nations against Italy (over Ethiopia), and the U.S. regarding oil supplies to Japan.

During the Cold War, sanctions moved to strategic embargoes rather than full trade bans. The Coordinating Committee for Multilateral Export Controls (CoCom) including NATO, Japan and Sweden among others sought to restrict exports of specific products with military dual use to the Soviet Union.

Sanctions have also been used in more isolated cases, including by the U.S. against the U.K. in relation to the Suez Crisis, on a multilateral basis against South Africa during the apartheid period, by the U.S. and others in connection to Iraq’s invasion of Kuwait; and against Iran’s nuclear weapons program.

Over time there’s been a steady evolution away from comprehensive sanctions towards more targeted measures, the idea being to narrowly target ruling classes / elites with restrictions on arms sales, travel bans, financial restrictions and even luxury goods exports rather than damage the economy and population at large.

Sanctions Have Become the First Resort 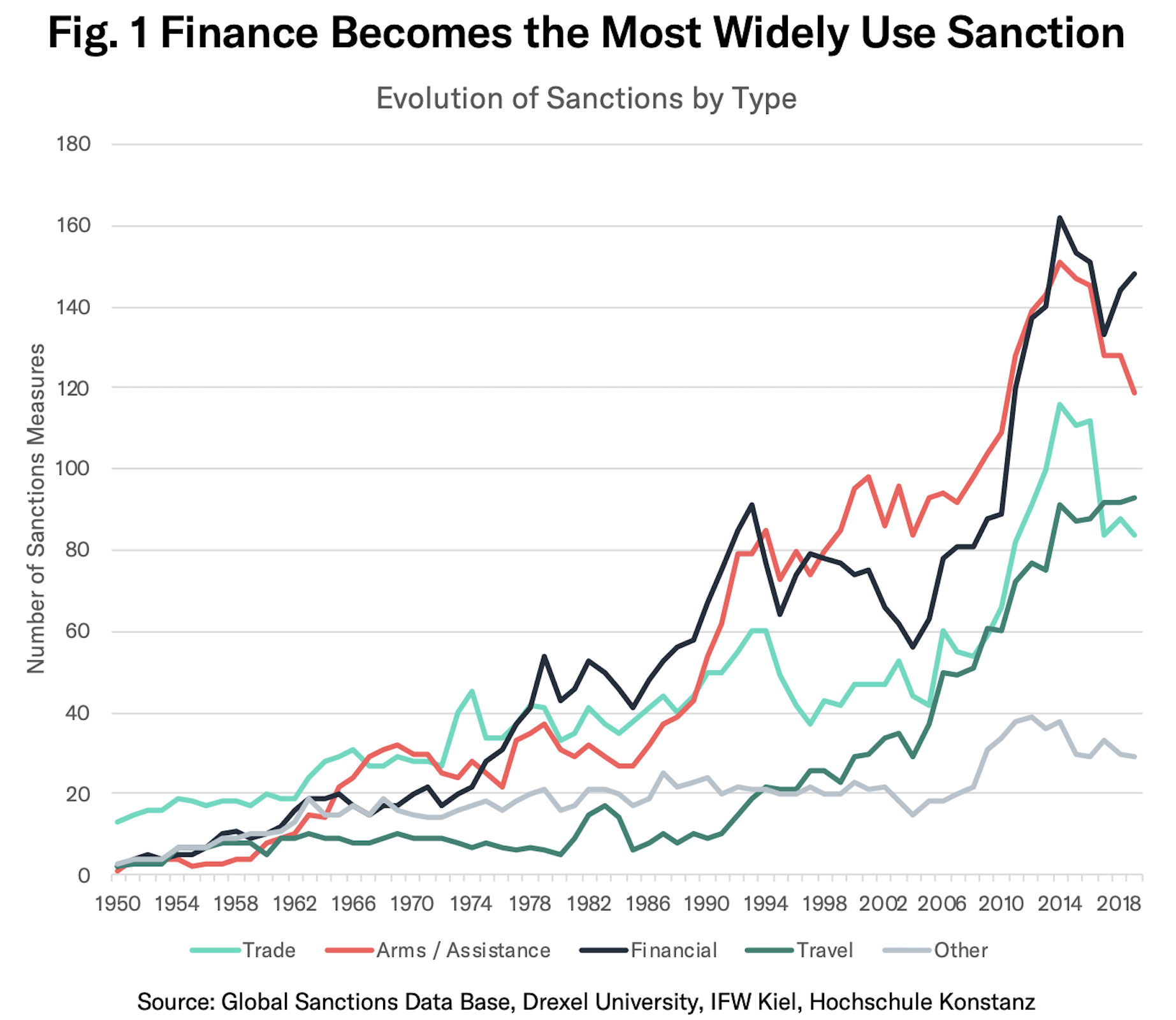 As shown in Figure 1 above, financial sanctions overtook arms / assistance as the most common form of active sanction while travel bans exceeded import / export restrictions.

Financial sanctions have become more popular for the U.S. as the country sits at the epicenter of global capital markets while the dollar’s position as a reserve currency reduces the costs of applying sanctions to American citizens. Financial sanctions can work as a force multiplier, given global banks are keen to avoid fines and reputational damage from working with sanctioned entities.

Other factors that can affect success include: the nature of demands being made, e.g. giving up territory won in conflict vs. ending a weapons program; the democratic nature of the target; and whether there are expectations of future conflict.

Sanctions often serve multiple purposes, though occasionally it is not clear what specific outcomes countries hope their sanctions will achieve. A common use is compellence or coercion to a specific policy aim - e.g. improving human rights or ending a conflict.

Deterrence is another use, for example sanctions against one country for a specific activity may lead other countries to reconsider their actions, for example in nuclear non-proliferation or antiterrorism.

Success in sanctions occured in between one third and one half of cases according to analyses by the Peterson Institute and the TIES Project, with variability depending on definition of success and whether sanctions were applied or only threatened.

In conclusion: Sanctions have become an increasingly popular tool of foreign policy. Their effectiveness depends on them being correctly targeted and multilateral in nature.

Footnote: Sanctions data from The Global Sanctions Data Base: