The current market environment in ocean freight is incredibly taxing for shippers. Freight prices are at all-time highs, levels that jeopardize the very viability of lower margin businesses. Emotions are running high throughout the industry.

And when there are problems, people often look for a villain to blame. Many are blaming ocean carriers for the current situation where there isn’t enough capacity and market prices are reaching all-time highs.

To blame the carriers is simplistic and wrong. The fact is that carriers have deployed more ships than at any time in human history—in the midst of crew shortages caused by the pandemic, persistent cyberattacks, increasing environmental regulations, and all manner of other operational challenges that outsiders can hardly imagine.

Ocean carriers have deployed all available capacity, including ships that are not even designed to carry containers, but the effective capacity is 25% less than what’s actually deployed, because so many vessels are caught up in record bottlenecks at ports.

Ocean carriers just went through a decade of hell with rates below their full cost. During the last decade, they lost billions of dollars, and many were forced to take out usurious loans while staring in the face of competitive takeover, nationalization, or bankruptcy. Their very survival was at risk during a decade in which freight forwarders did just fine, while shippers enjoyed the cheapest freight prices in the history of humankind.

Now that rates have spiked, it’s easy to blame carriers. But complex problems rarely have simple solutions, and almost never have a single entity to blame. We co-create our problems.

Today’s situation is comparable to a rush hour on Monday morning: It’s everyone’s problem. Global demand has peaked, and capacity is not sufficient to deal with it. This is exacerbated by the fact that one fourth of all vessels are waiting in queues at the ports.

As a global logistics industry, we’re all in this together to try to dig out: shippers, forwarders, ports, carriers, and technology platforms each play a vital role in the ecosystem and must work collaboratively to create solutions to our problems. 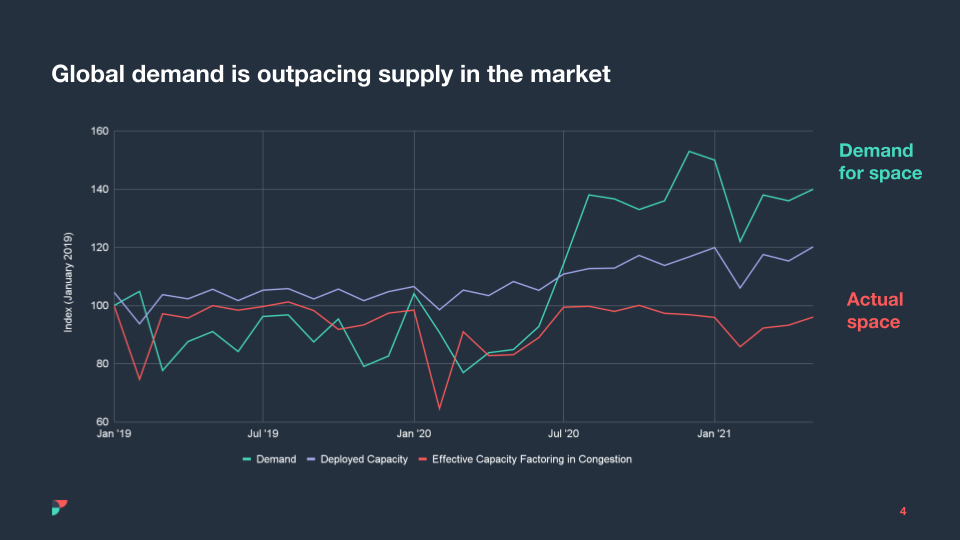 Ocean carriers deserve to earn a healthy return on their assets. The industry is better when asset owners can make money to maintain their fleets, pay their workers, upgrade capacity, and invest in technology. Over the last decade, market conditions forced many carriers to make tough decisions about which of these vital functions to postpone.

It’s fine to dislike the high prices—certainly as a shipper, this is hurting a shipper’s business, and they are right to hate it. But to blame the carriers, or act as if they are doing something wrong by charging market prices, fundamentally misunderstands the role markets play in the modern world.

The economy is far healthier when prices are allowed to rise in accordance with the laws of supply and demand. Those higher prices then serve as a signal for companies to both deploy their assets and invest in new capacity. Carriers are doing this and have leased every available vessel out there. Their fleets are fully deployed, with many re-routing ships to lanes with the largest supply and demand imbalances, and they are placing new orders. That is the role of prices in a free market economy.

To vilify carriers in this environment is not only to fail to understand the natural boom and bust cycle of asset-intensive industries—and to undervalue the vital role ocean carriers play in the ecosystem—but it is also to advocate against the free market price mechanism itself.

And an argument against market-based pricing driven by supply and demand is an implicit endorsement of price controls which can only be led by the government. This is not a new idea, it has been tried in nearly every corner of the earth, in almost every industry, almost since the dawn of human history. Always and inevitably, wherever price controls are implemented, the result is an increase in human misery and a decrease in the freedom upon which the prosperity of the modern age has been built.

So what can shippers do, since blaming carriers is decidedly not the answer?

The simplest solution is to make sure you’re fully loading every container. Flexport’s machine learning technology digitizes packing lists including all the dimensions of the cartons inside our containers. What we see is that across all the full containers we ship for our clients, they are on average only ~70% full. The carriers might not be able to fit more containers on their ships, but shippers can fit a lot more inventory in their containers if they pack them smartly!

Consider splitting full containers into less than container load freight, where there is often untapped capacity. Perhaps most importantly, as you load your containers, make sure you’re prioritizing your highest value SKUs.

Finally, be patient. It’s hard to predict when we will be “back to normal,” if such a concept even exists in the ocean freight industry. This is hard to predict, but as consumers restore pre-pandemic purchasing behaviors, volumes of imported goods are likely to diminish, and help us out of this situation. Secondly, the capacity locked up in traffic right now will free up when there are no further setbacks like we have seen with Suez or currently in Yantian.

One thing to keep in mind however, is that just like in a traffic jam on a freeway, it’s not enough to restore normal flow for the jam to go away: Once there is a jam, flow must go below normal levels for the jam to resolve itself. So this will take time, and with the coming peak season, it may be a while. So again, we must be patient and resilient.

Finally, in the long term, governments and industry players must make significant investments in port, rail and vessel capacity along with deploying supply chain technology to make global logistics more resilient against these types of shocks.