Ocean and air freight rates and trends; customs and trade industry news plus Covid-19 impacts for the week of May 24, 2022. 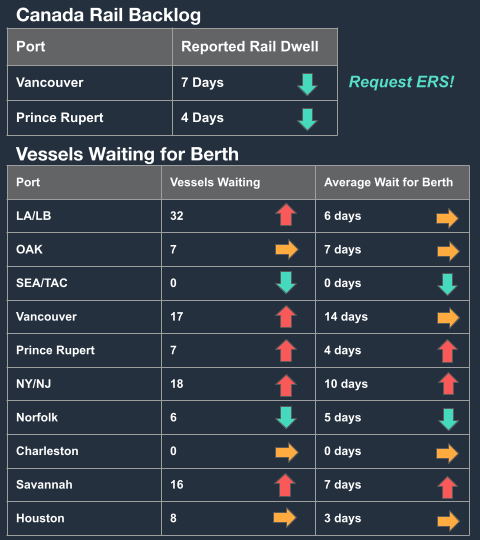 Transit times may be a better metric than the number of ships queued at port. A new report published jointly by Windward and Sea-Intelligence (as reported by The Loadstar) indicats that port congestion may not be the best metric to track for an overall view of the state of ocean freight. Rather, the study authors suggest watching total transit time as this takes into account additional factors and tactics being employed by streamlines to help avoid sitting idle offshore.

U.S. parcel volumes continue their upward trend. Freightwaves reports on a new study by Pitney Bowles that tracks the growing volume of parcels being handled nationwide. While the big 4 continue to dominate (UPS, FedEx, USPS, Amazon) there is also a trend for retailers looking to diversify their carrier base by expanding partnerships with the growing number of smaller 3PLs entering the market.

Air Timeliness Indicator The Air Timeliness Indicator measures the amount of time taken to move airfreight along two major trade lanes from the point of consolidation to arrival at final destination. The latest indicator saw the Transpacific Eastbound lane (TPEB) remain unchanged at 11.4 days for the four weeks leading to May 22. For the Far-East Westbound lane (FEWB), there was only a small decrease to 10.8 days. Air times may reflect seasonal shifts working their way out of the system as importers switch to summer goods.

Ocean Timeliness Indicator The Ocean Timeliness Indicator similarly measures transit time for ocean freight along the same two trade lanes. In the past week, the TPEB fell to 102 days, reaching the lowest since November levels following a decline from seasonal highs. The FEWB fell by 3 days to 105 days, likely as the result of improved cargo-ready to origin port departure times.