In Focus - Consumer Malaise is a Transatlantic Phenomenon 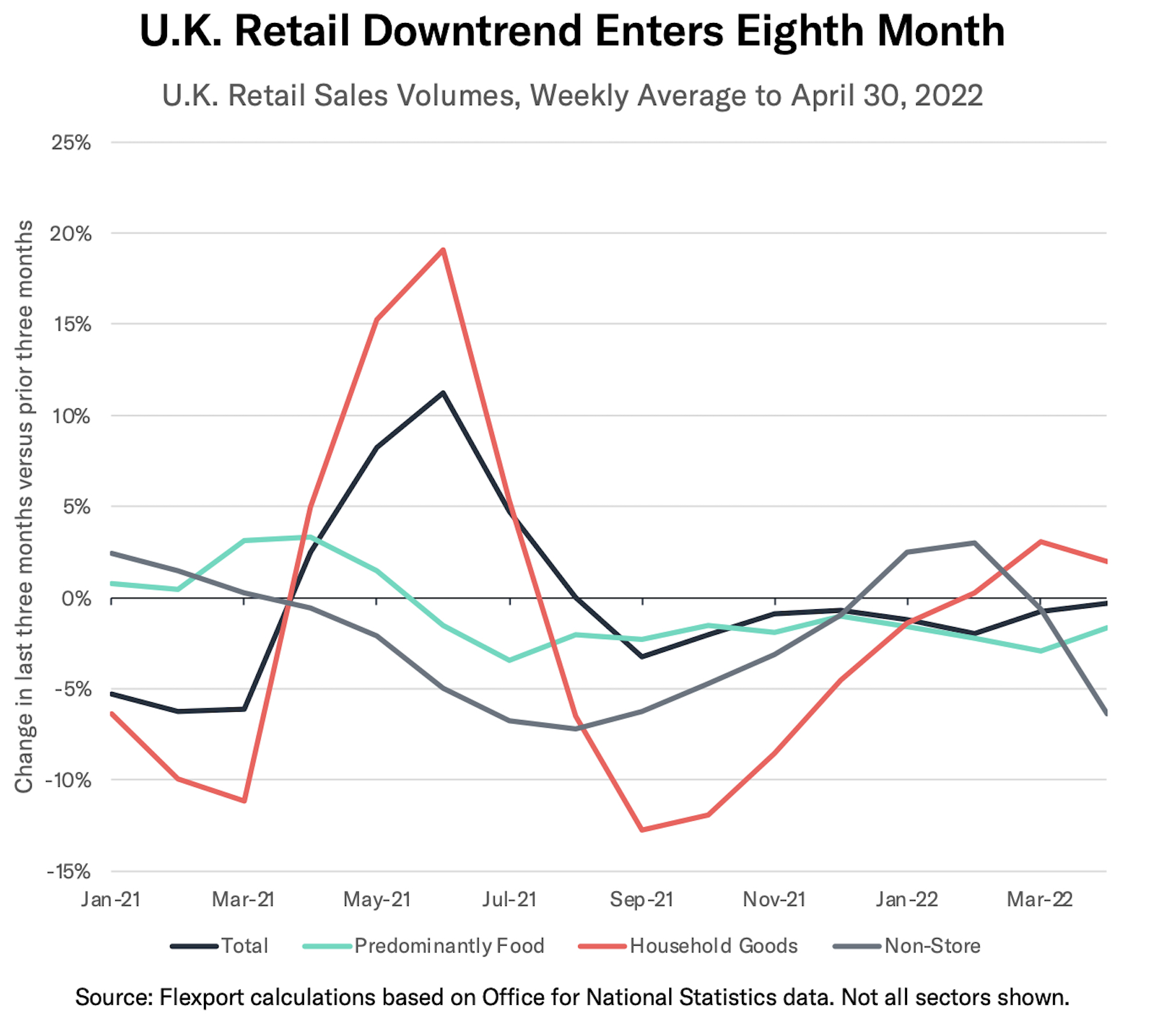 Stock markets have been roiled this week by weaker-than-expected sales by U.S. retail firms. Rising inflation has led consumers to cut their spending on discretionary goods. Is this just a U.S. phenomenon?

Sadly not. Annual consumer price inflation (CPI) in the United Kingdom reached 9.0% in April, the fastest rate of price increases since the series was instituted in 1988. The Retail Price Index (a simple, not geometric average that is more susceptible to shifts in commodities) reached its highest since August 1981.

The Bank of England has warned that inflation could rise to 10% before the end of 2022, leading it to start tightening monetary policy by raising its benchmark borrowing rate to 1.0%. That already led borrowing costs higher with mortgage rates in April reaching 2.4% compared to 1.6% in January (most U.K. mortgages are floating-rate).

Wages, meanwhile, have only increased by 4.0% in the past 12 months. The resulting drop in real disposable incomes has dragged GfK’s consumer confidence level to its lowest since the survey began in 1974. That includes a slide in purchasing intent for large items.

As a result, retail sales published this week showed a 0.3% dip in weekly volumes sold in the three months to April 30 versus the prior three month period to Jan. 31 (the Office for National Statistics’ preferred trend measure) as shown in the chart above. That continued an eight-month downward trend established in September 2021.

Sales by online retailers fell by 6.4% on a trend basis, while food stores declined by 1.7%. The latter may reflect the impact of higher food costs. Household goods stores (durables such as appliances and furniture) increased by 2.0%, though that may reflect the completion of purchases that had been held up by logistics challenges.

Still, at least Queen Elizabeth II’s Platinum Jubilee on June 2 gives consumers a reason to celebrate - with a remarkably complex dessert - before tightening their belts further.

(The Weekly Economic Report will be published on Tuesday next week as we’ll be observing Memorial Day on May 30.)

In other research we’ve published a guide to U.S Section 301 duties on imports from China, including their history, impact on trade flows and potential actions by the Biden administration to address inflation.

Preliminary U.S. retail sales data showed a slowdown in growth to 0.9% sequentially in April compared to 2.4% on average in Q1’22. That partly reflects lower gasoline prices in April though excluding fuel and motor vehicles still showed growth of 0.3% in April versus 2.5% in Q1. It should be noted though that these figures are nominal and CPI was 0.3% in April.

U.S. Industrial Production increased by 1.1% sequentially in April and by 6.4% year over year. Growth was led by production of business equipment (up 8.8% year over year) while consumer goods manufacturing only improved by 4.4%. A recovery in automotive manufacturing was a major driver of the improvement.

U.S. housing market data showed a weakening from March to April, but strength relative to 2021. In seasonally-adjusted terms, housing starts fell 0.2% from month to month, but were up 14.6% from April 2021. Building permits were down 3.2% for the month but up 3.1% year over year.

Consumer price inflation (HICP) in the EU reached 8.1% year over year in April, up from 7.8% in March. Rising energy and food prices were the major contributors and likely reflect ongoing disruptions from the conflict in Ukraine (see more below).

Japanese GDP fell by 0.2% sequentially and by 1.0% on an annualized basis in Q1’22. Private consumption was unchanged sequentially while government spending rose. Export growth of 1.1% was offset by soaring imports during Q1.

The European Commission has outlined a plan to cut all imports of Russian oil and gas by 2027 as well as deliver environmental commitments through a mixture of energy savings, investment in renewables and importing of fossil fuels from alternative sources.

The European Commission’s roadmap also includes a potential cap for natural gas market prices in the event that supplies from Russia are disrupted. To reduce the risk of disruptions the EU has ruled that suppliers are allowed to pay using euro or dollar bank accounts in Russia, but not with rubles from international accounts.

The EU and U.S. meanwhile have carried out a new round of Trade & Technology Council talks which have included an agreement to limit competition in offering subsidies for onshoring semiconductor manufacturing.

A survey of British firms’ reshoring intentions shows around 40% of manufacturers have increased their sourcing from U.K. firms in the past two years with Brexit and slowing global logistics cited as major reasons. A similar number of firms expect to increase U.K. sourcing in the next two years too.

The Ukraine conflict has also caused significant upheaval and inflation for global food supply chains. That led the G7 to propose alternative routes for exporting wheat from Ukraine. That comes as India has announced a ban on exports of wheat, with isolated exceptions.

The Biden administration has triggered the Defense Production Act to boost the availability of infant formula. That includes a requirement for U.S. manufacturers to focus on the U.S. market - with negative consequences for Canada - and will include the U.S. military flying in supplies. The FDA will also relax import rules. Corporations are already acting with the increasing use of airfreight to bring product in from overseas and scaling up production in the U.S..

Chart of the Week - Like a Rock, in a Bad Way 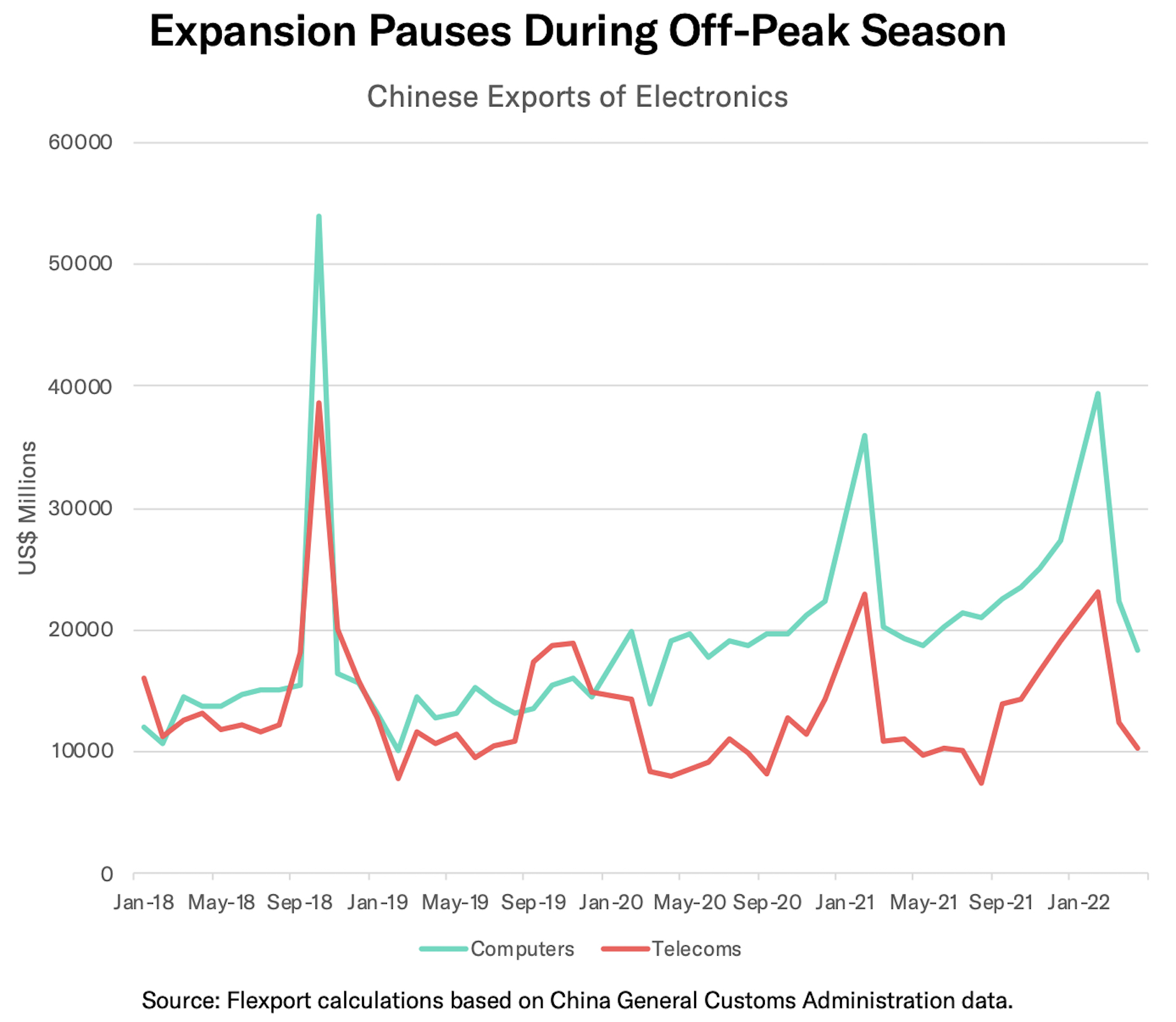 Last week Chinese semiconductor manufacturer SMIC stated that consumer demand for PCs and phones “dropped like a rock” recently and that some of its customers “are holding more than five months” of inventory. North American smortphone shipments reportedly increased by 2.7% year over year in Q1’22 but included “heavy discounting and high trade-in values” to encourage sales.

Global exports of laptop computers and smartphones were worth $410 billion in 2019, or 3% of the value of global non-commodities trade based on UN Comtrade data. As shown in the chart above, Chinese exports of computers and telecom equipment fell by 5.1% and 7.3% year over year respectively in April.

That followed a steady improvement in the first quarter, though the business is highly seasonal and sensitive to supply chain interruptions - such as factory closures - and the success or otherwise of new product release. Overstocking levels may put a cap on trade in such goods during the off-peak shipping season.