Ocean and air freight rates and trends; customs and trade industry news plus Covid-19 impacts for the week of November 15, 2022. 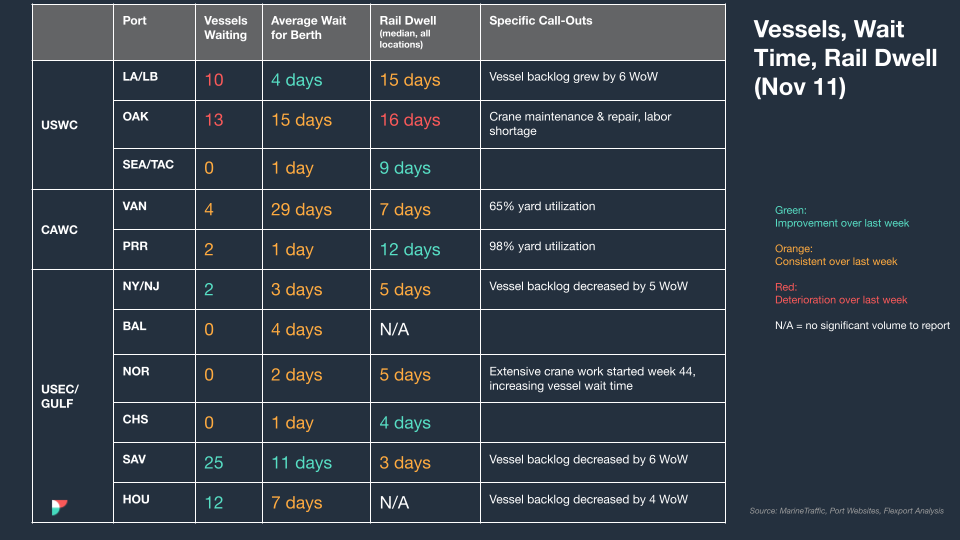 During a keynote at the Apparel Importers and Trade Transportation Conference on November 10, CBP Executive Assistant Commissioner for Trade AnnMarie Highsmith announced that CBP will be providing “additional resources” to assist importers with forced labor compliance, set to be released November 16. Highsmith also confirmed that CBP will begin publishing forced labor detention statistics broken down by industry, number of entries, and entry values in early 2023.

On November 15, the Office of the United States Trade Representative (USTR) opened the online portal for the submission of public comments regarding the renewal of Section 301 tariffs on China. The comments will cover all four Lists of goods. If you are interested in submitting comments on the impact of the Section 301 tariffs, please reach out to Flexport’s Trade Advisory team at advisory@flexport.com.

CBP Commissioner Chris Magnus resigned on November 12 after serving only 11 months in the role. Deputy CBP Commissioner Troy Miller will manage the agency again until another presidential appointee can be confirmed.

Air Cargo Continues To Pull Back Amidst Declining Demand

According to FreightWaves, the International Air Transport Association (IATA) published data showing a 10.7% decrease in cargo demand in September, as compared to 2021. This percentage represents a declining YoY trend. In addition to weakening consumer demand, the conflict in Ukraine, labor shortages, and inflation have contributed to this decline in the air market.

According to CNN, a third railroad union has rejected a potential labor deal, increasing the potential for a rail strike in early December. To prevent a strike, Congress can move to extend the cooling-off period during which unions cannot strike, or impose a contract on union members.

While the headline US CPI number fell a bit in October, all the major components are still above the Fed’s target rate of inflation. On closer inspection, there was little in the latest report to convince the Fed to back off from its rate increases.