While the headline US CPI number fell a bit in October, all the major components are still above the Fed’s target rate of inflation. On closer inspection, there was little in the latest report to convince the Fed to back off from its rate increases. 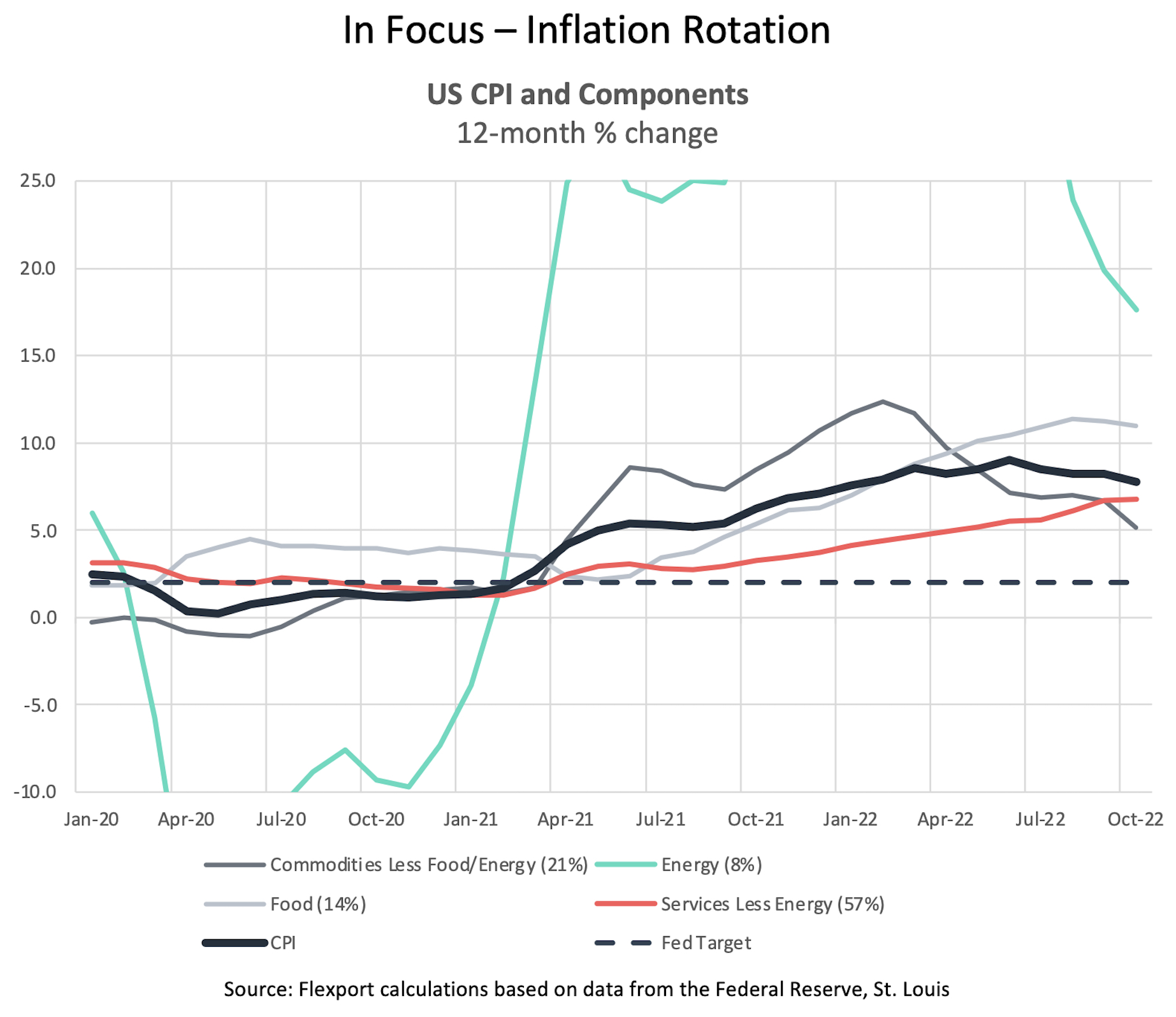 Last week, the US Consumer Price Index registered 7.7% inflation in the year to October, and there was much rejoicing. Investors took heart, stock indices rose and bond yields fell. Concerns about inflation, recession, and nasty Federal Reserve rate hikes seemed to be receding.

The chart shows the CPI as the thick dark line that dips down at the end. This broad index includes lots of subcategories as components. The other solid lines show how those components have behaved since the start of 2020.

The bounciest of the lines is the green measure of energy prices that dives below and soars above the rest of the chart, from a low of 18.3% deflation in May of 2020 to a high of 41.5% inflation in June of 2022. If the chart were scaled to include these wild swings, it would be hard to include anything else. But, of the components shown, energy receives the least weight in the index – a mere 8%.

The next bounciest is food, with a 14% weight. In the year to October, food prices rose at a 10.9% rate, down slightly from the peak of 11.4% in August. Given the volatility in food and energy, a popular inflation measure is “Core CPI,” which excludes them. In the year to October, Core CPI was 6.3%. The monthly price increase was 0.3%, which was down from 0.6% in August and September.

From the chart, we can see one reason for Core CPI to drop: Goods prices (“commodities less food and energy”) saw prices fall by 0.4% in October after holding flat in September. These prices have a 21% weight in the broader CPI index. For a year, from April of 2021, those goods prices were second only to energy in their rate of inflation.

But the chart shows that there has been a rotation among the categories. Whereas energy and goods were the highest-inflation categories before, now food and services inflation rates are rising. This isn’t an equal trade. Energy and goods have a 29% weight in the overall index; food and services, together, have a 71% weight. Services (excluding energy) have a 57% weight and that inflation rate has been ticking smoothly upwards, registering 6.7% in the year to October.

The Federal Reserve has been clear that its goal is not stable inflation, but stable prices. That means 2% inflation–the dashed line in the chart. The Fed tends not to look at overall CPI, but rather at the most stable components–e.g. services. It is particularly concerned that prolonged higher levels of inflation will drive up consumer expectations of future inflation, which then makes it harder to expunge.

For those willing to listen, Fed leaders were explicit that, while a decrease in CPI was welcome, inflation had not yet been conquered, the Fed had more work to do, and they saw serious risks in doing too little. The celebrations appear premature.

Join this month’s State of Trade webinar as we consider the implications of the midterm elections for trade.

Euro Area retail trade in September was up by 0.4% for the month, but down by 0.6% over September 2021. All of the annual subcategory figures are negative except for auto fuel, up 3.7%.

The University of Michigan’s preliminary US consumer sentiment number for November showed a 9% drop from the October figure. The biggest category fall was in buying conditions for durables. Sentiment still remains somewhat above June’s low.

US Midterm Elections have still not all been resolved, nearly a week after the voting. It was clear that Democrats would retain control of the US Senate. Republicans appeared to have the more likely path to claim control of the US House of Representatives, though the outcome remained uncertain.

The US Department of Commerce revoked Russia’s market economy status. The principal impact will be on anti dumping duty calculations. In general, studies show that non-market economies face higher dumping duties. In 2022 through September, Russia has accounted for roughly 0.5% of US Imports.

The date for any potential US rail strike was pushed back to early December by key unions, who agreed to extend negotiations with the railroads. Multiple unions need to all ratify new agreements so as to avoid a broader rail interruption.