The European Central Bank joined the U.S. Fed in hiking rates this past week. It did so to address high and rising inflation, but a key challenge will be dealing with the indebtedness of key member states. 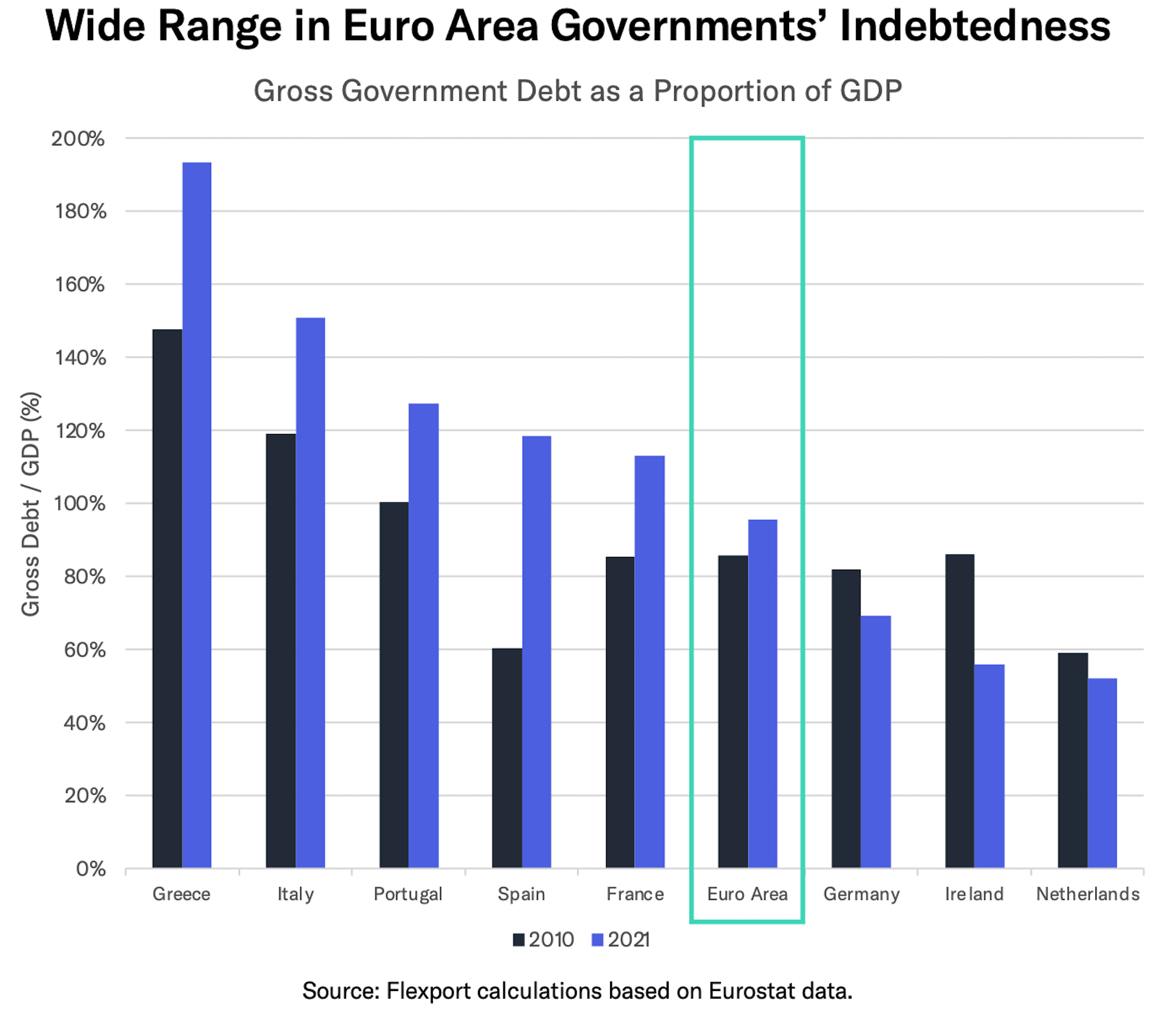 The big monetary policy headline this week is that the European Central Bank (ECB) has raised interest rates by 50 basis points. That was higher than initially expected and comes as a response to an “updated assessment of inflation risk.” As noted below, Euro area inflation hit 8.6% in June.

Why would the ECB wait until inflation was above 8% to lift nominal interest rates out of negative territory, particularly when its U.S. counterpart began moving some time back?

Two of the reasons are familiar ones, shared across the Atlantic: 1. The ECB hoped that pandemic-era inflation would prove transitory; 2. The ECB had offered “forward guidance” assuring markets that it would not raise rates quickly, and not before it had eased away from its bond-buying program.

There has been a third concern, however, that is more distinctly European. The ECB sets a single monetary policy for the 19 countries in the Euro Area. From the outset, European policymakers were aware of the potential for problems if some of the countries borrowed to the point of a debt crisis.

One way that countries have historically handled excessive debt has been to print money and encourage inflation, which can reduce the value of outstanding debt. For this reason, euro participants reached agreements – known as the Maastricht criteria – calling for government deficits below 3% of GDP and debt below 60% of GDP. The chart above shows that these limits have largely fallen by the wayside. For the Euro Area as a whole, the ratio of debt-to-GDP averaged 96% in 2021.

In assessing the severity of the situation for individual countries, it is important to look at their economic size, as that affects the feasibility of other countries stepping in and addressing the problems. Greece and Portugal together, in 2021, accounted for 3% of Euro area GDP. Italy, Spain, and France, together, accounted for 45%.

With this week’s rate announcement came a new Transmission Protection Instrument (TPI) which “will ensure that the monetary policy stance is transmitted smoothly across all euro area countries.”

A key question is how this new instrument will work in practice, which has not yet been detailed. It is meant to be used only in cases in which the recipients have shown appropriate fiscal restraint. Yet such countries are not usually the ones facing debt crises. It also appears less demanding than an existing system for Euro area countries facing debt trouble (OMT). And all of these issues arise as Italy, the most indebted of the large Euro area countries, has seen its coalition government fall apart.

Given the daunting inflation statistics, the ECB’s rate hike this week looks to be the first of many. There is a reason it approached the task with trepidation.

Flexport research reports published last week included a quick guide to the U.S. peak retail season and its impact on logistics networks based on a decade’s worth of data.

U.K. retail sales adjusted for inflation and seasonality were down 6% year over year for non-food, non-fuel sales for instore and online venues, which was similar to May’s reading. Household goods stores were -17% and online sales -12% while apparel did 5% better. The total was still 4% above the same period of 2019.

The Euro area Harmonized Index of Consumer Prices meanwhile rose by 8.6% year over year in June after an 8.1% rise in May with energy prices the main contributor. The range of inflation, from 6.5% in France to 22.0% in Estonia illustrates the policy challenges faced by ECB in managing interest rates effectively to control inflation.

Japan’s international goods trade activity climbed 33% year over year in June on the back of a 46% jump in imports linked to higher commodity prices. Exports also climbed 20% including a 26% rise in semiconductor manufacturing equipment and a 35% jump in chip shipments.

U.S. housing figures send mixed signals. The National Association of Realtors reported that existing-home sales fell 5.4% sequentially and 14.2% year over year in June, providing strong evidence of a slowdown. But the median price rose to a new high and the average number of days on market, 14, was the lowest since tracking began in 2011. With rising mortgage rates, the housing sector often feels some of the most direct impact of tightening monetary policy.

The EU and China have agreed at the 9th “High-Level Economic & Trade Dialogue” to “work together on … tackling global food insecurity, including through the export of fertilizers.” That’s likely a response to the EU needing to replace imports from Russia, which was the largest exporter in 2021, and may involve China cutting export curbs.

The U.S. and Canada have requested a consultation under USMCA rules with Mexico regarding the latter’s energy investment policies in both the power and refined oil products sectors. Prior consultations on labor standards have led to rapid resolutions, though the Mexican government appears more defiant in this instance.

The South Korean government has committed to investing in basic research and development as well as providing tax breaks to assist independence in semiconductor supply chains.

The Nord Stream 1 natural gas pipeline from Russia to Europe has been restarted on schedule after a maintenance outage. There had been concerns about Russia permanently cutting supplies in retaliation for Ukraine conflict sanctions. The line is still only running at the 40% of capacity that was set before the outage started 10 days ago.

The latest U.S. Bank freight data shows truck shipments rose by 2.3% sequentially in Q2’22 after two down quarters. That nonetheless left volumes 0.9% below a year earlier and 7.4% below Q2’19. The data is notable though in showing that the degree of upswing in volumes in U.S.-inbound ocean freight was not duplicated in trucking.

Supply chain challenges look set to continue in the aerospace sector, with both major airframe manufacturers focused on the limited availability of engines to complete jets for delivery. 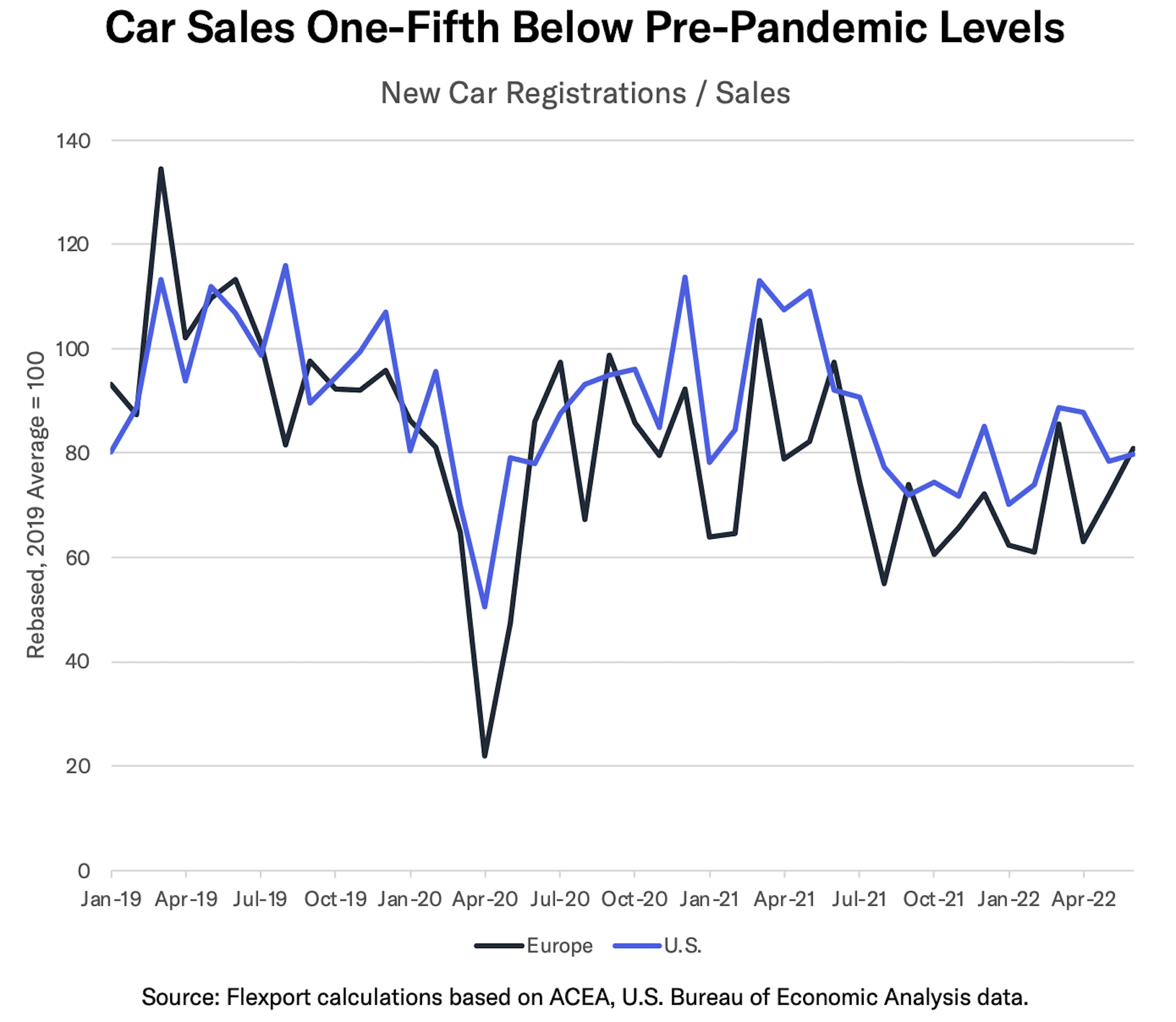 The automotive industry continues to face challenges. The Q2’22 earnings reporting season will reveal the precise challenges faced by the big automakers with many having already blamed the availability of electronics parts for lower sales.

The chart above compares new car registrations and sales in Europe (EU, U.K. and EFTA) to those in the United States. As of June, on a non-seasonally adjusted basis, sales in Europe in June were 18% higher than in the first five months of the year on average. Yet, that still left registrations down by 19% compared to 2019 on average. Sales in the U.S. meanwhile were also 20% below the 2019 average level in June 2022 having plateaued in the past four months.

The question looking forward, as supply chains recover later in late 2022 and into 2023, is whether demand will remain robust as production improves. The potential for rising interest rates may reduce the attraction of leases and other financing plans which historically have attracted low rates.