The U.S. dollar has strengthened in real terms against emerging economies and even more so against advanced economies. The different approaches of central banks in Europe, Japan, and the United States almost certainly has contributed to this swing. Among the economic changes that ensue will be a repricing of trade and an increase in crisis risk.

In Focus - The Dollar Strengthens Dramatically 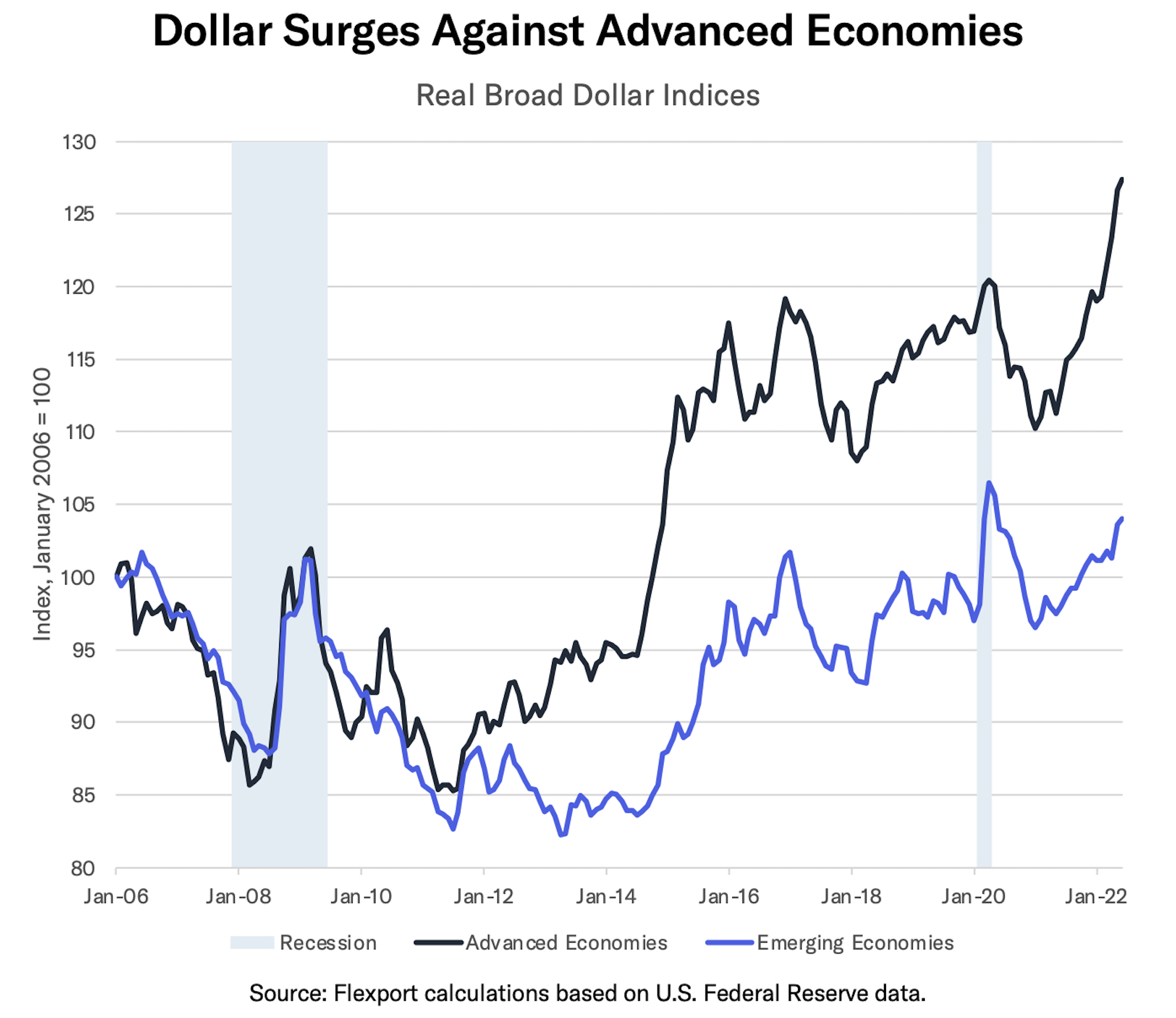 It has been a time of remarkable strength for the U.S. dollar. Over the last month, it has cost roughly 136 Japanese yen to buy a dollar. The last time a dollar was so expensive in Japan was in September 1998. Meanwhile, the dollar strengthened and touched parity with the euro. The last time the dollar was that strong in Europe was in October 2002, not long after the euro’s launch.

While these nominal touchstones grab headlines, they can be misleading. To see where goods are most expensive, it is not just the exchange rate but price levels that matter. The chart above depicts broad, real indices for the dollar and confirms its strength. For emerging economies, it is approaching its peak strength at the onset of the pandemic. For advanced economies, including Japan and Europe, it has blown past all recent peaks.

So what’s driving this dollar strength and what effects will it have?

For freely-traded currencies like the dollar, yen, and euro, exchange rates are set in currency markets and driven by supply and demand. Currency demand, in turn, can be traced to a demand for either goods or assets in another currency. While goods exports and imports are obviously important – it’s what we do! – the demand for goods tends to be less volatile than the demand for financial assets. So we’ll focus on finance.

Investors seek safety and high real returns. The desire for safety has often been cited as the reason why the dollar spikes with the onset of a crisis – as the chart shows for both the global financial crisis in 2008 and the onset of the pandemic in 2020.

For high real returns, this has to do with growth prospects, interest rates, and expected inflation. In recent months, we have seen the U.S. Federal Reserve aggressively hiking interest rates, while the European and Japanese central banks have so far held back, even though the Euro area and the United States have experienced similar levels of inflation.

In Europe, there are particular concerns about the effect of interest rate hikes on countries such as Italy. In Japan, there has been a prolonged slump and deflation and there is not yet an eagerness to apply the monetary brakes. It should be no surprise to see the dollar rise when major counterpart central banks are not matching Fed moves.

In developed countries, the principal effect of a stronger dollar will be to make U.S. goods look more expensive abroad (dampening exports from the U.S.) and foreign goods appear cheaper in the U.S. (stimulating imports to the U.S.). For the U.S., this will have the effect of slowing down the economy and stifling inflation – the latter being a key aim of the Federal Reserve.

For Europe, however, a strong dollar will serve as a stimulus and will raise the euro price of commodities priced in dollars – an unwelcome boost to inflation.

The effects are similar in emerging economies, with some additional twists. Countries with currencies pegged to the dollar will experience the same effects as the U.S., whether they want them or not. For countries that have borrowed money in dollars, a strengthening dollar will make it ever more difficult to repay the loans.

It’s possible to make all these global financial adjustments without spurring a crisis, but risks are likely to rise with the dollar.

Flexport research reports in the past week included a deep-dive into the timings and drivers of the peak seasons for retail, inventories, ocean shipping and air freight in the United States with patterns over the past decade compared to the past three years. We also took another at the EU’s Carbon Border Adjustment Mechanism which has doubled in scope after a recent parliamentary vote.

The U.S. Consumer Price Index (CPI) rose by 9.1% in the year to June. Excluding the volatile food and energy categories, the core CPI was up by 5.9%. The sequential (monthly) increase in core CPI was 0.7%, the fastest rate since June 2021

U.S. manufacturing production fell in June by 0.5% for the second straight month. The production level was still up 3.6% over June 2021. Capacity utilization in manufacturing fell to 79.3%, which is still above the long-term average of 78.2.

Retail sales in the U.S. were up by 1.0% sequentially in June in nominal terms, which roughly kept pace with inflation. After gasoline, the biggest gains were in nonstore retail (2.2%) and furniture (1.4%). The biggest monthly drops were in department stores (-2.6%) and building materials and garden (-0.9%).

China’s international trade activity increased by 10.3% year over year in June, including export growth of 17.9%. The latter beat expectations for growth of 12% and may reflect a flood of shipments previously held up by trucking restrictions linked to COVID-19 lockdowns. Of the 30 sectors where data is published only five declined year over year.

EU merchandise trade rose by 30.2% year over year, including a 29.7% rise in imports - the fastest rate since April 2021’s comparison to pandemic-disrupted levels. Inflation played a large part, thanks to commodity price increases linked to the conflict in Ukraine. Real imports (i.e. adjusting for import price inflation) meanwhile fell by 0.6%, marking the fifth straight decline.

Russia’s exports fell by 8% sequentially in Q2’22 vs. Q1’22 while imports declined by 18.5% according to Bank of Russia data. The figures are consistent with monthly data from China, the U.S. and EU which indicate a 12% dip in exports and 15% drop in imports in April vs. March.

Sabine Weyand, the European Commission’s Director-General for Trade has called for increased U.S.-EU cooperation on enforcing sanctions against Russia. Many of the original sanctions include wind-down periods which end from July onwards. Weyand has noted that evidence of evasion is apparent but that “it's not widespread yet.”

The U.S. International Trade Commission will extend its hearings into Section 301 duties on imports from China, which are subject to a mandatory review, to three days instead of one day. A final decision is only due by March 15, 2023. Join our forthcoming webinar to find out more.

The reformation of global energy supply chains continues in the wake of the Ukraine conflict. That comes as oil price has dropped below $100/bbl on the back of rising concerns about the prospects of a recession.

Iran’s intermodal International North-South Transportation corridor may soon be reopened, facilitating trade between Russia and India. The route is a sanctions-free alternative to the Suez Canal.

The EU has ruled that Russian goods can transit by rail to and from the Kaliningrad exclave after restrictions were applied by Lithuania. Inspections can still be carried out for military and dual-use goods which were already banned.

The National Retail Federation expects back-to-school / college spending to increase by 3% in 2022 versus 2021 to set a new record, with 38% of respondents expecting to cut spending elsewhere to cope. Separately the NRF expects U.S. ocean shipments to start to fall year-over-year from August.

The FDRA’s latest survey of the footwear industry finds 87% of respondents expecting to see falling sales in the next six months. Inflation worries are becoming more important than supply chain concerns.

Two new estimates of PC shipments indicate that shipments in Q2’22 fell by 13% to 15% year over year on inflationary pressures on budgets and a “steep downturn in demand for Chromebooks” after the pandemic boom. 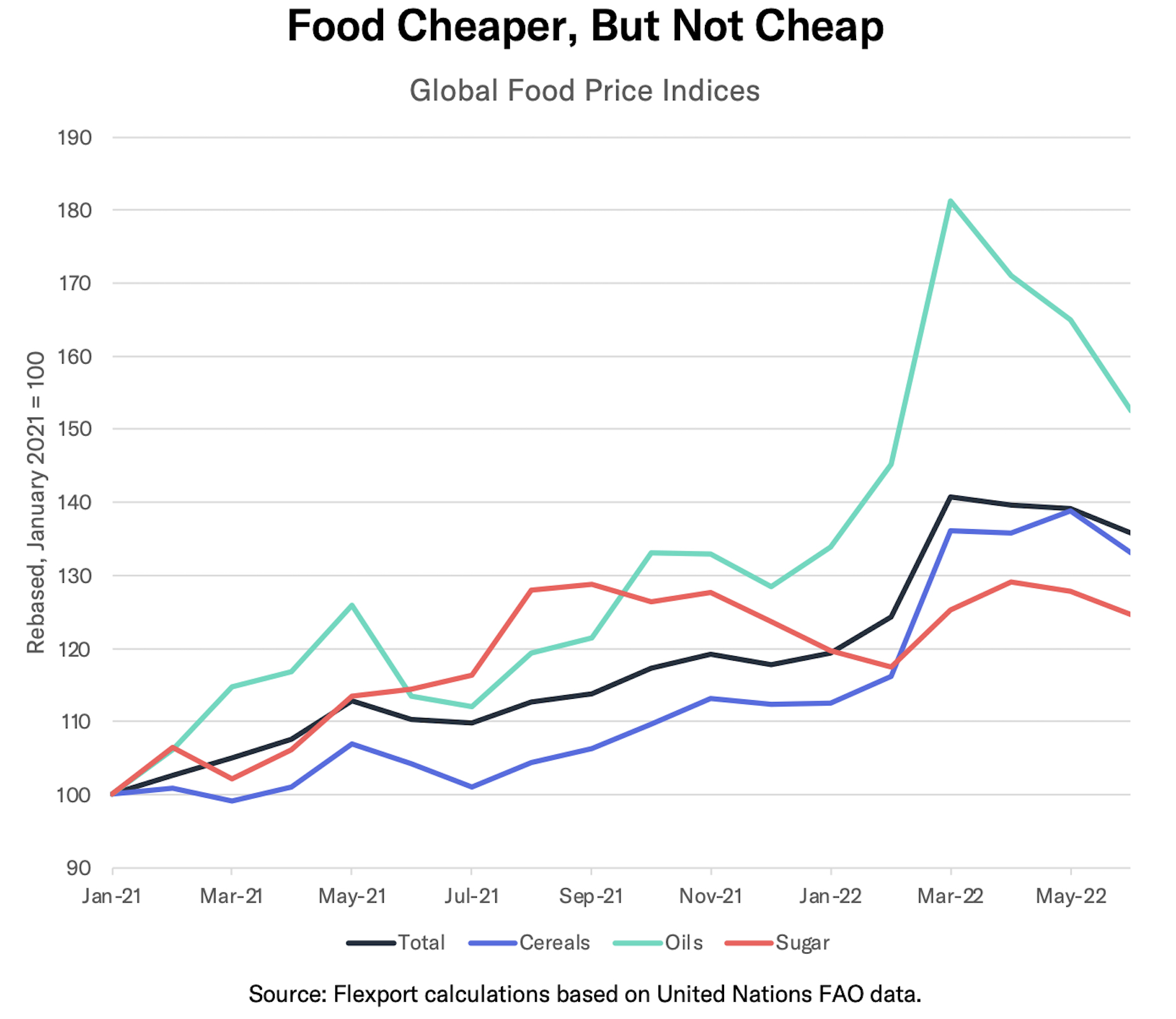 Are we past the worst for food price inflation? Upward pressure on commodity prices from the conflict in Ukraine has been particularly stark for food supply chains, and by extension on the poorest both globally and within countries.

New data from the United Nations shows that total food prices fell by 2.3% in June vs. May and are 3.4% below their March peak. That’s been led by oils which fell by 7.6% sequentially and by 15.9% vs. March. Cereals fell by 4.4% sequentially.

The decline may reflect a move towards reopening trade lanes, particularly for wheat and sunflower oil where Ukraine is a dominant global supplier, with a Turkish mediated deal reportedly set to be signed in the coming week. In the meantime around 130 vessels may be stranded waiting to pick up supplies or to leave the conflict-affected area.

It’s too soon to cheer though. The new routes are not proven. The conflict continues. Prices are also still well above their pre-conflict levels, with the total food index still standing 37% above its January 2021 level.