Why does coal matter for European supply chains? How significant are the new sanctions against Russian coal exports? Which industries might be affected and where else will the coal come from? This report considers the latest EU sanctions and finds that a wide range of industries may be affected, but the impact will vary among EU member states. Options for alternative sources are limited.

The continuing conflict in Ukraine has elicited a widening and deepening of sanctions against Russia. As discussed in previous Flexport research, these sanctions started targeting financial institutions and have steadily expanded to include a wide range of industries.

Most recently, on April 8, the European Union approved new sanctions that will ban Russian coal imports and a wide range of other products including caviar, building materials, wood products and furniture. There’s also the prospect of a further expansion of sactions to include oil in the future.

Big Issue for Latvia, Small Issue for Europe as a Whole

The measures impact all types of coal, including anthracite, lignite, coking coal, and similar products and could have an impact on both the energy generation and steel production industries. 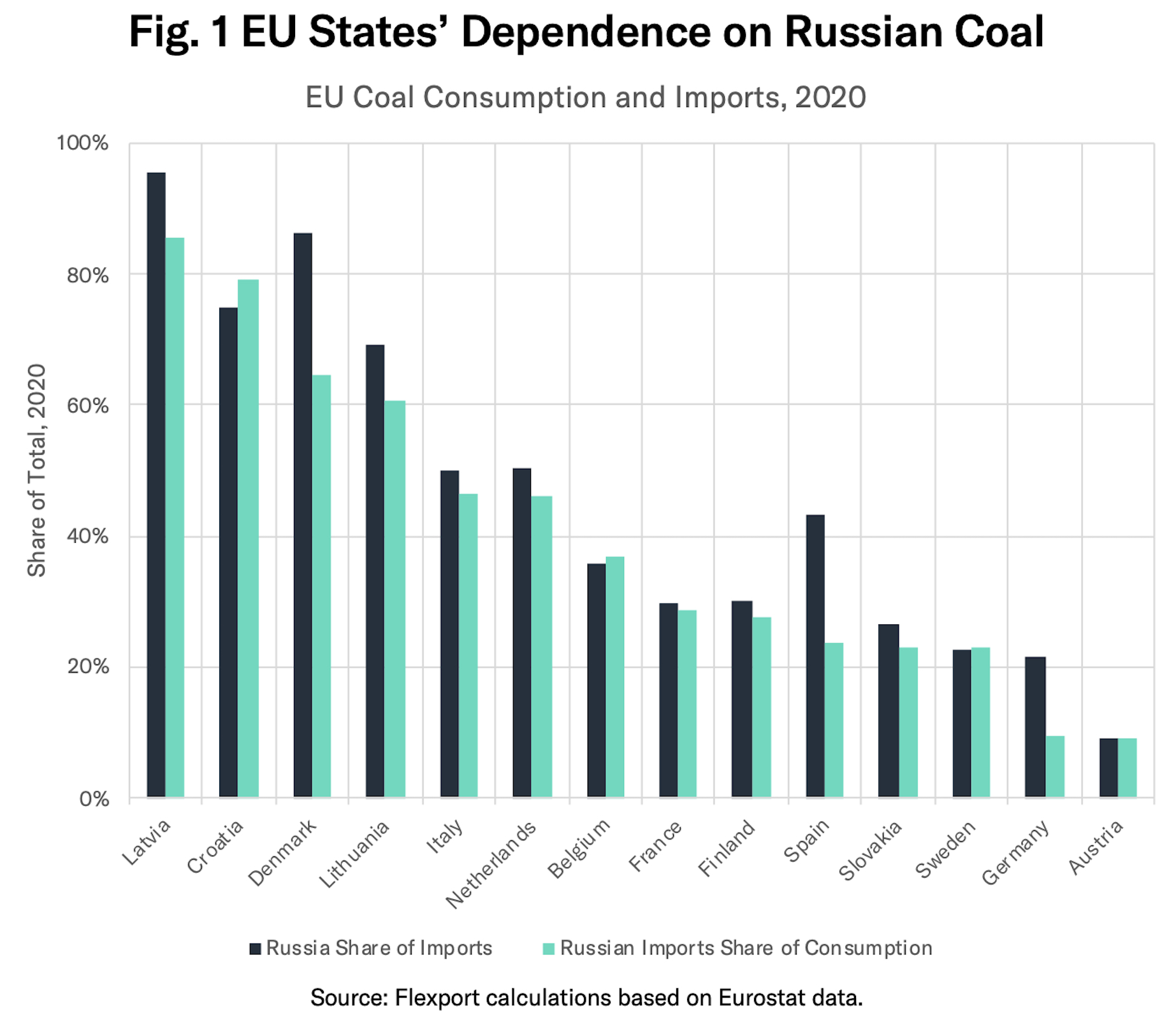 Imports accounted for 36% of EU solid fuel (mostly coal but also including lignite) consumption requirements in 2020, according to Eurostat, while Russia represented 19% of those imports. Doing the math, Russia represented around 7% of EU coal use in 2020.

As shown in Figure 2 though, in some states the Russian share is significantly higher, reaching 86% of Latvia, 79% for Croatia and 65% for Denmark.

Coal is used in several industries, raising the prospect of significant disruptions across industrial supply chains:

Aside from finding alternative supplies (see below) coal users in the EU will also have to contend with higher fuel costs. 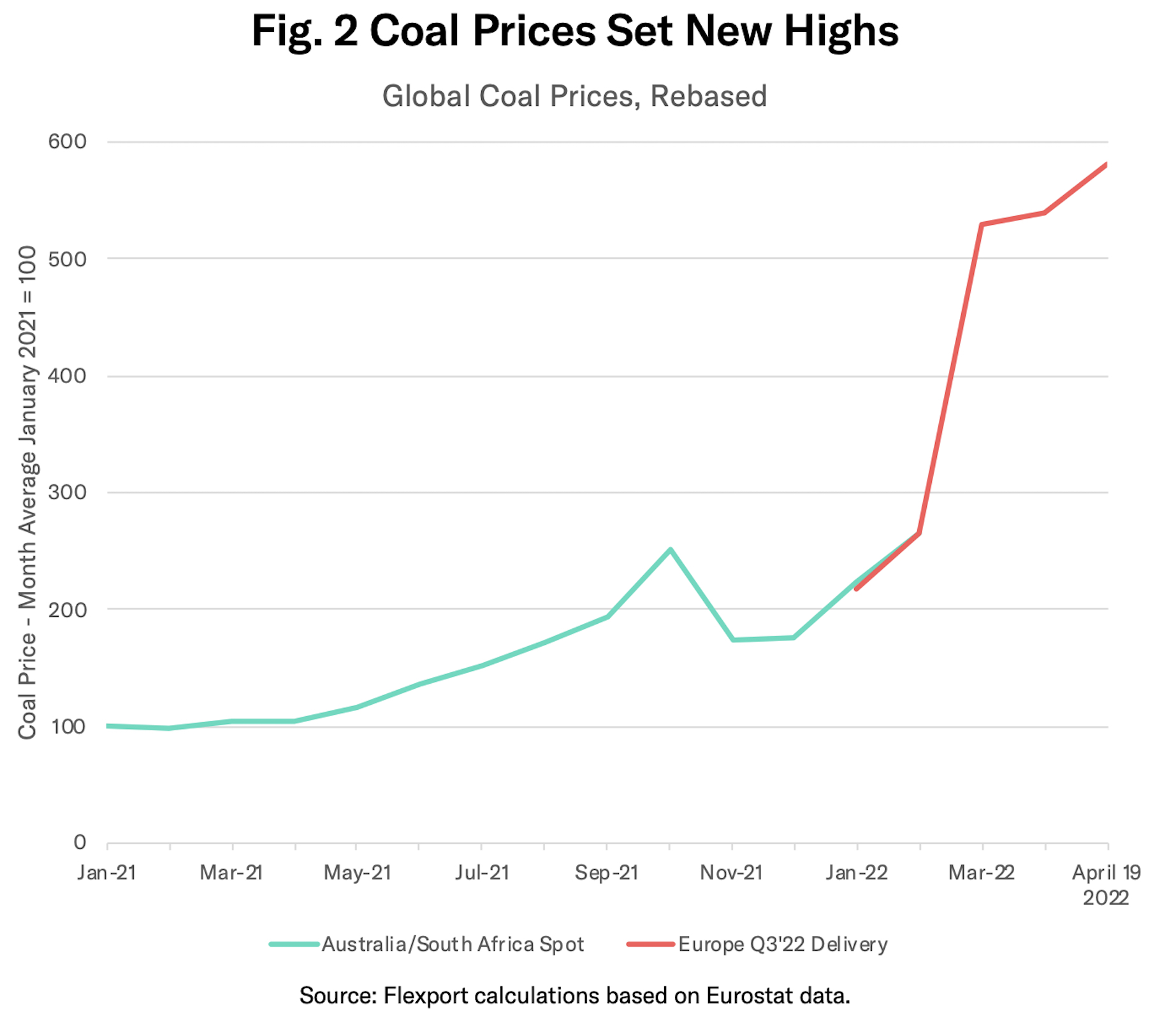 Coal prices increased steadily during the period of geopolitical tensions ahead of the conflict in February. By October 2021, coal prices for spot (immediate) delivery out of Australia and South Africa (based on IMF data) had reached 250% of their January 2021 level as shown in Figure 3.

Alternatives Include Other Fuels, Other Sources

On the assumption that EU coal mines are already running at full capacity, the options to offset the loss of 7% of coal coming from Russia will need to either come from substitution (alternative fuels) or from other countries.

The VDKi (German coal buyers’ association) has stated that alternative coal sources can be found by winter 2022/23 though there will be higher costs (see Fig. 3 above) and technical issues for coal-fired power plants. Notably, the new regulations include a derogation for coal through August 2022. 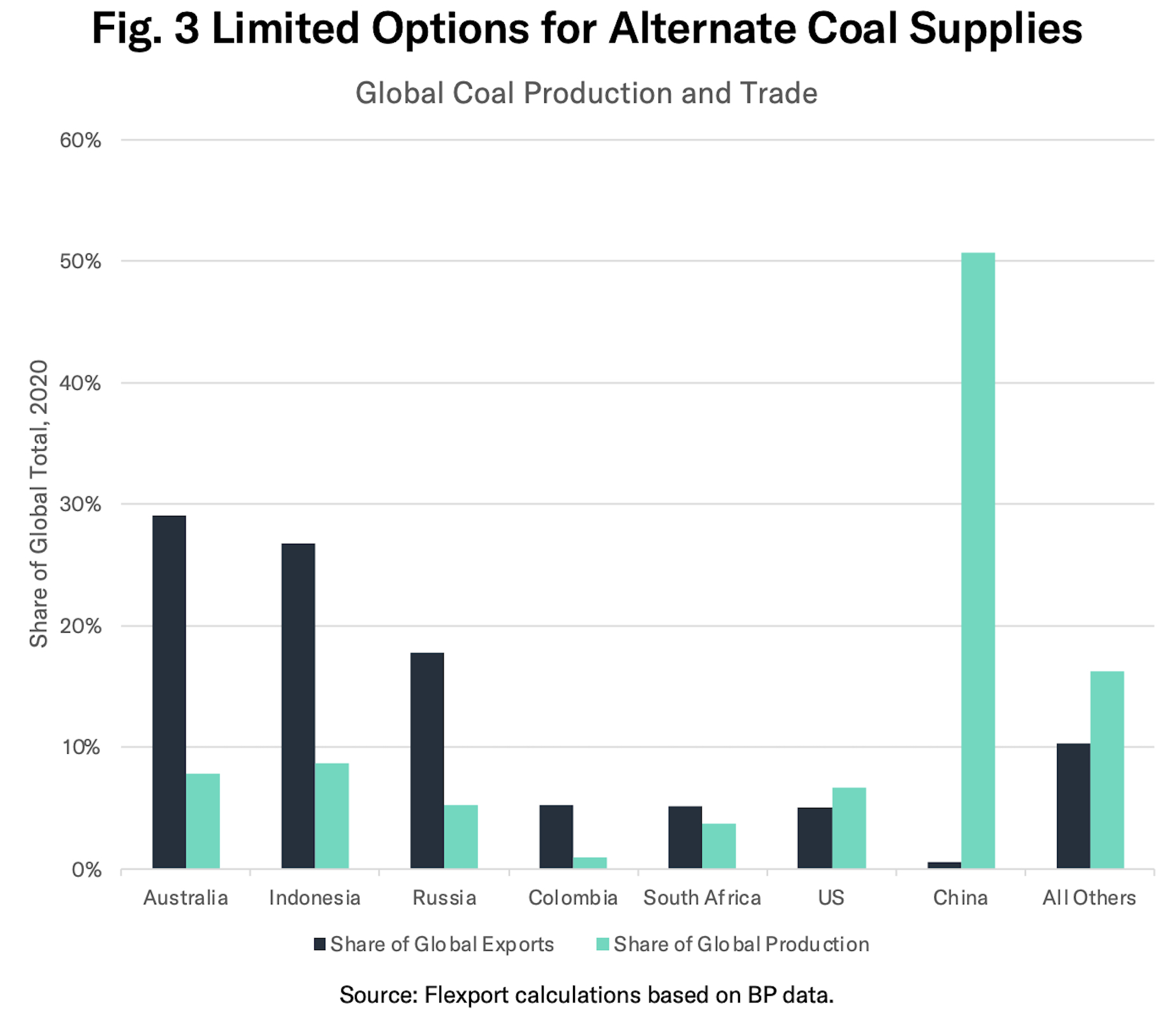 As shown in Figure 3 China dominates global coal production, with 50.7% of global production in 2020 according to BP data. Yet, that is mostly used for domestic purposes rather than export with China representing just 0.6% of exports.

The major producer-exporters that may be able to take advantage of extra sales opportunities in Europe include Australia and Indonesia, each with a larger share of production (29.1% and 26.8% respectively) and exports (7.8% and 8.7% respectively) than Russia. Another option may be exports from the U.S., where a coal export surge could pair with additional natural gas sales to the EU.

The EU is not, however, the only market trying to attract coal suppliers. Japan has already reportedly banned Russian coal imports, while the G7 group more broadly will also “expedite our plans to reduce reliance on Russia for our energy, which include phasing out and banning Russian coal imports.”

As an offset, though, Russian exporters are already reportedly boosting shipments to China, and being paid in yuan to address the issues from financial sanctions. Indian importers are also reportedly looking to buy Russian coal at a discount to prevailing market prices.

In conclusion: New EU sanctions against Russian coal exports will impact many industries but will affect member states to very different degrees. Alternative sources of coal aside from Russia may prove challenging and more expensive to secure.