Economic growth in the EU-27 is grinding to a halt. How severe is the downturn and what does it mean for logistics networks? In this report we review the state of the EU economy and introduce the European version of Flexport’s Logistics Pressure Matrix. We find that pressure on Europe-bound logistics networks is dissipating but is still well above pre-pandemic levels.

The economy of the European Union has experienced rapidly slowing growth in Gross Domestic Product (GDP) since Q4’21. 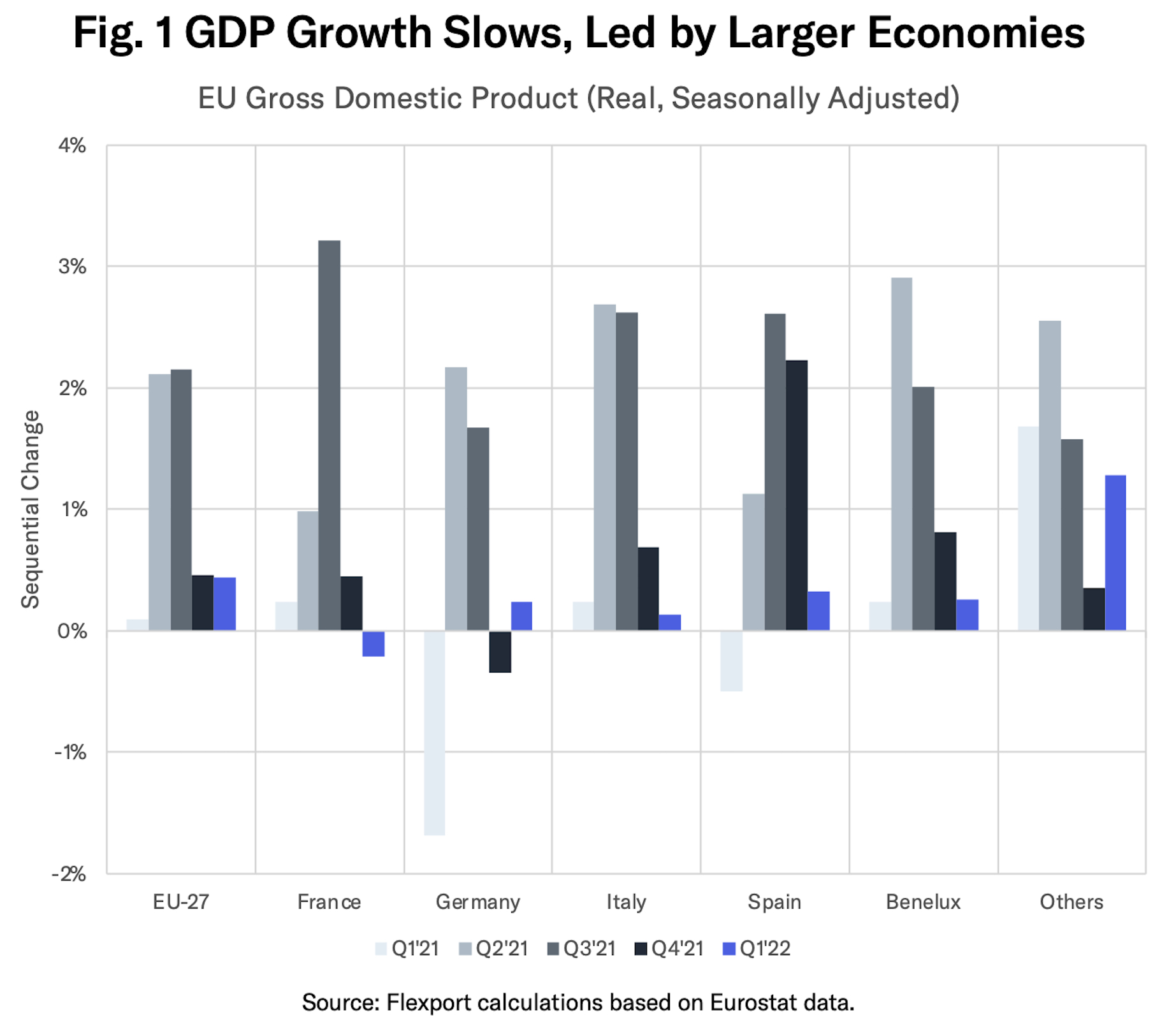 As shown in Figure 1 GDP across the EU-27 increased by just 0.4% in Q1’22 after a 0.5% rise in Q4’21. The slowdown has been led by the larger economies with France actually contracting in Q1’22. Eastern European countries, part of the “Other” segment in the chart above, grew faster though that may have reversed since the start of the conflict in Ukraine.

One of the major results of the Ukraine conflict has been a rapid acceleration in commodity prices, which in turn has contributed to rising product- and consumer-price inflation. 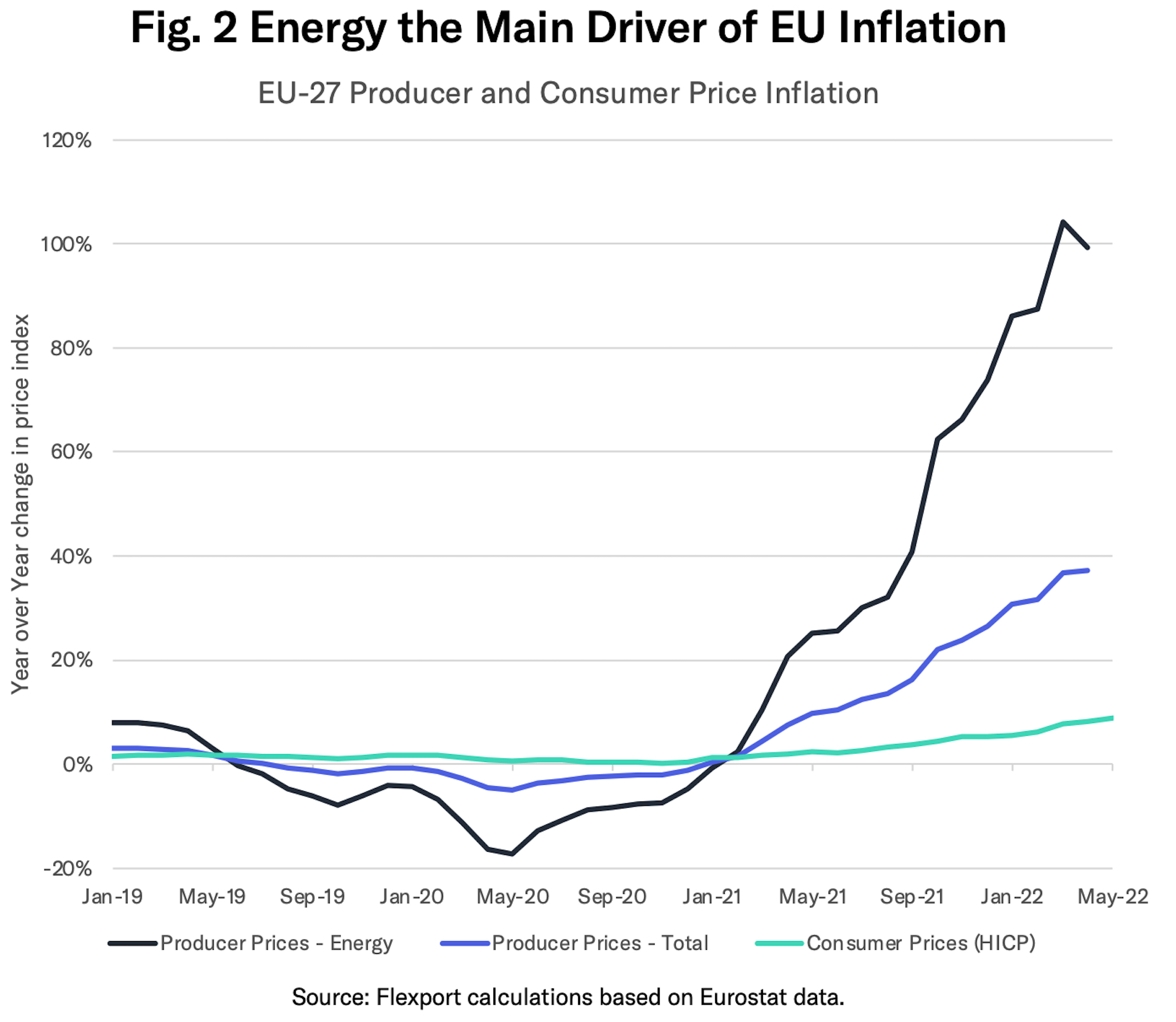 The energy price component of EU-27 Producer Price Inflation reached 99% in April 2022 compared to a year earlier, down slightly from 104% in March and reflecting the volatility in energy prices caused by a realignment of energy supply chains.

Higher energy prices contributed to a 37% increase in total PPI, though it’s worth noting that previously elevated demand and supply chain constraints also contributed, leading prices for durable goods 8.5% higher and inflation on nondurable goods to 11.2%.

Together that contributed to an 8.8% rise in EU-wide consumer prices in May 2022, the highest since the HICP series started in 1997 and double the prior peak in 2008. The persistent elevation in inflation has drawn a policy response from the European Central Bank in the form of announcements of plans to cut back quantitative easing and increase interest rates. In due course that may cut into economic activity and reduce demand for logistics services.

The good news is that unemployment levels in the EU are still low. For the EU-27 overall unemployment stood at 6.2% in April 2022—a record low. Yet, in some countries—particularly in southern and eastern Europe—the rates are significantly higher. That also acts as a salutary reminder of the diversity in the European economy and the challenges in tracking and addressing its economic drivers.

So, how do we track the backdrop of a weakening, high-inflation economy on supply chains and the logistics industry?

In early 2022 we introduced the Flexport Logistics Pressure Matrix, which focuses on the major demand drivers and activity indicators needed to track a slowdown in the U.S. economy and logistics networks. We’re now launching a similar matrix for the EU, though the lower-quality nature of statistics reporting—in terms of granularity and latency—makes tracking more challenging.

We’ve identified eight measures across demand (consumer confidence, industrial confidence, retail trade and inventories) and logistics activity (deflated trade, shipping rates, ocean and air timeliness) which can provide a broad overview of conditions. These will be updated on a weekly basis, with new measures added as data sets become available. 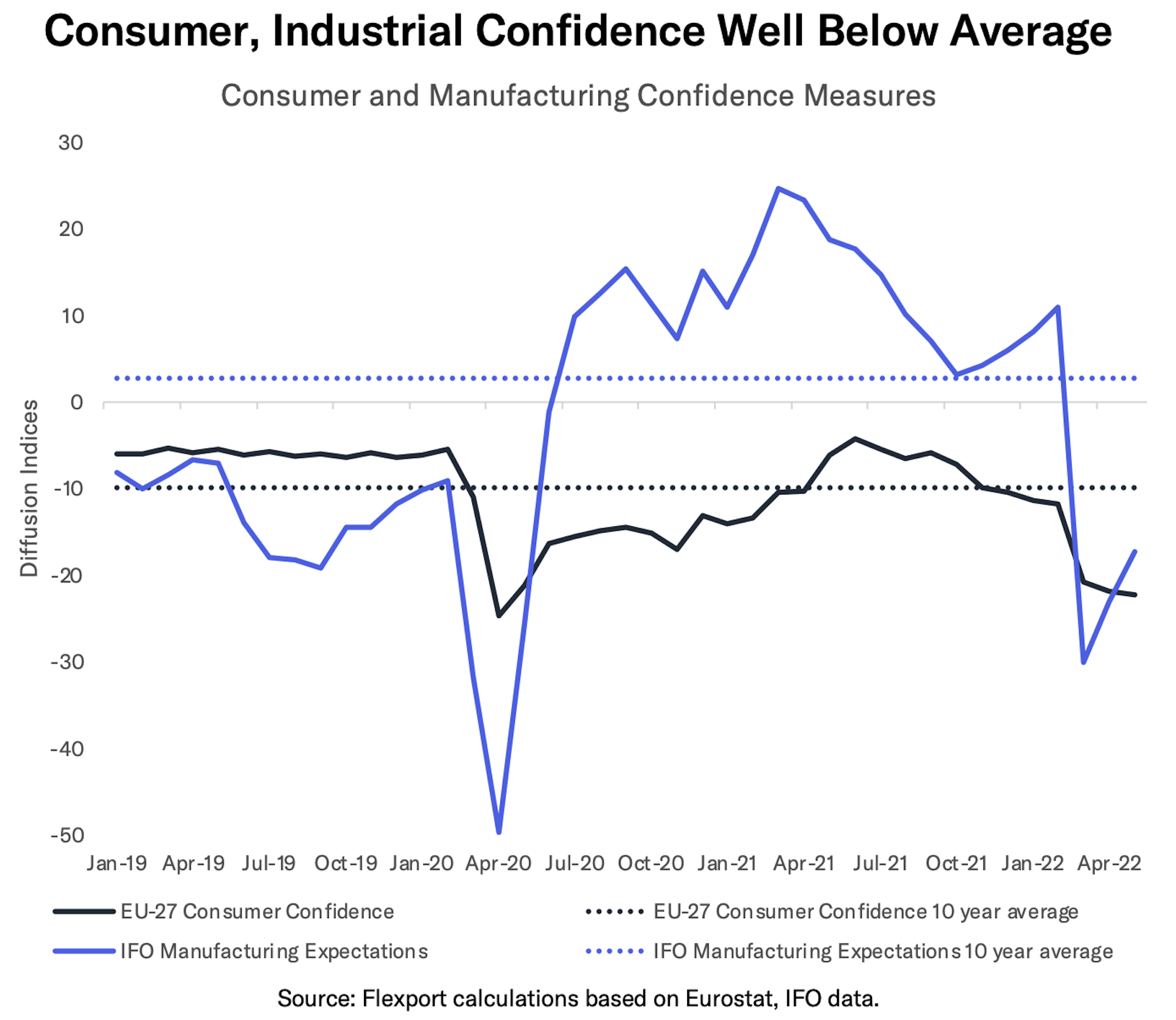 Consumer and Industrial Confidence (Updated May 30, 2022): Consumer confidence in the EU has continued to plumb new depths, having dropped below its 10-year average in November 2022 as shown in the chart above. At -22.2 in May (10–year average -9.9) that was the lowest since the early-pandemic low of April 2020. The slide likely reflects the inflationary concerns flagged above as well as uncertainties caused by the conflict in Ukraine. Lower consumer confidence portends lower spending and hence reduced pressure on logistics networks.

Industrial confidence has also been shaken by the supply chain disruptions resulting from the conflict, which added to existing complications caused by a shortage of components. Rising producer prices and concerns about further consumer price hikes in the face of ECB tightening have driven the IFO index of German manufacturing sentiment to -17.3 in May.

While that was better than the trough in March it was still well below the 10-year average of 2.7. Lower manufacturing confidence may be a sign that firms are planning to reduce manufacturing activity, hence lowering demand both for imported components and export sales, and in turn cutting the need for logistics services. 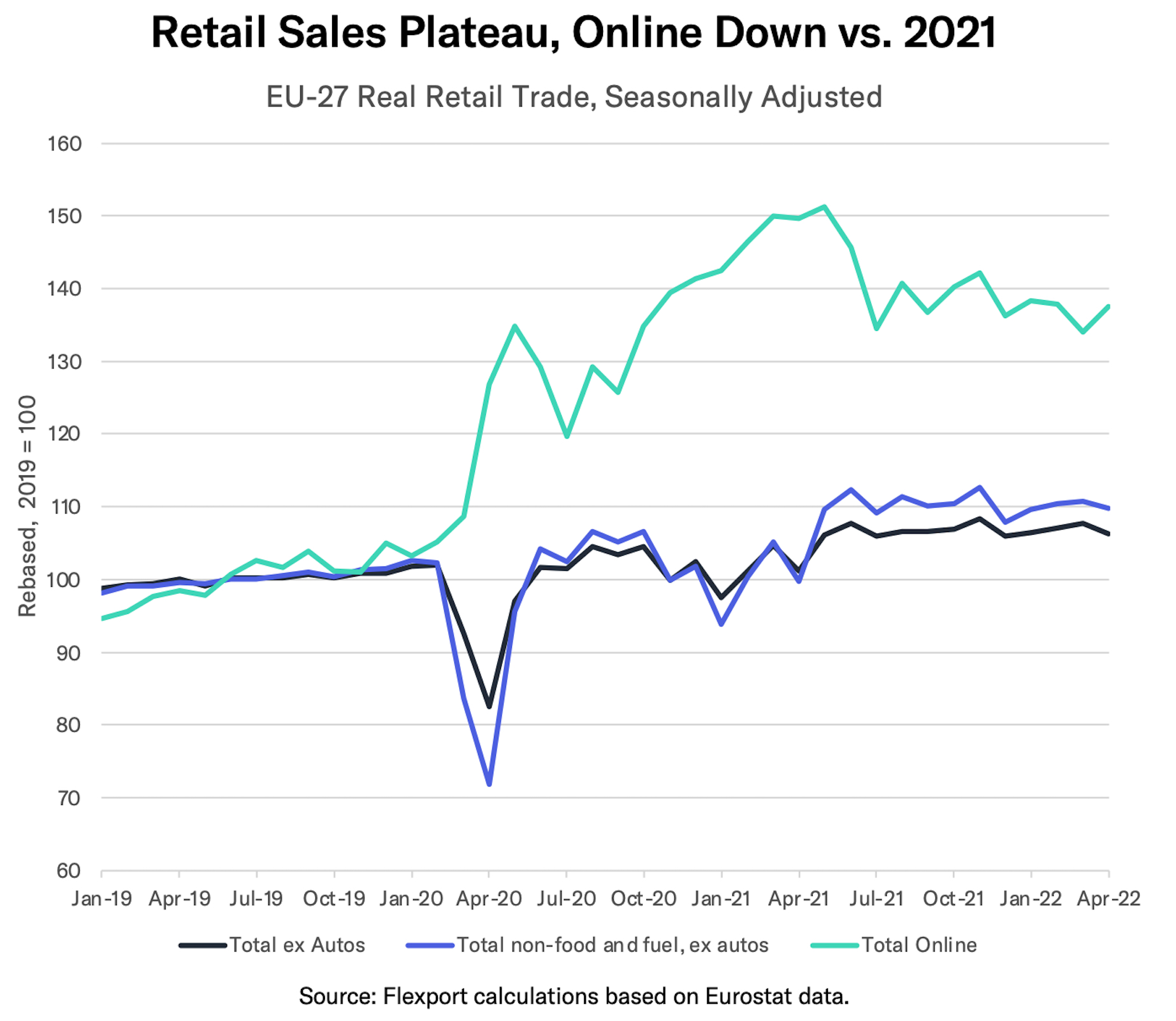 Retail Trade Activity (Updated June 23, 2022): EU retail sales, like those in the U.S., expanded rapidly during the pandemic in response to diverted consumer spending from services and a desire to improve home living conditions.

As of April 2022 sales excluding autos, food, and fuel were still 10% above April 2019 levels in real (i.e. inflation adjusted) terms, though a 1% month-on-month dip suggests sales have plateaued. Online sales (the green line in the chart above) improved sequentially but are nonetheless 8% below the year-earlier level.

Broadly speaking a significant decline in real retail sales on a seasonally adjusted basis in the order of 5% or more will be needed to reduce pressure on logistics networks. 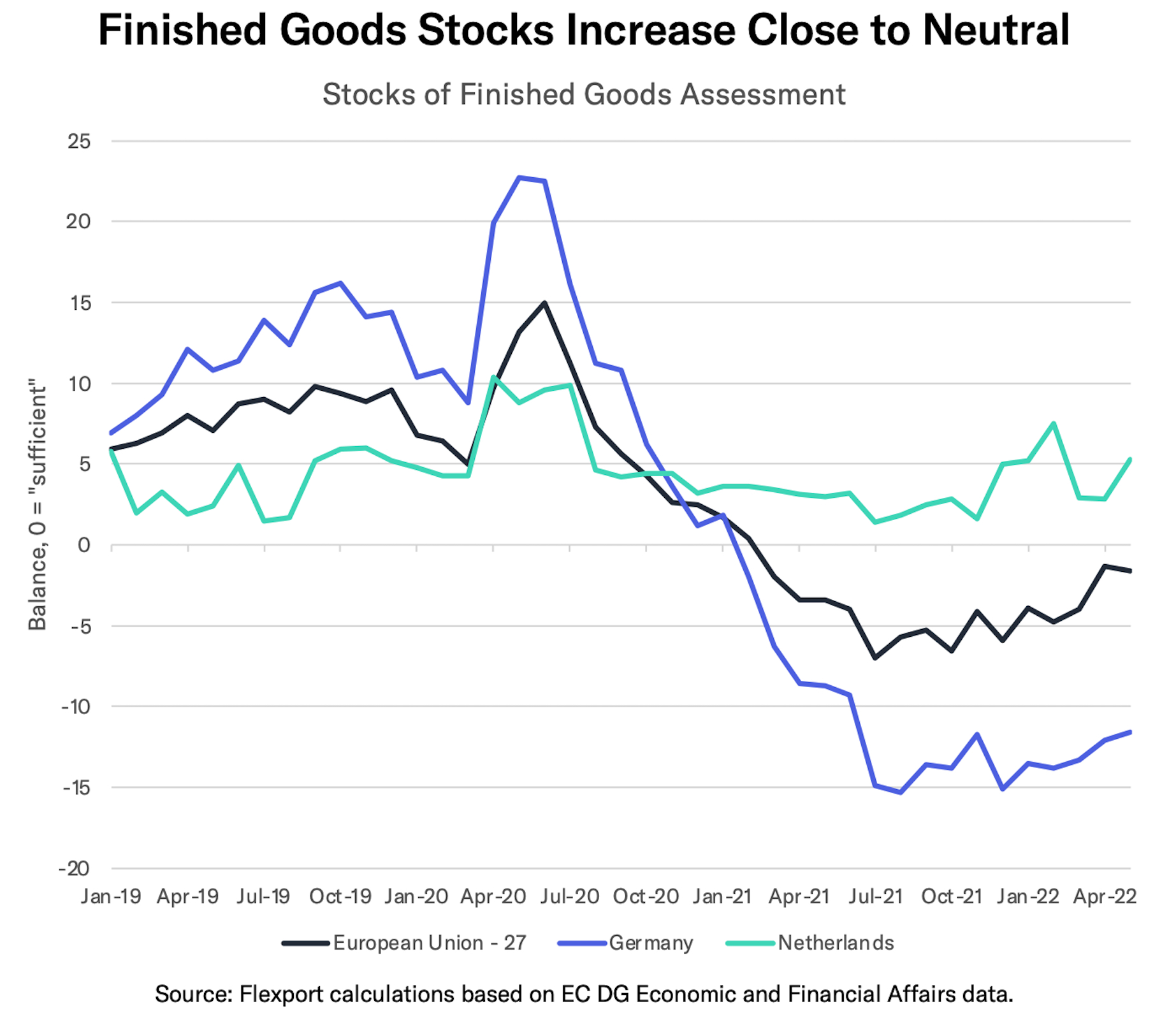 Stocks of Finished Goods (Updated May 30, 2022): There is not a readily available source of inventory data equivalent to that used in the U.S. Logistics Pressure Matrix, so instead we track corporate assessments of finished goods availability. The chart above shows a balanced diffusion index where zero indicates “sufficient” wholesale inventories and a figure below zero indicates a shortfall.

The black line for the EU-27 overall shows a reading of -1.6 in April, which compares to a trough of -6.6 in October 2021. There’s a marked difference by country which largely reflects the relative importance of capital and consumer goods. Inventories in the Netherlands, which reflects commercial and consumer goods, have remained in sufficient territory. Capital-goods-centric Germany is still well-below sufficient levels as well as being more cyclical.

An inventory assessment at or above zero indicates a need for reduced imports and hence reduced pressure on logistics networks to carry inventory-rebuilding stocks.

Having established the demand side of the equation in terms of requirements on goods for sale, processing, and inventory we can turn to indicators of activity within logistics networks. These are somewhat less developed than for the U.S., for example few EU ports report monthly activity data. 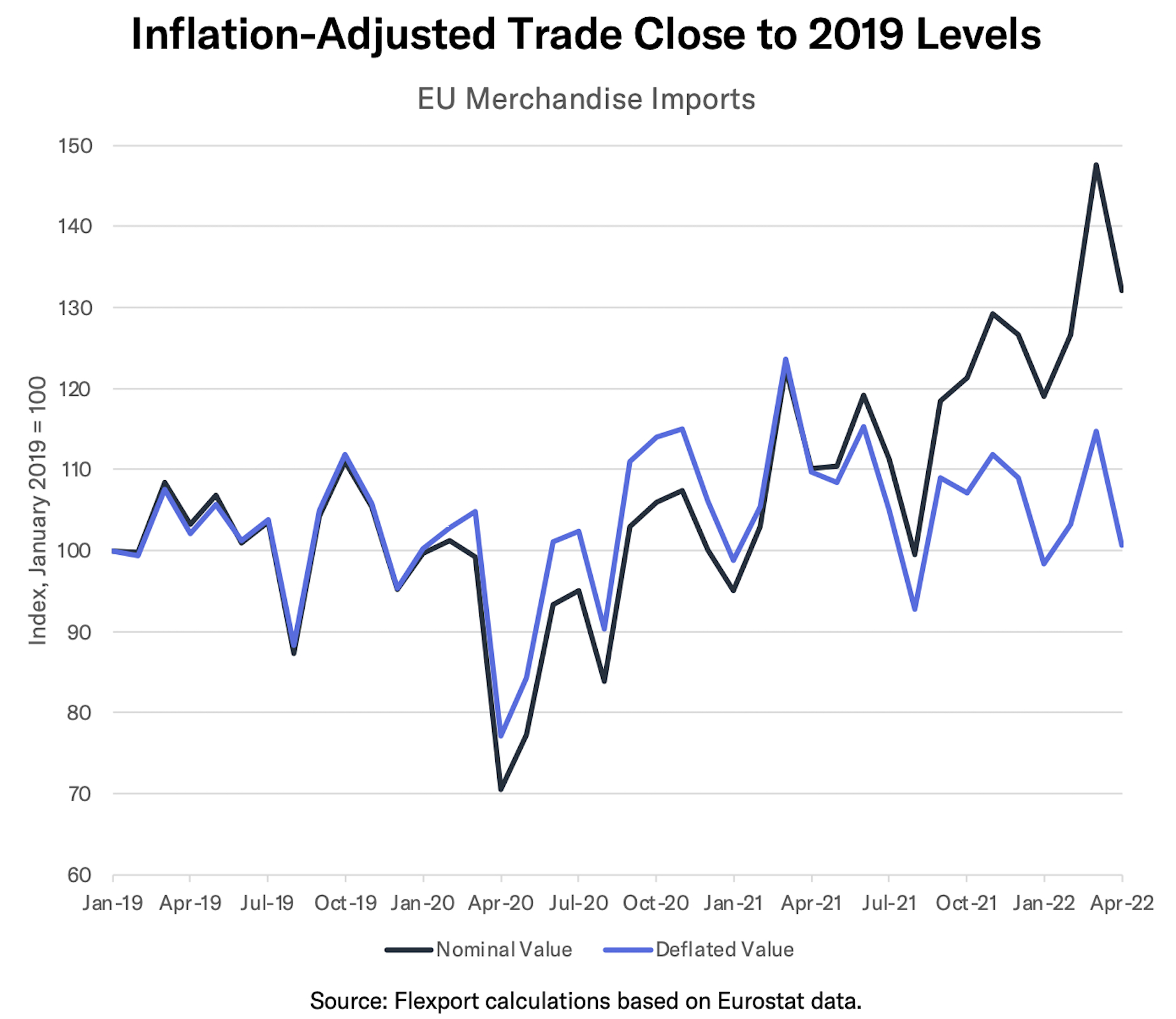 Deflated Trade (Updated June 15, 2022): One way to access underlying trade activity is to take the nominal value of merchandise trade and deflate it by the import prices element of PPI. In the case of the EU-27 the nominal value of imports climbed by 19.9% year over year in April. Once deflated by import price inflation, the real value of imports fell by 8.2% on a year over year basis, marking the fourth straight monthly downturn.

That also left the real value of imports 1% below the same month in 2019, suggesting that a significant part of the pressure on networks may already have lifted. It should be noted, however, that these figures include shipments of break-bulk cargo (e.g. autos), commodities (including oil, metals and agricultural products) and airfreight as well as containerized sea freight. 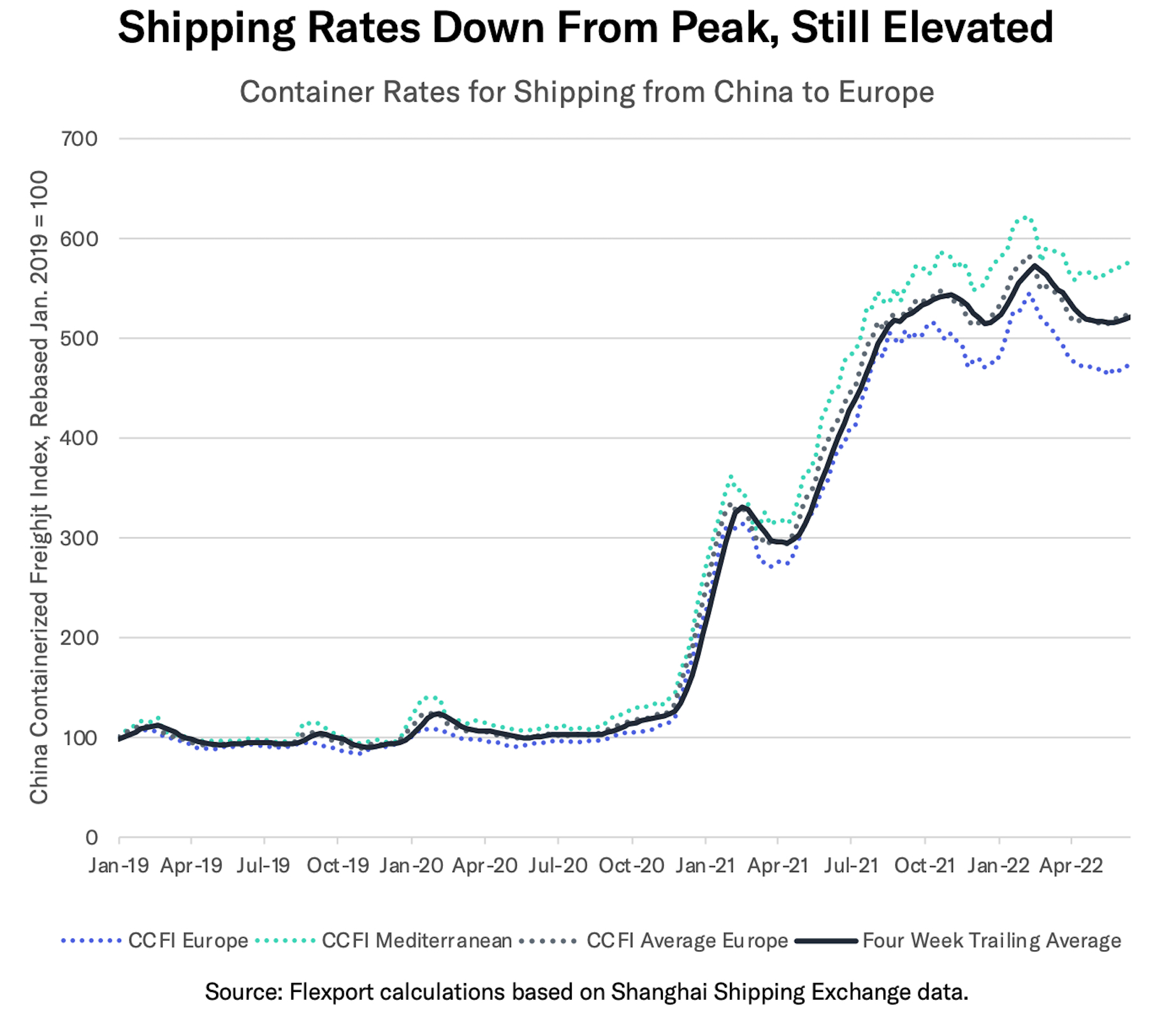 China-to-Europe Shipping Rates (Updated June 17, 2022): Container shipping rates from China to Europe, including both Northern Europe and Mediterranean ports, are already 9% below their February 2022 peaks as of the four-weeks to June 17. A decline in April has since stalled, perhaps indicating uncertainty about the impact of factory closures in Asia and the prospects for reduced demand during the forthcoming peak season.

Rates are nonetheless still 5.2x their levels of early 2019, suggesting market prices still include fundamentally different expectations for services demand and availability of vessels compared to the pre-pandemic period. 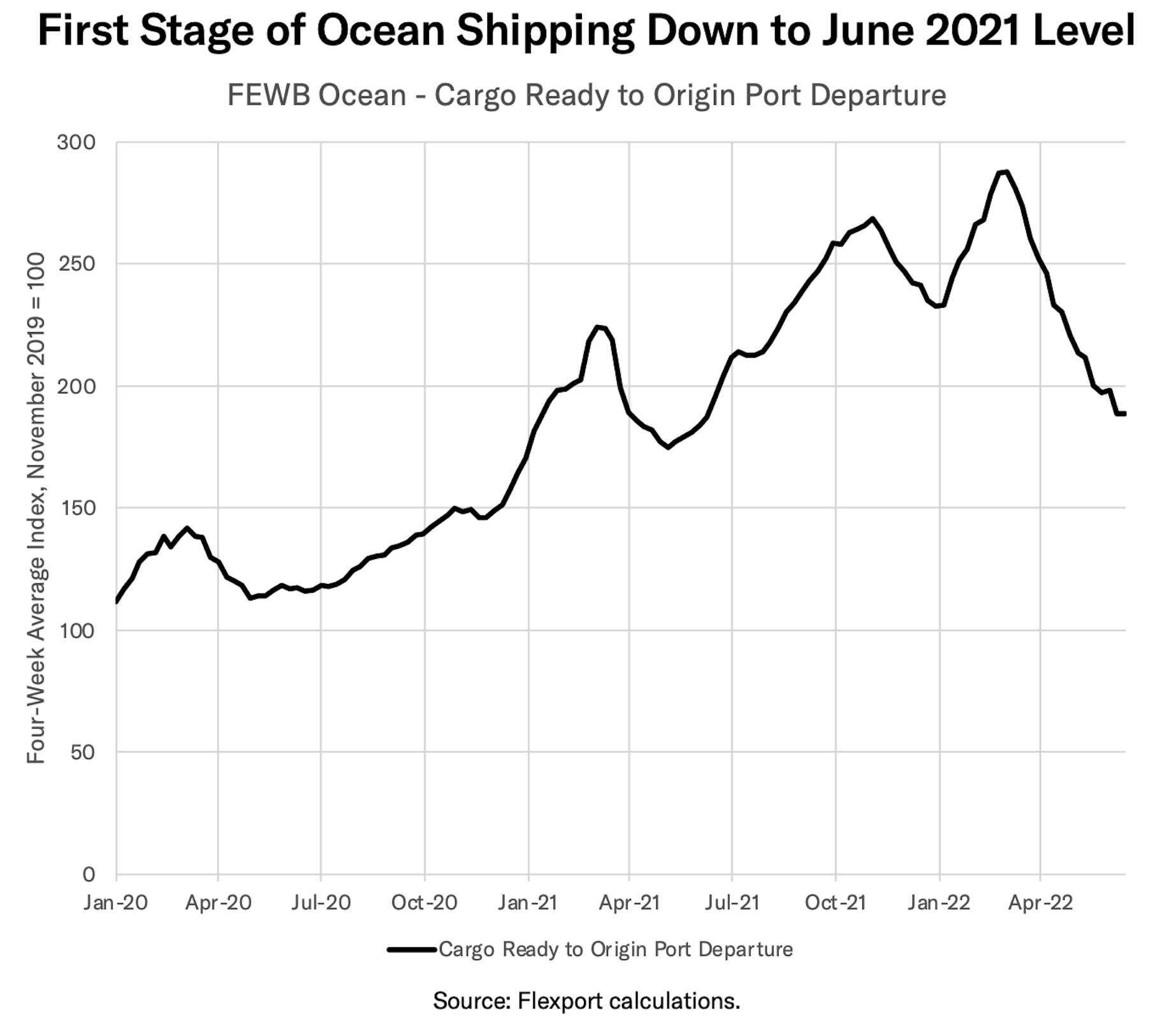 Ocean Freight Handling Times (Updated June 21, 2022): Flexport’s Ocean Timeliness Indicator for Far East Westbound (FEWB) routes for shipping from cargo-ready in Asia to destination-port departure in Europe has declined to 95 days from a peak of over 120 days at the start of April.

As shown in the chart above, that's largely explained by a slide in the first stage of the process, from cargo-ready to origin port departure. In the four weeks to June 21, 2022 the index of that first stage was 35% lower than its peak and at a level last seen in June 2021. The time taken is nonetheless still 90% longer than at the end of 2019 suggesting continued pressure on networks versus the pre-pandemic period. 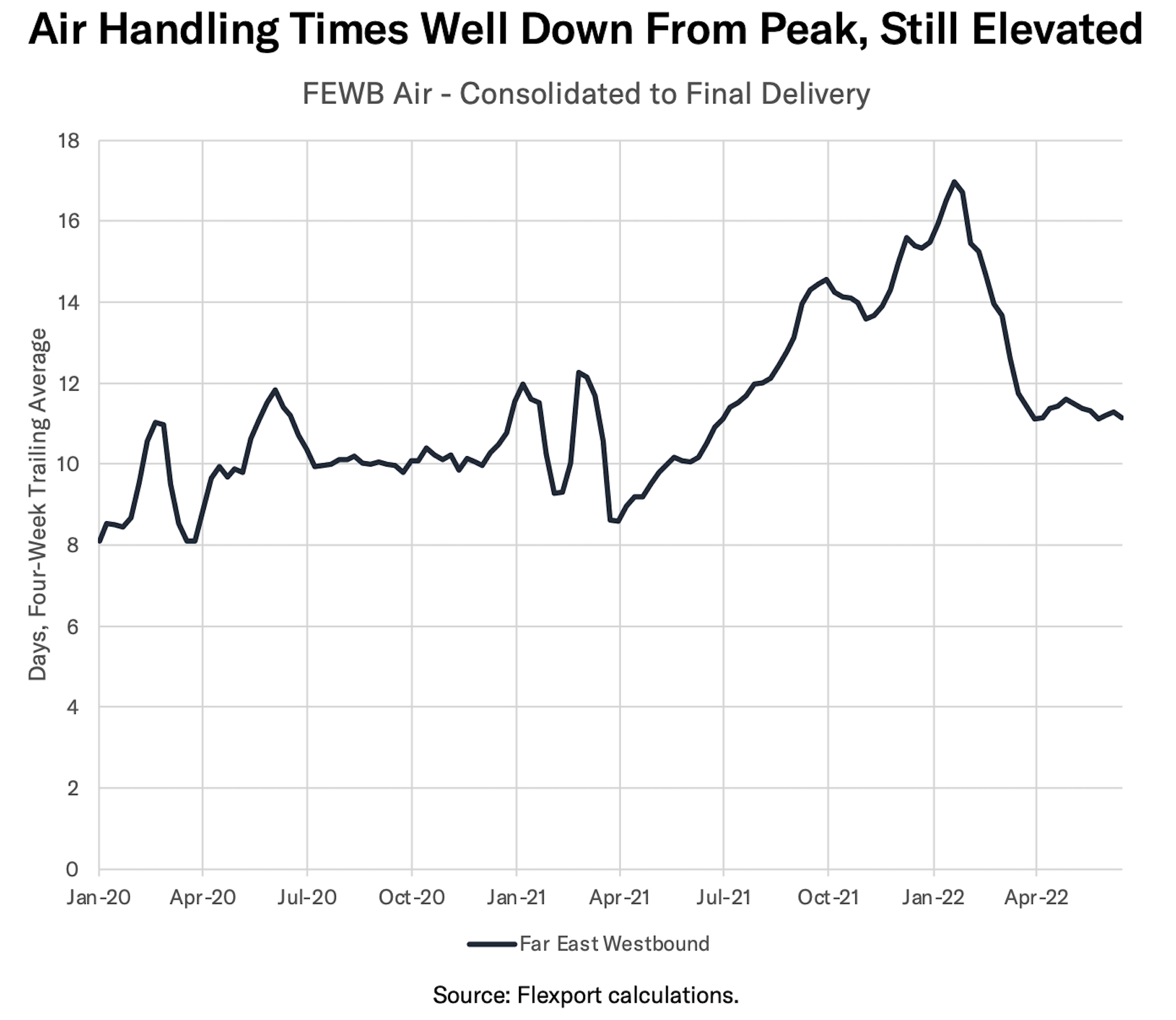 Air Freight Handling Times (Updated June 21, 2022): Flexport’s Air Timeliness Indicator for Far East Westbound (FEWB) routes for air freight from consolidation in Asia to final delivery in Asia has held steady at around 11 days since the start of April, measured on a four-week trailing average basis. That’s well down from the January peak of 17 days but still well above pre-pandemic level of 7 days.

There’s been little change in flight times, despite disruptions caused to long-haul routes resulting from the conflict in Ukraine, with ground handling and delivery being the main constraints. The outlook is somewhat uncertain given the recent lockdowns in Asia and rising industrial action risks in Europe.

Bringing it Together: The Flexport EU Logistics Pressure Matrix

The Logistics Pressure Matrix is colorized in 10 grades from red (measure represents high pressure on logistics networks) to green (low pressure) relative to the period from January 2019 to date. So, falling retail sales tends to be “green” as it represents reducing demand pressure on logistics networks while a high level of deflated imports would be “red” in indicating elevated flows. 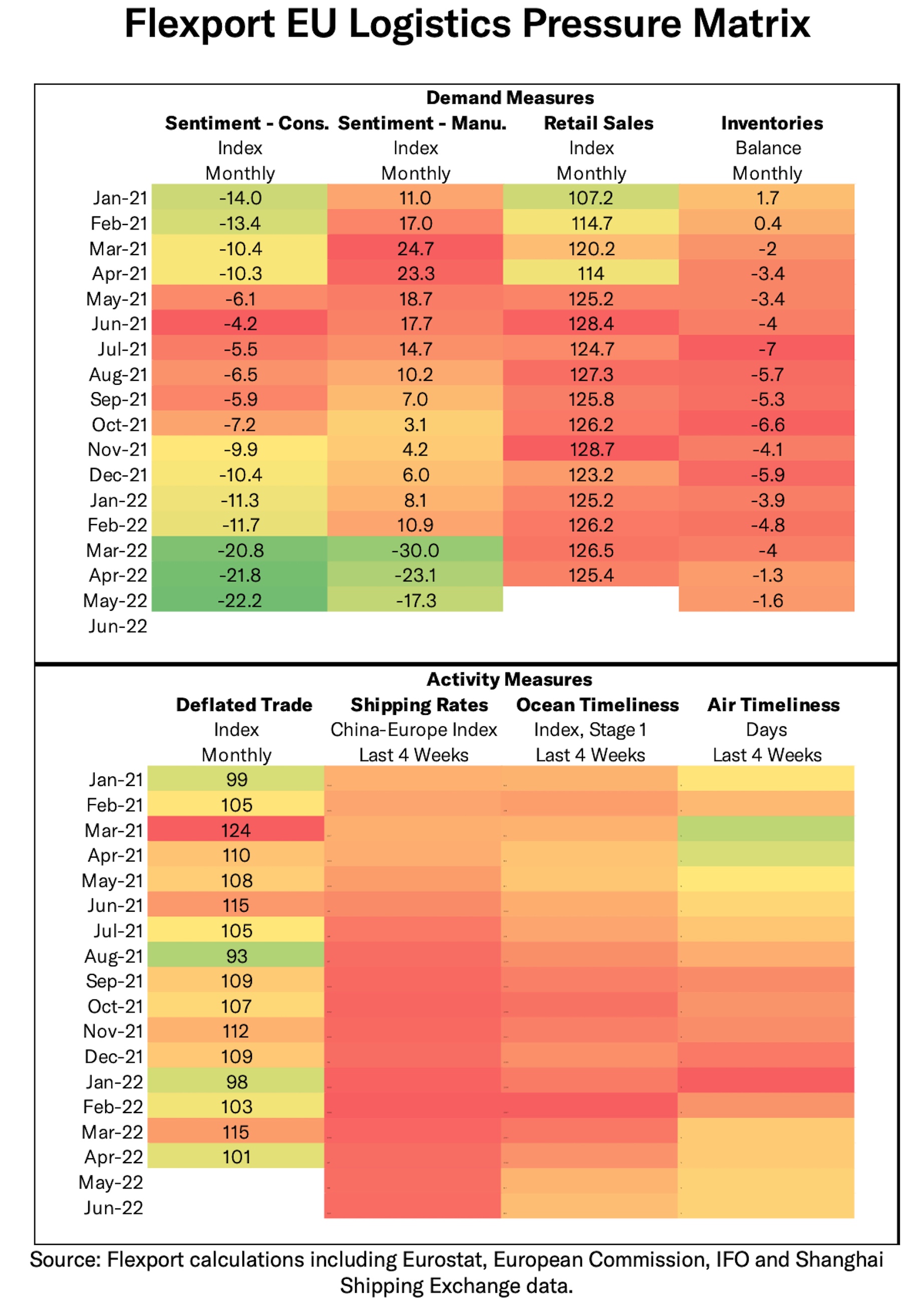 The matrix above shows the sentiment indicators, which provide a guide to future behavior. They suggest less pressure on networks, though retail sales have yet to drop to pre-pandemic levels and inventories are still not fully refilled.

On the activity side, the deflated trade activity (which includes non-containerized sea- and air-freight) is steadily returning to pre-pandemic levels, suggesting reduced pressure. Yet, shipping rates remain elevated and logistics timeliness remains worse than the pre-pandemic period.

In conclusion: The fundamental drivers on European logistics demand from elevated demand for goods are steadily alleviating, though indicators of the cost and timeliness of shipping suggests networks are still under considerable pressure.