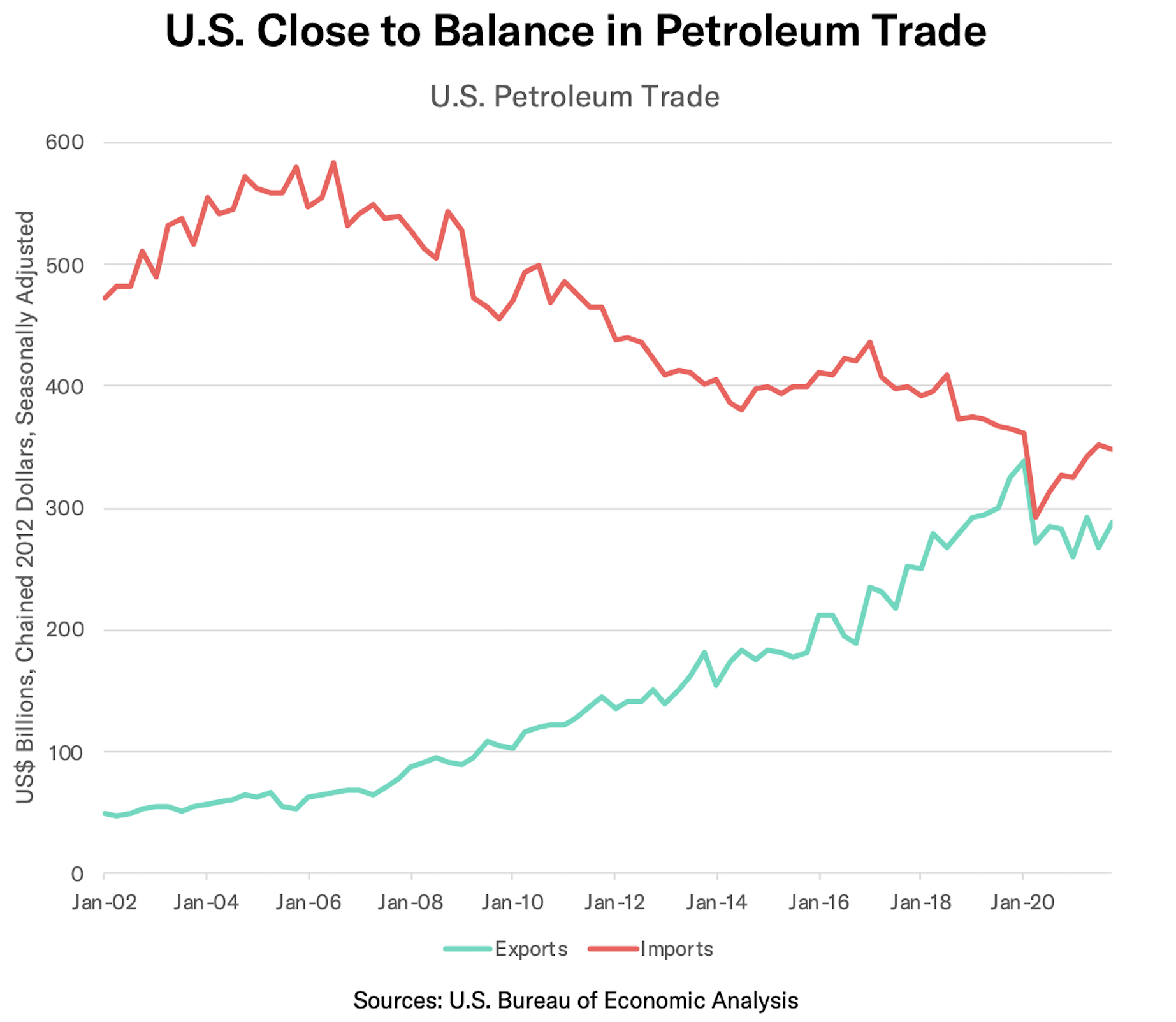 In times of high inflation, it is important to look at what is happening in real terms (adjusting for inflation) and compare it to nominal results. The real figures in the report refer to goods trade only (not services), so for a proper comparison: a 15.8% nominal increase in YOY goods exports corresponded to a 1.3% real increase; a 20.0% nominal increase in YOY goods imports corresponded to a 9.2% real increase.

Sticking with the real comparison of January 2022 and January 2021, the biggest category movers for exports were consumer goods, up 15.4%, and Foods, Feeds & Beverages, down 15.7%.

For imports, the biggest YOY real category movers were consumer goods, up 12.3%, and capital goods, up 12.0%. Following close behind were industrial supplies, up 9.3%, which includes petroleum and petroleum products.

Petroleum and petroleum products make up a significant portion of U.S. trade – 8.7% of total exports and imports in 2021. The sector is drawing particular attention as oil prices swing dramatically amidst the conflict in Ukraine and sanctions on Russia.

The graph above shows, in real terms, how U.S. petroleum trade has evolved in recent decades. While the U.S. remains a net importer, the gap between imports and exports has narrowed dramatically, almost closing at the onset of the pandemic. For petroleum alone (excluding products), the U.S. was a net exporter in 2020.

One might ask why the U.S. both imports and exports petroleum. Why not just net it out? The answer lies in the differentiation within the category – there are differences between crude oil, for example, and refined gasoline or propane. Shipping costs and regulations can also play a significant role.

As a general rule, a country benefits when the price of goods for which it is a net exporter rises. This says nothing, though, about the distribution of those benefits. For those who are not oil producers, the high prices of oil for heating or of gasoline are an unmitigated pain.

For our best, updated estimates of what will happen next for U.S. imports, see the updated Trade Activity Forecast to be released later this week.

Chinese Producer Prices Rise by 8.8% in the year to February. That was below the January rate of 9.1%.

European Central Bank Policy Shift. The ECB announced that it would phase out its bond purchases sooner than anticipated and could raise interest rates later this year. The conflict in Ukraine means that the ECB may simultaneously have to deal with an economic slowdown and rising inflation. The announcement seemed more focused on the latter.

MFN Withdrawal from Russia. The Biden administration and G7 allies moved to end Most Favored Nation status for Russia as a response to the conflict in Ukraine. The move would allow significantly higher tariffs on Russian products.